I just finished repairing some heavy damage on my steel and cast iron front gate. I'm ready to hang it again but I'm having a little trouble because the pillars on both sides have a slight outward lean. The lean existed before the damage, and I can't / don't want to really fix it, but since it was already a problem pre-damage (the latch never engaged properly) I'd like to improve it while I have the chance.

I've exaggerated it in this drawing: 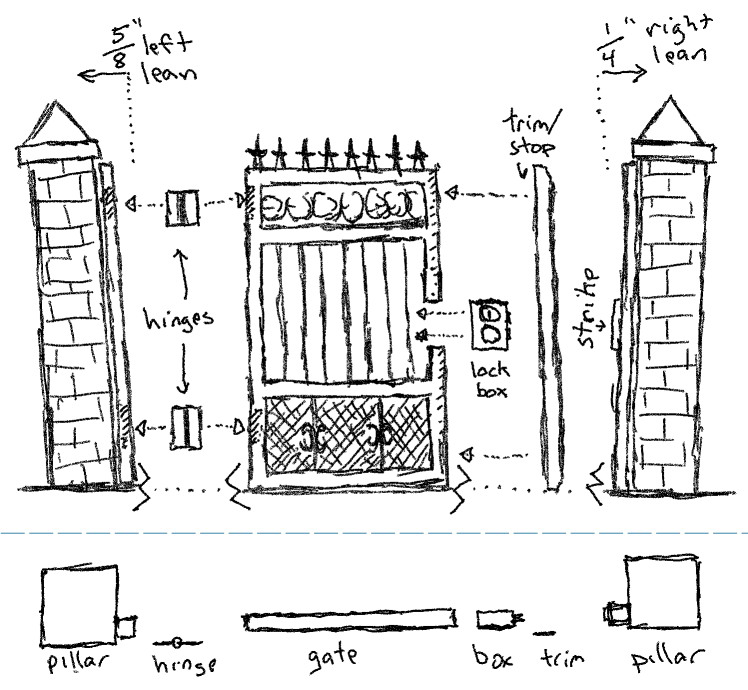 A top-down view is at the bottom to hopefully clarify.

I'm welding it all back together, so I'm flexible with component positioning (including mounting the lock box [this] at an angle if necessary, and the strike plate position and offset).

The gate is left-handed reverse, the current trim / stop piece is about 1-1/2" wide. The posts are 2x2" square tube, the gate frame is 2x1" square tube.

The pillars are roughly 2'x2'.

I'm having trouble figuring out how best to mount this gate. My goals are pretty evenly spread between:

So my question is; is there anything I can do to achieve all of those, or at least a good compromise?

If I could straighten the pillars I would, but they're crooked due to settling over the last 80-90 years (this is a brownstone in the city), and it's affected by neighboring structures. The masonry work on the pillars is in great condition, the crack from settling is on the ground directly centered between the posts. That's a long way of saying those pillars aren't budging at all.

The posts themselves also aren't going anywhere. They're bolted into the pillars in multiple places and also the bottoms are set 3" or so into the concrete floor. Straightening those isn't a project I feel comfortable taking on.

What are my options here?

If you can't straighten the pillars by mud jacking as Sherwood suggested, I'd suggest embedding rods into the pillars, then attaching the jambs (your 2x2 posts) to those and getting them nice and vertical.

Once the jambs are vertical, it should be a piece of cake to attach the hinges and strike plate so your gate is centered, vertical, and balanced.

Trim out between the jambs and pillars to hide the angle. You don't indicate the height of the posts/gate, but 7/8" split evenly (7/16" per side) should be reasonably easy to hide if the gate is door height (7' or so). If it's shorter, it will be more obvious, but there's only so much you can do.

A: Do it so it's adjustable.

B: My first thought is to hang it so the gate is level. This would require that the gate NOT be centred since you have more lean on one side.

C: Once the gate is level, then add trim pieces to hide the wedges of space.

Have you checked out mud jacking? This is used here to relevel driveways, sidewalks and front steps. In essence they excavate a hole under the object, pump in a grout, or foam. See: https://en.wikipedia.org/wiki/Concrete_leveling

Take 3/4" stock and put a long standard thread for 3" on one end. Bend the other end in a right angle.

Get joining nuts (Like a regular nut, but 3-4 times as long. Used for joining two pieces of threaded rod.)

Set the nuts into the holes with epoxy. Put the threaded stock in and get them level.

On the gate side weld two short pipes with 3/4" id openings.

Adjust the threaded stock so the angles are pointed up.

Set the gate down so the pipes go down on the stock.

Adjust by screwing/unscrewing the threaded stock. (You have to take the door off to adjust.

If you wish you can sand a bit off where the pipe meets the inside of the right angle. This will give a gate that tends to stick a bit at the middle of the swing.

If you leave a bit more play in it (use 7/8 ID pipe) and make the lower pipe closer to the pillar then the gate no longer has a vertical hinge. Opening it raises the gate as it pivots. This makes a self closing gate.

1
What height concrete gate posts do I need for a 4 foot high gate?
0
Square tube or C-channel for gate frame
4
How do I hang a new wooden gate so that it automatically stays closed when it is shut but also stays open at its maximum open span?
0
How do I fix a plastic gate that will not close when hot?
0
Is my plan for mounting a child safety gate feasible?
1
How to repair this hefty wooden fence gate?
1
Deck Gate design for offset posts
0
Fixing broken wrought iron gate
0
Best way to reinforce double-gates for high winds?