However, after seven or eight years of reliable service, this mechanism in the primary door has suddenly failed with the latch pins extended. The net result of this failure is that I can no longer open either side of the French door. Aside from the obvious inconvenience of a door that can't be opened, this also appears to block the access to the latch mechanism I would use to repair it.

I've tried removing the inside and outside door handles, but that didn't appear to provide useful access. I've also put lubricant in the door latch mechanism, but that doesn't appear to have freed anything up. Because of the structure of the hinges, there is also no good way to take the door off the hinges. I can get the hinge pins out, but the door can't get past the hinge.

Aside from drastic measures to pull the whole assembly out of the wall, are there any good techniques for dealing with this situation? Thanks in advance.

This is an overview photo of the door. Both doors have latch pins extending upward and downward into the door frame. These are extended and retracted by the latch mechanism and this is what is failing: 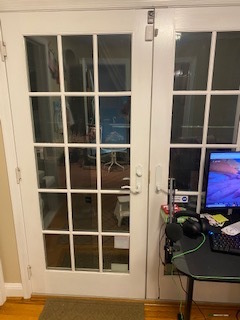 This shows the latch pin extending upward into the door frame. 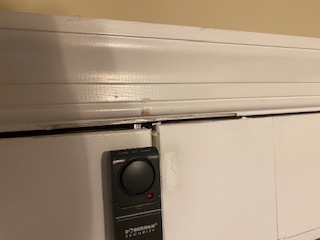 This is the main latch mechanism. Not much to see here. Anything more interesting is on the edge of the door, which is what I cannot get to. 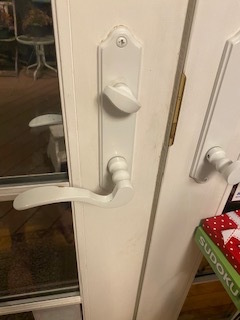 I lowered the handle as far as it would go and then with a small screw driver pry the pins up / down to fully retract the locking mechanism. That would be your pin in picture #2 and the one that goes into the floor.

I was not able to find a replacement that would fit, but was able to fix the broken piece.

Not the answer you're looking for? Browse other questions tagged doors latches or ask your own question.

9
Why does my latch not retract when I push or swing the door shut, but will retract when the knob/lever is used?
5
What would cause my door to not close even though it fits in the frame?
13
How do I shift a door's latch hole and strike plate up or down half an inch?
4
How do I fix a door that's sticking closed?
1
Please advise how to lubricate stiff latch bolt of mortise lockset on metal exterior security door. (NOT the pins in the keyway!)
10
What is the proper name for a solid French Door?
0
How do prevent door from swinging open
1
Latch won't retract into my door unless I turn the knob
0
Where can I find handle-operated flushbolts for French doors?