What is this coving profile?

This coving is all around my house, but some needs repair and I can't match it.

It's a "C" profile with a lip at the bottom. I thought perhaps the lip was a separate picture rail or something, but it is all one moulded piece (plaster). 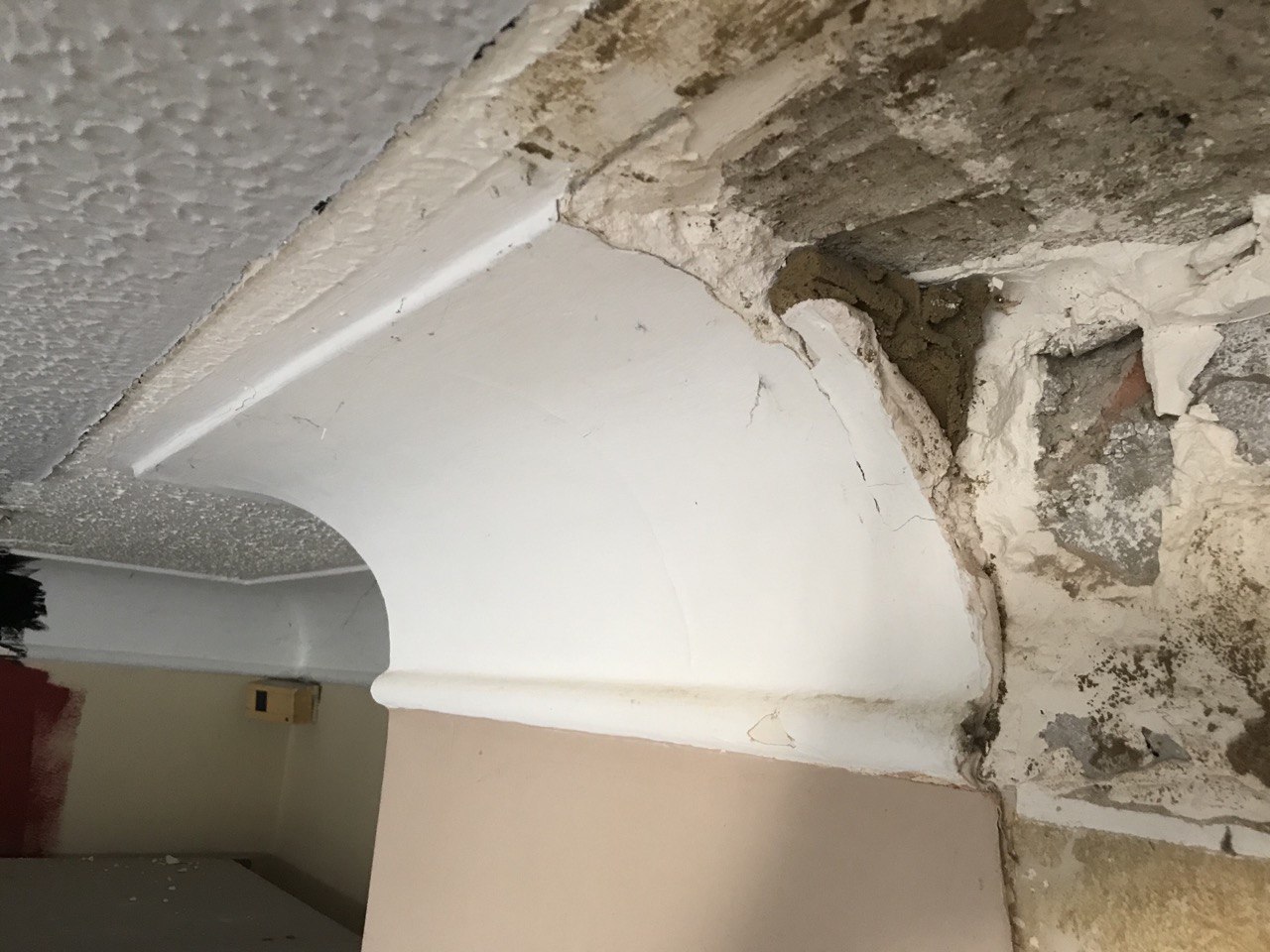 Does this profile have a name? I am based in the UK.

I would call that a "cove with bead". The main part is a simple cove, and there is a bead added at the bottom for a little extra detail.

To make the repairs, you would have to duplicate it in plaster. You would cut a template, pour plaster into a trough to hold the corner shape, then use the template to shape the exposed surface of the plaster to match the existing molding. Once the plaster has hardened, you have to "glue" it to the ceiling with more plaster. You'll probably want some sort of specialist to do this for you as it's not particularly easy, especially as a first project in plaster.

As an alternative, you may be able to find a matching cove and bead in wood or polystyrene (as it seems someone has done). These would be much easier to install with simple finish nails and a bit of filler over the nail heads.

A third alternative would be to find just a matching cove, then add a matching bead. If installed carefully, nobody would ever see the joint between the two (the joint would be above the bead and you'd have to have your head where your camera was in order to see the joint, so it wouldn't even have to be super tight). Again, wood or plastic would make for an easy installation.

I already accepted an answer for this, but I thought I'd post back because what I've learned since may be of help or interest to others.

After cleaning up the damaged coving and chipping off the wall plaster, it seemed more apparent (as some commenters suggested) that this coving was made in situ. In fact, it seems as though the plaster of the coving was the same continuous layer of finishing plaster as was on the wall. You can just about see below how it sits on the bonding coat. 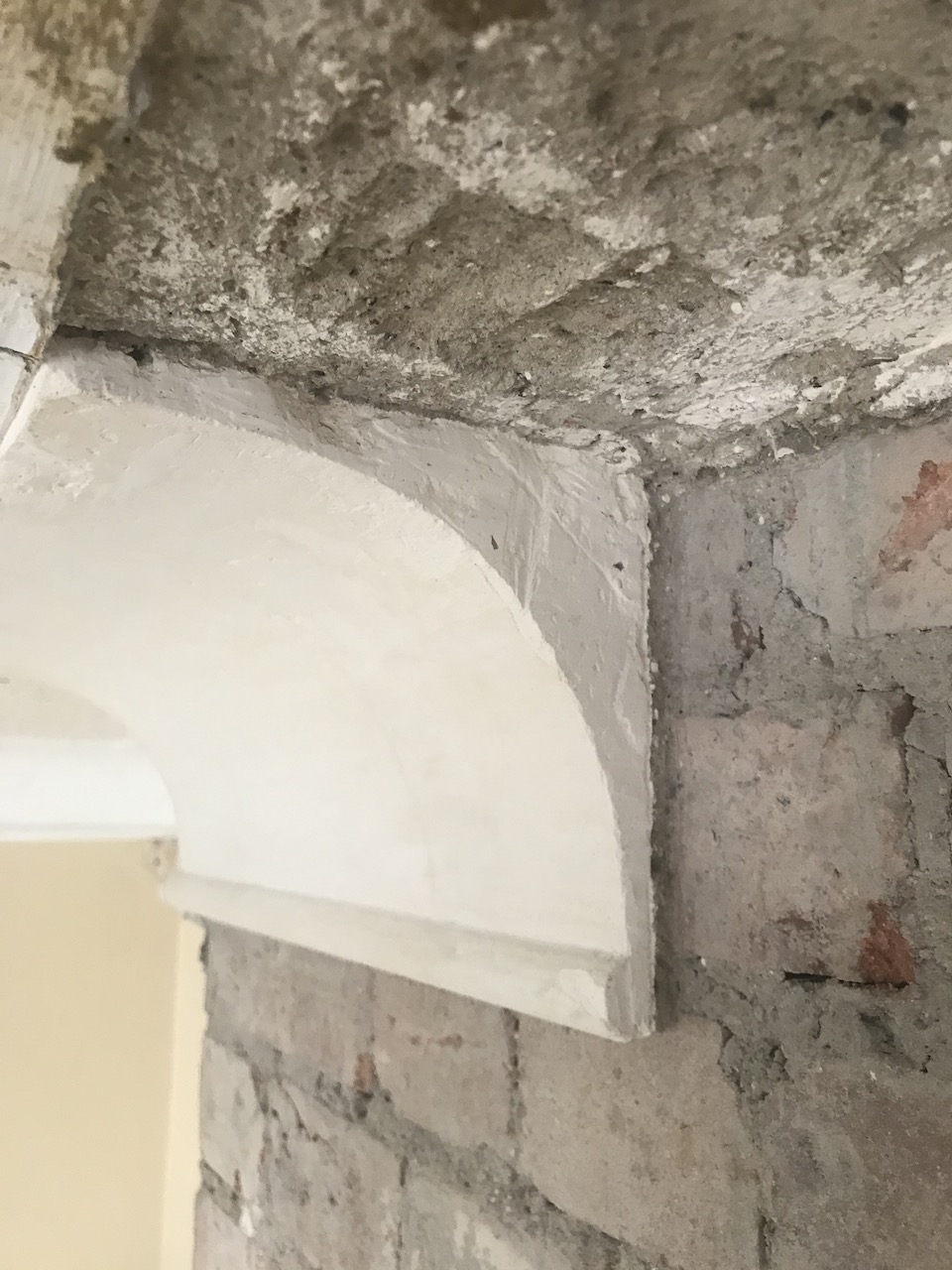 After plenty of Googling I learned that the cove was probably not so much cast as sculpted using a running mould. There are some amazing videos of people doing this on YouTube. https://www.youtube.com/results?search_query=running+mould

I didn't fancy doing this in situ, but I found various videos of people using the same technique to create sections on the bench. Inspired specifically by this video I decided to give that a try.

Making the blade that scrapes the plaster is worth some attention. It was the most time consuming part and essential to get right. Here's a good video of that whole process: https://www.youtube.com/watch?v=rlH_vMc6yTE

I read that zinc is a good material for this, but I ended up using 0.5mm aluminium which is way too soft and flimsy for extended use. However, having very limited metal working tools this did allow me to cut a half-decent blade with tin snips and file into shape; finally smoothing down imperfections with 240 sand paper.

I won't post all the details of my ugly contraption, but I ended up with this. 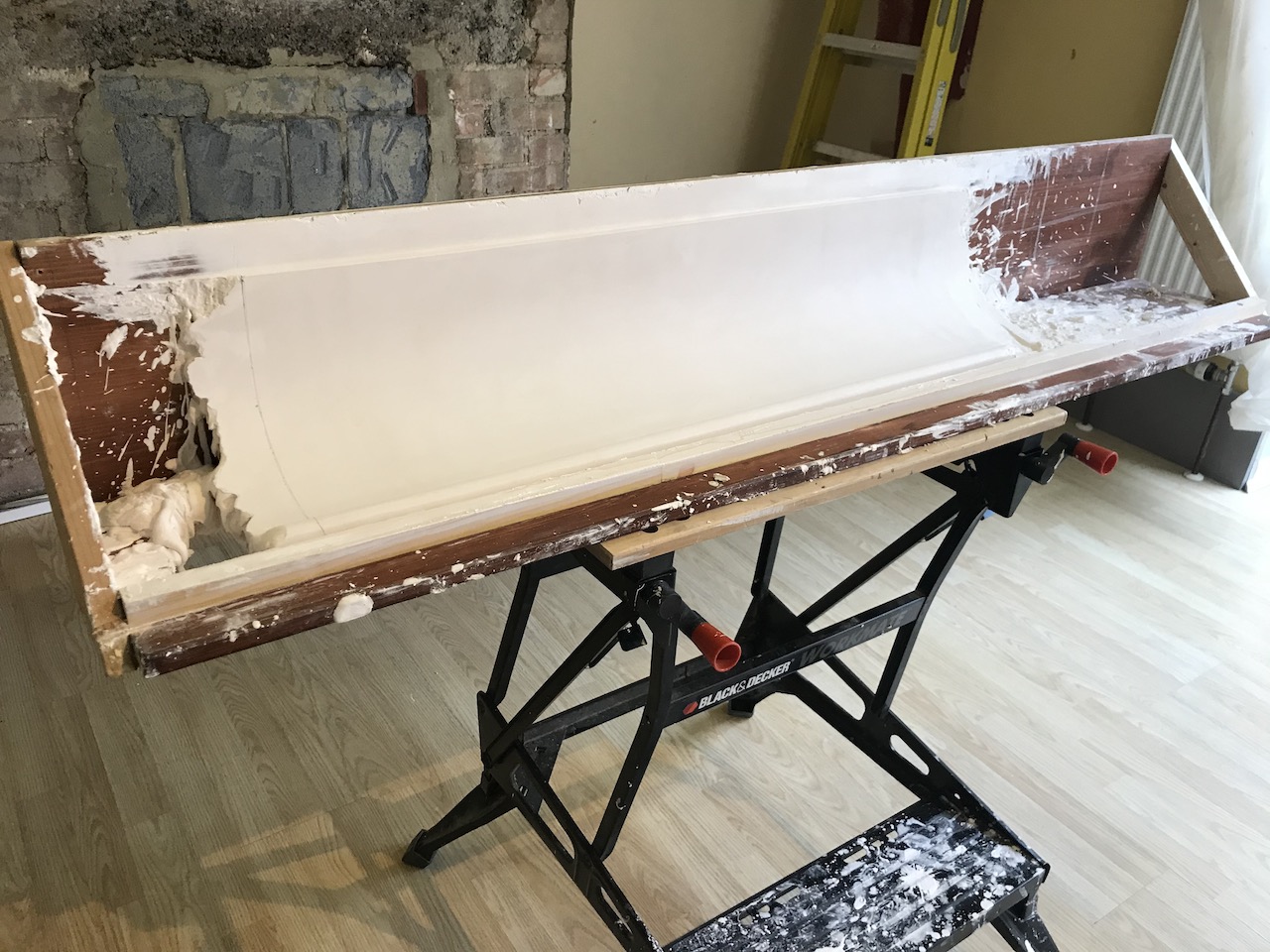 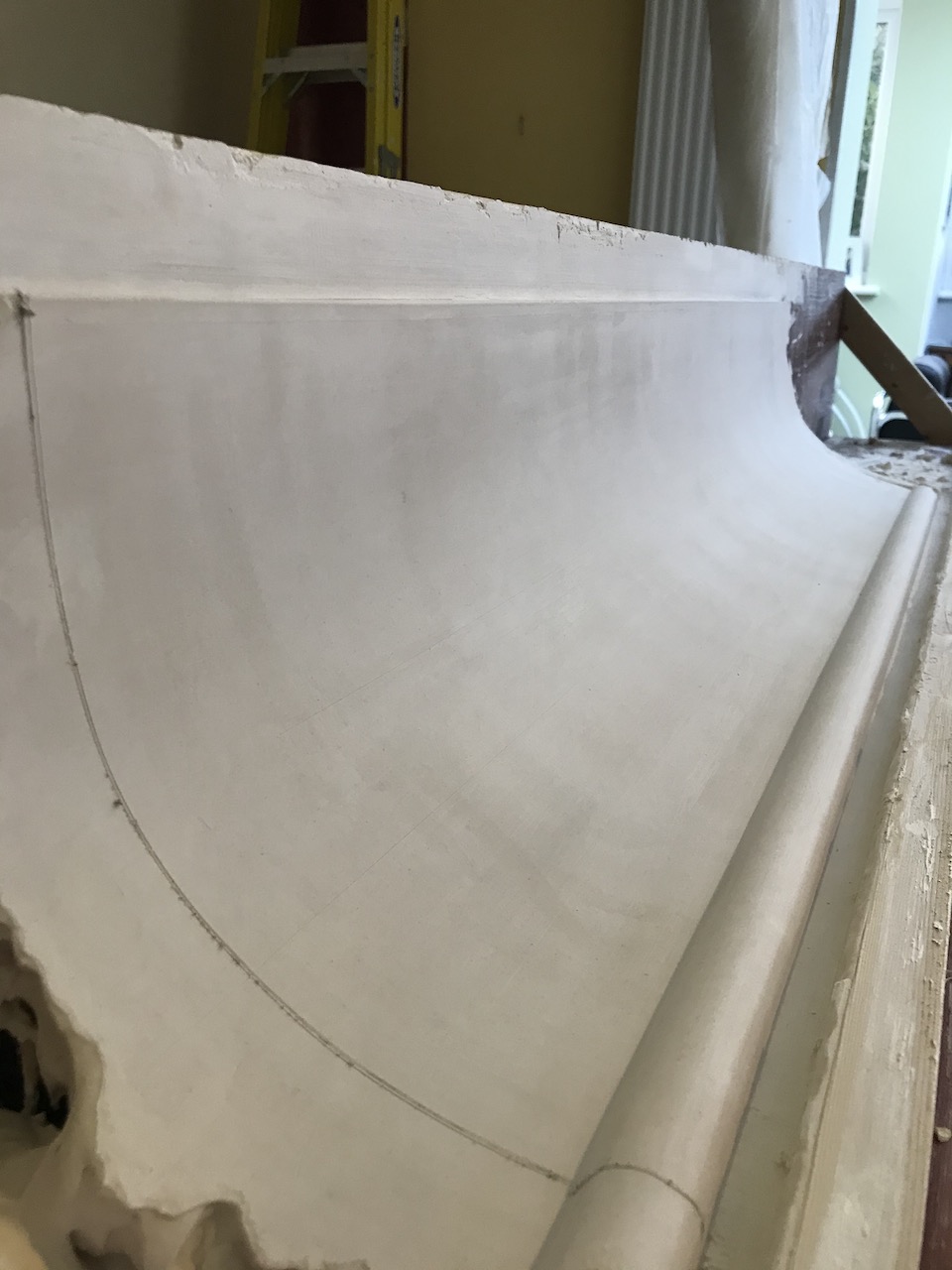 It took 6 or 7 fairly thin coats of plaster of paris. The trickiest part was mixing small batches of plaster quickly between coats before the plaster could set on the mould. Plus also keeping the blade and running track clean between passes. I want an assistant next time as this was surprisingly exhausting.

Other notable details are that I added a layer of hessian at the back for strength. A curve of wire mesh would have been better (as in earlier video) but I was doing experiment no.1 on the cheap. Also, thanks to commenters in this related question, I used washing up liquid as a release agent.

A hollow back was created by putting a right angle bead at the back of the casing. This made the section lighter and used less of the fairly expensive plaster too.

Here's the final product out of the mould. I haven't glued it into place yet. That's for another day. 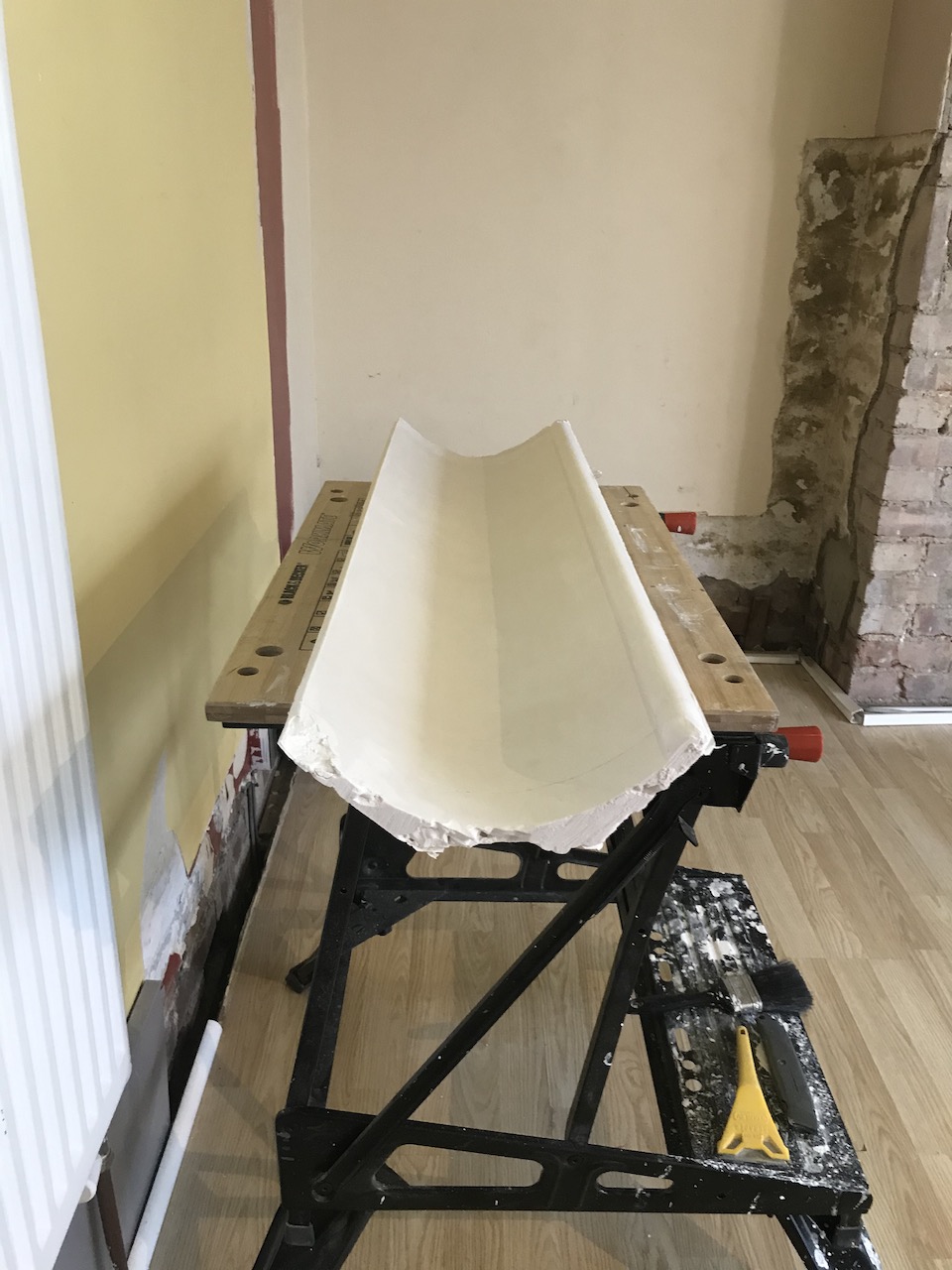 Do a search for "crown molding" on your computer or go to the orange or blue big box stores or any lumber store. If you can, when you go to a store, take a piece of that molding to match what they have..

Not the answer you're looking for? Browse other questions tagged ceiling plaster uk or ask your own question.

3
How should I prepare a wooden mould for casting plaster of paris?

3
What should I do to make good on some lightly water damaged plaster?
1
What can I use to fill a 6-10mm gap between ceiling and front door structure?
2
Can I repair a plaster ceiling with drywall?
8
Is this plaster over gypsum wallboard?
2
What is this thing inside ceilling?
0
What to do with wall behind bath taps
1
Replacing Interlocking Ceiling Tiles From The "Wrong" Direction