How do I bleed a very old radiator and identify whether my system is steam or hot water?

All radiators are heating except one, so I'm trying to bleed it. There doesn't seem to be an obvious bleed valve (unless it's that nondescript, frozen, simple bolt on the top front corner of the left end of the radiator). I'm trying to determine whether my system is steam or hot water. I have read/viewed multiple online articles and videos, but this all seems inconclusive to me.

It's a two-pipe setup, with the apparent inlet at the top of the left end (this pipe is warm) and a valve at the bottom of the right end (this valve and pipe are cool). Pipe at top would suggest hot water (right?), but a plumber once told me my system is steam. I take statements like this with a grain of salt, however, since a contractor also once told me my boiler runs on heating oil when I know full well it's natural gas. Furthermore, the internet seems to say that a steam system's radiators will have air vents halfway up on one end of each, yet mine do not; and the valve styles are mixed (some are cylindrical while others are globe-shaped).

Since the radiator characteristics have not definitively answered this question, I also looked at my boiler. Here the apparent lack of a sight-glass and the presence of an expansion tank seem to suggest that it is — or at least was — a hot-water system. But if this truly is HW, then where are my bleed valves? And why did the plumber who once did work on the system tell me it was steam?

I think the boiler was originally oil but was converted to NG, so maybe the radiator system was converted from HW to steam? The house was built in 1920 and the boiler is old as the hills. Any help untangling this mystery is very much appreciated. 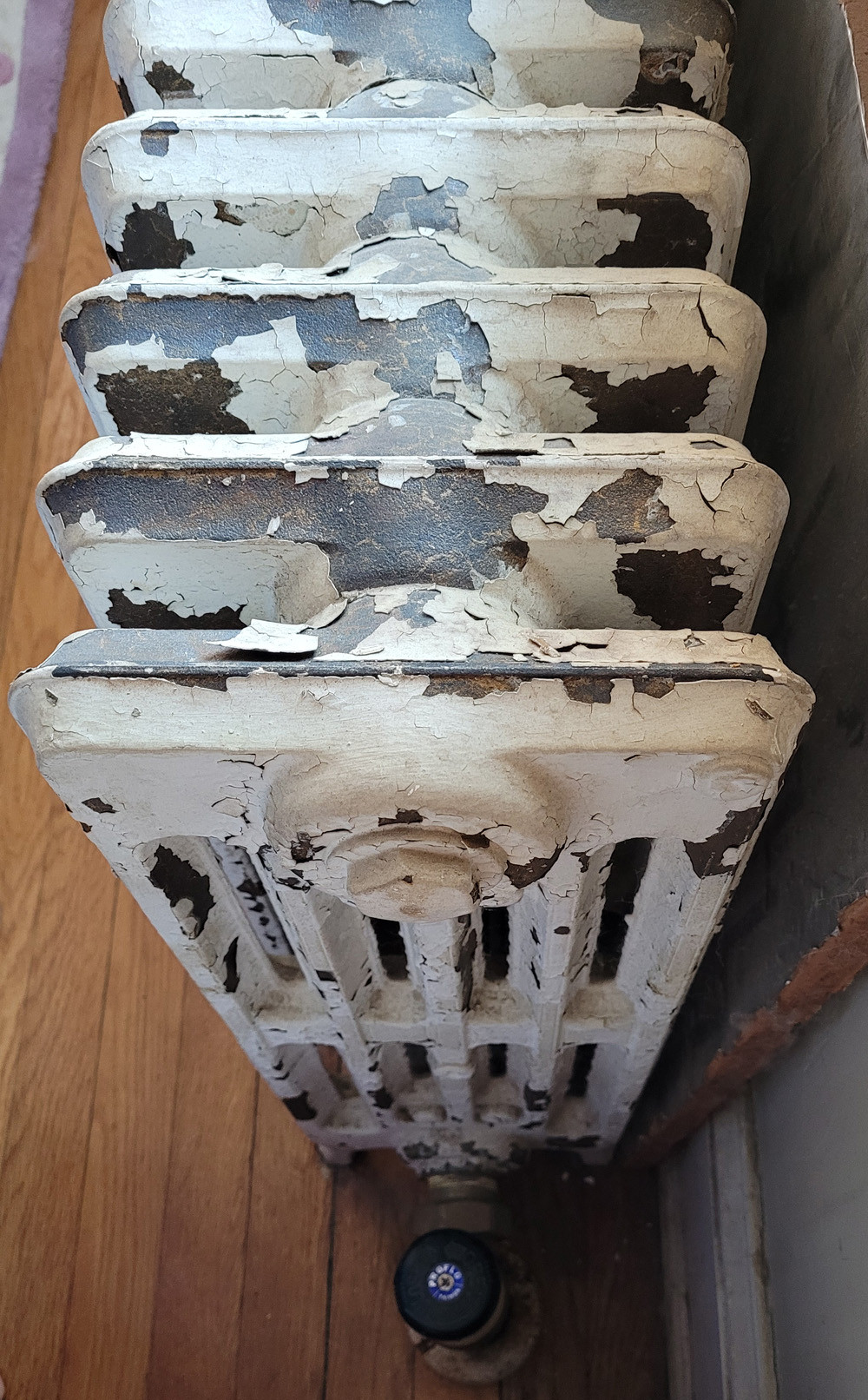 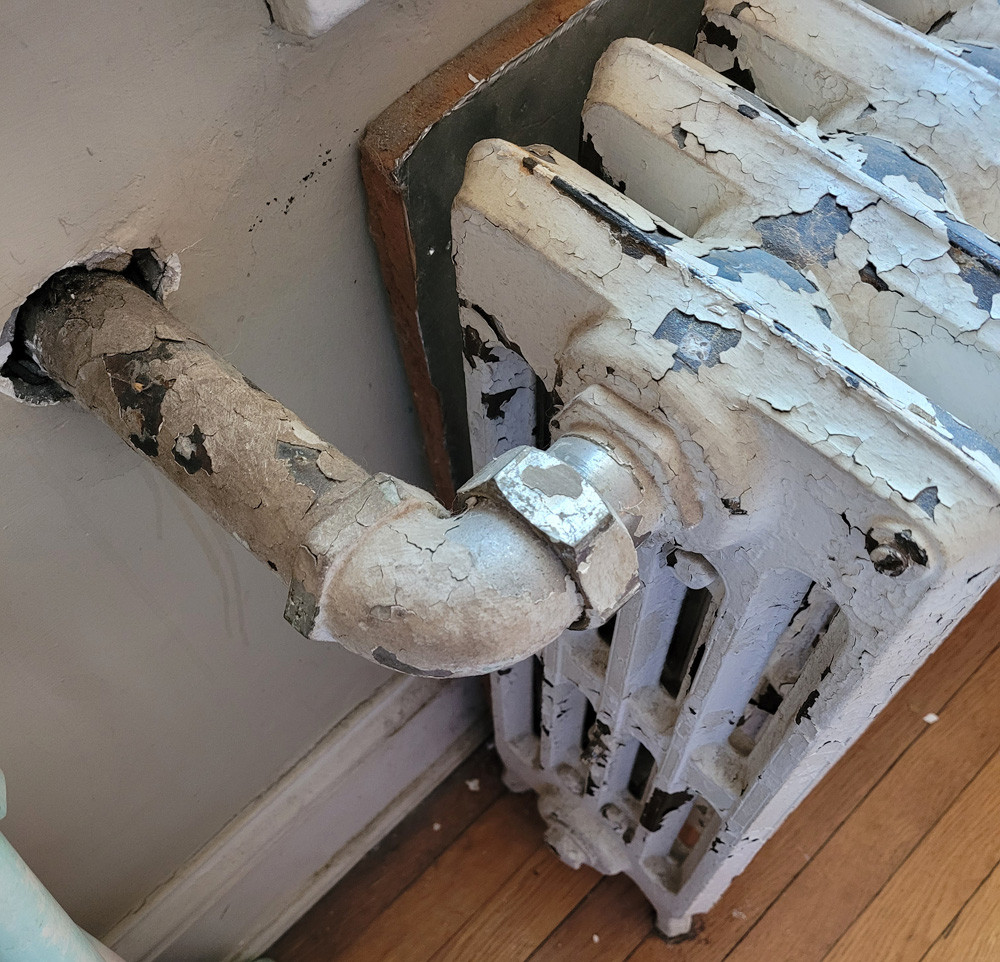 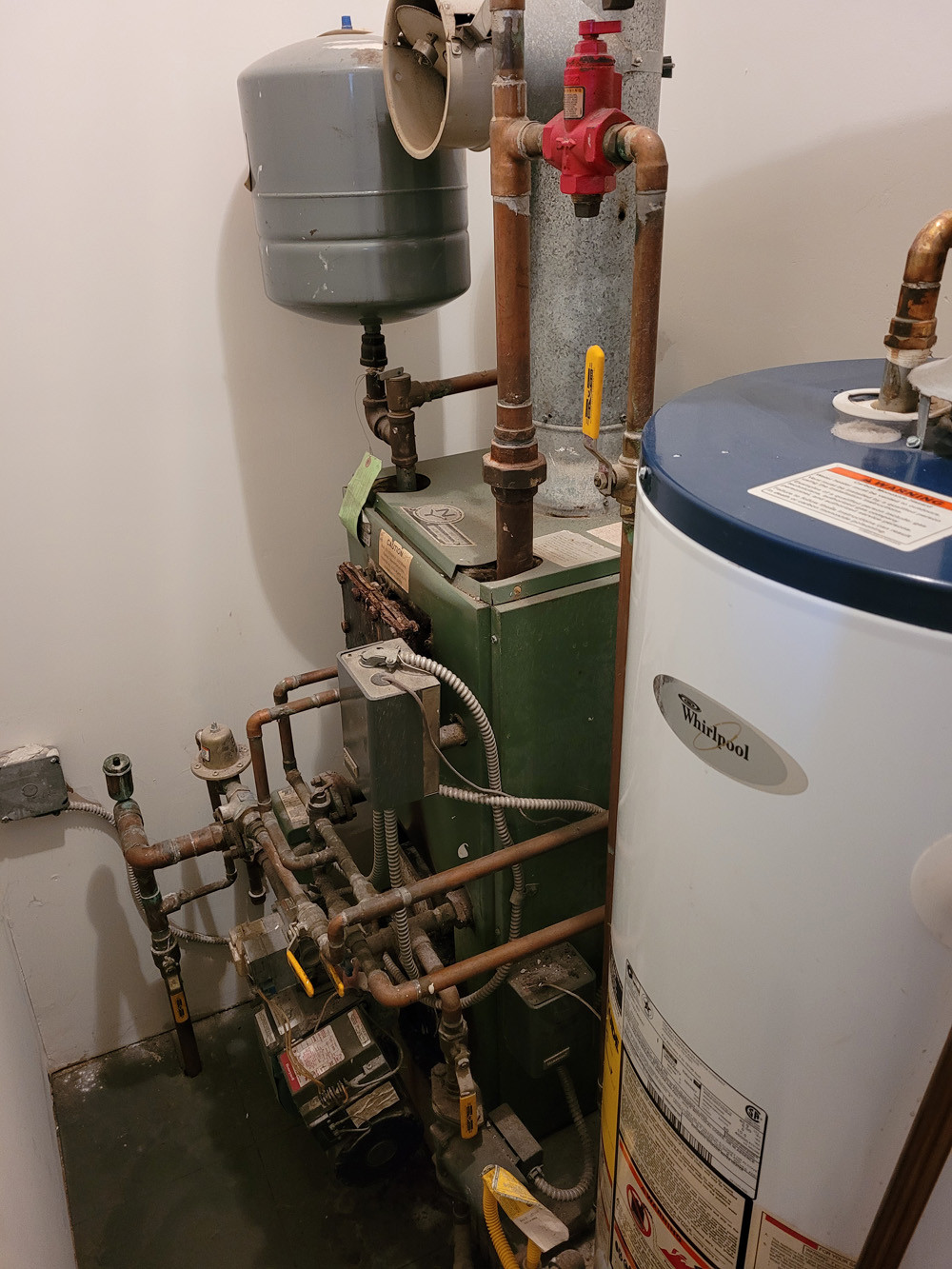 EDIT TO ADD: Here are a few close-ups. 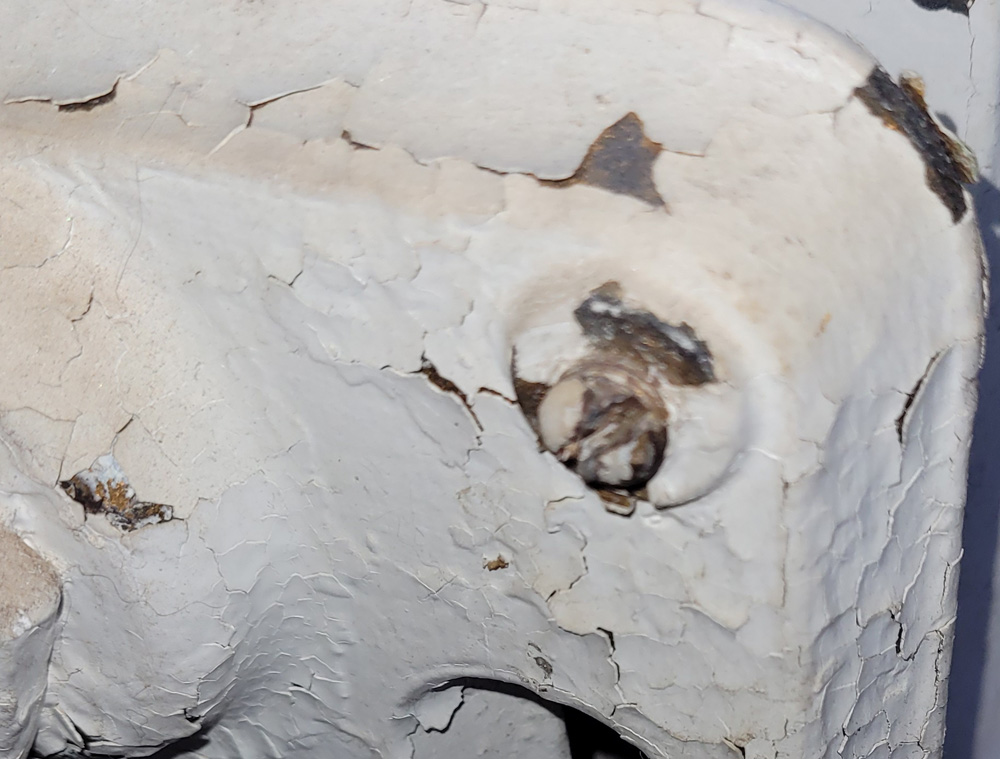 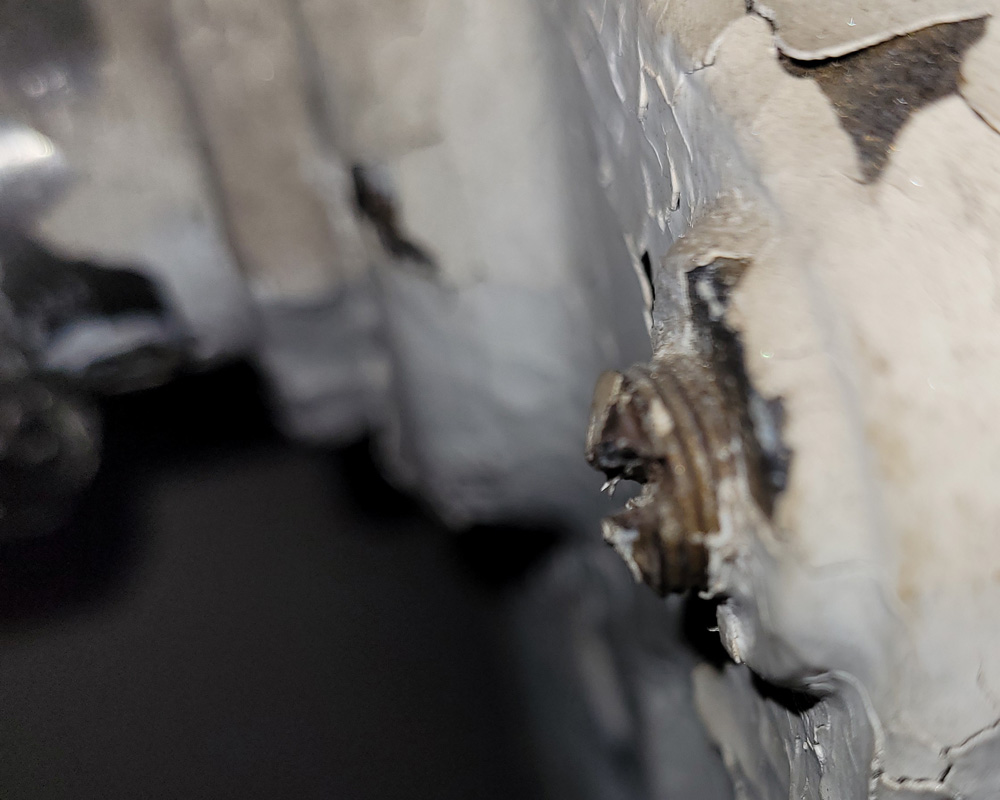 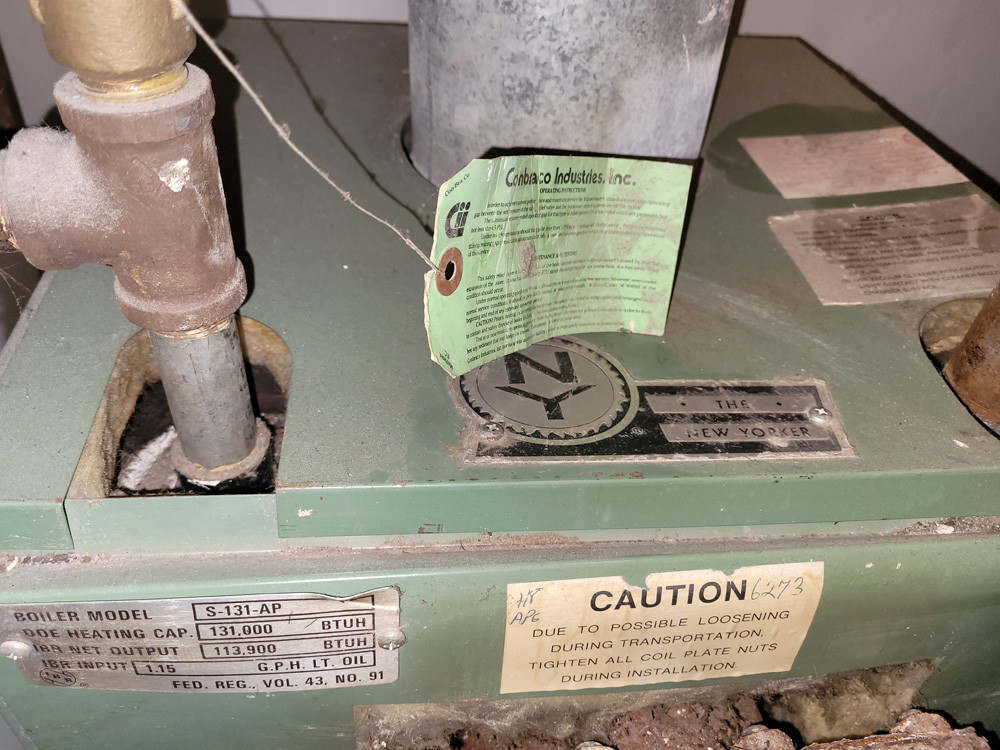 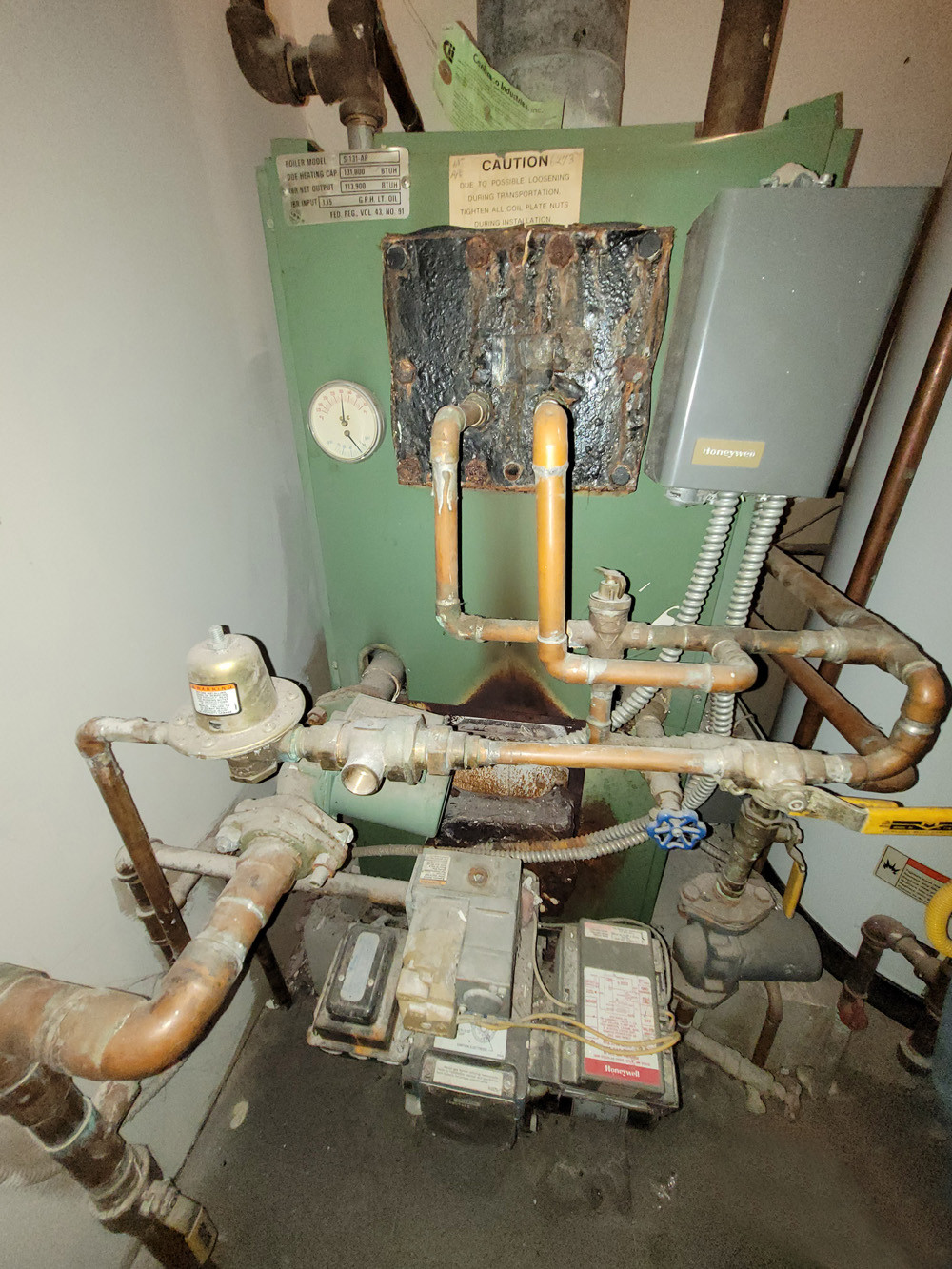 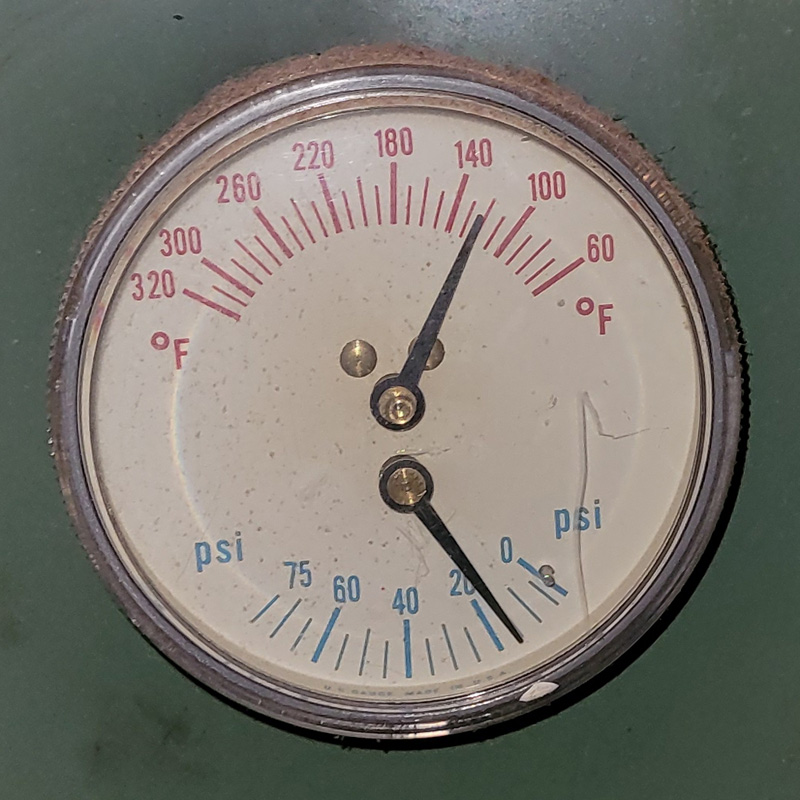 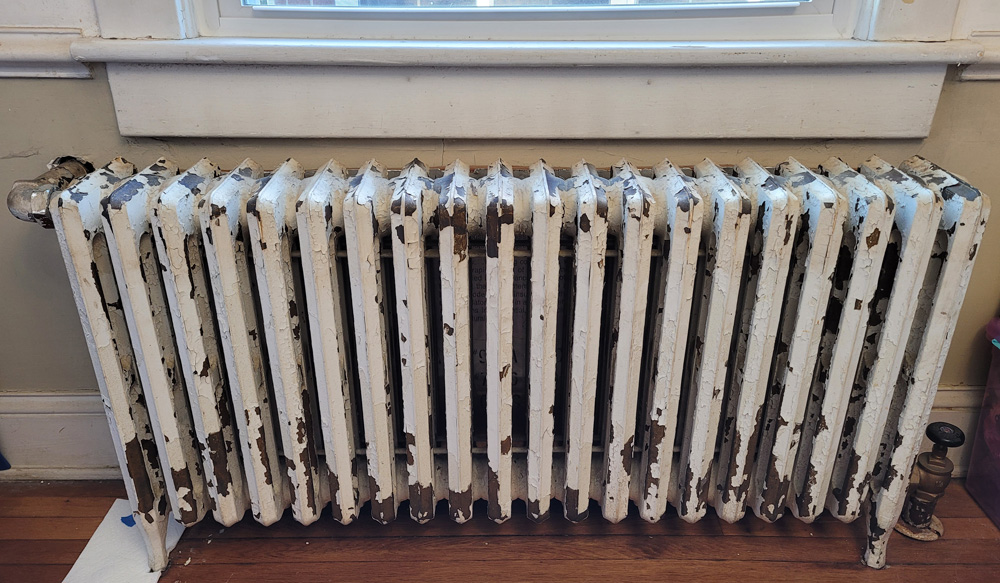 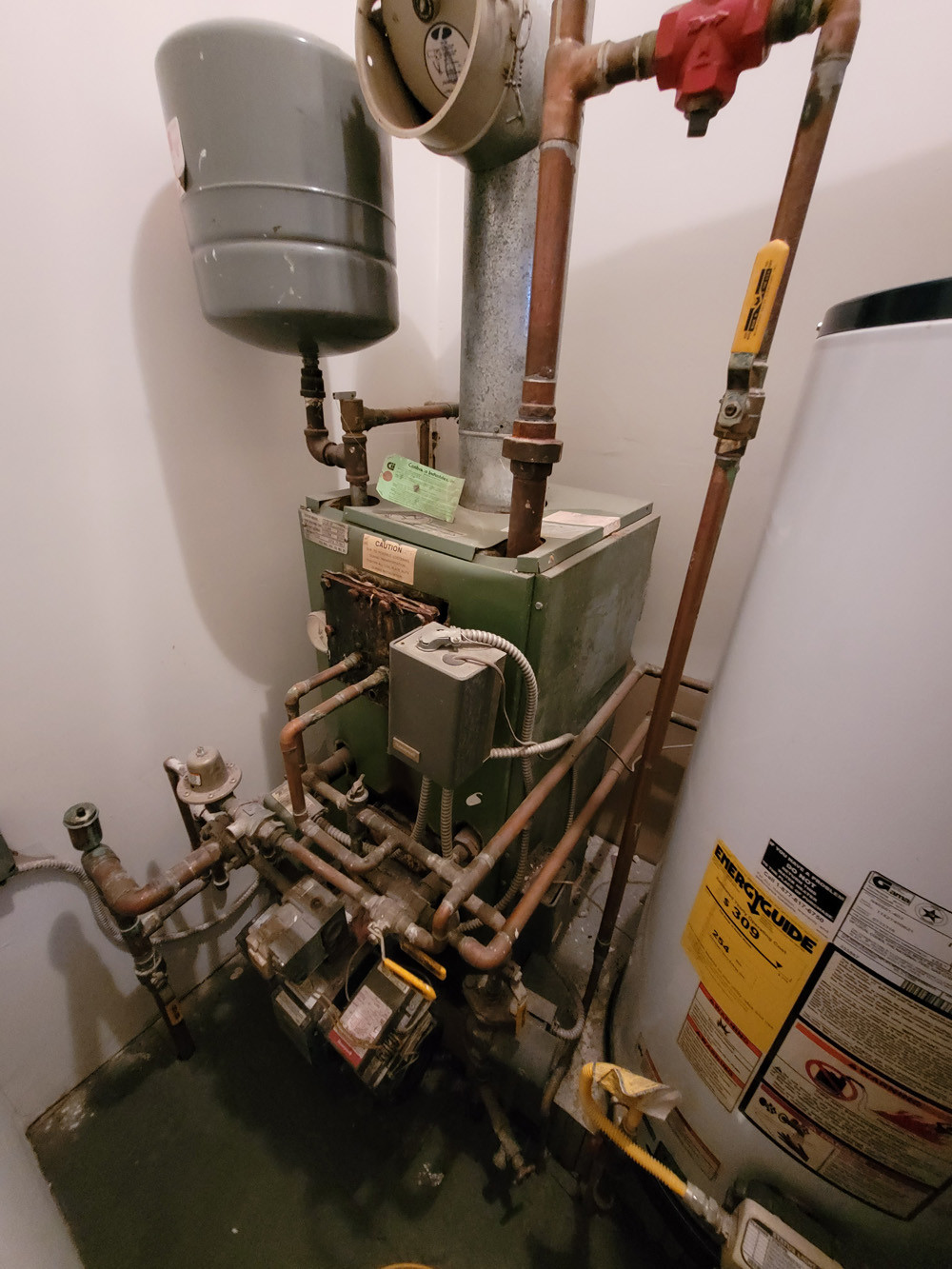 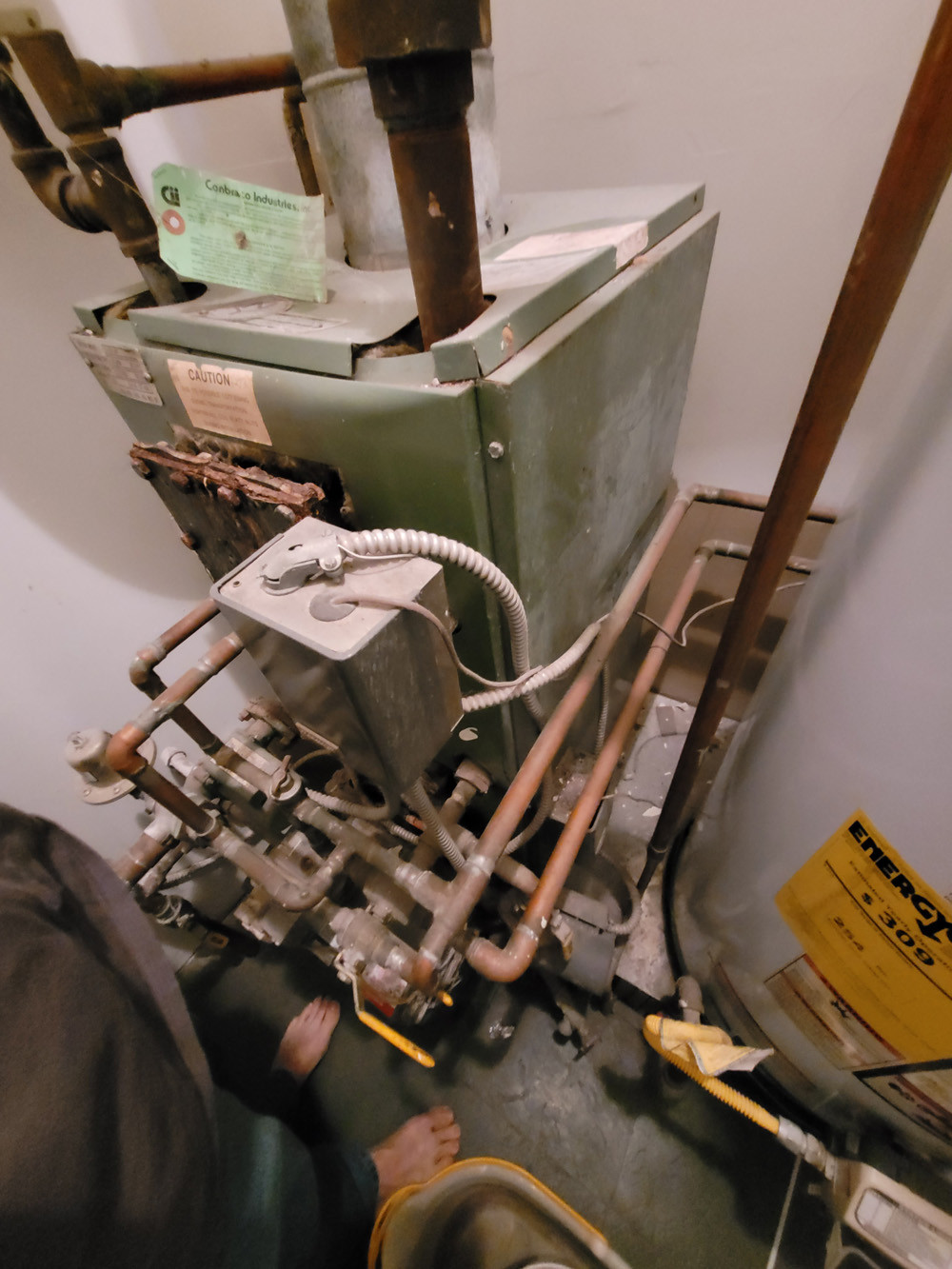 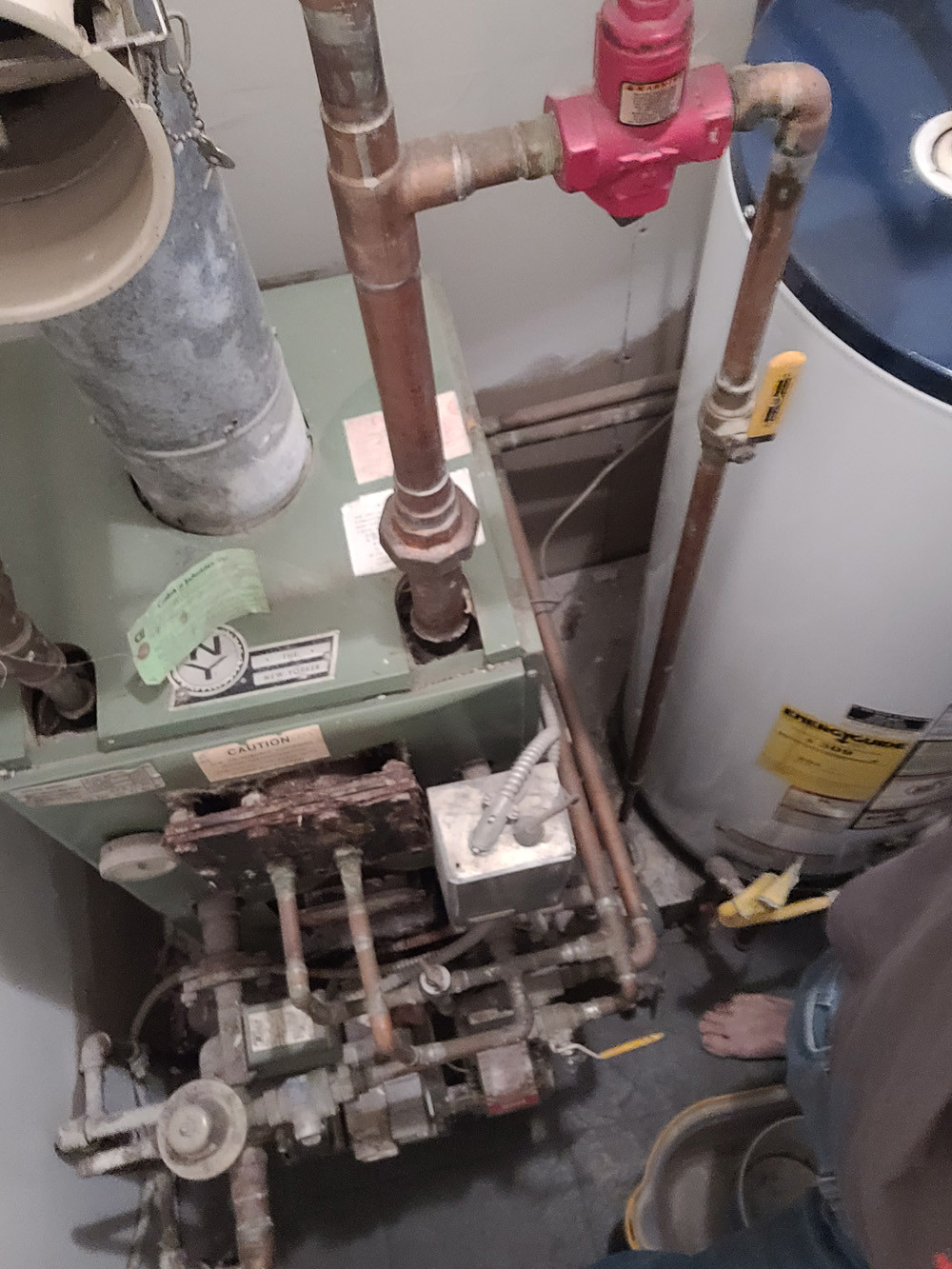 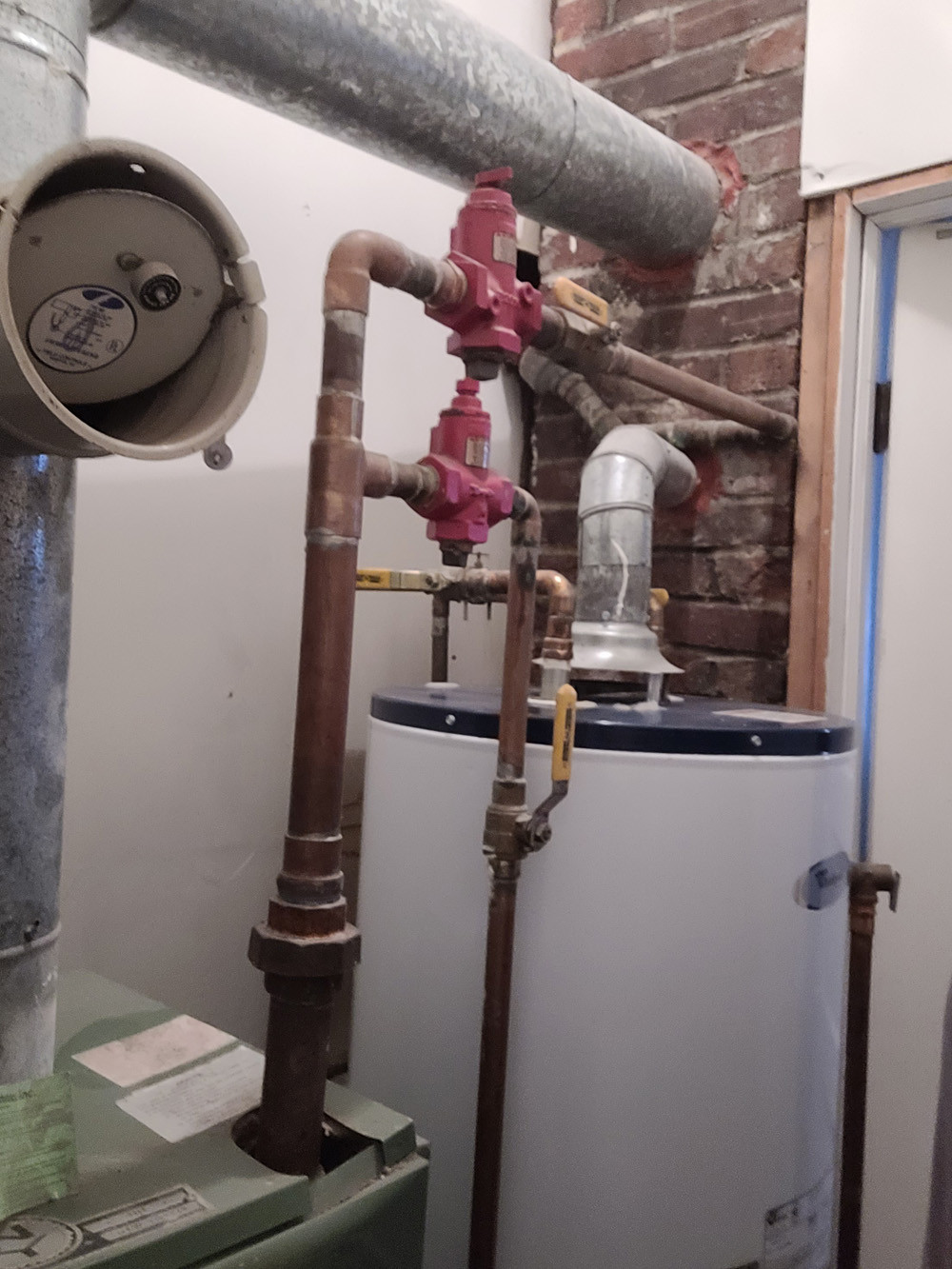 That's hot water. Not a great picture, but there's a circulating pump barely visible, as well as the other factors you have noted.

In your second picture, the bleed valve is the black thing to the right of the water inlet, on the corner. Takes a flathead screwdriver as best I can tell from the picture.

There's also at least one automatic bleeder visible at the boiler.

If you have children, you will want to clean up the peeling white paint, which is very likely to be lead-based.

First off, that is definitely a hot water heating system. As for the thing with the screwdriver head, do not remove it or try to loosen it. "IT is not a vent". It is a pipe plug. If you remove it you are going to get very wet. As for that boiler, it probably is not very old as far as hot water boilers are concerned. They last until they crack a section or casting which can be as long as 100 years or more. I have seen them last that long. Where is this boiler installed in the building. Is it installed above the radiation. Is it in an upper floor with the radiation below it. I ask because it looks like a down fed system and if it is, that may be why that rad does not have a bleeder or air vent. More information is needed as is a picture of the boiler and piping. (pull the camera back to expose more of the boiler and piping). Looking at the radiators, they look to be piped as a down feed system with the top pipe as the inlet and the valve at the bottom the outlet.

A bit of education, the only difference between using the boiler for steam or hot water in boilers of that design is the boiler's trim. This type boiler can be either steam or hot water depending upon the trim used. Also they can be fired with your choice of fuels, any oil or any gas.It depends on the burner installed.

Not the answer you're looking for? Browse other questions tagged boiler hot-water radiator steam or ask your own question.

4
Why isn't water coming out of a radiator in my freshly pressurized system?
1
Is 68F too low for hot water heating thermostat? Final radiators not getting heat
1
How do I permanently remove a steam radiator?
0
Would pipe from radiator to bottom of hot water tank be supply or return?
0
How do I bleed a noisy radiant heat system?
0
Why is my steam radiator rattling like this, and what can I do about it?
2
How to balance hot-water heating system when farthest radiator stays cold