Electricians, do you see any problems with this wiring diagram for power at light shared between independent light groups?

I'm looking for input on the safety and code compliance of the wiring plan i've detailed, shown in the photos below.

Description of the broader project

My jurisdiction is subject to the 2014 NEC. I'm planning to install downlights throughout my house, on one circuit, power at light, with groups of lights on separate switches (led fixture housings rated for max 25 watt bulbs, and airtight-ic Halo Model #H750ICAT). There will be nearly 50 of these fixtures on this one circuit (intending to install with 20 amp dual CAFCI+GFCI breaker (Square D Model #QO120DFC, using 12ga nm-b cable).

This particular portion of the project is for a bathroom; one of the light housings will be installed above the shower (thus the AFCI+GFCI protected circuit for interior lighting, to provide both AFCI and GFCI protection).

The first pic shows the switches in the room I'm focusing on with this first stage. Please ignore the fan/heater/light/night-light unit; I'm specifically looking to get input on the safety and code compliance of the downlight wiring. 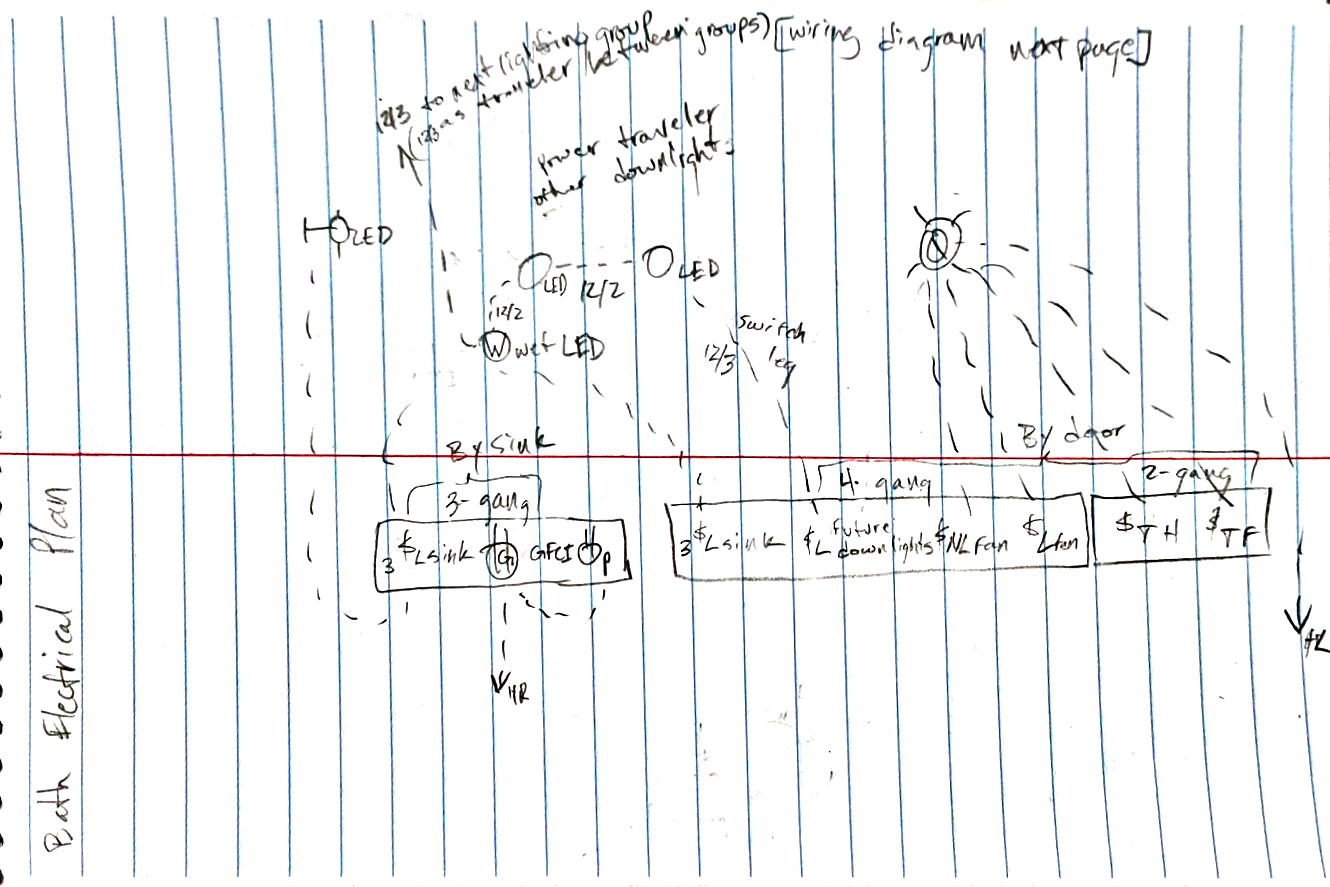 The second pic shows the general principle I think will allow me to carry power across the light fixtures, while switching groups separately. 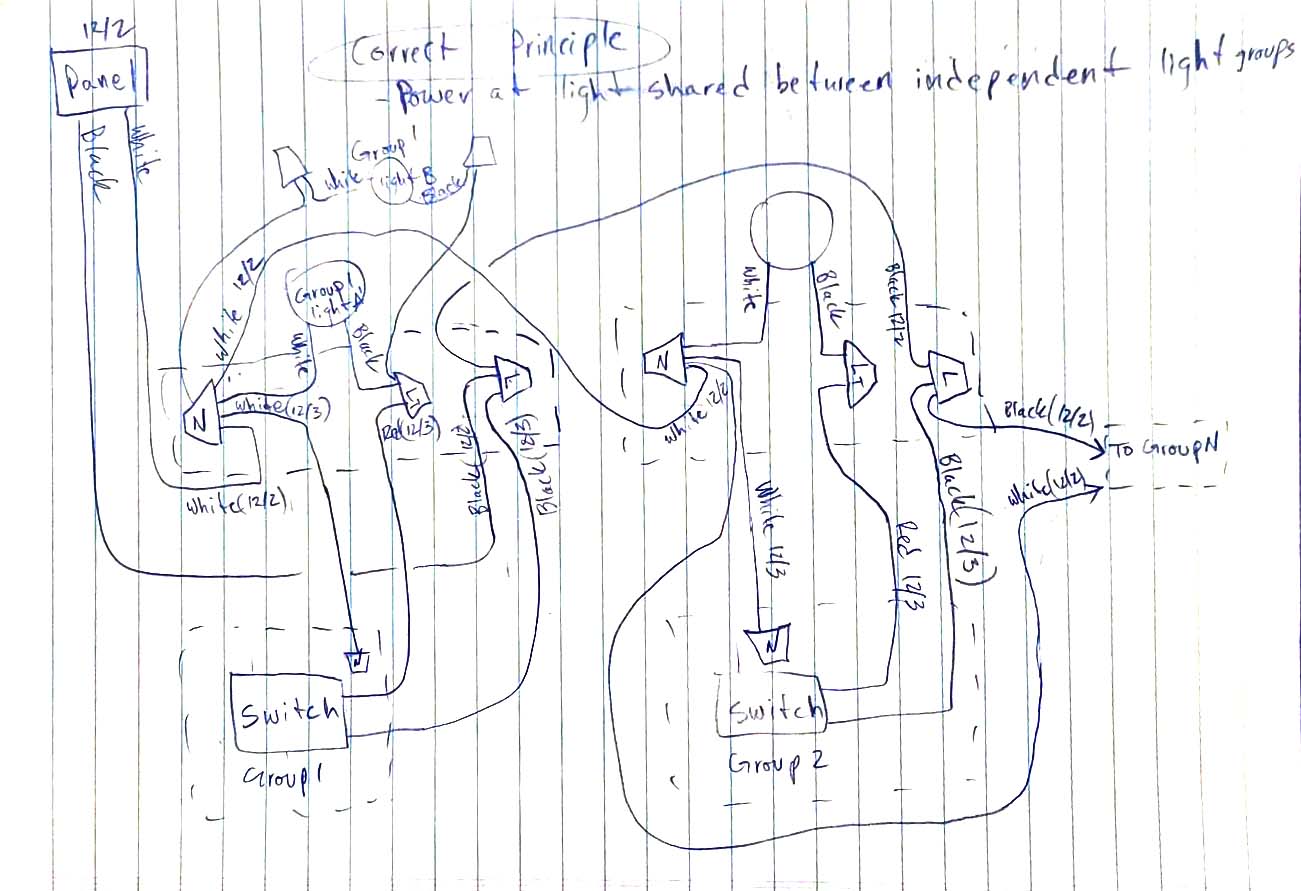 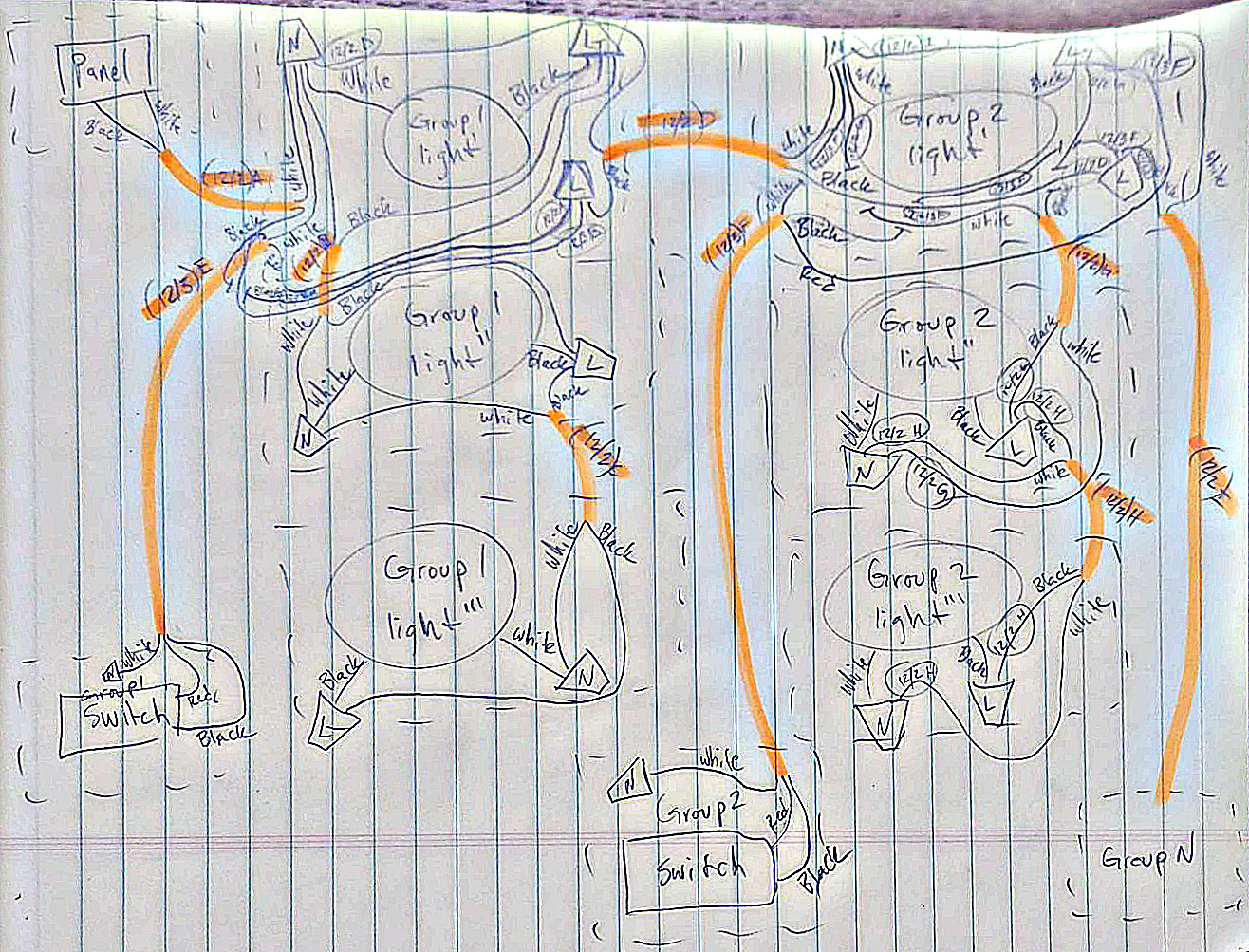 This looks good, although you'll have to pay attention to keeping your neutrals separated in the switch boxes!

Your plan for the light circuit should not be an issue at all; you're running proper NEC 2011 new-style switch loops with neutrals provisioned for future use, and your fixtures are designed to take LED modules, not Edison-base bulbs, so some dim bulb incandescenthead can't go in and overload the circuit with their heat globes, either.

The one caveat, though, is that you can't just glom all the neutrals together in the switch boxes like you're used to. You'll need to keep the lighting neutral strictly separate from any other neutrals present there to avoid falsely tripping your GFCIs, if nothing else.

Also, in an unrelated note, I'd consolidate the two apparently-adjacent switch boxes in your plan into a single six-gang box. If that's impossible, though, I'd at the very least get all the fan switches into one box and move the switches for the rest of the lighting out by themselves so that you don't have awkward problems with crossed wires. Another aid to dealing with that is using individual THHN wires in ENT ("smurf tube") between the fan and its light switch box; that way, you're no longer constrained by cable configuration limitations.

Not the answer you're looking for? Browse other questions tagged electrical wiring lighting bathroom remodeling or ask your own question.

2
Could you explain this ceiling light wiring?
3
Can I change an outlet circuit to 240V (NEMA 6)?
1
Are there restrictions on having all the lights on one floor on a single circuit breaker?
1
Garage rewiring
1
Diagram for wiring switches and a light
3
Is there a way to determine the order of items on a circuit?
5
Is it possible to tell from labels if the breakers are AFCI / GFCI in the main panel?
1
Master on/off with independent on/off light switch diagram