How much temporary bracing do you need when cutting a new exterior door opening in an existing house?

I'd like to add a door to the back side of my garage, but since this is a load bearing wall I'll have to brace it temporarily while I frame the opening. The garage has one room above it, which spans about half the depth and the entire width of the garage. I'm not sure of the joist size but the span is 12', and there is a steel I-beam that divides the full 24' span. 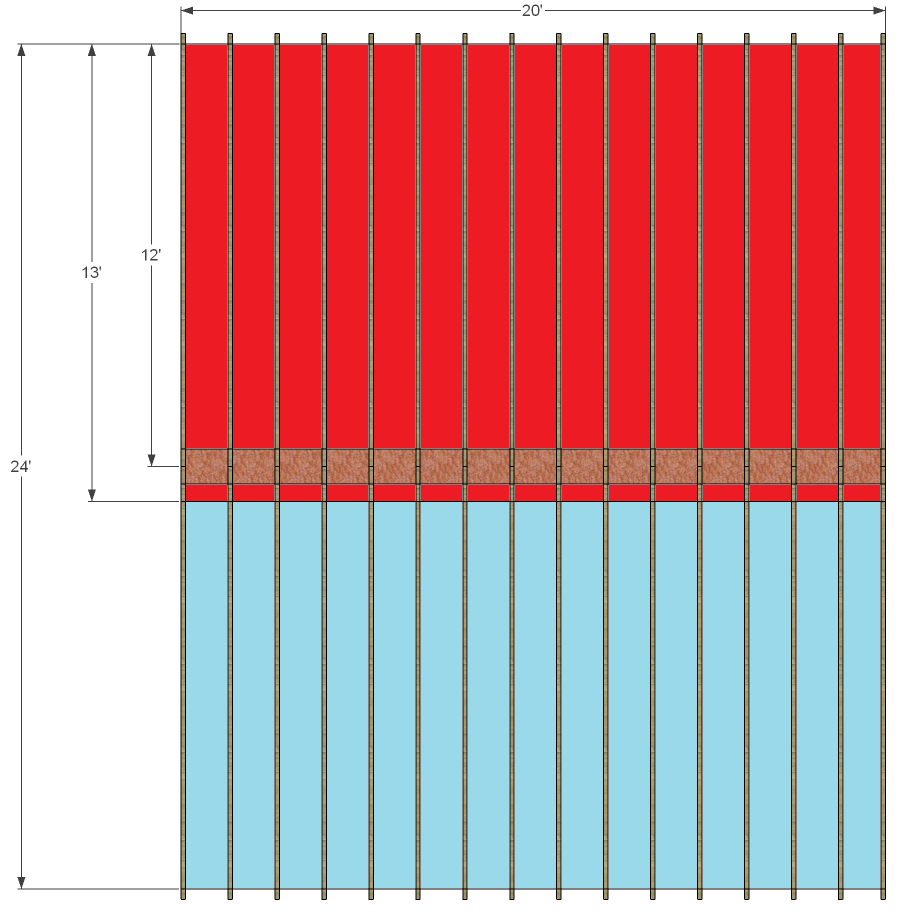 What type of structure will I need to create, to temporarily brace the ceiling while I cut and frame the rough door opening? How many joists do I have to carry to support the load, and what size vertical members do I need to hold the weight?

Look where the joists meet the ridge beam where you're going to put the door.

Get some dimensional lumber about 4 feet long, at least as thick as the existing beam. Nailing a couple of 2x6's together would probably suffice in the short term.

Give yourself enough room to work, and using a jack post and this 4 foot beam segment, support the joists in the area where you are going to work. Don't over support, as you'll lift the floor above. The idea is that you want to take the weight off the wall where you're working. Jack the post until it's snug, and take out one wall stud in the middle of the door. Check the supported joists for level, and jack up if necessary.

If required, remove another stud, and adjust the jack again.

Put in your door frame and header, and slowly jack the temporary beam down.

Chris's advice to put a temp brace under a few joists is exactly right. Practically speaking, the 20 foot wall probably has a double 2X4 top plate and you will need to remove two studs to frame for your new 32 or 36 inch door. It is very unlikely that you will see any deflection of these 2X4's when you remove just two studs. Regardless, it is easy to put in a temp header with a couple of house jacks as Chris describes, so why not do that and be sure. When you frame the new door, be sure to use a stud/jack combo on each side with your new header supported by the jacks. For a 36 inch door, a double 2X8 with a 1/2" spacer and a couple of cripples is more than enough to support the overhead structure.

Not the answer you're looking for? Browse other questions tagged framing load-bearing or ask your own question.

3
Attaching non-load bearing walls to steel I-beams
2
Calculating floor load strength
1
How do I determine what load values I need to use when using door/windows header sizing tables?
1
Removing a wall underneath joists that are already attached to beam in attic
1
Load bearing wall or not?
4
Can I replace a window in a garage gable wall without adding a modern header?
0
Reason for no header spanning this load bearing wall?
0
Load bearing wall and basement beam don’t line up. Want to add a header and larger opening. Problem?
1
Which is the load bearing wall?
0
Is an 8" header adequate over a 10' nook in an exterior wall?