I’m a newbie at installing things into the studs / drywall, and I need some help identifying how to use what is included in this wall rack mount kit.

Am I supposed to use the yellow pieces if installing into a stud? 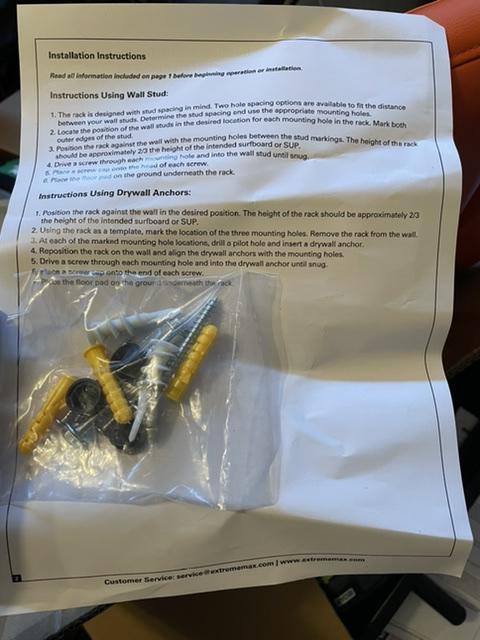 Also, I have no idea how the drywall screws are supposed to work given the mount screw holes are much thinner. Do i screw a second screw into the gray screws if mounting in the drywall?

OK, the yellow anchors do not go into the studs. They can be used in drywall, brick, masonry, etc when the proper size hole is drilled. Those big threaded anchors are for drywall. They have a sharp point and you screw them into the wall with a Phillips screwdriver and tighten them up so they indent a little into the drywall. Then one of your smaller silver screws get screwed into the center of the anchor. If you locate the stud, you can screw some of the silver screws directly into the studs after drilling a small pilot hole. The black caps just go over the installed screws to cover the heads for appearance.

You appear to have 5 anchors and 3 screws. I hope this isn't much of a rack, or that you're willing to go buy some screws. Lag Bolts.

The things you are referring to as drywall screws appear to be screw-in drywall anchors, which then take a normal screw in the center of the anchor. They hold fairly well for a drywall anchor, but unless it's a very small, light rack with not much weight of equipment in it, not suitable.

The yellow anchors are for solid walls, - brick, concrete block or solid concrete. They are also used on drywall but don't hold very well compared to the whitesh/gray ones. In holes in solid masonry they will hold pretty well, but you only have 3 of them...

If you can line up with a stud, or better yet two studs, just use the screws directly, no anchors. Or use some better screws, since those thrown in with imported racks may be of fairly poor quality, as screws go.

I mount racks for work. They are not small, light nor lightly loaded. They have multiple thousands of dollars worth of stuff in them and it would be very bad if they fell down. Since racks rarely manage to have holes that hit two studs, or if they do, someone doesn't want the rack "just there" standard procedure is to screw a sheet of plywood to the studs, and screw the rack to the plywood. If we can hit one of the studs as well, great, but we don't need to at that point. Use the biggest lag bolt (diameter wise) that will fit the holes in the rack, and use at least 4 of them unless it's vanishingly small. Length-wise, if mounting to plywood, they just need to be a bit longer than the plywood is thick for full holding power. Use washers as well, and allow for the washers and rack thickness as well as the plywood thickness when selecting the length.

Hard to tell exactly with everything in the bag. But the yellow anchors are "hollow wall anchors" - designed to be used with screws (which are almost certainly included). There also should be some screws that are designed to go through drywall and into studs - you do not use any plastic parts with those. There are probably a few other types of anchors as well, but can't tell in the bag.

Not the answer you're looking for? Browse other questions tagged drywall screws studs anchor or ask your own question.

3
How can I secure a wall-mount server rack?
4
Plywood plate for mounting to wall
3
Is it okay for one curtain hanging bracket to be screwed into drywall with no anchors?
2
how much weight will a 1.5" long wood screw support when screwed into stud?
1
Question about drywall screws
0
What screws to affix TV mount to wooden stud partition?
4
TV mount on wooden studs - what screws to use
0
Which nut and bolt to attach wood to metal?
4
Hanging over both screws into drywall vs one into stud and another into drywall