How can I rewire to remove/relocate this hidden junction box?

I discovered some seemingly-inefficient wiring and a hidden junction box in the wall. I understand why they would put it there, but it still seems inefficient. I think the same could be accomplished differently, eliminating the need for the junction box or possibly relocating it at a normal outlet height, but I'm not sure how.

I've drawn out the wiring diagram.

Note that I wouldn't mind relocating J1 junction box underneath the switches (i.e., outlet height). But, that would put it under the fireblock and I'd need to keep the wires going through there to 3 or less. This seems necessary either way if I need to make the junction box accessible without it looking ugly inside. 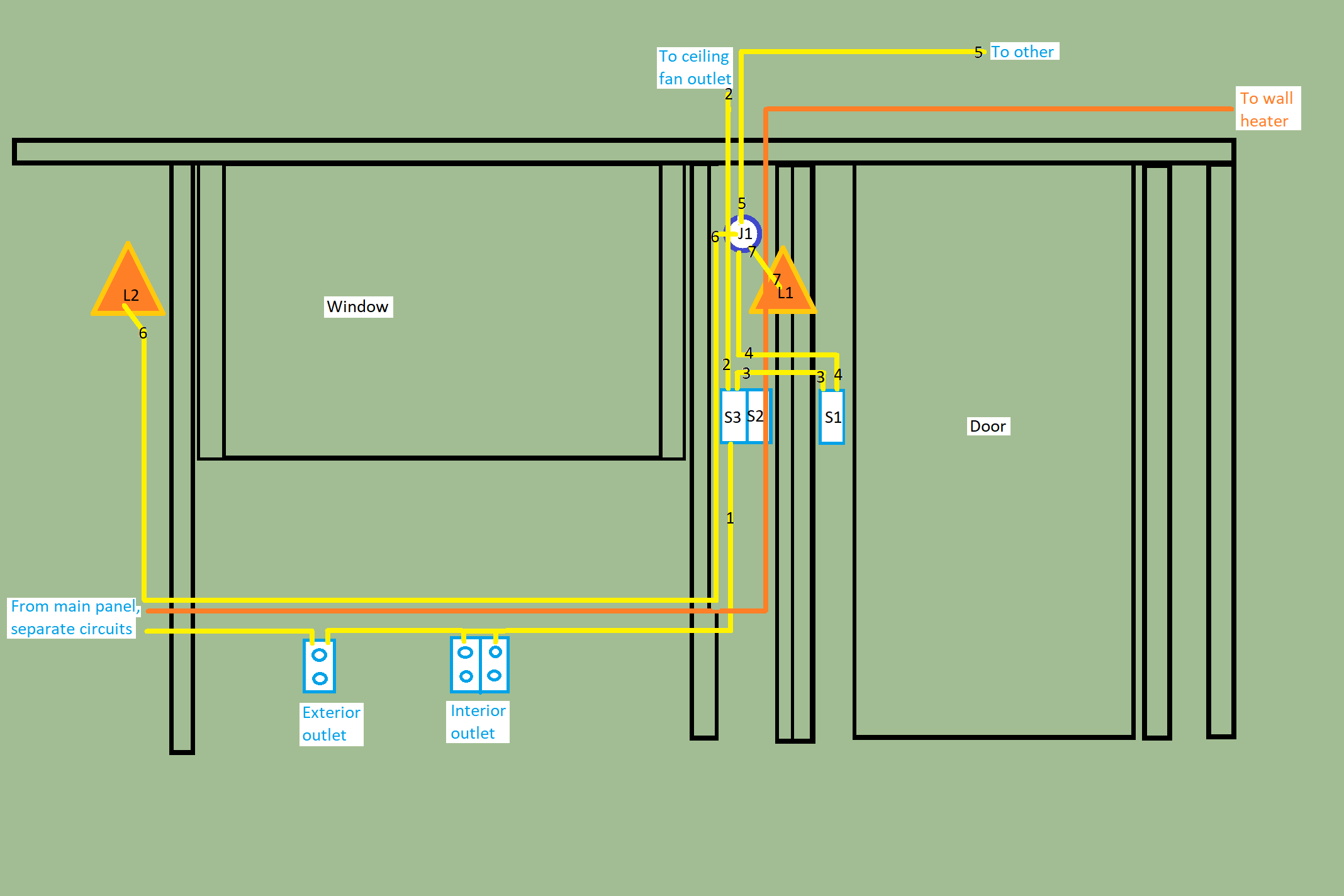 I'd make the argument that this is indeed repair work in the scope of 334.40

Even taking the NEC 334.40 restriction on concealed use of NM splicing devices as limiting them to repair work in existing wiring, I'd make the argument that this is a repair, as it's fixing an existing Code noncompliance in an existing building (vs. simply expanding on Code-compliant wiring).

As to getting the new cable up thru the top plate? Well, one could cross it over the into the other stud bay by running a 12/4 instead of the 12/3 between the two switch boxes and then running the new cable up from the S1 box, but that may require a deeper box at S1 as well as replacing the S2/S3 box with something chunky. It also should be possible to have 2 holes in the top plate and/or fireblocking in the S2/S3 bay, with the cables split between the holes.

The alternative if you can't use the NM splice on cable #5 would be to "flip" the J1 junction box to the inside wall at its current height, given that rerunning cable #5 is off the table. One could disguise it with a nifty wall sconce or such if one wished, even; I'd use a deep 4" square or "5S" box for this job as one can put a single-gang mud ring of the appropriate size on either.

7
What should I do with a double gang box if I no longer need two separate switches?
2
Can I install a device transformer in a junction box to keep it behind the wall surface?
0
How to remove junction box?
1
How can I fit a face plate to two devices in separate single-gang boxes?
2
Surface-mounted Electric Circuit (conduit) - do I need a junction box
0
Does MC cable need protection in an exterior wall penetration?
2
Funny pipe in junction box next to outlet
1
How to avoid hidden junction box when renovating a room without breaking adjacent rooms?
2
Tapping into junction box to add new outlet
0
Wires don't quite make it to the junction box for an outlet