What's going on with this switched outlet wiring in the middle of a run?

Help me figure out what's going on here and come up with a way to turn this into a half-switched outlet?

I have a late 1940's house, and some of the circuits are not grounded. I recently replaced all of the switches and outlets in the house, putting GFCIs in the first receptacles on each of these circuits to protect the ungrounded outlets.

While I was doing this, I thought I'd change some of our switched outlets to be half-switched. The first one I did this for was on the end of a run, so it was pretty simple because there was just one cable running from the outlet to the switch. But the second one was in the middle of the run and is set up in a way I don't understand.

Here's a diagram of the outlet and the switch: 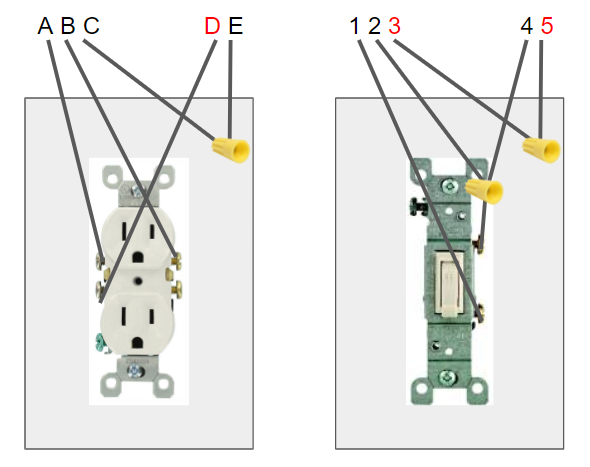 Did not ultimately get a lot of help here, but I figured it out myself, so posting in case there are others who run into a similar situation.

The first key was figuring out how the wires in each box matched up. I connected D, the hot wire, first to A, then to B, which helped me figure out which two wires in the switch box they matched up to. C I knew was the neutral, so it was the third wire; whichever one I didn't hit by hooking D up to A & B.

Then I essentially did this: 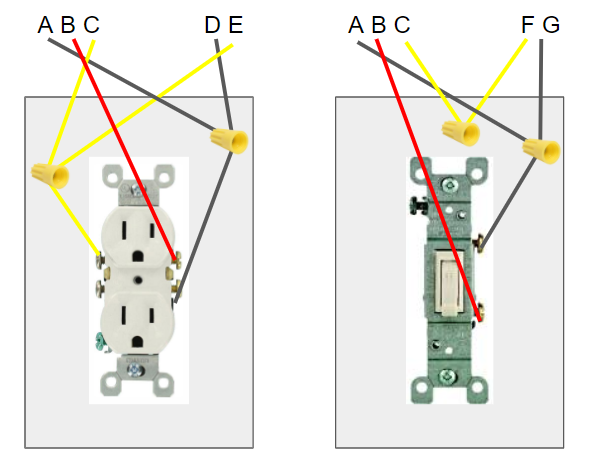 So the top outlet is switched, the bottom is not, and I no longer have hots connected to neutrals, which to reiterate, is how I found it, not how I chose to wire it.

Not the answer you're looking for? Browse other questions tagged electrical wiring switch receptacle or ask your own question.

2
Wall of 2 switched outlets not working
5
Outlet w/3 neutrals, 3 hots, 1 ground?
1
how to add an overhead ceiling fixture to a switched outlet run
0
Added sconces to switched outlet run and made the outlets always hot, what do I do with the last outlet?
1
Can I make a switched outlet which is connected to light hot all the time without running new wire?
0
Help understanding the wiring in this electrical box
1
What's the best way to resolve multiple circuits going to a single outlet?
4
How can I wire this switched GFCI combo outlet with two neutrals and two hot wires?
0
Rewire fully switched outlet to half-hot