Is there anything I can do to make it easier to remove plugs from receptacles?

This will depend in part on where you are in the world. Sockets in the UK can be very tight when new, but if you open them up you can often loosen the metal contacts so they don't grip the plug as tightly. I would imagine sockets in other countries will also have similar adjustments possible.

Make sure you turn off current at the breaker/fuse box first!

In general, though, I wouldn't advise doing this as it does increase the risk that you will get a bad electrical connection, which could lead to arcing and fire. This is still a low risk, so don't panic, but in general repeated plugging-in and removal will loosen and weaken the socket over time.

I do not unplug appliances in my kitchen, but just turn them off with the switches, which are designed for repeated use.

You could try something like this attachments to make plug easier to pull out:

These appear to stick onto your existing plugs.

You can get new plugs with a built in handle: 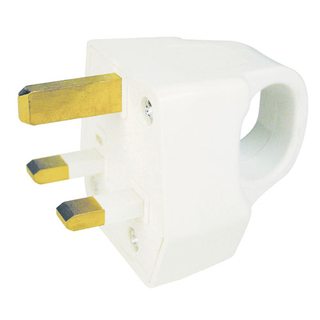 but these would require you to rewire all your appliances. This is perfectly safe if done properly, so if you don't feel confident in doing it yourself you should be able to get an electrician to do it for you.

I recommend that you buy a power strip.

If you are concerned that the appliances are disconnected when you're absent, then you can turn off the switch on the power strip. And, no more plugging and unplugging.

This will sound strange however I've discovered that if I unplug the appliance and simply whip the plug prongs using my index finger and my thumb the plug goes in and out smoothly. I now do this every time I plug in and unplug our appliances and it works like a charm for me, go figure?

6
Can a mix of receptacles and light fixtures be installed on a single circuit?
2
Why are there multiple receptacles by amperage?
0
How can I add two bathroom receptacles behind and above a vanity?
2
What can I use to lubricate electrical contacts?
3
How can I provide GFCI protection to my kitchen receptacles?
0
3 wire receptacles in a 2 wire system
2
No power to circuit after coffeemaker plugged in for random amount of minutes
3
Convert light fixture to receptacle
2
Electrical problem
2
Need some advice on re-wiring kitchen, one empty breaker left