This question is not for the faint of heart.

I want to know if I can turn an old outlet on a multi-wire branch circuit (MWBC) into 1 or 2 GFCI outlets.

My house was built in 1970 and has a MWBC in the kitchen with two breakers going to each duplex outlet, one to the top and one to the bottom, and very old outlets. I want to change outlets in the kitchen to GFCI.

I don't know how to make the fancy electric diagrams so I drew a picture of the box. 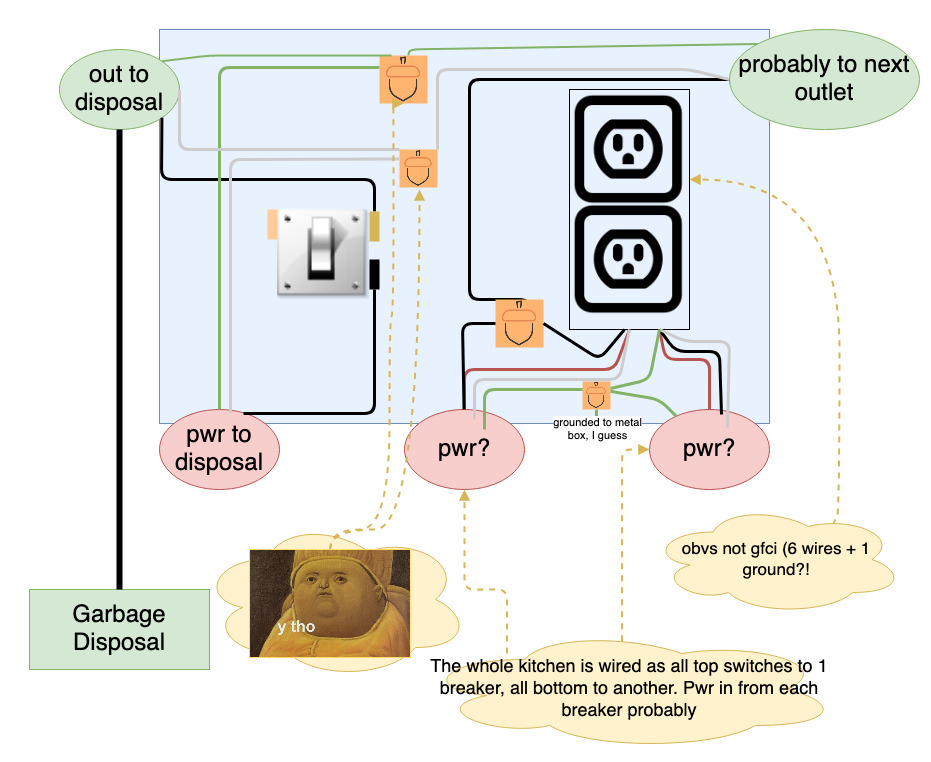 Can I do this? Or would it be something else? 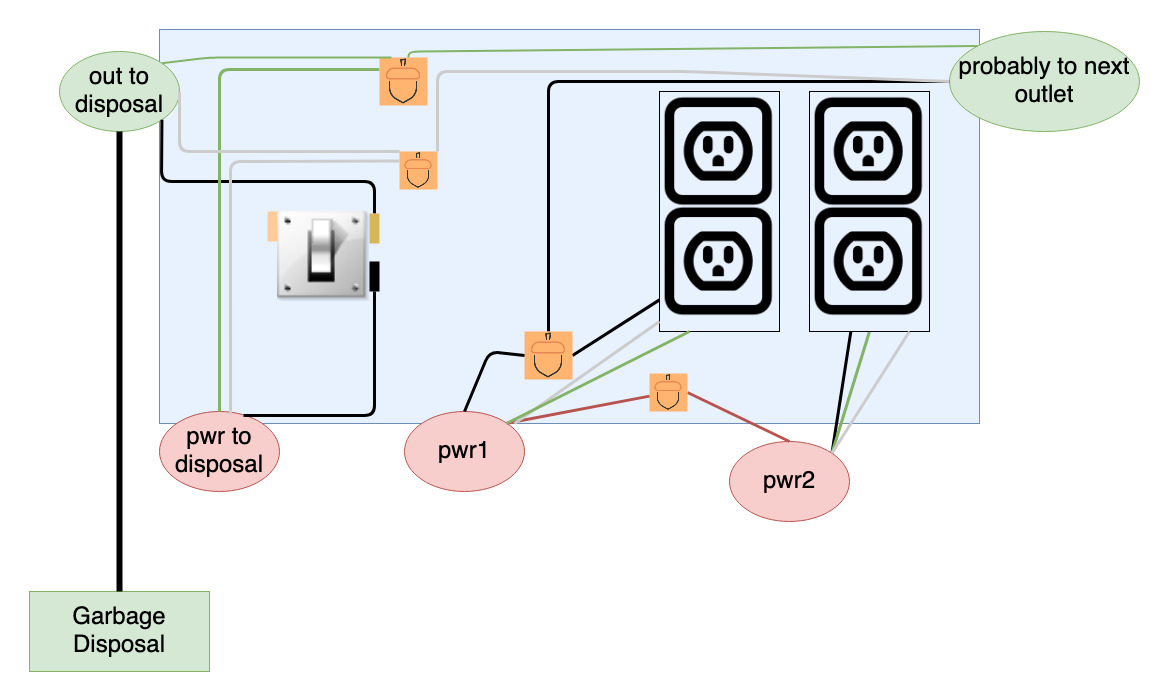 #2. On a separate note, why are the white wires to the disposal connected to the line out to the next outlets?

That is completely wrong. I don't know what they were thinking!

When you have multiple circuits in a box, neutrals must stay with their partner hots. There are several reasons, but one is that neutrals don't have breakers. They depend on the idea that neutral will carry the same current as its partner hot (or with MWBCs, <= the current of the hots due to how they work).

As things are, that disposal neutral could be returning 2 hots' worth of power, and could easily overload.

I don't know where that "probably to next outlet" leg is going, but it needs to make up its mind which circuit it is on! I would put it on the disposal circuit, because that is less likely to violate Code.

#1. Can this outlet be turned into 2 GFCI? Or will I just have to get an electrician to figure out wiring 1 breaker to each outlet?

This is called a Multi-wire branch circuit. Those are legal, but you must follow several rules, which "the last guy" ignored.

Rule 1: Neutrals must be pigtailed. That is, neutrals must go to a wire nut and be joined with a short white wire that goes to the recep. Neutral must stay continuous even if the receptacle is removed.

You notice that grounds already work this way. In an MWBC, neutrals must too.

Rule 2: Back at the breaker panel, the breakers must be handle-tied or be 2-pole. Can't be independent breakers.

One very fast way to install GFCI protection is to fit a 2-pole GFCI breaker. Boom done, you don't need to fiddle with anything else.

Now, as far as fitting GFCI protection, you have several options other than "blowing out the box to a 3-gang". Nothing goes on LOAD - leave the warning tape on it. There is no way to use LOAD with an MWBC. 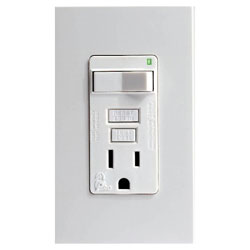 None of this will do anything to provide GFCI downline protection to other outlets in the kitchen. If you need to do that, it may be cheaper to use a 2-pole GFCI breaker. You will need to fix the poached-neutral problem, because GFCIs don't tolerate that.

Here's what I did.

I took @Harper 's advice and made the line out on the right side of the box pick a circuit and pigtailed whites and one hot line for the outlet. However, instead of pigtailing reds and connecting blacks, I pigtailed blacks and connected the reds because the outlet wasn't working on reds (it's possible I may have had something loose, but I didn't want to spend another 30 minutes fiddling and switching breakers to find out). Here's the final crayon drawing of the box.

I now have a working GFCI and disposal switch! 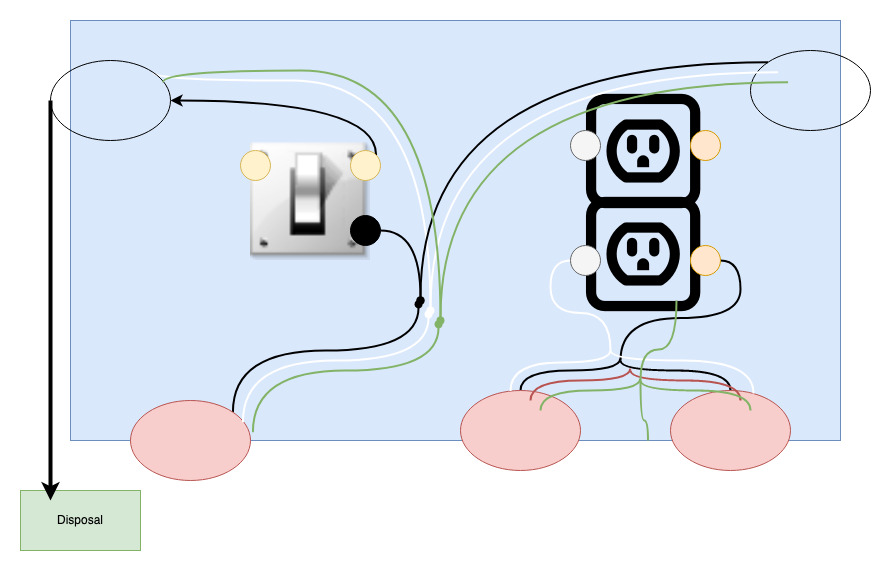 Not the answer you're looking for? Browse other questions tagged switch receptacle gfci or ask your own question.

12
First time changing switches and outlets (receptacles). Anything special I should know?

6
How should I wire a GFCI outlet and a switch to isolate the switch but provide GFCI protection further in the series?
4
2 circuits connected in one box?
1
GFCI Outlet trips when white and copper wire touch
0
Adding a GFCI to an existing circuit. 2 black, 2 white wire problem
0
GFCI Outlet in kitchen cutting off power of all other outlets
0
How to wire GFCI combination switch/receptacle
3
Installing GFCI into a box that feeds two other outlets
2
How do I intall GFCI breaker if wire for outlets is 12/3 using two breakers?
2
2 independent GFCI (or 2-pole GFCI) outlet in 1-gang box. Does that exist?
1
Best approach to convert single gang, non-GFCI outdoor outlet to two GFCI outlets on two new circuits?