How can I fix a large hole in plaster ceiling that's backed by drywall instead of wood lath?

We are renovating a 1959 home and have a large hole in our plaster ceiling due to the removal of a kitchen wall and soffit. I have reviewed lots of videos about how to patch plaster + lath ceilings; however, instead of lath supporting our plaster ceiling, they did it with sheets of drywall? How do I fix the hole if I don't have any lath for the plaster to adhere to!? If I use hot mud instead of plaster to fill the hole, will a 1/4" of hot mud adhere okay to the drywall without any additional support?

(Note, image includes an additional layer of drywall we added in an attempt to patch!) 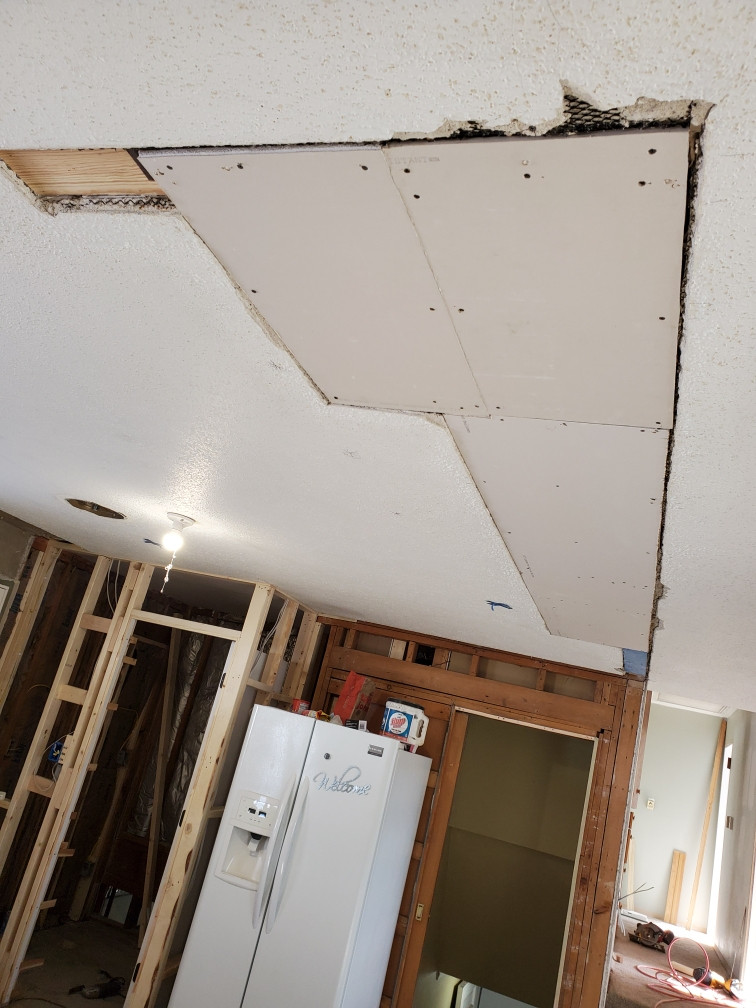 What you have is what is called "rock lath" It is a forerunner of modern drywall. It replaced wood lath somewhere around the 1940's or 50's.

There should be framing that the rock lath is secured to, typically as backers over the wall that was taken out or other wood that was on either side of the wall. A small diameter nail probe should locate something. With the framing found. even if it is only on an edge, or in the middle, it does not matter, this will allow a filler piece of drywall to screwed in place, not nailed, nailing will vibrate all kinds of stuff that may crack things you don't want cracked. The sandy "brown coat" and thin "white coat" usually are about 3/8" thick over the rock lath. 3/8 sheetrock is still available, get a piece and set in place with screws long enough to find the framing, say about 1 5/8" to 2" long. You can add dabs of construction adhesive under it too, it the framing to screw to is only on one edge.

After the filler pieces are in, and the existing plaster is cleaned back to get rid of the remnants of the corners that stick downward, then you can start filling in the gaps with fast set. When they are filled use a 45 or 90 minute fast set to tape all joints where new and old meet. This material is available in "easy sand" don't believe it, it is better than the original fast set, but still tough to sand to a finish, so don't use it for the finish coat., use regular drywall mud for the final coat, it will go much easier.

You are on the right track with the repair. Typically Plaster is roughly 3/4" to 7/8" thick. As a mention, the black expanded metal you see at the edges of the plaster are/were 8" wide pieces bent lengthwise to act as reinforcement in the corners. This is what was typically done when rock lath was used. Rock lath is 3/8" thick of the 3/4" to 7/8" mentioned earlier. If you are adding your drywall directly to the framing and not adding it over the rock lath, which my answer above assumed, then add wood strips of the proper thickness where the screws will go before you add the sheetrock. This would mean taking down what you have up already. This would allow a LOT less mud to be used. If you leave it as it is now, it may take a few bags of fast set to get it filled in properly. If you do just the joint, you may notice a high spot because of it.

It looks like you have a sanded finish on your ceiling. I would try to grind down the roughness a little with a very coarse sandpaper on a sanding pole or pad if possible. This will make the final skim coat on the repair much easier to do. The bumps of sand will make the new finish ripple because of it. You could get by without the coarse sanding first, but you would need to wet sponge the edges down to feather in the new to old. Beyond the edges, into towards the repair there will be ripples to sand out later after it dries but the edges will already be smooth...hopefully.... I think Ed Beal's answer may have a good idea on how to mimic the sanded finish. I have not tried it, but what I do know, what I have tried did not work satisfactory for me.

This lathe is sold in 8x2 foot sections (or about those dimensions). It is shaped with opposing diamond shaped recesses in several rows. It also has strong backs (stiffeners) running longways to keep the panel from bending.

Be aware that there is a specific orientation when installing the lathe. The diamond-shapes are cupped so as to hold the plaster more securely preventing it from sliding off.

The lathe is simply nailed to the surface with roofing nails that are able to penetrate into the framing members. No need to be concerened about correct spacing from the drywall; the stiffeners also keep the lathe the correct distance from the surface.

They install directly to the drywall with no vapor barrier required. Don't overlap the sections; butt them edge-to-edge. The panel is sold in varying depths; 1/2 inch and 3/8 inch being the most common.

Another faster and least expensive alternative is to make up a sand slurry and brush it on the wall. This is basically a primer coat (not a paint) containing sand (or grit) combined with a bonding agent. It is applied with a wide brush or thick roller to the entire surface. Once dried the grit gives the plaster some "tooth" to grab to.

In the early days of drywall people did not like it because it was cheap so to hide the fact that it was drywall a heavy texture was applied. By the 50’s most of the jobs I have seen are just Sheetrock mud put on thick and knocked down or patterned. It is pressed directly into the paper. Prior to application a damp cloth wipe down of the Sheetrock will remove the dust and promote adhesion. I have seen sand and used added to the mud to really fool people and it works. I have also seen plaster applied directly to Sheetrock and it did last for many years but it tended to crack and chip off more frequently than standard mud. So you can use either when I want a absolute true plaster look I add washed sand to the mud and mix well.

Don't use plaster. Use modern drywall joint compound on drywall installed flush with the plaster.

My former 1950s home had the same situation, with 3/8" drywall behind 3/8" of plaster. I describe it as the best walls I've ever owned--very durable and easy to work with when adding outlets, etc.

Shim out the framing so 5/8" drywall lays flush with your plaster. Use modern taping techniques and materials to finish the joints. Texture as required, prime, and paint. You'll have a flatter surface with much less work than you would with plaster.

Not the answer you're looking for? Browse other questions tagged drywall plaster hole-repair or ask your own question.

8
Is this plaster over gypsum wallboard?
2
How to repair walls which have two layers of wallboard?

10
Can I drywall over plaster
4
How do I patch a large hole in plaster and lath?
2
Can I repair a plaster ceiling with drywall?
4
Plaster Wall Ice Damming Water Damage
0
How can I mount an electrical box in a drywall hole that's too large?
0
Drywall over Ceiling tiles and Plaster Ceiling
6
How to patch a wood lath plaster rounded corner?
1
Fill large gap in plaster with no lath
0
How to repair hole in plaster ceiling