How to debug a light fixture that is no longer working

I changed out the switch on the light fixture in my bathroom, and the fixture no longer works. Prior to my changing the switch, both the old switch and the fixture worked fine. I'm trying to figure out the root of the problem.

I tried swapping the new switch for another new switch. No change.

I tried swapping the fixture for another fixture. No change.

That suggests the issue could be a problem with the wiring between the switch and the fixture, but that seems odd to me -- what exactly would the problem be?

There's also the possibility that I'm somehow messing up the wiring of the switch somehow. This seems more likely -- human error! -- but there are only two wires here, a red and a blue. My understanding is that the red one is the hot wire and therefore the blue one is presumably the neutral, but the information I've found online about blue wiring is a little hard to decipher. See the attached image. There is also a GFCI outlet (which still works fine) in the box. 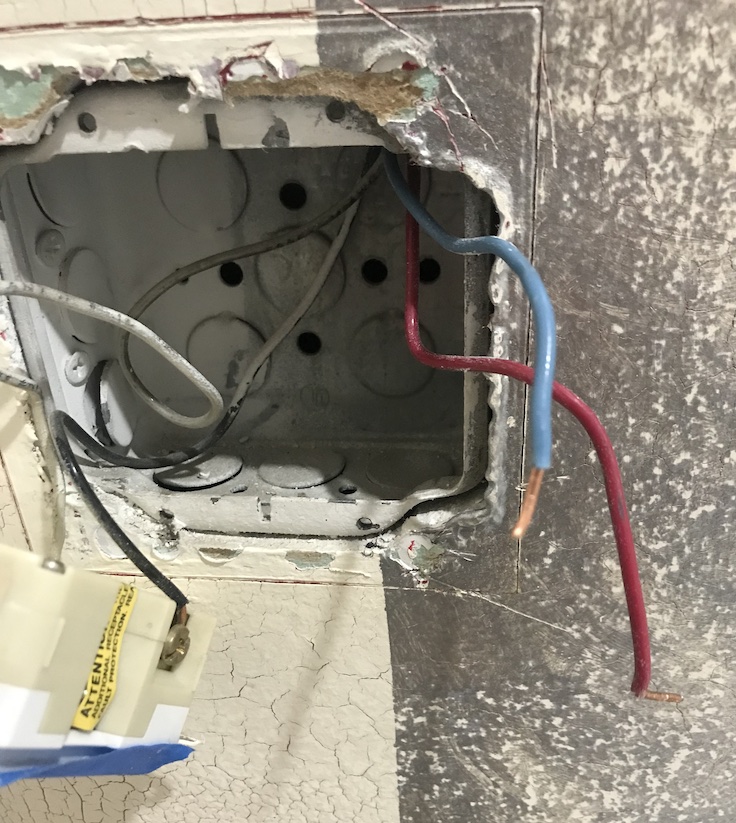 This is the light fixture box. There is no blue wire here, so I gather there is some sort of junction in between the switch and the fixture. 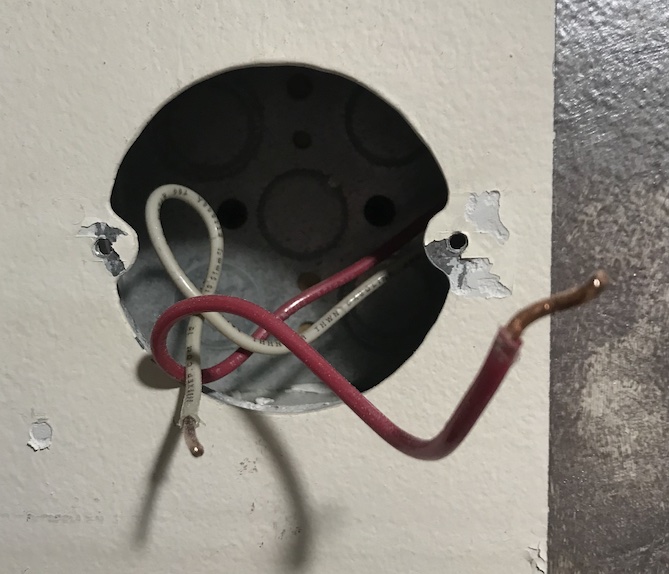 Finally, I discovered an old fixture box behind a (bad) patch in the drywall. I'm including an image here in case it is relevant. I note that there is a blue wire at the top of the box, and if this was the fixture used before the new one was installed, it would make sense that current is being routed through this fixture to the new one. 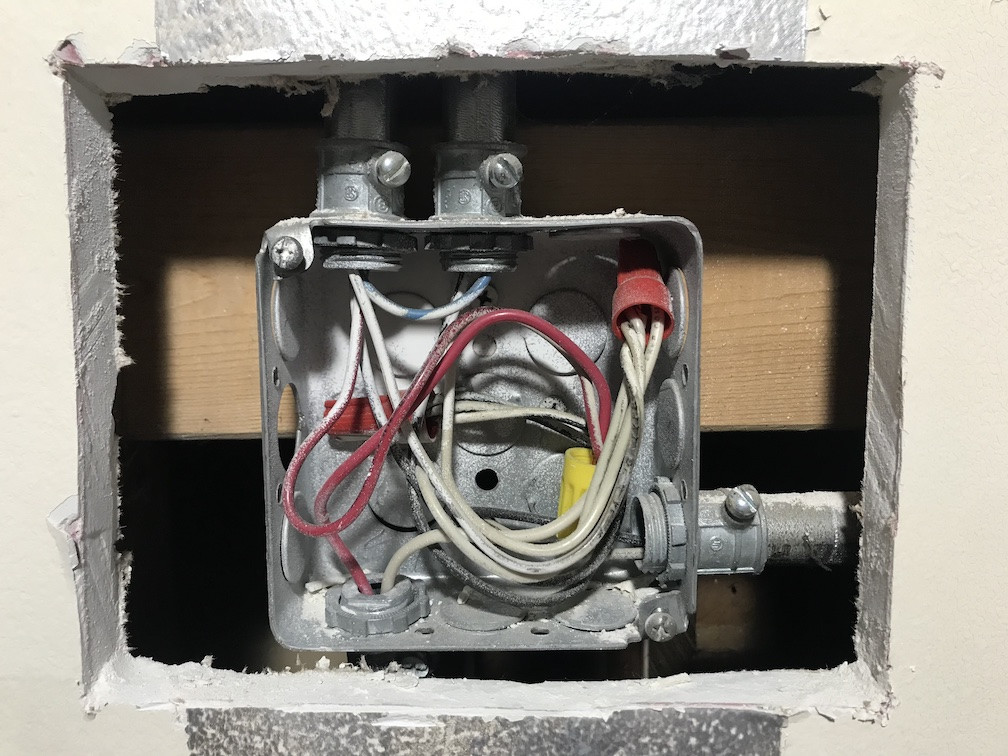 Here's how all three boxes in relation to one another on the wall. 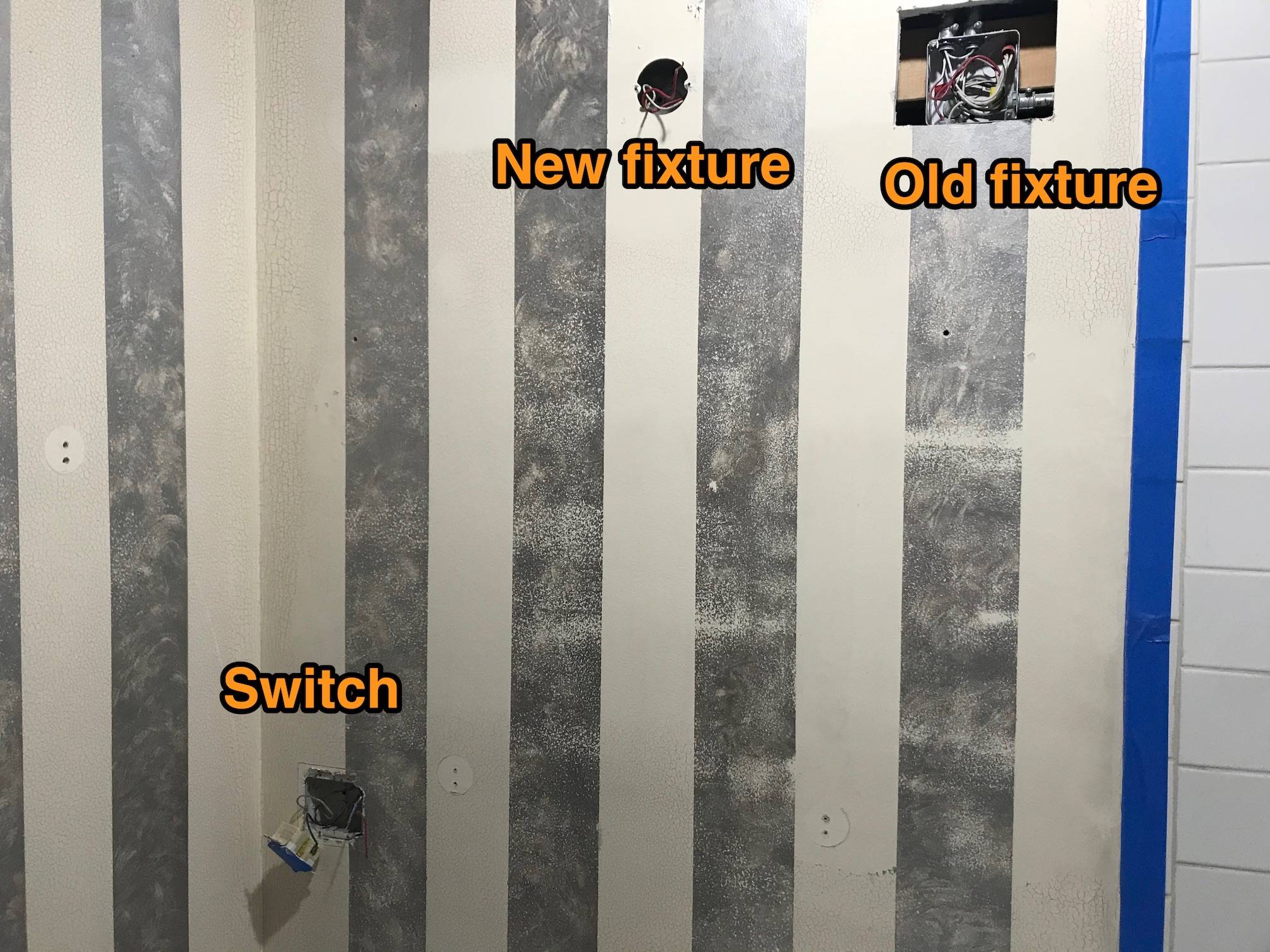 Any other suggestions on how to figure out what is going on here? Since this was working a short time ago, I'm hoping I can fix it myself, but I will bring in an electrician if turns out to be more complicated than just installing a switch or fixture correctly.

Now that I know what the problem was, I'm going to try to write up a more general guideline for complete amateurs like myself who find themselves in a similar situation. Let me begin by stating the obvious, though: if the work is more complicated than replacing a switch or an outlet, you probably need a professional.

Also, always flip the circuit breaker to cut off power before accessing any live circuits.

OK, to recap the issue: after replacing some ugly but working light switches in my bathroom, the vanity light fixture mysteriously stopped working. It was clear that something I had done caused the problem, but I had no idea what. I need to trace the issue to the source.

Step 3: if the fixture and the switch are both fine, then the problem is likely the wiring. It's helpful at this point to step back and understand how the wiring in the room fits together and what the wire colors mean. Let's start with the easy ones:

Now the trickier ones:

So the general flow of power in my bathroom looks like this:

Now also understand that switches and outlets in a room are usually connected serially. Knowing this, you can figure out the flow of power in a room.

In my case, I used a non-contact voltage tester to see which wires were actually live. In other words, I just touched this pen-shaped thing to each of the hot -- red, blue, or black -- wires in the chain leading to the fixture to see which ones actually carried a charge. And it turned out that none of them did. Not even the blue wire leading into the switch was live. (Side note: if I had the non-contact voltage tester to begin with, I could have saved a ton of time swapping out switches and fixtures, skipping steps 1 and 2 above.)

Once I realized there was no power coming into the switch, my focus shifted one step upstream in the chain to a fourth electric box on the wall that contained the switches for the bathroom fan and overhead light: 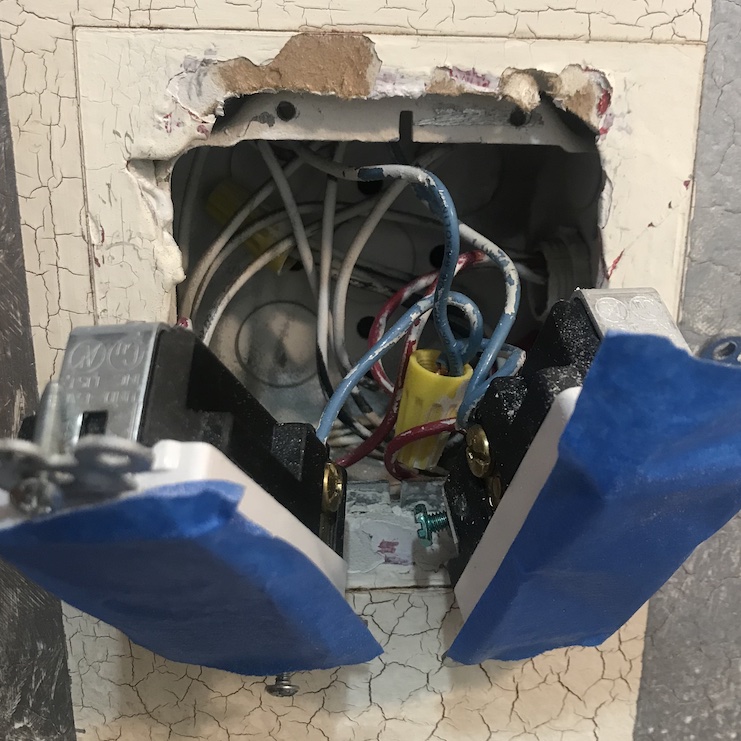 It hadn't occurred to me that these two switches, which were both working fine after I replaced them, would have anything to do with an unrelated fixture. But sure enough, when I cracked the box back open, I spotted the yellow wire nut connecting the three blue wires.

That is, now it is connecting the three blue wires. At the time, the third blue wire, the one leading to the downstream vanity switch, was disconnected, because I had forgotten about it and forgotten that the hot wires are connected serially.