Can I route the neutral wire from a surge protection breaker across the panel busbars?

I plan to install a whole-house surge protective device (SPD). Its instructions state that you should place it as close as possible to the connection of the mains with the busbars. Also it has a neutral wire which is supposed to be made as short as possible.

My panel already has a backfeed breaker for a generator in the top-right position (blue). This cannot be moved because there is a physical lockout device on the panel.

If I put the SPD in the top-left position (space can be made - green) then is it acceptable to route the neutral wire through the shortest path crossing the busbars?

If not, any advice whether it would be better to: 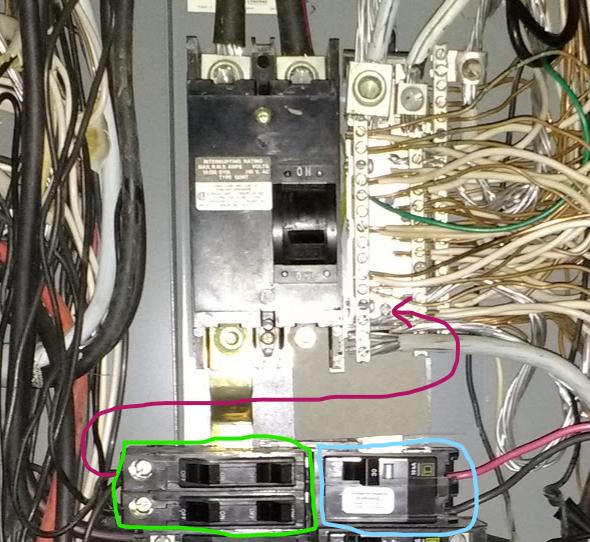 (The purple arrow is not specific as to the exact terminal, its just generally pointing to the intended area.)

I did see a brief discussion about a similar issue in the comments to https://diy.stackexchange.com/a/69282/41781 but it didn't seem definitive.

Having the neutral cross the hot bus is not a code violation.

However since neutrals are not protected for overcurrent, if for some reason a second circuit was tied in and the insulation melted it could damage the panel badly enough to require replacement. I have seen this.

I would route the wire around as not to create this remote but possible hazard.

But your wire is too short? Then splice enough to make it around and this would be a safer method that is also code compliant.

This is the reason electricians that do remodels hate to see wires with no service loops, now the wire requires a splice or less than desirable routing.

Installing an accessory ground bar and landing it there is not an option because neutral is not ground.

I understand why you think that... but consider what you are looking at.

Here's the thing. Grounds never carry current except during fault conditions, which are supposed to be momentary. Neutrals carry service current normally and continuously. As such, neutrals need to be thermally rated for that duty. That's where a couple of screws into the box chassis isn't going to cut it. That's why neutral bars are UL-approved.

I recently saw a GE panel where the UL-approved panel labeling plainly stated the left side bus was neutral and the right-side bus was ground. The installer had ignored this and put neutrals on both bars as convenient. They were clearly having problems, because some numbnuts had run a #12 jumper between the bars. Yeah, a ground screw is not rated for everyday neutral currents.

The easiest option is simply put the surge beneath the generator breaker.

The manufacturer wants it at the top because that's a marginally (very slightly) better location. It's still on the same bus bar. The difference in conductivity between space 2 and space 6 is a couple of micro-ohms. So what they really mean is "near the top" and not "at the very bottom of a 40-space panel".

You have a variety of breakers clamoring for the top spaces because it's a tiny bit better: Surge protectors, generators etc. However, generators have an essential reason for being there. Other loads don't.

3
How much extra wire should I have in my electrical panel?