The wall in my master bedroom, which is facing outside, has exposed brick and, for several years now the bricks have been showing signs of moisture damage. The symptom is white, frost-like substance coming out of the brick. 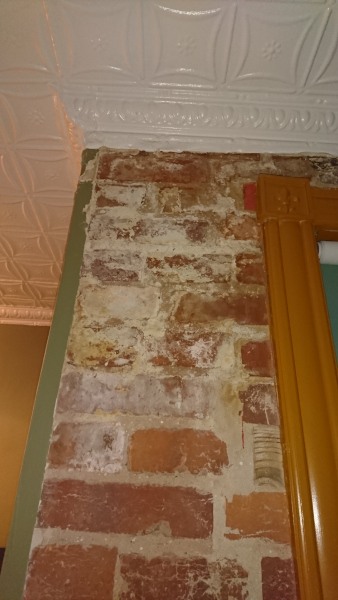 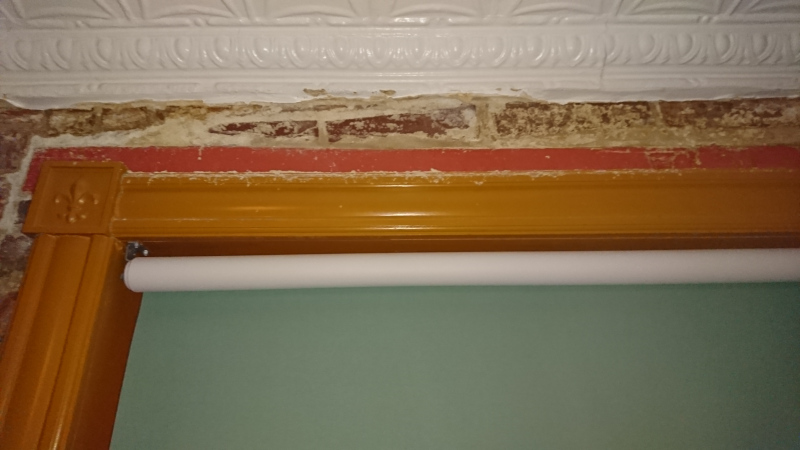 For a long time, during which I had other priorities to work on, I suspected that the roof turret, which is right above the wall areas affected, was leaking, as there are a couple missing pieces of slate. Here you can see it and the window in the picture is the one from the second indoor picture above (notice even outside some paint is peeling as a result of moisture penetration): 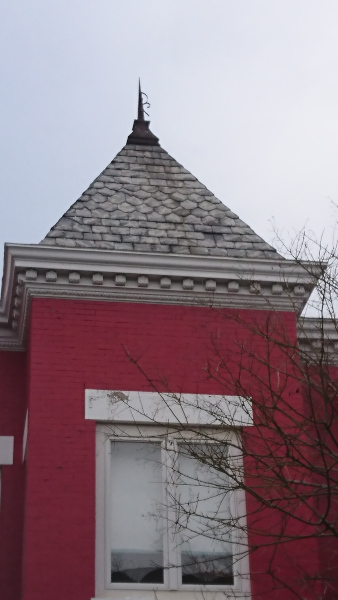 Several days ago, it rained really hard so I decided to test my conjecture about the cause. I went into the attic under the turret to see if there is water penetrating after it had been raining continuously for some time. In fact, it was not correct. I inspected carefully and there was no water leaking anywhere. However, the wall under the turret in the attic, right above the window damage shown above, also showed similar signs of damage. 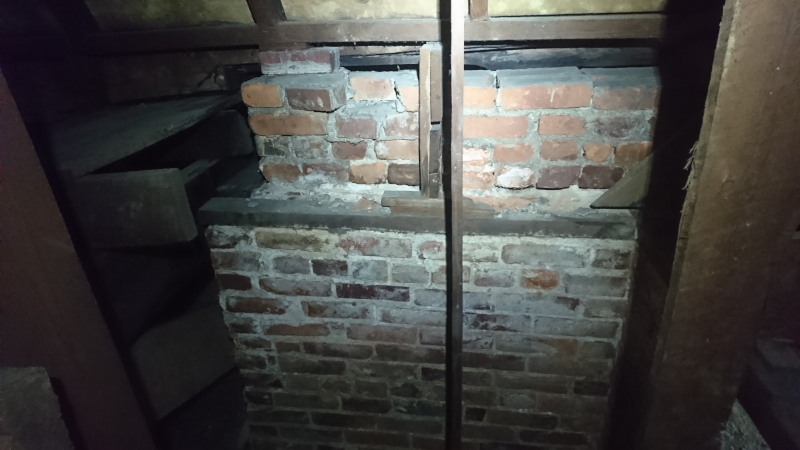 As it dawned at me at that moment is that moisture must be coming some other way,I looked around to realize that the front about 40% of the attic, including where the damage is, has no clear access to either of the two attic vents that are in the middle of the roof but with several baffling obstacles in between: 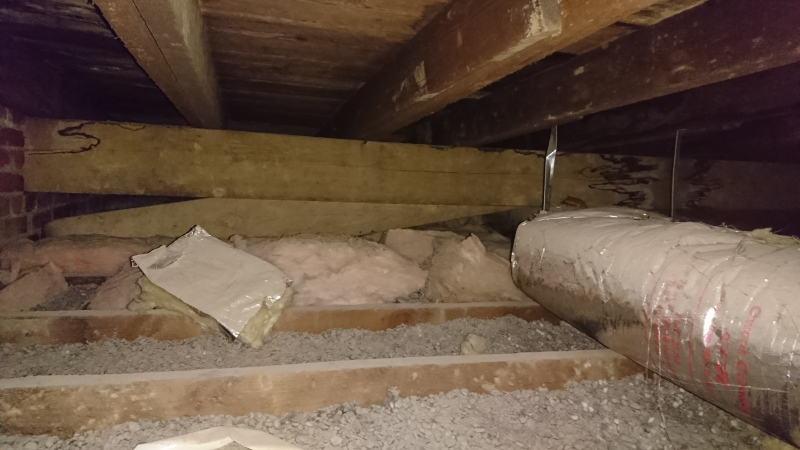 The new insulation rising too much is pink under the crossbeam and closer to the front of the picture is the original insulation, which looks as old as the house (112 years). The vents are on the other side of the large crossbeam, you can see how it and the insulation are blocking the way.

Here is the roof plan. The square with X is the turret, the brown is the wall areas affected, the pink area is the room with ceiling insulation rising to block the vents, and the blue rectangles are the positions of the vents. The roof is mod-bit, gently graded with the front (where the turret is) higher and sloping down towards the back. 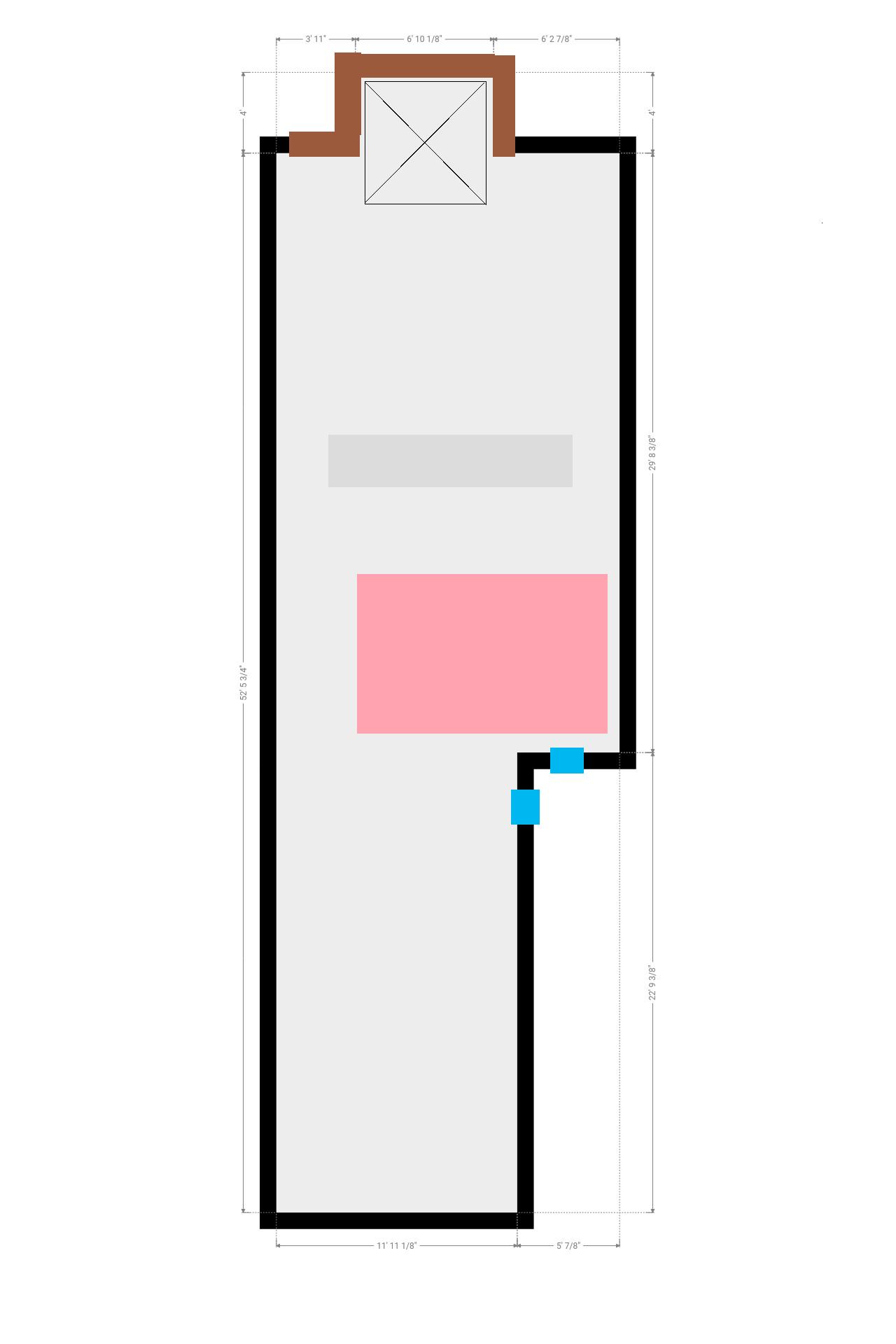 The vents, as can be seen, are pretty close together and are on the wall, not the roof. Here is what they look like: 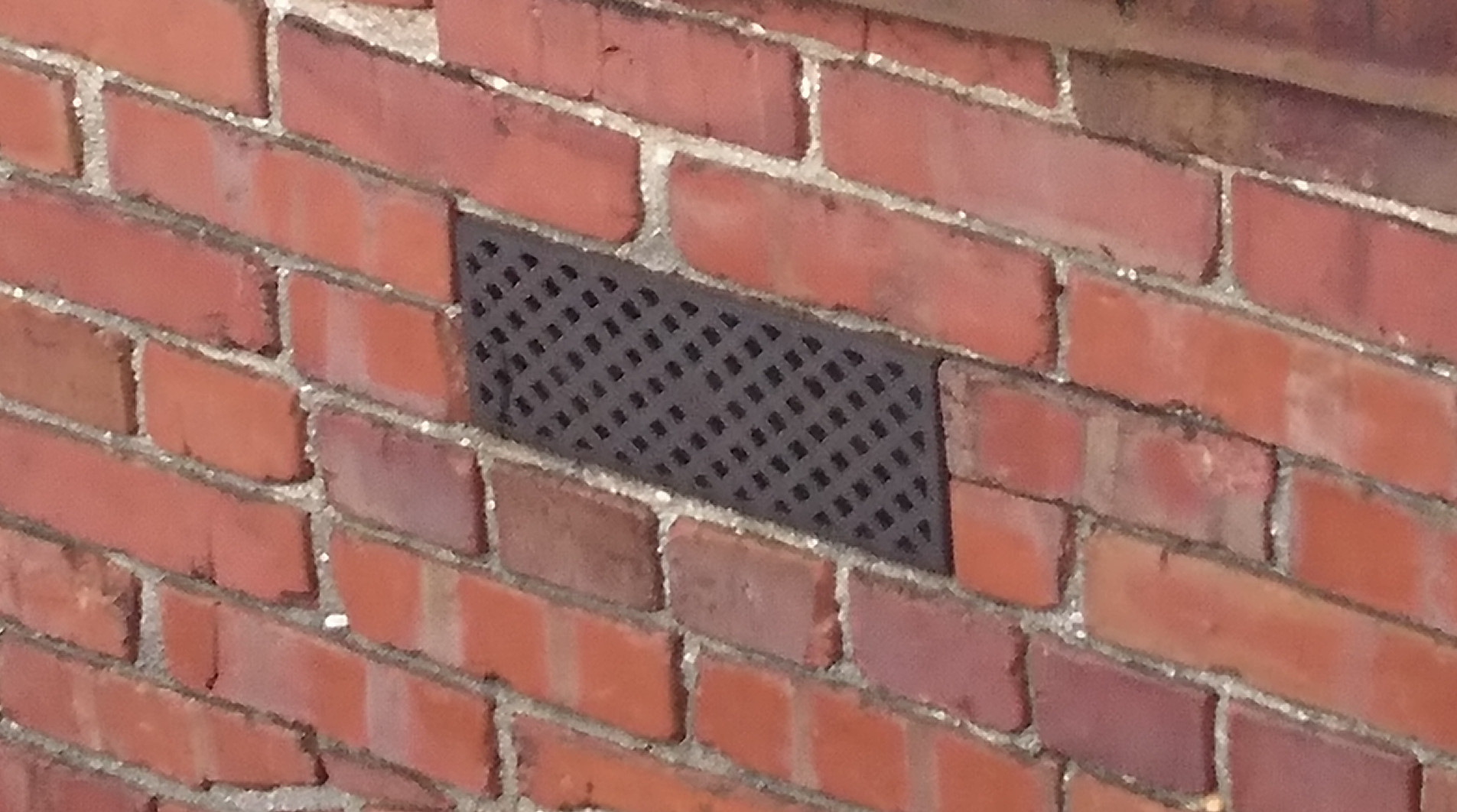 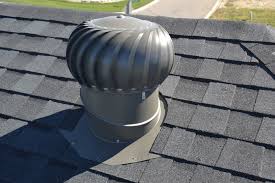 Or should I install both one on the wall (for intake) and a turbine one on the roof, for exhaust? Understandably, due to the position, I am trying to avoid installing a wall one because the access would be really hard. Will a roof turbine (or another kind) be sufficient? Where should I locate it for optimal ventilation? I imagine the graded mod-bit parts of the roof (everything other than the turret) for the ease of installation although the top of the turret seems like it would be most effective. I checked other similar houses in the neighborhood and they don't have these additional vents but I think that may be because their attics are not cluttered with ventilation obstacles like mine.

Your problem , as you noted, pertains to moisture. Specifically, moisture laden air coming from the living space below via small gaps and cracks (ie. conduit and wire runs, vents and register openings cut to large, electric boxes and outlets openings cut wider than needed, window door openings not sealed around the rough opening, there's a few more I can't think of right now).

There's also the issue of attic insulation. The original powdered stuff is a very poor insulator. It won't prevent the heat from the attic or the cool from the living space from transmitting (radiating?) to and from the attic. If I recollect correctly, if warm air hits the cool bricks condensation will form on the bricks in the attic. Maybe not enough to be visible, but enough to be drawn into a porous red brick. I think you know the rest: the moisture contains salts from the brick and mortar, when it evaporates mineral deposits (efflorescent's) is left behind.

The repair is to -seal any passage way's from air infiltration below. Use expanding foam and/or any caulk to fill openings.

-insulate the attic floor. A better but bigger job is to insulate the attic rafter bays. I see HVAC ducts in your attic. Even though insulated the summer heat makes them less efficient at moving/keeping air cool. A radiant foil barrier, I found, works extremely well at reflecting heat from the exterior back out through the roof.

-seal/paint the brick. A clear masonry sealer and/or a masonry paint seals the porous bricks with a moisture impervious barrier. Clear seal on the living space side and dryloc on the attic side.

-an extra turbine closer to the problem area would help as a last additional solution.

Finally, just so you know the powder residue is not a serious problem. That is to say it's not a detrimental fault that over time will effect the integrity of your home. See it as an aesthetic issue.

Lastly, in my opinion the framing, raised pink insulation and vent location and other barriers are not causing this problem.

You are a man who needs a recording moisture meter (e.g. Lascar EL-USB-2).

Your home is far more ventilated than you imagine, and I doubt ventilation is a primary cause here. And if it were, the wood would likely show the signs quicker than the brick.

What is unique about the brick is that it's cold, in a warm house, thus moisture will come out of the air into the first few millimeters of brick.

The missing slate can be fixed with a slate hook. But use a real slate roofer (https://slateassociation.org/ ) or they may destroy the roof. The roofer can look at your gutters and may find the leak for you, which may be invisible from your vantage points.

Is this just a fat solid brick wall? Is there a gap between the outside "cladding" and the interior? What climate zone?

Not the answer you're looking for? Browse other questions tagged roof attic ventilation moisture or ask your own question.

1
Why am I having an attic ventilation problem this year when I didn't last year?
1
How to create a conditioned attic?
1
Attic Venting of Knee Wall in Cape Cod
2
Do I need soffit vents and can I add them without taking the roof apart?
2
Attic ventilation, do I have enough?
1
knee wall no venting possible
1
Attic Ventilation Improvement
2
What type Roof Vent is best to reduce ACU heat load?