I'm trying to identify what everything around my fuse box does, whether or not some of it might be redundant/could be made more compact, and who would be allowed to do the work if so (electrician or power company). This is in the United Kingdom. The reason being that I want to put a new kitchen in this room and would like this to take up less wall space. 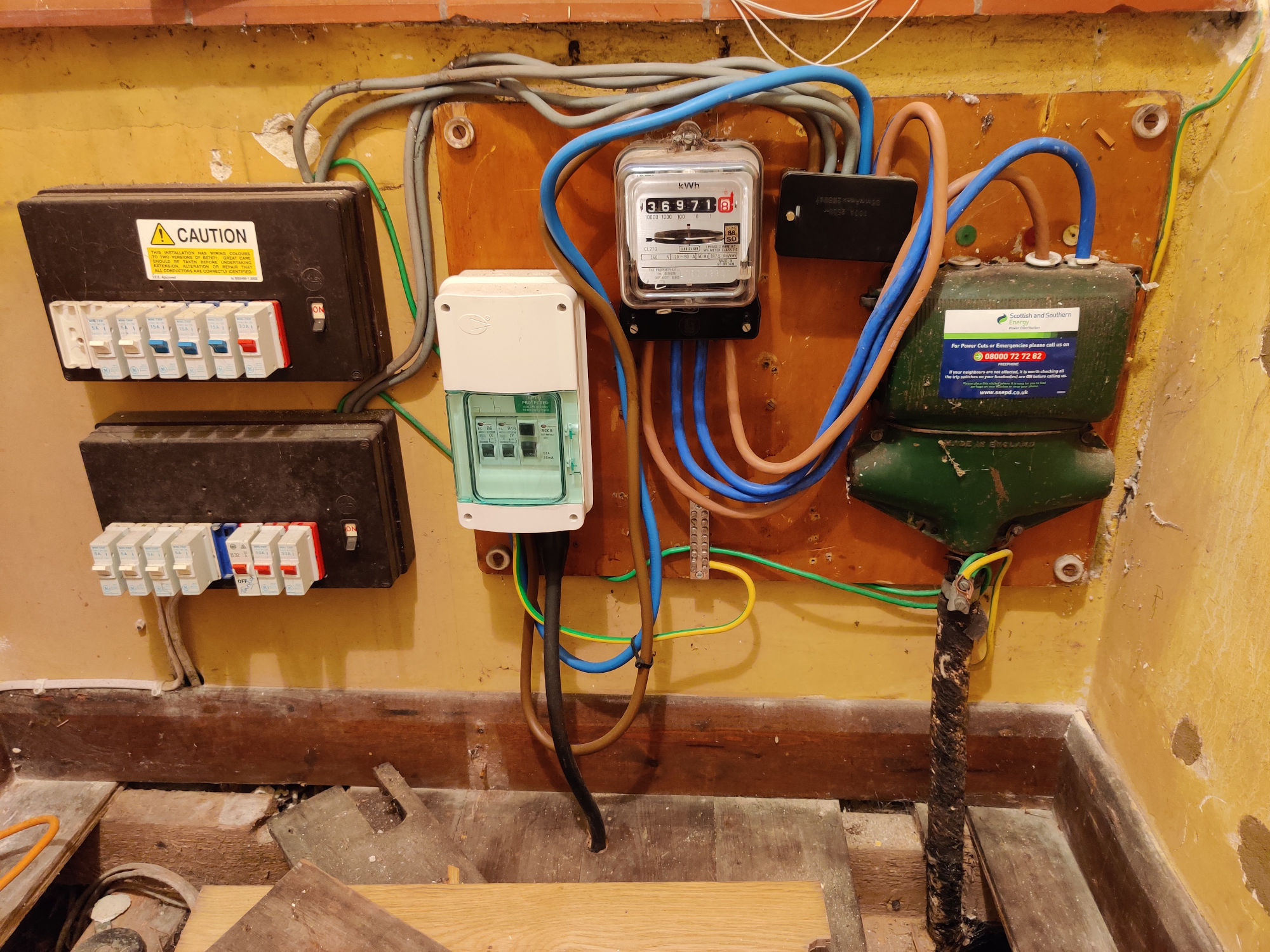 I can see I have the consumer units on the left, and the meter in the middle, I'm mostly wondering what the other two boxes do. One looks like it has an RCD in it, but also two large '400v' switches alongside it - what would be the purpose of these? The big green thing I think is the main house fuse, but I don't understand why both this and the RCD box have lines going into the floor, where would the RCD be wired to externally to this equipment?

The green box in the far right is known as the "cut out" and is where the power enters the property. It contains the supplier's fuse. The "tails" (wires) leave the top and enter a "Henley block", which is essentially a big connector block. From here the power is distributed to your three "consumer units"/fuse boxes. The two brown ones on the left are likely from the 1970s, and the gray one with an RCD is a later addition that serves one or two circuits. The cable leaving to bottom of that box is an armoured cable, most probably serving an outside, socket, shed or light.

The brown consumer units do not support RCDs. Given that these are now mandatory in many situations, the gray box was probably added when someone needed a new circuit which needed an RCD.

If this were replaced and brought up to date all three consumer units and the Henley block would be replaced with a single modern consumer unit with RCD protection.

However, as others have noted the existing cables are in the wall which may limit the.options on where the new consumer unit would be placed.

The power company feed comes up through the floor into the green switch. The blue/brown output goes through the power meter and into a small black splitter box. The splitter feeds power to the RCDs on the left, and the white RCD. The black cable output goes to some unknown equipment. The RCD outputs mostly go back into the wall, however 2 extra circuits have been added that exit through the floor. Instead of relocating all this, how about incorporating a cabinet to cover it and maintain legal access.

3
How difficult would it be to replace these fuses with circuit breakers?
4
How to add a 400v 3 phase plug and/or extra distribution panel with only two breaker spaces left?
1
Add electrical generator breaker to service box
2
Turning on any high-power device trips my RCD
1
Do future electrical works invalidate a satisfactory EICR?
3
Diagnosing faulty kitchen appliances
4
In the UK, how do I run wiring from indoors onto a balcony for a light?
1
Is the electrical setup of my (rental) house safe?