How do I keep my Christmas tree from falling over?

It never fails: I bring home a 9-foot pine, cut the trunk flat, remove the lower branches, and place our Christmas tree in the stand only to have it fall over a little later in the evening.

How can I prevent this "Christmas tradition" from ever happening again?

Get a heavy stand

Growing up, my dad had a traditional stand that looks something like this: 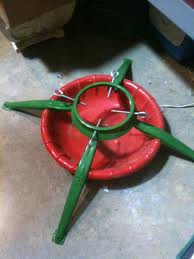 That works for smaller trees as long as you can be sure that nobody (such as a child or pet) will disturb it. That's not at all a given. Remember that trees have extensive root systems that keep them grounded during windy periods and so it's important to get a stand that can simulate the parts of the tree that have been cut off. For that reason, I'm a proponent of a heavier stand such as this one made of cast iron: 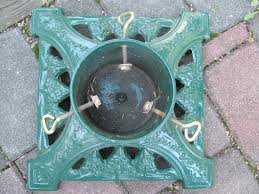 There's something to be said for the simplicity of a really heavy, wide stand that will hold your tree firmly in place. I've been told plastic stands are sturdier than they look when they are weighted with water. They have the additional advantage of holding a gallon of water or more, which means you won't risk a dried out tree. In some ways it doesn't matter what the stand looks like since you can always cover it with a tree skirt. (And my wife insists on it even though I like the way our stand looks.)

Placing the tree in the stand

One thing I've tried is to set the tree up before removing the twine that holds the branches in place. This is a mistake for two reasons:

For the sake of getting a good balance, I also think it's a mistake to attach the stand before putting the tree upright. Or rather, you're going to need to readjust it anyway and it probably won't buy you anything—especially if you have a heavy stand.

Attaching the tree to the stand

Here's where my stand fails me. It attaches to the tree with three screws. Three is the absolute minimum number of points need to hold a trunk in place and it doesn't seem to be enough. If I try to adjust one side, the tree starts falling over and I need help holding it up. (My father's stand had the same problem, but image searches show most of the traditional design have 4 screws plus a ring to hold the truck more securely.)

This year I hit on a solution that's so simple I can't figure out how it didn't occur to me before: I put 2x4 scraps between the screws and the trunk. This has the advantage of spreading the side pressure to a larger area and also makes adjustments easier since the bolts don't screw into the trunk itself. For added security, I packing in extra scraps of wood to brace the tree now that I have it secured to the stand.

Looking around, I see that newer designs use two levels of screws or even "hug" the trunk with a pedal operated cable. I don't have any experience with these designs, but if the stand is heavy enough (see above) they are probably improvements over the three-screw stand that I'm using.

Here in California, we are encouraged to secure everything in case of earthquake. Given the excitement of the season, I like to secure our tree in case of childquake. It's a bit of a hassle, but in years past, I've been glad to have a bit of safety from tree fall when its balance shifted due to watering and decorations. It need not be an eyesore either—the line might be secured to a hook in the wall behind the tree.

I've used monofilament fishing line to attach our tree to a hook in the ceiling. Since the fishing line is designed to be invisible (or close to it) in water, most people won't see it. A bonus advantage is that you know what your line is rated and can estimate how many strands will suffice. If you do fish in the summer, its a good idea to replace your line between fishing seasons to avoid tangles, so this is a perfect opportunity.

I'm going to presume you have a fairly standard type of christmas tree stand, like this one, however much of what I am saying applies to other sorts of standsthat rely on similar mechanics. 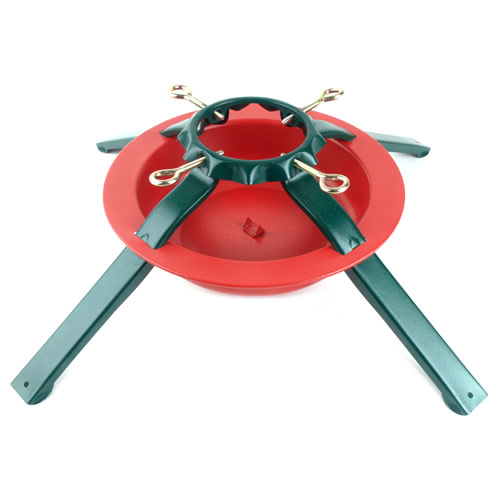 Notice, at the bottom of the stand the little red trianglar tabs that stick up vertically? They are important in preventing your tree from tipping. Before tightening the bolts, you should place the tree trunk in the center of the stand, vertical, and hold on firmly to the trunk of the tree and push downward to insert the red tabs into the base of the tree. You may want to get an assistant to help you push the tree downward if you can't get enough downward pressure by yourself. And if you still can't get enough impact, lay the tree on it's side and use a hammer on the bottom side of the stand to attach the tabs. If you don't push the tree into the tabs, uneven weight of branches or ornaments could lead to excess force on one of the bolts, causing it to gouge out a portion of the tree and cause unplanned tipping.

Then you should double check the tree is perfectly vertical, and tighten the bolts. The bolts should reach into the tree about an inch to be secure, or use an attachment style such as pads or blocks with large flat surfaces that hold the tree like a clamp. Depending on the size of your stand and the diameter of your tree's trunk, you may need to replace the bolts with slightly longer ones to get a tight enough secure fit. We've had to do that before, and it helps a lot if the diameter of the trunk is not quite what you need for the stand, but using a smaller stand would be insufficiently sized. And make sure the tree is perfectly straight before tightening the bolts. Have an assistant hold it straight while you tighten. You don't want to start over on tightening the bolts as it will decrease the snugness of your bolts.

Also make sure the stand you have is an adequate size for the tree you have selected. The base should be broad/wide and a large bowl for water, and (including the water) significantly heavy enough to prevent easy tipping/knocking over. The bigger the tree you have, the more substantial of a stand you will need. The stand I have pictured is rated for trees up to 8' tall, so it may not be adequately sized, weighted, and broad based enough for a 9' tree, even if the tree trunk fits in the stand. One rule of thumb is the width of the stand should be at least 1/3 the width of the tree branches on the bottom level, if not larger.

I dunno, but if you can't rotate the tree once it's in the stand without fear of it toppling, you're doing something wrong.

I find that most consumer stands are junk.

My parents have a great-room with 18' ceilings, so they always have a massive tree. The only stand I've ever seen work to stabilize large trees is a metal ring stand like this one:

I see here that they come in various sizes. This ring stand is easily covered by a decorative tree blanket. My father set up boxes covered in craft-paper and did a little christmas town screne thing under it.

You can easily level the tree with wedges under the ring.

I have recently had your dilemma. It wasn't pretty. My solution was to cut two one inch discs from the end of the tree trunk. In my case these were discarded in the garage. I used these discs as shims/wedges between the screws of the stand. It made the tree more secure and so far the tree has held firm. By the way I only placed the discs/wedges on either side of the tree the way it fell.

Not the answer you're looking for? Browse other questions tagged safety interior or ask your own question.

1
Using a charcoal BBQ, how far should I be away from the house?
7
How can I keep leftover drywall mud from drying out in the box?
2
Alternatives to extension cord over the grass to light a Christmas tree
0
How do I best display LED strips so the bulbs are hidden from sight?
2
How can I magnify, intensify, and redirect the light from a skylight so that it is most effective?
1
How can I stop a board from “leaking” sap?
25
How can it be dangerous to feed a water heater from two separate panels?
2
How can I safely remove a large fallen tree?
3
Are chainsaw helmets meant to protect you from the saw, or just falling debris?
0
Why are U.S. residential circuit breaker service panels so poorly designed?