What do you call a door-attached bar for hanging belts?

Closet doors, particularly those for the closet section which houses a rail with hangers, often have a sort of a cylindrical bar attached to the inside of the door. A thin bar at a short distance from the door, but covering most of its width, on which you hang belts or ties.

My motivation is, as you might have guessed, having a closet which is missing this device and wanting to get one. Hopefully I won't have to settle for something like in the picture.

I was wondering whether this fixture has a name - a single noun or a phrase - that is commonly used.

(This is actually not such a great example, because what you're seeing here is an IKEA Grundtal bar intended for the kitchen.) 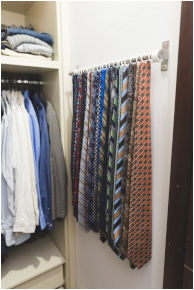 It could be a number of things.

You could make one out of pipe or a wood dowel.

There are no rules for your closet, come up with something that works best for you. It could be as simple as a piece of wood with some hooks screwed into it. (have the home center cut the wood to length, not tools needed except to screw it to the wall/closet door)

Not the answer you're looking for? Browse other questions tagged closet terminology hanger or ask your own question.