I have a woodworking shop with 3 - 240V outlets. I recently had some electrical work done in the house and now one of the outlets doesn't work. Testing the 2 working outlets (see below) I get 120V between ground and both legs and 240V between the two legs. But if I test the non-working outlet I do not get the 240V between the legs. Is this something I could fix easily or should I get an electrician to come back out and fix it? 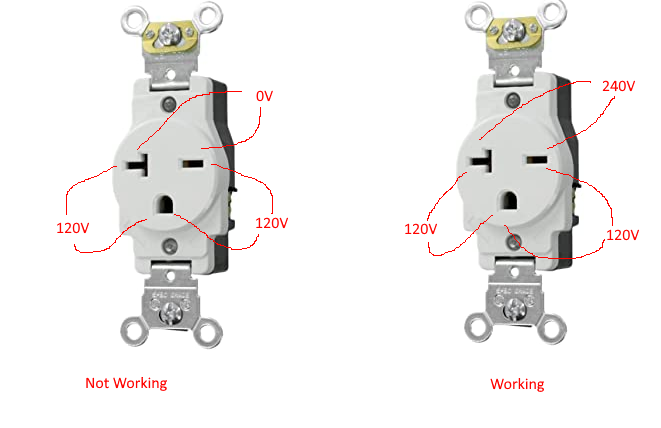 Electrical panel, I switched the two 240V circuits off to better highlight which circuits I'm talking about. The bottom right breakers go to a second panel... 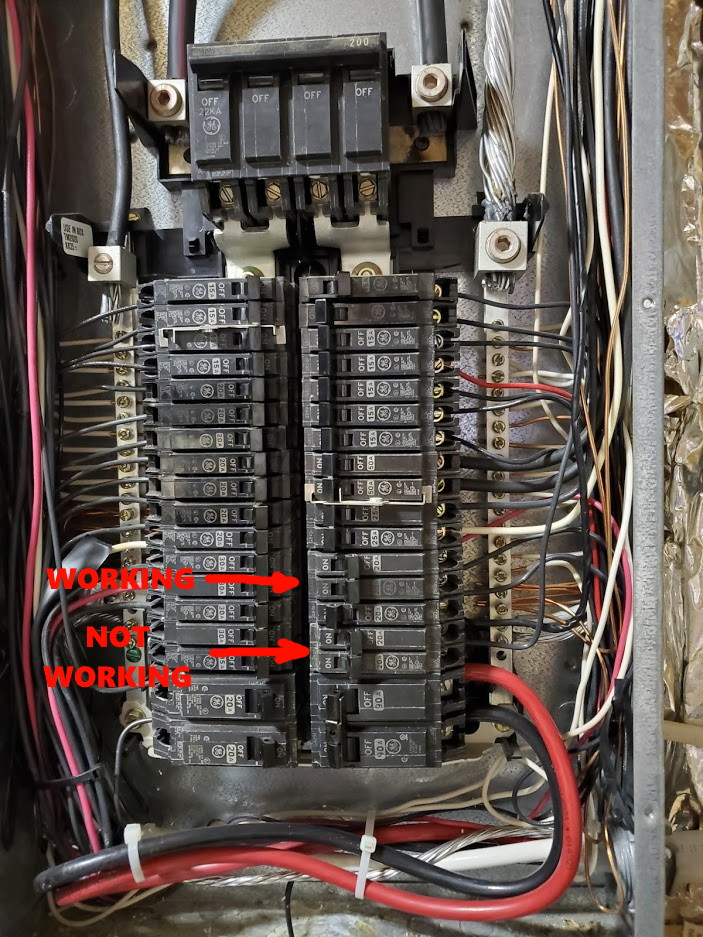 Dead panel and info sheet. Sadly it looks like the info sheet needs some updating. 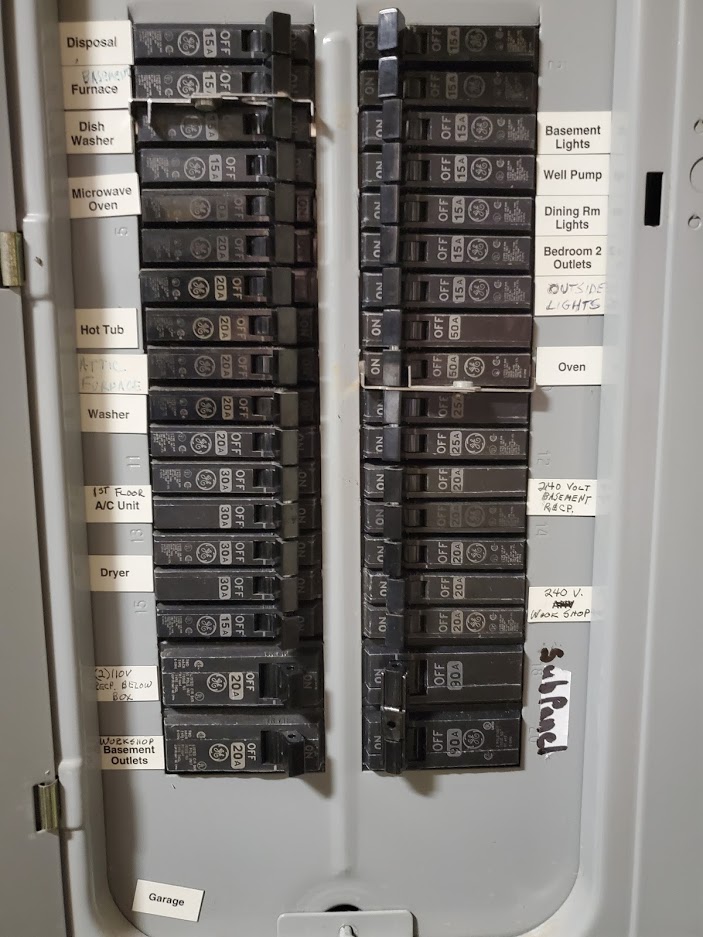 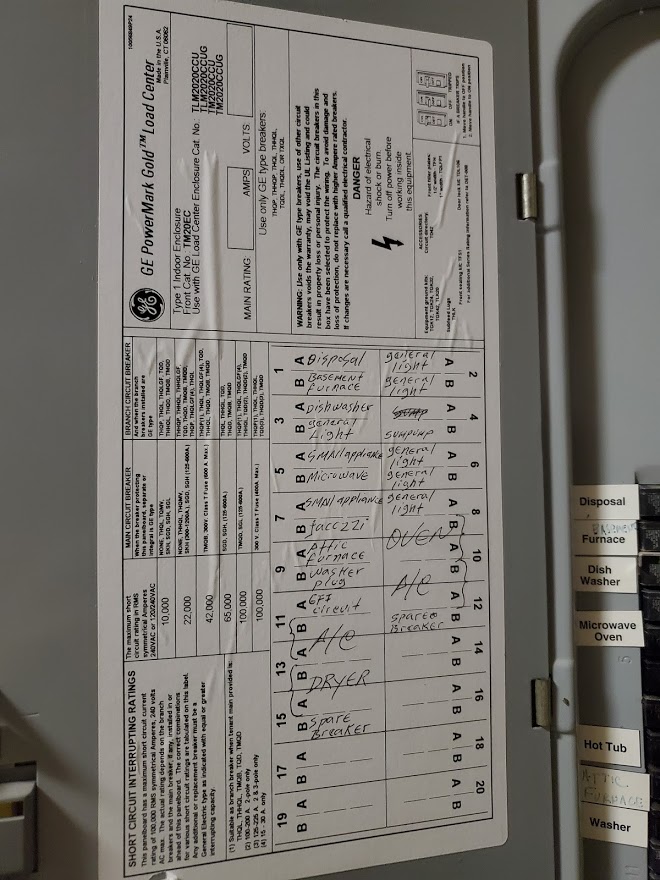 This panel has 20 spaces/40 circuits. The spaces alternate (by row) between the 2 hot legs. The "A" and "B" within each space are on the same leg.

All the voltage readings you've made and the pictures match.

The problem likely happened when the electrician moved something else and did not realize these two breakers needed to be a pair on opposite legs. Why didn't they realize it? That's a good question. They should have figured it out by looking at looking at the wires, but since they are loose wires in conduit rather than cables, that is not immediately obvious. They should have figured it out from the panel labels, but those are often wrong. So that just leaves the breakers themselves.

To fix this, if the non-working outlet hots are on the same phase, you need to move one to an opposite phase. In fact, if that's the case, it's a major screw-up. Both hots on a 240 volt circuit need to be on the same double pole breaker. Lots of speculation on my part here. Pictures of the panel with the cover removed would help. I probably should have posted this as a comment, but I had too much to say!

Your electrician must have moved breakers around so that the "bad" ones are now on the same phase.

However, all your breakers except the four at the bottom are "tandem" breakers, they are half-height breakers that occupy the space meant for 1 breaker. There is nothing wrong with this, except that the rule of thumb to use adjacent breakers for 240V is based on full-height breakers. You can clearly see the problem in the following picture. 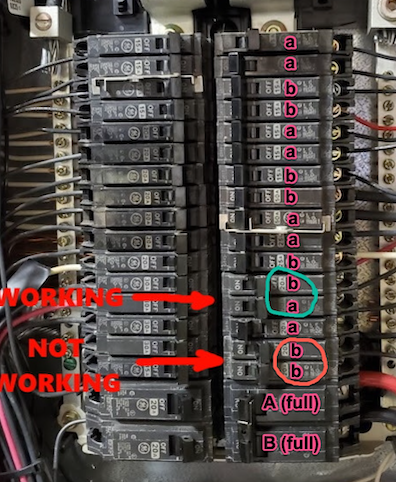 The single half-height breaker located between your good and bad 240 circuits throws off the pattern.

The solution is to move the bad ones up a half-position, and the intervening one down next to the sub-panel breaker.

Also, the two breakers on a 240V circuit must be bound together so they both trip together. I think I see a pin joining the two "working" ones. Harder to see with the "not working" ones but please double check that every pair of breakers controlling a single circuit are joined up that way. The one feeding the sub panel is much more obviously joined with a clip.

Whoever was last doing electrical work on this panel probably shouldn't be invited to return for more, given what they managed to screw up with your shop circuit. Your GE panel, instead of using tandem breakers (2 breaker mechanisms in a single pole frame) for "double-stuffing" the panel, uses a half-width breaker frame instead, and your panel is indeed loaded mostly with THQP half-width breakers.

This is fine as long as you're dealing with 120V circuits; however, a 240V circuit requires two breaker poles that land on adjacent bus stabs. For full-width breakers like the 90A subpanel breaker in the bottom-right, this is trivial. However, half-width two-pole breakers like the ones used for the two 20A circuits for your shop require a bit of care to ensure that they end up straddling two bus stabs, as the breaker for the working circuit is doing, instead of being crammed onto a single bus stab in the fashion that was done for the breaker feeding your broken circuit.

GE CTL panels such as yours, furthermore, have a rejection feature in them that should prevent the last installer from doing what they did. As a result, either your faulty 240V circuit was fed by a pair of handle-tied single-pole half-width breakers (which the rejection feature can't stop from being mis-inserted), or the installer must have done something sketchy to get the breaker to fit where it didn't belong.

So, I would ask the electrician to pack a couple of THQP120s, a TQLFP1, and a THQP220, and have them move the faulty 240V circuit over to the bottom-left of the panel between the two existing 20A 120V circuits there, replacing the existing 20A breakers in the process. They then can plug the hole left by removing the old breaker with said filler plate since we don't know if that bus stab's even usable any longer after potentially being abused by the prior installer.

Not the answer you're looking for? Browse other questions tagged wiring 240v or ask your own question.

8
What are my options for installing 240v receptacles in an attached garage?
1
240v outlet not delivering 240 volts
1
What could cause a 240v dryer outlet to have proper voltage but not power the dryer?
22
240v Outlet with 120v and 215v - How?
3
outlet not working but grounding screw is hot
12
Can I use a neutral wire from another outlet to repair a broken neutral?
2
Can I integrate a 4800W heater into my current garage electrical setup? I seem to need too many circuits
9
Are there safety concerns or code violations with my garage sub-panel?