Have a Rheem "Everkleen" 50gal water tank. Water is heating fine, but fear ive let it go too long. Have not drained it since the house was built in 2008, yet another thing Ive discovered that needs maintenance around a house. Tried to test the pressure relief value and it wouldnt budge. There is pretty heavy mineral content to the water here, especially chlorine. Should I leave it alone or use a little "extra" with a tap from a pair of pliers etc? Last thing I want to happen is start it to leak. 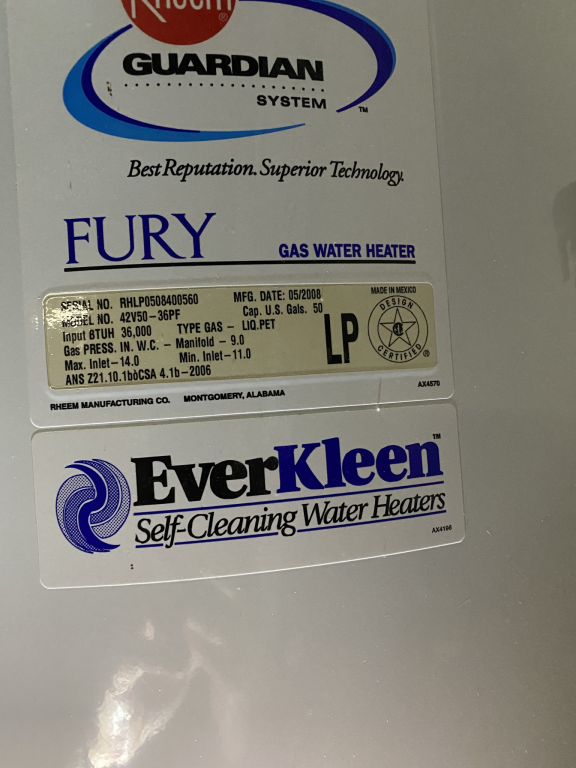 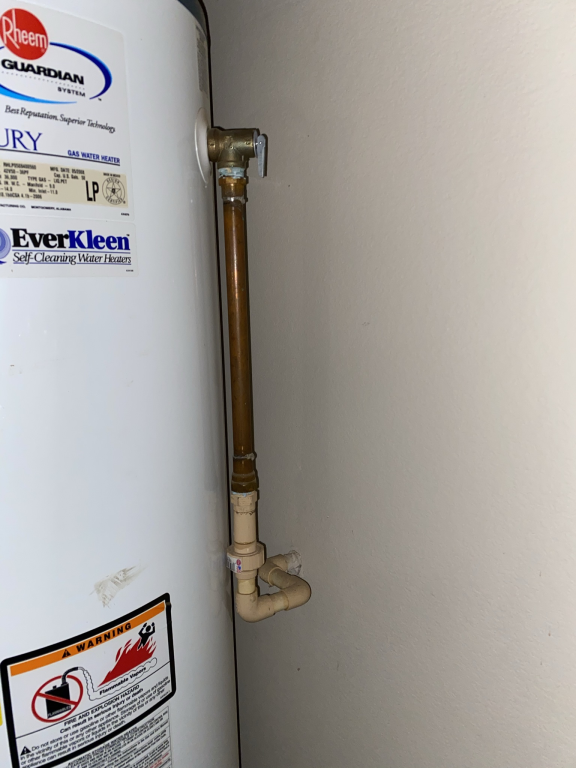 You should remove and replace the valve. If you cannot open it using the lever chances are good that it also will not function properly when needed. So you have a dangerous condition.

It looks like you have limited space to work in so you may need to remove the downpipe from the valve before you can remove it. But a new one is cheap insurance vs. a thermostat failure leading to a rupture or worse.

I'll answer this with the example of my own experience just this year.

I had a similar situation with my 14 year old water heater. I used a pair of pliers to open the valve, which didn't really take much. What I didn't realize is that it didn't seat again. I had water dribbling out constantly, but I mistook it for the AC since it was in the same location as the drain for that in the outside of my house.

A couple months went by and I kept an eye on it. It didn't get worse, but it didn't get better. I finally realized it wasn't the AC when it cooled down enough for it to not be running nearly continuously.

I ended up getting another valve at the local big box home improvement store and went to replace it. I have more than enough tools that I figured I could manage it fairly easily. The problem is that not only did the internals of the valve get crusted with calcium, but so did the whole end of the valve inside the tank, including the threads. As much as I tried, I couldn't get it to budge. I ended up breaking the outside housing of the valve many times.

This was just supposed to be a temporary repair to get me some time before I replaced the whole thing. I ended up just getting a tankless water heater instead of fixing the valve. It's what I wanted anyway, just sooner than expected. (I had that professionally installed, since I knew I didn't know enough to get that completed correctly.)

Moral of the story

At 12 years old, your water heater is likely due for replacement. At least consider it, but 2020 has been, um well, not kind to many people's finances, so it's understandable if you don't want to go "all in" at this point.

If you have reasonable plumbing experience (asking a question like this leads me to think you don't), you can try to replace the valve yourself, but you're risking a similar situation I ran into, where you damage the valve enough that it becomes less safe than it already is.

I'd suggest calling a licensed plumber and have them do it. They will not only be able to do it quicker and with fewer problems than you (or I) likely can, but they'll have the experience to know what to do when/if problems do come up. They can also advise you as to how much longer you can safely and efficiently keep that heater.

Edit: Also, the plumber will know which one of 3-4 valves to use for your water heater. When I went to the store, I had a picture of the valve to try to know which one to use, but the external valve looked very similar between several of them, except they all had different body lengths for inside the tank. I picked the one I thought might work, but IDK if it actually would have.

16
How do electric hot water heaters explode and what can be done to prevent that from happening?