Grounding Pin is Stuck in the Outlet

The grounding pin of my extension cord broke off in the outlet when I unplugged it.

Is it safe to use pliers to pull the pin out of the outlet?

Will I get shocked?

You'll want to turn off the breaker. You should be alright but if the internals of the outlet are damaged or broken, you don't want to come in contact with them when you pull out the ground plug. You might even want to replace the outlet since the grounding terminal shouldn't just break off under normal use, unless the extension cord was really damaged.

The ground pin is safe to remove with pliers. The ground will normally only have power on it in a fault condition or if you have electronic switches no neutral that use the ground but even then it is safe with un insulated pliers most metal lamps and devices the metal is attached to the ground and we don’t get shocked by that.

Turn off the breaker for that outlet, it's the only way to be sure you're safe. If you don't know which breaker controls that outlet then plug in a lamp, turn it on, and go hunting for the breaker. As far as I know lamps commonly use only 2 prongs so the ground pin should not be an issue.

If you can then remove the prong with pliers and turn the breaker back on.

After doing so test the receptacle with a receptacle tester like this: 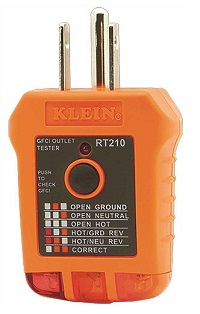 It will tell you if the broken prong has caused any immediately obvious issues.

If you fear hidden damage that might not make itself known until a future date then it's fairly simple and cheap to replace the outlet. Once again, turn off the breaker before attempting this.

Pro-tip: take picture of both sides of the outlet before replacing it. I have seen far too many posts on this site where someone disconnects a rat nest of wires in an outlet or switch and then asks the community which wire goes where.

3
Is it dangerous if the ground pin of a 3 prong plug breaks off in the outlet?

2
Is it possible to detect from the power outlet if there would be current that needs grounding?
3
Is it dangerous if the ground pin of a 3 prong plug breaks off in the outlet?
0
How to wire a three-prong extension cord to 110 outlet?
3
Window unit AC get outlet and plug hot
1
Portable Generator Grounding
0
What should I do if I get my adapter prong stuck in the outlet?
2
The plug for my laptop is slowly changing colour, is it still safe to use until I get a new one?
1
Is this normal - Electrical outlet - make hot prong on cable a tiny bit warm