First issue was that upon removing the old switch I had 4 wires, but 2 were twisted together and connected to the ground screw. 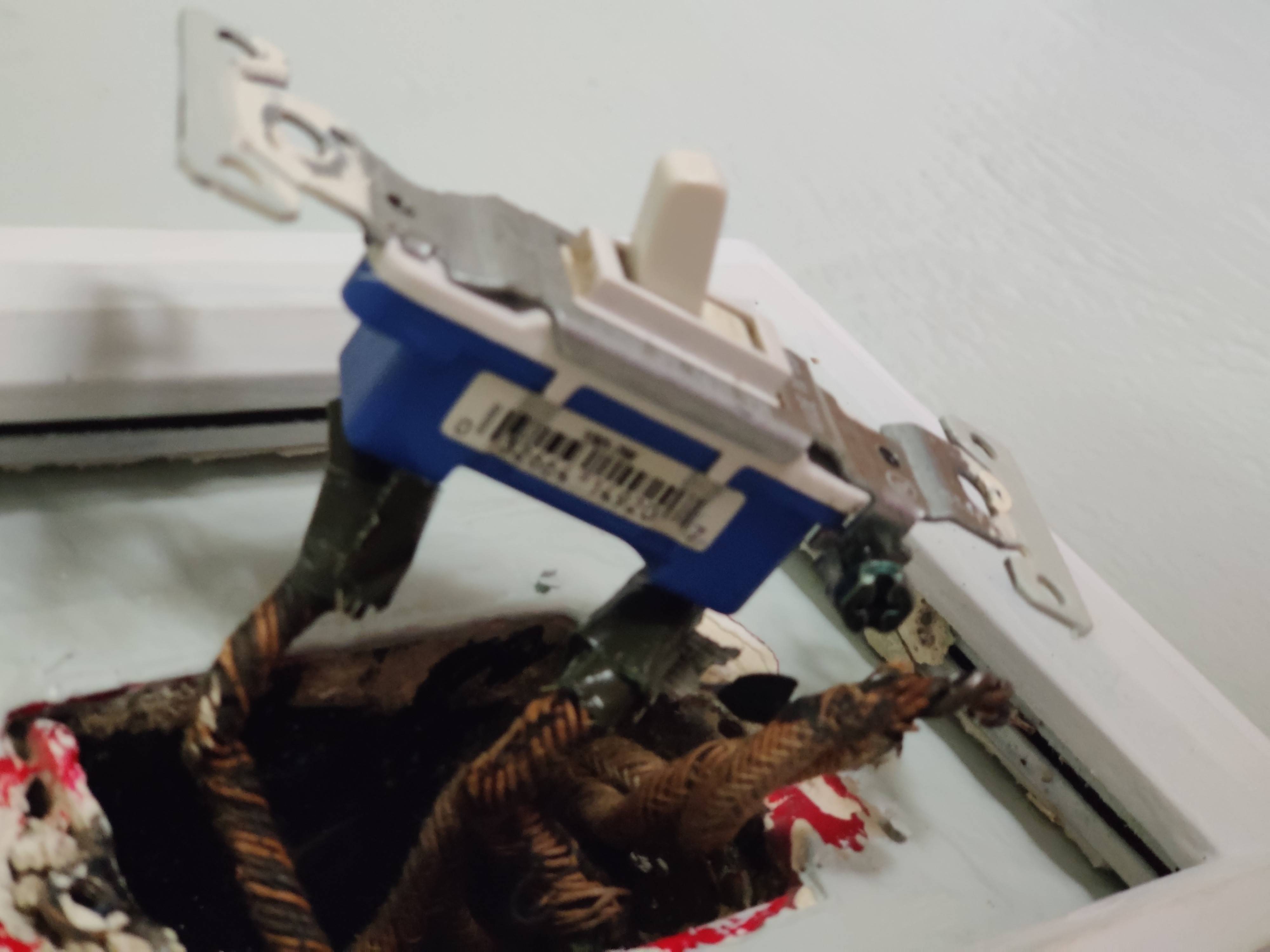 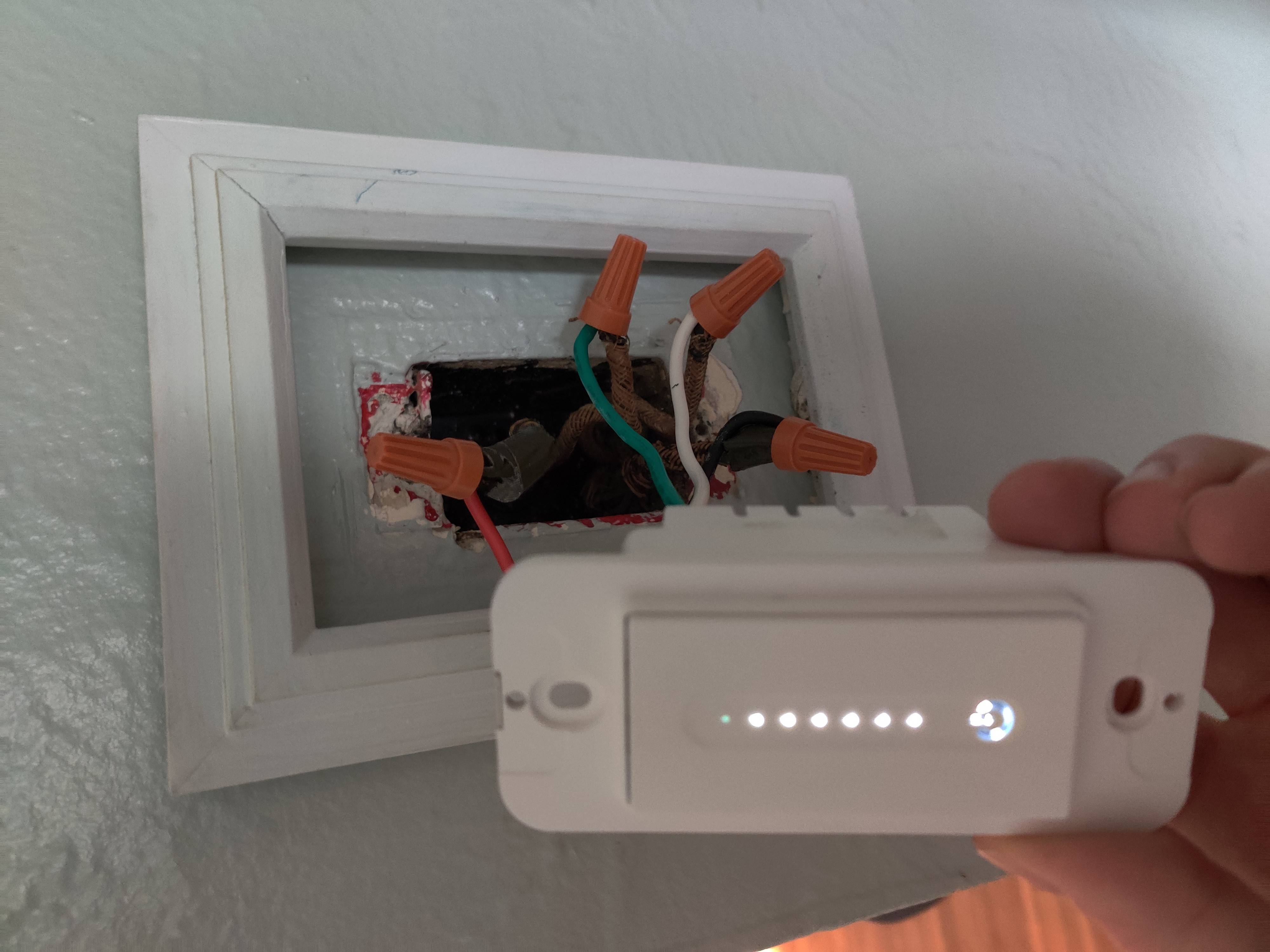 The Gosund app found the switch and connected, the dimmer lights respond as you slide your finger up and down the dimmer, everything seems great.

I have no idea how to proceed.

The first rule of electrical for novices is don't experiment. Don't just toss wires around hoping for a positive outcome. The reason is simple: lots of combinations will work, but will kill you. So stopping at the first one "that works" is Russian Roulette.

Nothing should be done without knowledge or reasonable expectation. This requires skill and experience, and there's simply no substitute for that. Fortunately you're here.

Now, this started with a cognitive bias: that since Gosund needs certain wires, surely they must be there. Can't assume that.

The two wires that were previously joined need to be joined again. They're not spares, they were already doing a job, and separating them broke that job.

Wires in the box

Cranking the gamma in Photoshop told me a bit about what's going on in the back of the box, but a flash photograph up close could be more helpful. (DO NOT disconnect and splay out every wire - generally every cable comes into a box anonymously, and the data about the function of the wires is stored in how they are hooked up.)

So that aligns with the two white-ish wires being found already hooked together. I am appalled to see them on the ground screw of the switch, but there might be a reason for that - there may be a viable ground back to the panel, and they may have stolen it if they had a wire problem with the supply-side neutral. Very dangerous but you can't fix stupid.

So my guess is the two "white" wires are neutral. In a typical switch layout, they are already doing a job, so tied together they must remain. A smart swiich neutral can be added to the pair.

Safety ground wires are bare, green, or yellow with green stripe. If you don't see that, then it's not a ground wire. However, metal junction boxes, metal conduit and metal armored cable jacket can also be viable grounds. Note these junction boxes are metal.

With metal conduit or metal jacketed cable, ground reaches the box via the fitting. With a ground wire into a metal box, proper procedure is to attach the ground wire to a screw in the back of the box. The metal box gets grounded first.

The metal box can pass ground to switches via the mounting screws and the metal yoke of the switch (the wings that the screws go through). Your switch appears to have a plastic yoke, that is a red-flag. How did UL approve that? Fair chance they didn't -- there's a lot of uber-cheap crud coming out of a certain Asian country, and they market the daylights out of it on Amazon. Look for a UL, CSA or ETL mark with a file number. CE is usually fake, and FCC and RoHS are meaningless. If it isn't approved, back it goes.

Note that you cannot pass ground to a receptacle via the screws, unless they are labeled "self-grounding" (which is all that means; grounding through screws OK)*. In an older house like this, make a habit of using "self-grounding" receptacles.

What I would do

It looks like you either don't have a ground, or it's the metal box. Most metal boxes have a hole tapped for a #10-32 screw, for grounds. Ground wires can be attached there if the box is grounded.

The neutral is the 2 wires tied togeher; neutral gets added.

Now you need to distinguish supply (always-hot) vs lamp (switched-hot). The good news is, guessing wrong here is safe. So pick a black wire from the wall and hook smart-switch supply/Line to it. If you got the right one, the smart switch powers up. Since the smart switch has neutral, it doesn't need the lamp wire to be wired.

Then it's a victory lap to hook up the remaining wire.

* and certain other rare conditions you don't have.

Not the answer you're looking for? Browse other questions tagged electrical dimmer-switch smart-switch or ask your own question.