I recently had a deck built. The deck has a few places where double joists are used between beams to allow cutouts for trees. The framers used single joist hangers for the 2x6 16" oc joists.

On the doubled member they just added another member to the joist that was already hung with a single hanger. Is this common practice? - I would never have thought of doing that.

Blue arrows to area with doubles framing around tree. 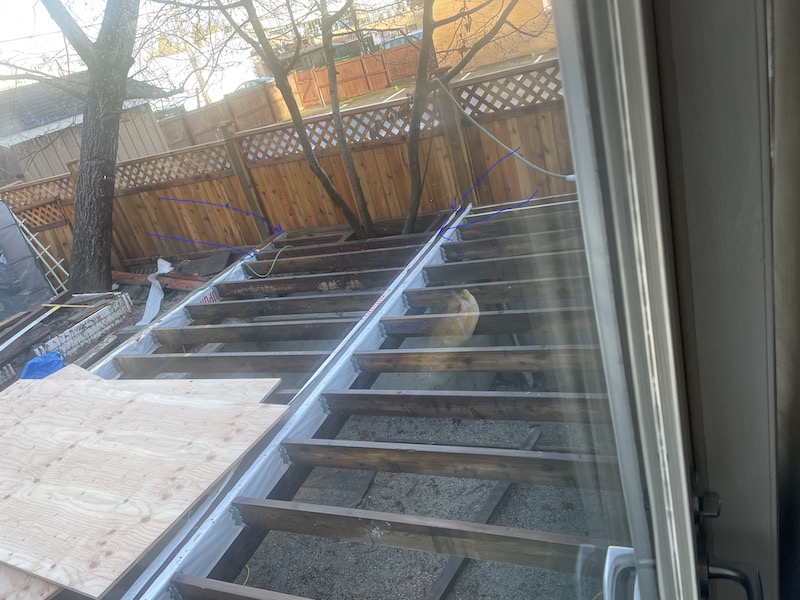 No, it is lazy. A double joist hanger should be used for a double joist with few exceptions. Whether it is legal or not depends on how your state and local community have developed, adopted, and interpret building codes. From a structural standpoint it may be insignificant under certain conditions.

Is it worrisome: an engineer would be your best source but generally no if the structure is maintained and you inspect it regularly. Joist hangers are a component of a system and their absence or improper installation don't mean catastrophic failure by themselves. It is not uncommon in older structures to see double joists tied into single joists to avoid an obstacle. All without hangers.

Not the answer you're looking for? Browse other questions tagged framing deck joists beam hanger or ask your own question.

5
How to install 2x10 joists of slightly different sizes?
0
2x6 deck joists: salvageable or need replacing?
1
Understanding deck spans for beams.
1
Can I frame over an existing deck with a new deck to raise the level?
0
Need Tree Platform Build Advice
0
How can I correct a gap between joists and a beam on a new construction deck?