Does an Electrical Metallic Tube (EMT) Inside Corner Pull Elbow count towards the 360° total bends?

When running EMT, my understanding of Code is that the conduit cannot contain more than 360° in bends. If more bends than that are needed to complete the run, a pull box is required.

Do angle fittings such as this inside corner pull elbow count towards the no-more-than-360° rule, or are these considered a pull box/pull point? (I see "pull elbow" in the description of the product, which leads me to believe they do not count towards the 360° rule, but I don't want to make assumptions). 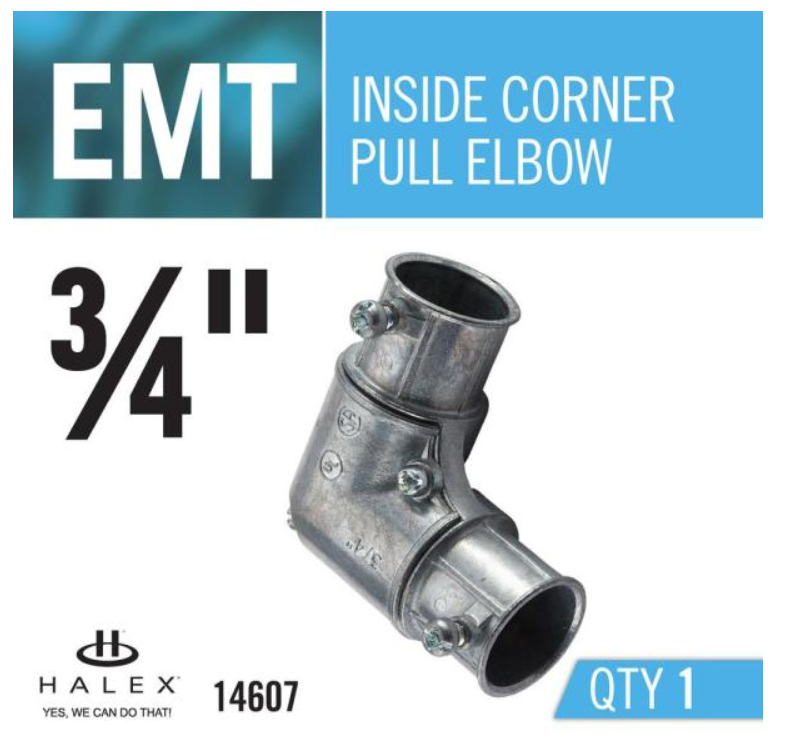 That's a pull point, albeit a possibly miserable one in practice. The latter bit being "informed opinion" as a frequent user of conduit.

As such, it "resets" your 360° (practically speaking, try to stay at 270 or less when possible - it meets code and there's less swearing involved.)

Only if you pull from there

If you're not actually using it to pull... then you can't use it at all. This turn is far too tight to pull around. It will simply tear the wire.

If you're actually going to use it to pull... then this not only doesn't count toward your 360, it resets your 360! Say you have

However, a inside corner is a BAD place to pull.

And this thing, which is a pulling elbow with side access, is a red flag for a thing you should really, really try to avoid.

An inside corner should be a sweep.

The better place for conduit bodies and pulling elbows is outside corners. In those locations, the normal lids will suffice.

Remember, you build the conduit empty. Only pull after it's finished.

This business about 360 degrees and access points isn't some arbitrary rule you must memorize and do for no reason. It's there specifically because conduit must be pullable. (or else it isn't conduit). The litmus test of "pullable" is that you actually do pull the wires into it.

Code requires you build (and finish) the physical conduit work before you pull a single wire. That pretty much "holds your feet to the fire" to build conduit properly.

5
Do separate pieces of EMT conduit qualify as "pull points"?

5
Bending wire versus cable
1
Can the sheath of nonmetallic cable be removed prior to entering electrical metallic tubing (EMT)?
5
Do separate pieces of EMT conduit qualify as "pull points"?
3
Transition PVC outdoor conduit to EMT
5
Cat 5/6 in same conduit as power: is NM-B required, or is THHN acceptable?
6
Garage exposed NM wiring - protection?
0
What fitting do I need to ground EMT at my residential electrical panel?
5
How do I run the PVC conduit into a garage with a ground-level foundation?