I’m hoping to transform my basement into a home theater space.

While there’s a lot involved in the project, the primary scope involves (see pictures below):

To create the projector niche, I can’t go “backwards” (behind the existing drywall) because there’s foundation right behind the wall studs. I need to create a new wall that is 6” forward (from existing) in order to have the space to frame the niche. I say 6” because I’ll have a soundbar that is 4.5” deep that will sit on the bottom of the niche, so I’m planning using 2x6 framing lumber.

So, with that in mind, my primary questions are as follows:

As an aside (as it may impact answers to questions above), while I’m doing this work, I figure I might as well remove the popcorn ceiling. While I’d normally wet and scrape, I can see seams showing that would probably appear as cracks without the “popcorn”. So I’m planning on taking the ceiling out and installing new drywall reinforced with liquid nail.

I’m also on the fence about extending the existing ceiling “bulkheads” to create a coffered ceiling (or ceiling soffit?), as it may add to the home theater aesthetic... 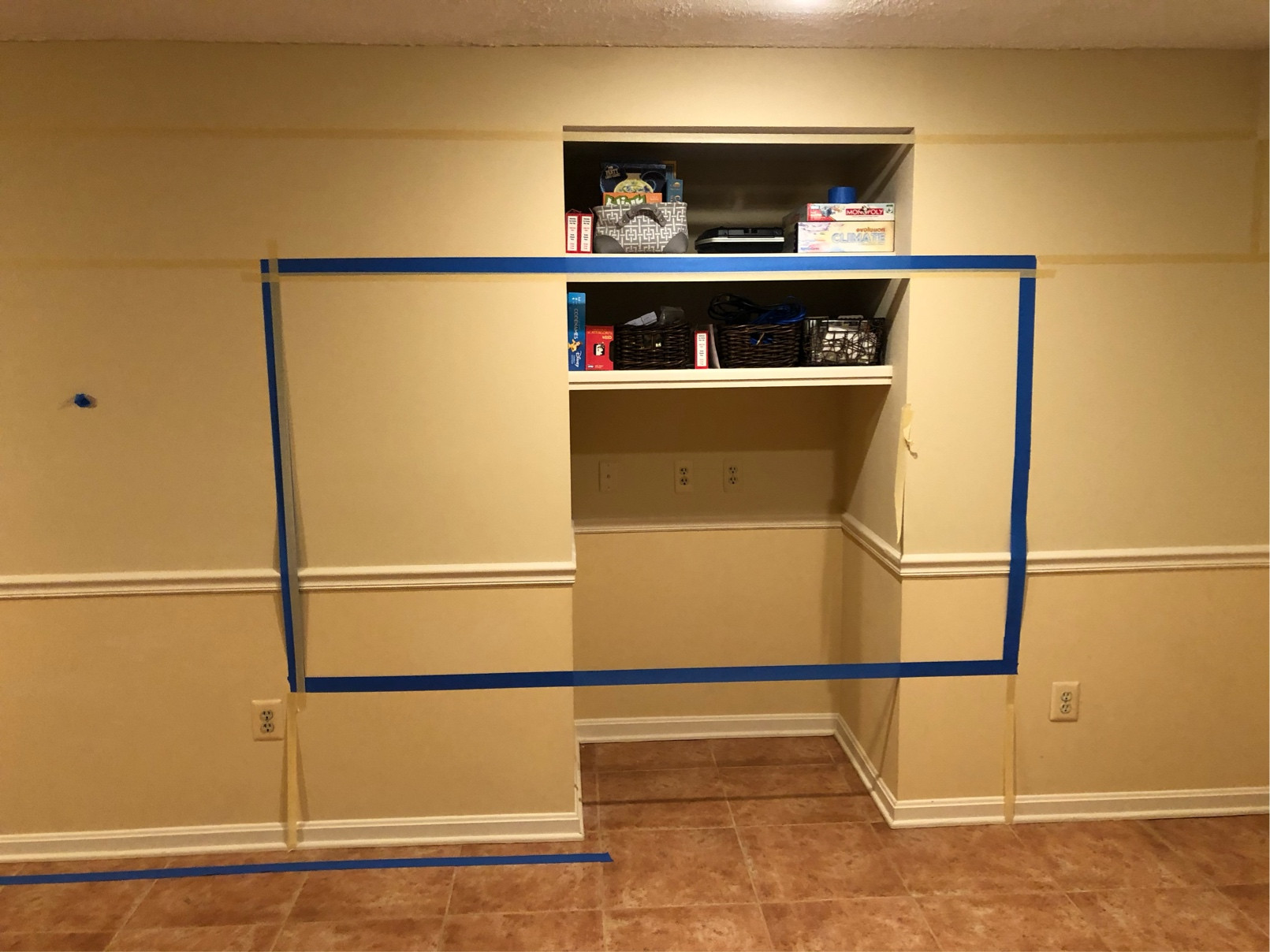 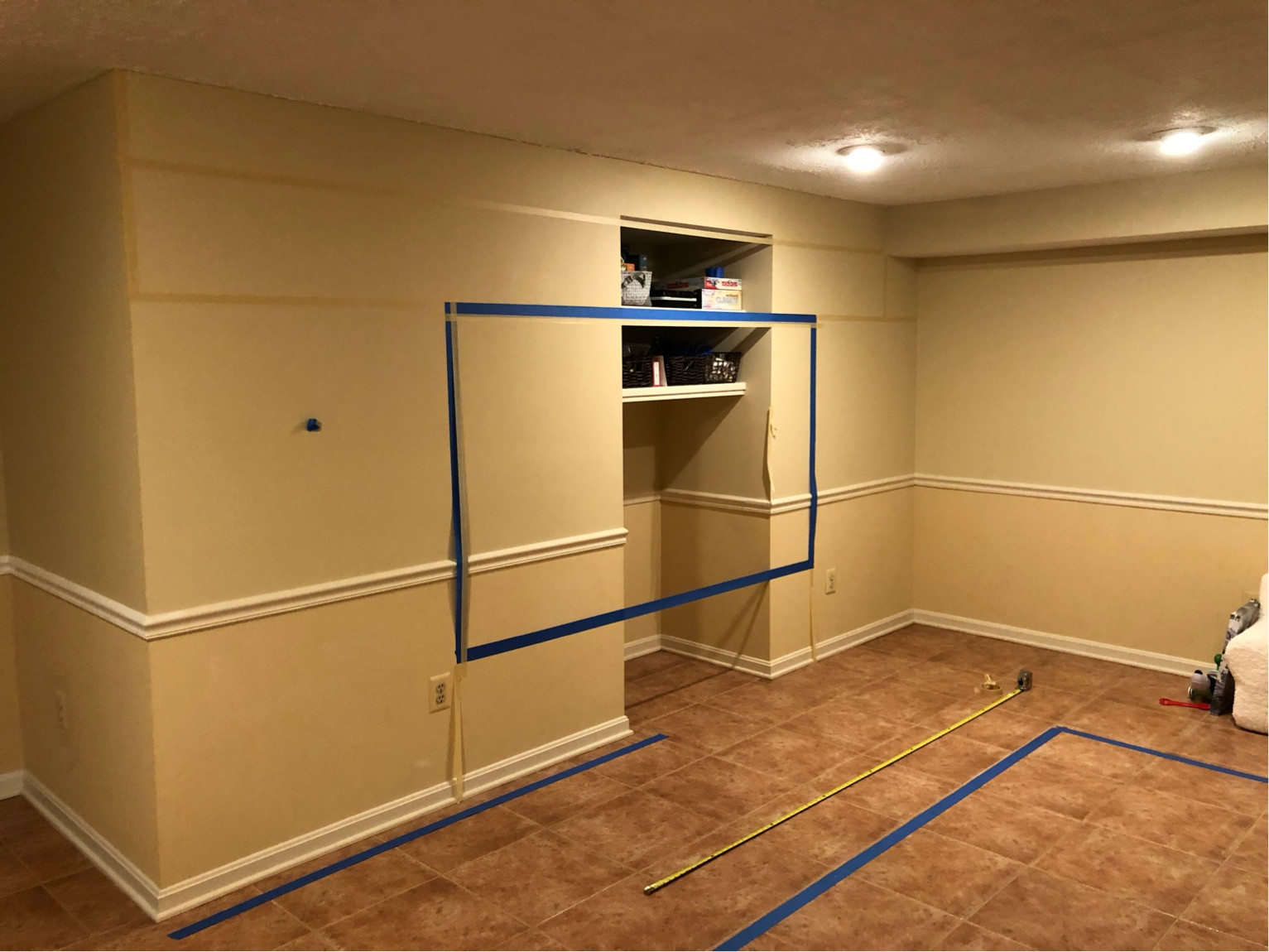 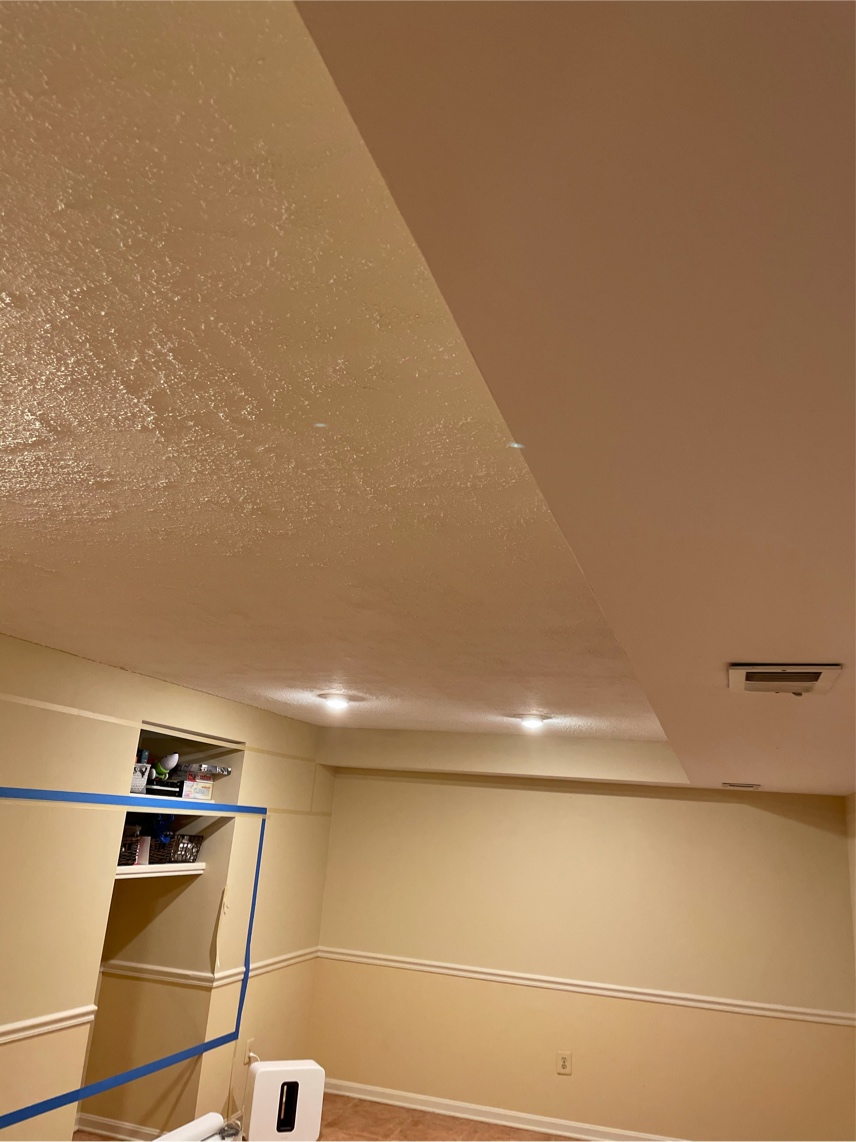 This looks like a fun project. I want to start by linking a few great books I own and like. They're well-illustrated and you can find them in many home improvement stores & libraries. These will really help you a lot since you are new to framing and maybe electrical as well.

With that said, personally, I would demo the existing wall rather than leave all that drywall & electrical inaccessible. I'm not aware of any requirement to remove the old wall; it's just what I would do.

You mentioned using 2x6 framing lumber to build the new wall. That is unnecessary; you can use 2x4. Your new wall should be secured to the "ceiling" (really, joists or blocking above the ceiling) and the floor. It doesn't necessarily need to be in contact with the foundation wall or the existing finished drywall (even if you don't demo it.) Therefore, the extra depth of 2x6 lumber is not beneficial.

You ask, What’s the best way to secure the new beams to the old beams?. Both the "Basements" and "Walls & Ceilings" books cover this with illustrations. But basically, there should be joists above the existing ceiling, and you want your new wall to be secured to them. If they run parallel to the new wall you might add some "blocking" between two joists and then nail your new wall to the blocking. The pictures in those books will help a ton.

A circular saw is a good choice and a great "first saw" for someone getting into serious DIY projects like this one.

You won't need a table saw for this. A miter saw might be helpful for a few cuts when you're ready to install new baseboards, chair rails, or other trim; but don't buy a huge 12" miter saw; consider renting one unless you're sure you will use it again. They take up a lot of space.

Not the answer you're looking for? Browse other questions tagged drywall framing ceiling or ask your own question.

5
How should I run speaker, HDMI and electrical wiring for my ceiling mounted projector theater room?
4
How do I install a non-load bearing wall on a carpeted concrete floor and finished drywall ceiling?
0
popcorn ceiling in old building but ceiling looks new- asbestos worries
1
What does a novice DIY'er need to know before building a wall higher than 8' (14.5' feet to be exact)?
2
Should I use traditional 2x4 framing or 1x3 grid framing for a New England basement remodel?
5
Supporting a fan in second (fake) ceiling
1
How should I fasten a new steel bathroom wall to the ceiling between joists?