I have a walkout staircase. The top wall of the walkout had to be cut down to use as a tread. Cutting down the top wall exposed 6 ends of #5 rebar. What should I do? 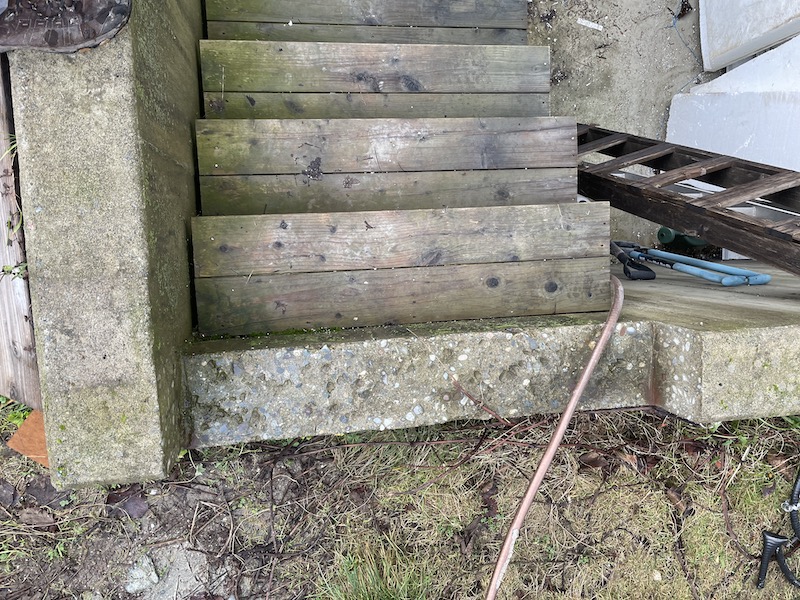 Seems like the biggest problem here is lack of a railing -- 14 feet is a long way to fall!

I'd do nothing to treat the cut. There will be water exposure from rain or irrigation but at least there's not likely to be any road salt that would accelerate corrosion. Further, if corrosion does get into the wall, the stakes are relatively low. This isn't a bridge that would collapse suddenly; instead there would be years of warning signs as bits of concrete would pop away from the rebar. The wall would be unlikely to fail without a giving lots of warning signs first.

Keep in mind that any coating you do put on this wall-turned-tread is going to take a lot of wear, especially on the nose/corner. Virtually any coating you apply is going to wear through there first. You might have to coat the concrete and then put some replaceable tread element on top -- but this will easily cause havoc by making this one riser too tall compared to the others in the staircase. (As you may know, US building codes require that "The greatest riser height within any flight of stairs shall not exceed the smallest by more than 3/8 inch.")

There do exist coatings you could put over the concrete and which would wear respectably well but those I'm thinking of aren't sold in home centers and are sold in 5 gallon or larger quantities. That's much, much more than you'd need for those couple square feet. The one I'm thinking of is Vulkem 350, which is a two-part polyurethane coating applied to a thickness about 1/8". It is tough stuff; I've seen it wear for a decade or more on a single-family residential deck application.

It could look pretty good if you used Vulkem or something like it not only for the cut concrete but for the wood treads too. It would make the treads all match, rather than having the top-of-wall stick out as being different. Sand, crushed walnut shell, or other material mixed into the top coat would give nice slip resistance when the treads are wet, too.

Coat it with a concrete epoxy paint (and grit, for traction, since it's a step.)

Not the answer you're looking for? Browse other questions tagged concrete rebar exposed-rebar or ask your own question.

0
How big a hole do I have to drill in concrete to embed rebar in it?
1
Maximum height of hand-shaped concrete curb?
0
How to drill to insert rebar into a large rock (5mx5mx5m)
2
How to suspend rebar cages for piers
0
Do I need rebar and footing for a 1'4" tall 4" thick concrete wall?
2
Cut rebar in concrete
0
How far into a footing pier should rebar extend from the rock below?
0
Gravel inside concrete form or form on top of gravel?
1
Angle grinder blade(s) for cutting rebar