I'm preparing to install luxury vinyl plank in the living area of the second floor condo I just bought (carpet was installed previously). It's a woodframe condo with a wooden subfloor built in 1985, and there are several places where there are drops and dips in the subfloor. I'm trying to figure out what level of "level" I need to bring the subfloor to and what's the best way to do it. I'm hoping to DIY but understand I may need to hire a professional if it's bad enough.

I'm attaching a photo with a map of the problem areas. The worst is near the entrance to the room where there's a drop of roughly 1" over 4 feet, which from my understanding is quite substantial. The second biggest issue is a local low spot in the middle of the room.

I have had both Henry 549 "feather finish" recommended for filling in the low spots, or self leveling underlayment. Also gotten some recommendations for 1/4 plywood all around to even things out. The low spot in the middle of the room seems like a very straightforward fix with the Henry's 549, but I'm wondering if that 1" drop is over my head.

So far I've had 3 contractors take a look, and every one said that this is the nature of the beast with wood-frame construction and that they wouldn't recommend doing too much since the building will continue to shift over time. They all said everything seemed to be structurally sound (I even took one to the unit below and confirmed that the ceiling looks normal there), so I should only repair to the extent necessary for the LVP install.

I'm wondering if it would it make sense to fill in the local low spot (and other more minor low spots) with Henry's 549 patch, and then add some 1/4" plywood everywhere except for the area marked high, up until say a couple feet out from the drop, then ramp up to the high area using the 549, so that the incline is less extreme? Or if anyone has other suggestions for how to approach this they would be quite welcome! One of the contractors also mentioned using the underlayment that you roll out, but the installation instructions for my LVP mentioned only "APA rated" underlayment which I think is just the plywood. 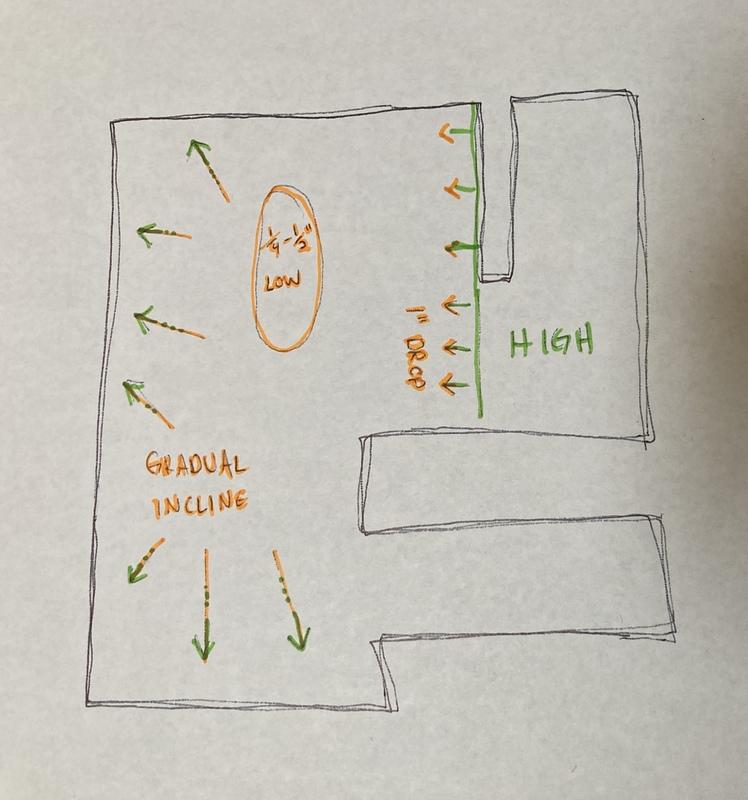 Professional flooring installers would flood from the high point to the low point with self level. They typically charge per bag and I've seen this kind of job cost 15k when done for more than one level of a house. You can do as you suggest a hybrid approach. Installers won't typically go that route because it is a lot more labor and requires a lot more expertise and judgement calls. They want a fool proof and easy way to get the floor flat and there is more room to go wrong when making judgement calls.

Note you are going for flat not level. Typically your finished floor material will say 1/8" over 10' or something like that. To see how bad your floor is you take a 10' straight edge and move it around the room, then I sometimes use horseshoe shims (these come in 1/16 - 1" thick) and see which size will fit under any gaps that are visible under the straight edge.

Some things to keep in mind. You can go outside the 1/8" over 10' if you can tolerate being able to detect bounce in your floor - I am assuming you are going for floating install. It is worth also thinking about what section of the floors are being used for. You'll notice out of flat more if this is a walking area than if this is under furniture.

I've done the hybrid method before. If you put plywood down first to build up the 1" and then try to use SLC to feather out to the plywood you end up having a join between the edge of the plywood and the SLC and this edge is likely to crack. If you just pour the SLC then there is no sharp edge transition. You can mitigate the transition with different techniques. This is why SLC is typically the one stop solution.

If you are doing the work yourself at $20-30 a bag you probably aren't much ahead using the plywood - labor is probably worse for the plywood with the cutting screwing and gluing but if you aren't investing in the SLC tools (spiked roller, squeegee, trowels, spike shoes, etc) then might be easier if you already have the carpentry tools.

If you are going the plywood layer method then filling in the large dip with SLC first makes a lot of sense. The issue you run into is how do you adhere the plywood over the SLC. I've screwed through it before and it can crack. If it cracks and the pieces are able to move around then you can end up with noise when you walk on it. Probably the best approach is to use construction adhesive on that section but you'll need to put a substantial weight on the plywood to ensure it pushed out any air. Construction adhesive also can tend to be thick so it can end up pushing the plywood out of level especially if you aren't screwing it down (this is harder the thicker the plywood is. You could trowel the adhesive onto the plywood much the way tiles are trowels do the ridges collapse and the air is able to escape. Probably better to go with a glue used for glue down installs and use that to bond the plywood to the SLC over the area. Hopefully the dip isn't huge - hard to tell how large the area of the dip is.

I'd expect any settlement to be finished. If your joists are undersized and you have crazy amounts of movement in the floor it is possible the SLC would delaminate from the plywood overtime. If you are installing with an underlay then I wouldn't expect a problem if it cracks but the floor is flat then any cracked piece won't have anywhere to move. The underlay would further suppress noise of it between the finished floor and either the intact SLC or the subfloor. Professional floor installers use SLC on super high end homes, if there were a tendency for it to breakdown overtime they wouldn't use it or there would be crazy amounts of lawsuits. The henry 549 has a max lift of 1/2" so you'll need two lifts. The other thing to watch is that this product doesn't require a primer and the plywood is going to suck the moisture out of it. Sika and Mapei require primers (on plywood it is a latex primer) which prevent moisture from being sucked out of the mix. I'd go for cold water for extra work time and you probably want to prewet your plywood. Both mapei and sika have SLCs that can be feathered.

5
How do I know if my subfloor is fire retardant or preservative-treated?
1
Plane floor joists, sand subfloor, or sand underlayment to handle hump in floor for cork plank flooring?
1
Hardwood Floor Squeaks - Fixing Squeaks or Removal of Hardwood Floor for LVP
0
Questions about subfloor prepping for LVP
0
Installing 3/4" plywood underlayment over 1/2" subfloor
0
The limit on subfloor height difference