Tv will be off center if mounting to studs

I’m trying to mount my Samsung Frame above our fireplace. The placement of the studs makes it so the tv would be about 1 1/4 inch off center if I hang it with the included mount anchored into a stud on each end. If I went directly centered no studs would line up with any of the mounting holes. The tv is 55 lbs.

I’ve thought through some of these alternatives:

The Frame comes with a very specific no-gap mount that makes the tv tight to the wall and look like a painting. We’d like to use the no-gap mount, so that rules out 3rd party mounts. The included mount doesn’t allow for any lateral movement. It does have various mounting holes, but unfortunately but their placement doesn’t span long enough to allow for any studs to be hit while centered. Also wanting to keep the tv tight to the wall rules out mounting plywood across multiple studs and attaching the mount to that.

Update: I was browsing a store and happened to find that a third party makes the exact same no-gap mount. I was hesitant to drill holes in the OEM mount since that'd void the warranty. No qualms drilling the aftermarket mount.

This first picture is the mount lined up with the center of the studs(yellow lines) using the existing holes. You can see the center line is off center. 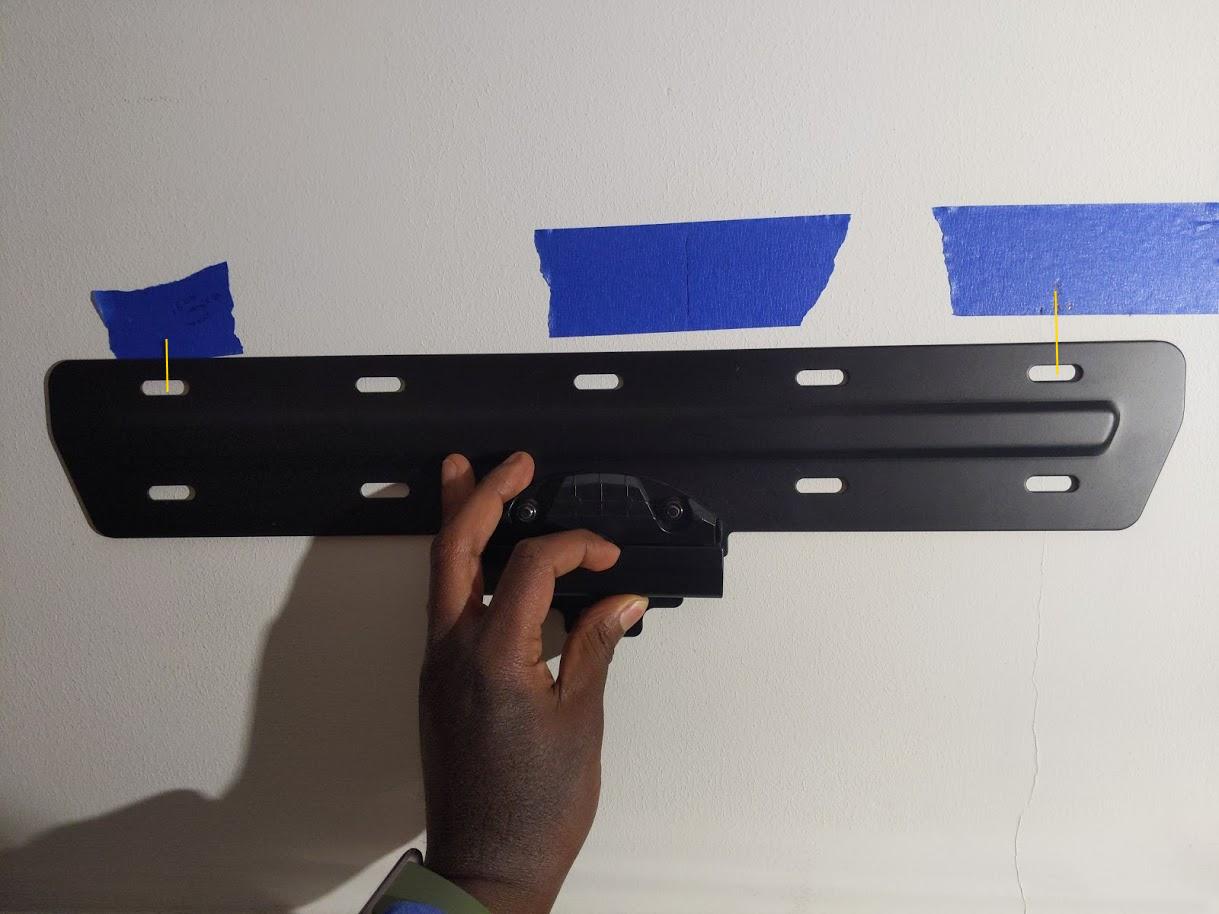 This next picture is the mount and where the center of the studs(green lines) line up. 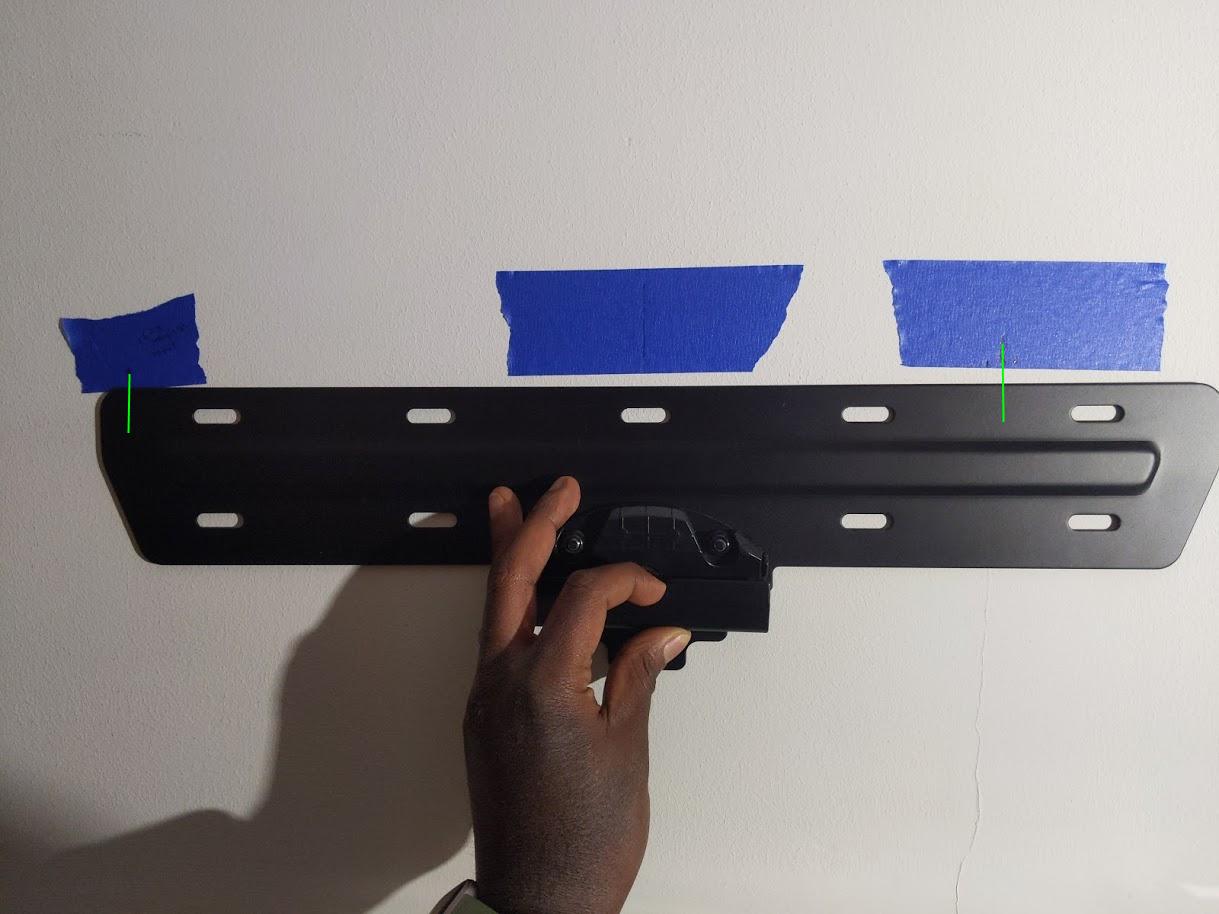 If I drill a new hole on the top left side there'll be .56 inches of margin on the left side of the hole. I think that should be ok since the existing holes are only .4 inches from the top. Also since there's a taper, I'll need to move the bottom left hole in a bit and maybe hit slightly off center on the stud. Does that all sound alright?

If I'm trying to follow the manufacturers instructions I should add two sheetrock anchors in addition to the 4 stud holes. If I use anchors in the two center holes(my thumb is covering one) is there enough width between everything? I think it should be alright?

Thanks for your input!!

drill holes in the frame where the studs are. No way would I put a $1000 TV on toggle bolts.

Any TV mount instructions I've read specify that you MUST drive the supplied lag bolts into a stud X number of inches. If you do not do this then you cannot hold the manufacturer liable for any injury that your setup might cause.

With that said I would cut out a section of sheetrock from stud to stud which is larger than the TV mount by at least 8 inches vertically and mount a piece of plywood that is as thick as the sheetrock to the existing exposed studs. Behind the plywood I would screw on short studs in the exact location that you require lag bolts for the TV mount.

Finally, mount the TV mount to the faux studs and give it a good slap as you say "that's not going anywhere."

If your wall is relatively thick (3/4 inch) and you want to sink your mount to make the TV even more tight to the wall then I would go no thinner than 1/2 inch plywood.

With a TV that big I doubt anyone (except you) would notice 1.25", even with just over 6 total exposed inches on the sides.

When I mounted our 70" Vizio where I wanted it was nowhere near the studs if the entire setup (mount and TV) was completely centered, but I found this mount below which was able to shift left or right I think 9 full inches. So I was able to get 4 total lag bolts in 2 different studs and it turned out great. Doesn't totally hug the wall but it's close enough for me.

6
How can I hit studs and avoid cables when installing a TV mount?

1
Why does a wall in my finished basement only have a steel plate and no studs?
13
Can metal studs support a 64" plasma TV on a swiveling mount?
6
How can I center a TV on a wall with a centered stud?
2
TV mount is 16.5" wide but stud centers are 17" apart. Is it still safe to mount?
2
How can I mount a TV with widely-spaced studs and weak wallboard?
0
Mounting a TV to Concrete Through Wood Paneling and Air Gap
10
Can studs be 2-4 inches apart?