Suggestions for building plywood landing and connecting to concrete stoop? 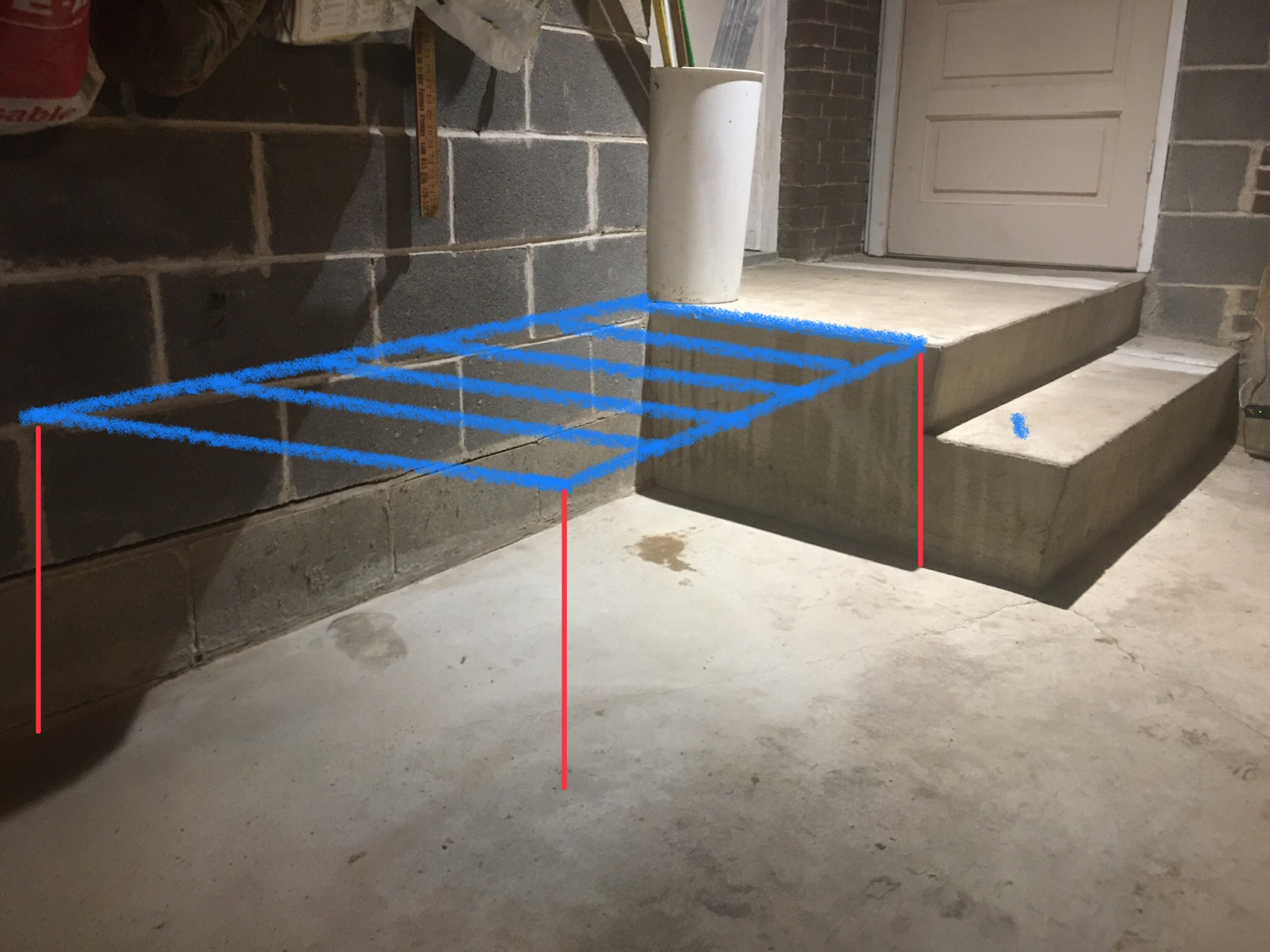 I would like to add a plywood landing to the garage and kitchen door entryway from the concrete stoop. The Cinder block garage, which was built later and abuts the house, has a horizontal crack that runs below where I want to attach a 2”x4” ledger with concrete screws. The plywood landing, which would connect to the sloped stoop, would be about 29” x 8’ with some sort of railing.

Is it necessary to chip out and re-point the cinder block bed joints with mortar? It is getting pretty cold for mortar to set here in Northern Illinois. I can try to notch the legs that support the ledger but the floor is pretty uneven too.

I was planning on attaching a ledger to the wall and stoop in a L shape fashion. Since the stoop has a slope should I just add a transition piece or should I build it sloped to match?

Also, the stair rise is high, the first stair is 10 1/2” and the second one to the top of the landing is 7 1/4”. Should I just add a wood step to the bottom floor and secure it somehow?

This is for an 84 year old elderly family member who has a hard time with the steps. Any tips you may have on construction and design are appreciated. 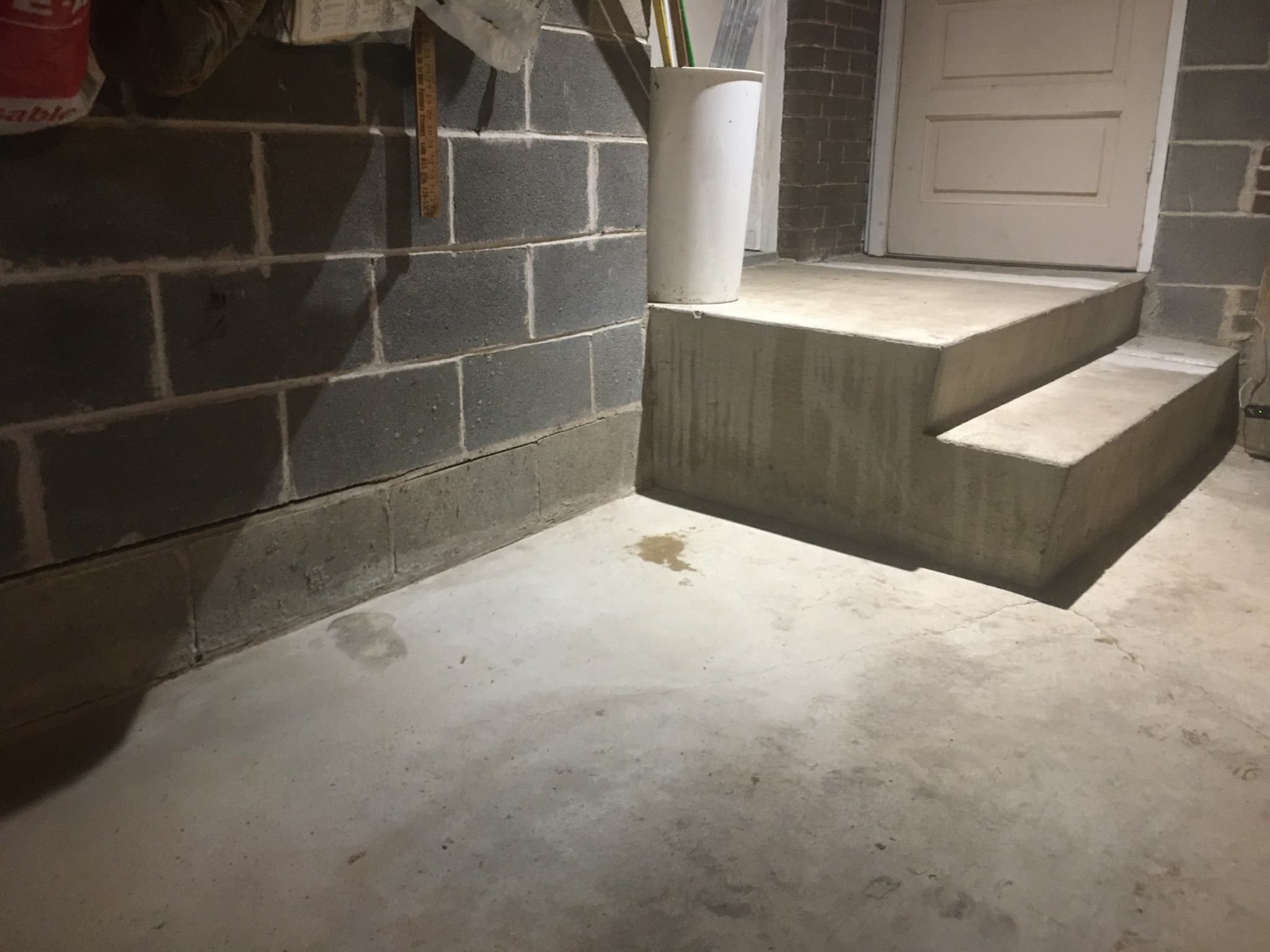 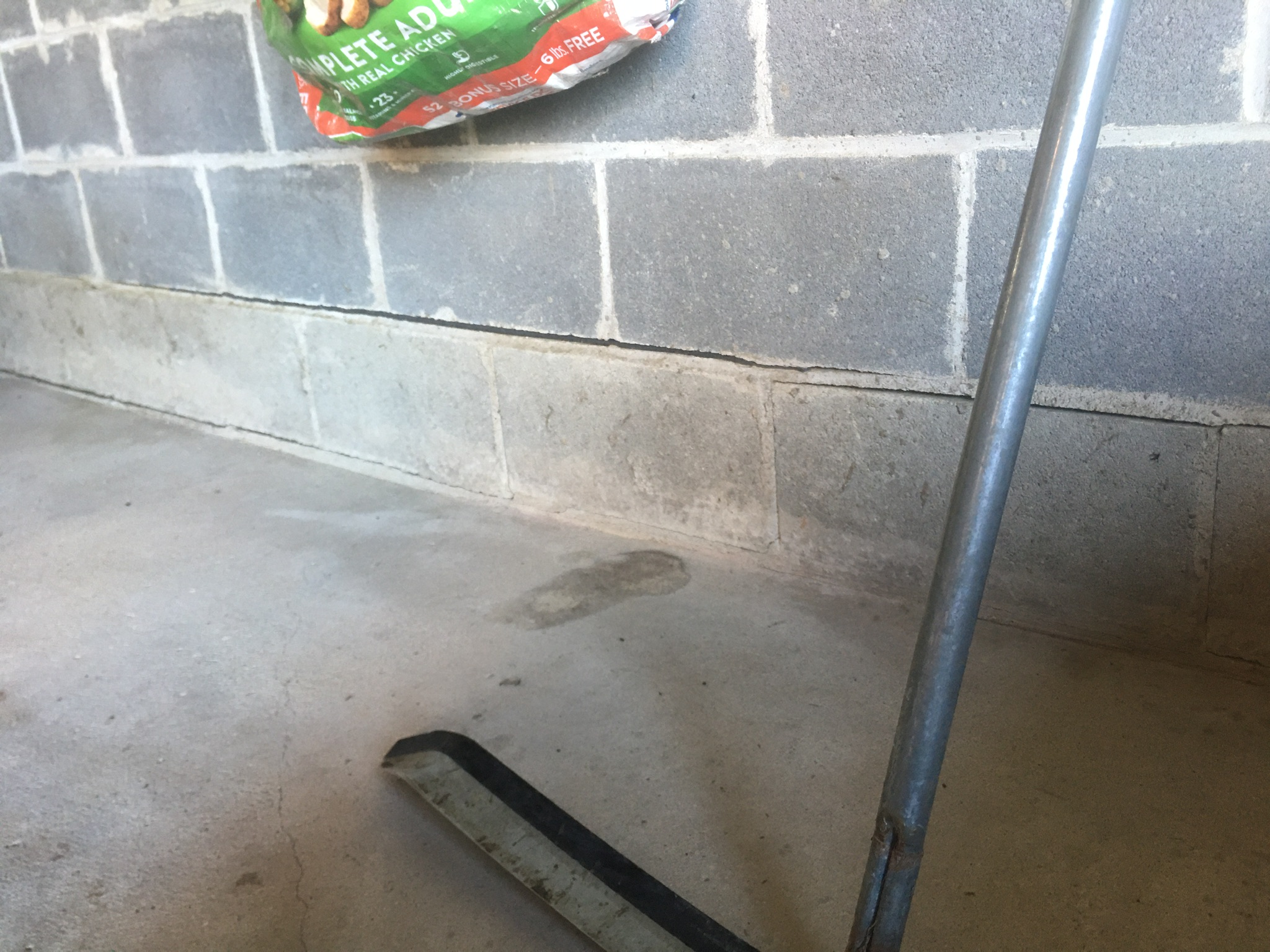 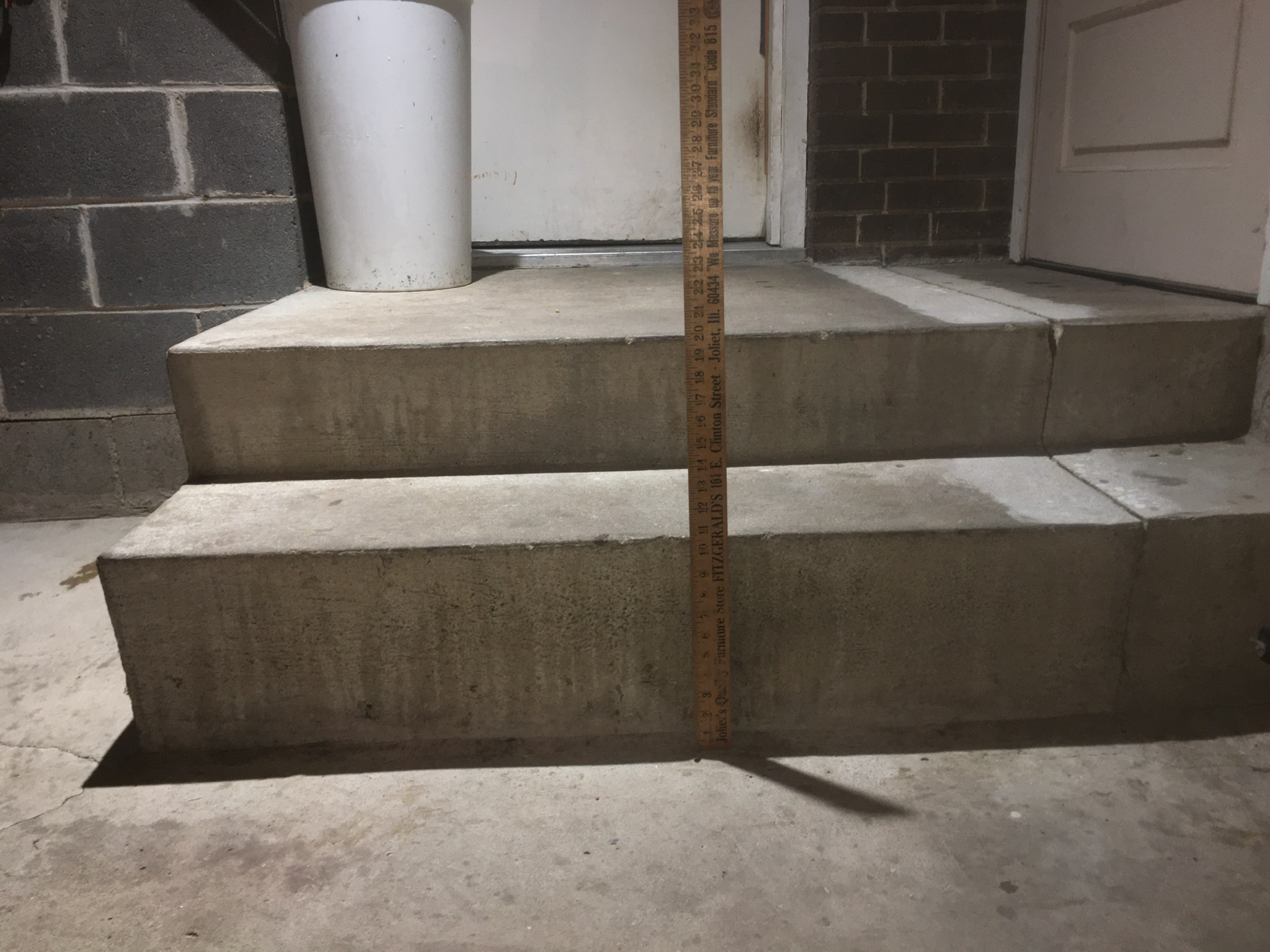 I would build it more or less exactly as you've sketched it, but on posts like a deck. Don't attempt to suspend it on the block wall. Build a conventional floor system with 2x6 sides and joists on 16" centers, then cover it with 3/4" plywood.

Drop six legs to the slab fastened to and supporting the rim joists. I'd probably use one 2x4 under the rim and one against it and lapping onto the joist, inside. Be aware that these will vary in height to accommodate slope in the slab.

You can then fasten it to the block to hold position, but you're not relying on that connection for load bearing. You could also just put a dab of construction adhesive under each post to lock it in place.

As to the slope in the concrete stoop, I'd consider twisting the deck to go from sloped at the concrete to level at the other end. It really depends on what the user prefers, though. The alternative is to set the deck level with the low point on the stoop and create a small transition wedge to blend with the concrete.

A good railing strategy is just to use 2x2 spindles on 5-1/4" centers with a 2x4 top rail (oriented vertically). Optionally cap that with another 2x4 or 2x6 to create more of an elbow rest. Fasten each spindle to the rim joist with two 2-1/2" screws.

The stoop step is a conundrum. Your idea to build a wooden bottom step has merit, but stair sets with random rise heights are a problem. I'd consider building a full 3x3 landing 7-1/4" down from the lower tread, leaving you with two uniform rises above the landing. Mentally this is less likely to result in stumbles.

If it was me I would go sideways with a ramp and a banister/handle or build a ramp over the stairs and I would demand he use a walker in the house. If he can't negotiate those steps he should be using a walker around the house and you need a ramp for that. I would then attach it to the concrete floor and steps with a few lines of construction adhesive/liquid nails. I would NOT attempt to modify the concrete in any way. You want to be able to demolish it when it's no longer needed.

Really push him to use a walker around the house. All it takes is a fall and break a hip or something and he will never be able to be out of a nursing home again. It is really important at that age. And I think you need to get the house evaluated anyway since this is sure to not be the only dangerous place in the house for someone that old who can't negotiate those stairs.

Not the answer you're looking for? Browse other questions tagged garage deck carpentry masonry railing or ask your own question.

9
What's the best strategy to reduce moisture in this garage?
4
Should I be concerned with the accumulation of road cinder in my garage?
4
How to reinstall iron stair railing in concrete that rusted out at the base?
1
How should I attach a pergola to my rooftop deck?
2
Should concrete stair landing be anchored to building?
1
Adding a layer of concrete and tiles in the garage
0
How to dust proof and waterproof garage concrete screed?