My father manually screwed in two self-tapping screws into drywall that most likely contains asbestos in the compound. It was in a garage in a house built in 1976. It was actually those hooks that you screw into the wall to hang stuff off of.

He did not use any power drill. Is the risk of asbestos exposure low?

I understand the drywall usually doesn't contain asbestos but the compound usually did. No idea where he screwed it in.

Extremely limited exposure to asbestos like your father may have had will not result in any health problems.

Hopefully this answer will not get flagged for being opinion based because if you look at the facts, nearly everyone who got asbestosis was in an industrial or military setting. Your father is at virtually no risk from what he did.

Asbestos exposure is not like cynanide where it can cause immediate death. Most asbestos-related illness is with people who worked with the material over a long period of time.

Is there danger from such an exposure? Yes, but it's remote. Once inhaled there is nothing you can do about it. The best approach is to get your home tested and if it's found to have asbestos, have it professionally remediated.

Also keep in mind that illness from asbestos typically takes years to develop. Often 20-30 years or more. So depending on your father's age, other age-related illnesses are more likely to affect him than momentary asbestos exposure. 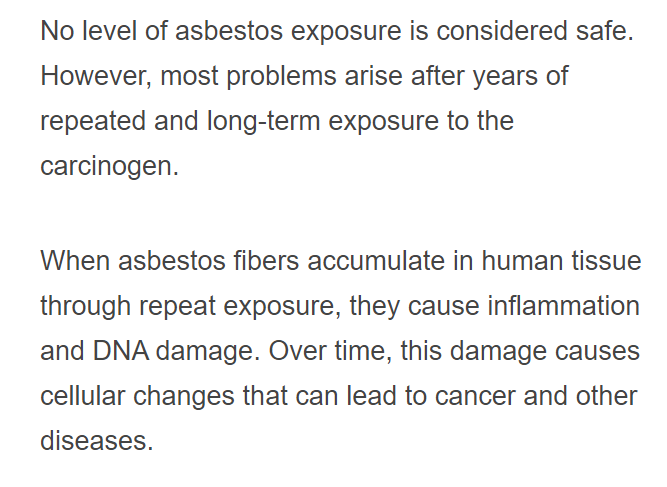 What is the real threat?

Asbestos comes in several forms. The one we're concerned with is a puffy/wooly fine-fiber version similar to today's fiberglass matt or rockwool; it's job is to prevent air circulation so the air can be used as an insulator. The air insulates, not the puffy mat material.

Asbestos is also made in "hard" form as a pressed/formed/molded panel. This is of little concern as long as loose fibers are not being created. This is often seen on the sides of houses.

Really, asbestos was the "fiberglass" of that time; since it occurred naturally in fiber form, it didn't need to be manufactured.

Decades ago, doctors started noticing a pattern of a certain cancer among older workers in certain industrial crafts: working in asbestos manufacturing plants, fitting pipe (or to be more precise, pipe insulation), ship wrecking (lots of insulated pipes on a ship), boilermakers (ditto) etc. These people worked with asbestos every day, as their day job, for decades of their life.

I'm not an oncologist, but I'll tell you how the mechanism starts: it starts with fine mineral fibers causing inflammation. Inflammation is the body's normal way of rejecting threats, and it's quite good at healing that. However when a body is subject to constant, daily inflammation for an extended period, constantly healing and rebuilding, the immune system is under a great deal of strain. So it has trouble doing its job at peak performance.

The takeaway from this is that any mineral fiber is going to have a similar effect - asbestos, rockwool, fiberglass, etc. What made asbestos so toxic was the cavalier attitude toward PPE that people had in the early-mid 20th century, which allowed doctors to notice patterns of illness. That won't happen with rockwool or fiberglass because they are newer products, and large companies won't let people work without PPE, so the illnesses won't happen there. Patterns with independent contractors are much harder to see.

I say this to point out that fiberglass and rockwool are not "magically safer" than asbestos -- but conversely, and to your point, asbestos is not significantly more dangerous than rockwool or fiberglass. Again, a casual "drive by" encounter is simply not going to have a health issue. There probably weren't any airborne microfibers, and even if there were, the inflammation occurred once, your immune system dealt with it once, and your body went back to normal. There was not the repeated, daily, constant inflammation and daily stress on the immune system that asbestos workers faced.

Why there is such mad hysteria about asbestos?

Many of the companies that made asbestos things, set up trust funds to support people who got cancer from asbestos.

The word for that, mesothelioma, is the most expensive advertising keyword in the world.

Why? Because these trust funds are extremely well-funded, and "ripe for the picking". Unfortunately, this is not a single government program you can fill out a few forms and collect. Each fund only wants to pay for liability caused by its origin company, and if someone worked with a variety of companies' products, well, it gets complicated. As such, the lawyers are involved. But it's easy pickings for lawyers, since the only matter of dispute is each fund's percentage of liability.

Contingency-fee lawyers take 1/3 of a settlement, typically. You can see where this is a gold mine for them! It's crazy money for work that is "shooting fish in a barrel".

Thus, lawyers have run one of the most aggressive advertising campaigns in history, to make sure "no stone is unturned". That's why "mesothelioma" is the most bidded word on the Internet.

Obviously, average folks are highly influenced by advertising. I bet you think WD-40 is a pretty good product :) And so this barrage of "Asbestos is the worst thing ever! If you ever worked with asbestos, CALL US!" advertisements, has led the public to believe asbestos is plutonium or something.

The danger from asbestos is the fibers floating around in the air. You are talking about a garage. Garages typically are not sealed up so they have a lot of air exchanges per day.

The real issue is indoor air quality. One of my customers is a medical doctor and one of the surest ways to get him ranting and raving is to mention this. He sees many patients who have been through the wringer with unknown problems and sicknesses and such and have not been helped by others. Many times diet changes fix things but air quality is one of the things he asks about.

The problem is for years people built homes with lead, radon, asbestos and all kinds of other nasty stuff but because nobody bothered caulking anything up homes were drafty and had a high number of air exchanges with the outside. So a paint particle containing lead or an asbestos fiber or radon gas or whatever else would end up outside. Then after the oil embargo in the 70's the EPA and government started banging the drum for insulating and sealing cracks and so on and people started sealing up air leaks. That is when indoor air quality started plunging and people where subjected to not just the big 3 but also outgassing from vinyl and plastics and TV sets and other electronic gear. And they started getting sick from it.

Not the answer you're looking for? Browse other questions tagged drywall asbestos or ask your own question.

0
Exposure to asbestos, what to do with stuff and worries?