Install a ceiling light - confused on the ceiling wires color

Thanks for any suggestions. The electrician quoted me $150 for this installation and I don't want to pay him to do the job. I can do it (with the help from this community!) 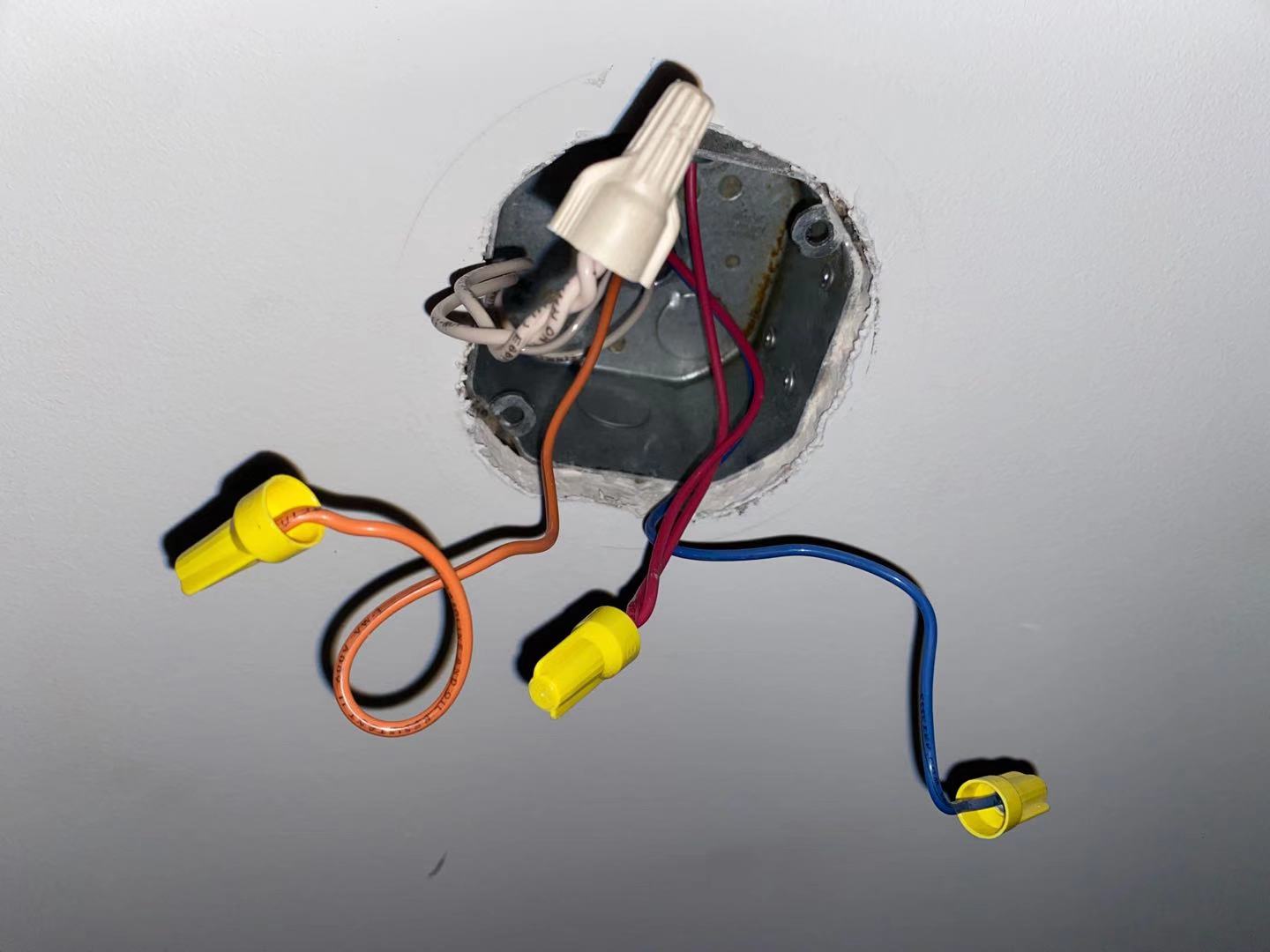 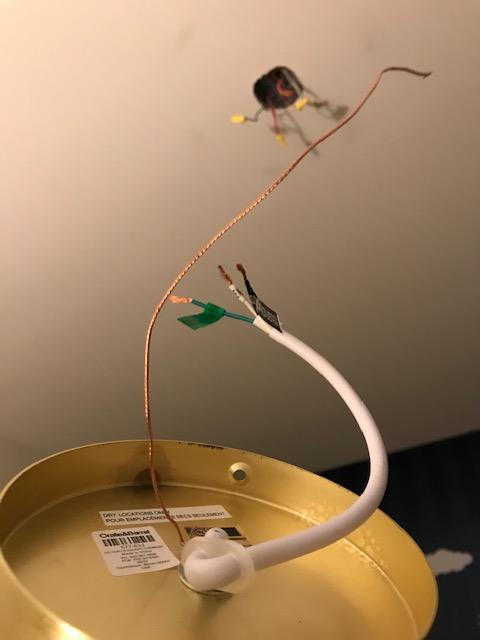 The wall switch is a dimmable type. (Previous owner's light is dimmable before I moved in). I am not sure if this has anything to do with first attempt & third attempt that require a seperate wire in order to have the switch working. I tried to unscrew the wall switch but couldn't go further as it looks like mounted to the wall can't be removed.

Summary: As per the user @Harper-ReinstateMonica suggested, the orange wire should be the hot one to use. But there looks like compatibility issues with the dimmer switch, I used a GE LED A19 (6W), relatively small one (energetic daylight) and the bulb box says dimmable >.<, I will try a different bulb. 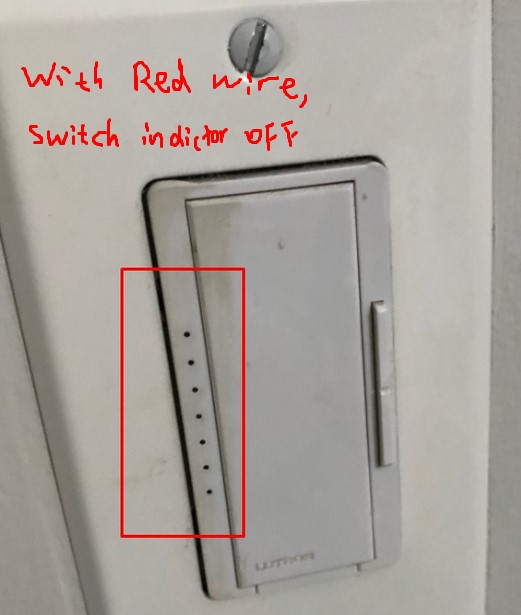 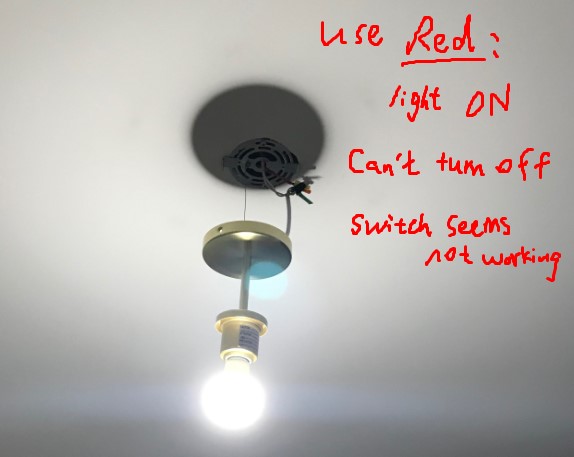 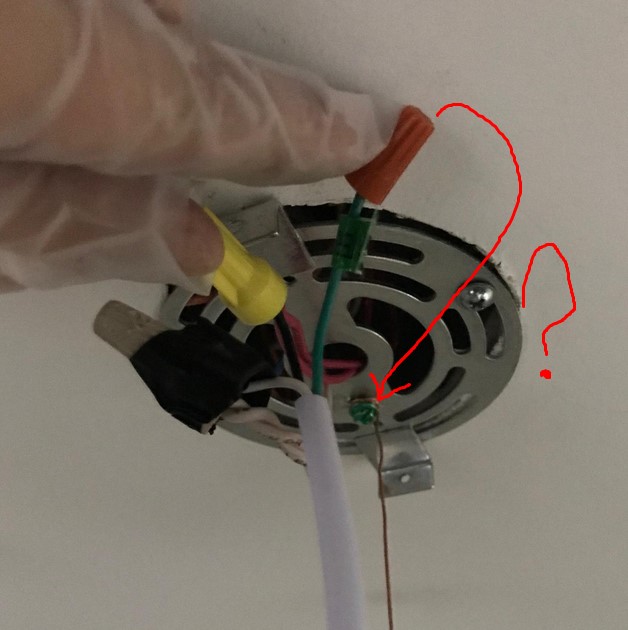 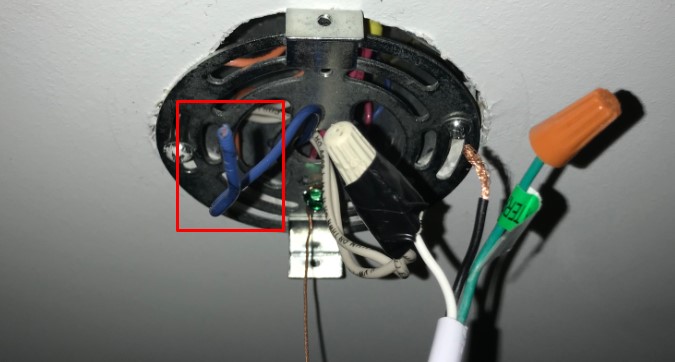 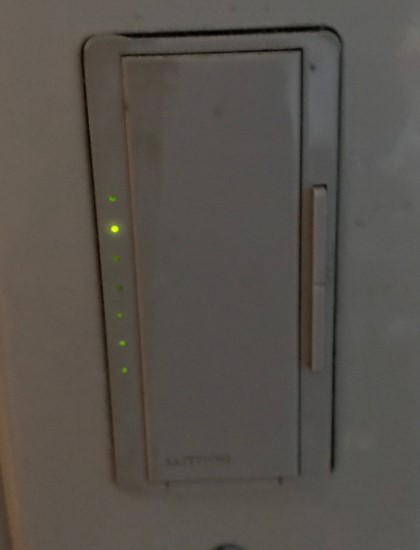 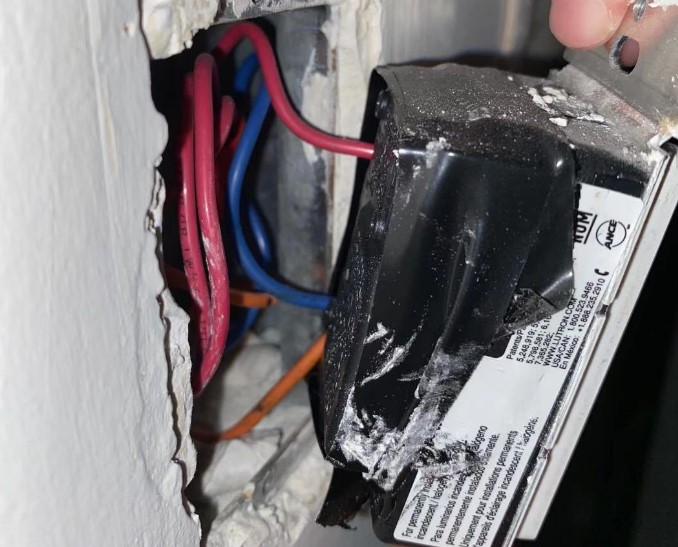 I finally manage to open the dimmer switch, turns out all three wires (red, orange, blue) are connected to the switch. So, the question comes, should I try the blue one? I have to strip it (it's weird if previous owner used the blue wire and cut the top portion when they removed the light).

What you have there is metal conduit. You can tell because it's modern construction but no ground wires. The metal pipe is the conduit.

It's common with conduit for other, unrelated wires to "pass through" your box. There's nothing you can do about that except understand not every wire up there is related to your project.

The problem is, in North American wiring, color codes are a bizarre mess - however in conduit work, the color codes clean up a little bit.

But we have 1 of the 2 wires that we need: Neutral. In conduit, white is definitely neutral, so you know you add the lamp's white wire to the existing bundle of whites.

The other wire is a mystery. I suspect the red wires are simply passing through, and have nothing to do with this lamp. Let's disregard those.

That leaves orange and blue... either of which could be your active lamp "switched-hot". Honestly, given that we're hooking up a lamp like this and we know neutral, you can't do too much damage just trying one. That's what I'd do.

Have the circuit breaker switched off anytime you are modifying wires - don't do this "hot".

What to do with those ground wires

The deal with 2 ground wires is they go to different parts of the lamp. They both need grounding, but one should go to the metal chassis of the lamp, yes? Which can get grounding via the mounting screws.

(by the way, switches can also do this, but receptacles can't unless they are labeled "self-grounding" or certain other conditions are met.)

So if one of the ground wires goes to the metal lamp chassis, attach the 2 grounds to each other and you're done.

"But I'd like to wire it up out of an abundance of caution"... let's pause to be clear about this. You can make redundant routes with safety ground, all you like. Please do. But DON'T do it with neutrals! Neutral is not ground, and it follows different rules.

Anyway, if you have a plastic/wood lamp body, or you want redundancy, yes - you can attach it to the metal box. There will be a hole tapped #10-32 in the back of the metal box. Possibly with a screw already in it, possibly a green screw. You can put 1 wire on that screw.

"But I have 2 wires" -> pigtail. Or use a ground clip or drill/tap a second ground screw. Ground screws must have thread pitch -32 or finer. (32 threads per inch or finer, or 0.8mm or finer).

Update based on your 12/9 info

Do not connect multiple hot wires together unless you like fire. What we've had you do so far is testing based on educated guesses. That is not the same as "blindly trying random stuff", that would be very wrong-headed. Never blind experiment with electrical. Some things go boom, and lots of things will create a situation where the device apparently works, and then kills you.

As expected, the red wires are "just passing through" and are providing always-hot to some other location. Tapping these is pointless unless you want the light burning 24x7.

It's clear the orange wire is the correct wire, since it makes the dimmer power up. The fact that the lamp won't light is a completely separate problem related to incompatibility between the light and the old dimmer. Not every LED works on every dimmer (most do not, actually).

The blue wire was clearly never used. Don't mess with it.

4th attempt: Similar to 1st attempt (using orange wire as hot), this time used a GE LED BR30 10W bulb, when push the dimmer switch, the indicator is flashing green light, the bulb is lighting but very very dark. The switch CAN'T make it lighter, or I should say "not really controllable". (I thought the switch might be broken)

And this is no surprise. Dimming is not magic. It's complicated and very, very ugly because it's chained to a throwback technology from the 60s that was designed to make dimmers cheap. If you got into the gory details, you'd go "Wowza, no wonder it's so hard to get LEDs and dimmers to work with each other!"

They actually have to add extra features to LEDs to make them dimmable. Those features add a few bucks to the price of the LED, so if you shop on price, you won't get that feature by luck.

5th attempt: used a GE 52W incandescent bulb, everything worked out as expected! The dimmer wall switch is fine actually.

Congratulations, you've validated the dimmer as functional. It's been incompatible with (most) LEDs all along.

"But I want LED up there!" -> I agree. However you'll have to carefully search the marketplace for an LED light and a switch/dimmer that are certified to be compatible with each other. Most dimmer manufacturers make lists of LEDs they've tested with, and better makes of LEDs which are designed for dimming often list dimmers they've been tested with.

Not the answer you're looking for? Browse other questions tagged wiring lighting ceiling or ask your own question.