Can I split a shared neutral between two GFCI breakers?

I have two 15A circuits that share a neutral. Currently, they go to two normal breakers, and I'd like to replace two those breakers (side-by-side in the breaker box) with plug-on neutral GFCI breakers.

I tried to install the GFCI breakers with the neutral attached to the neutral bus, but they stayed tripped. I was able to install one GFCI with the hot and neutral going into the load, and the remaining hot left unconnected. So, I'm wondering, should I split the neutral and attach it to each GFCI breaker's neutral load terminal?

I have breaker ties that I know I'm supposed to install.

You need a 15A 240V GFCI breaker (takes two spaces, one handle, two hots, one neutral) to pull that off.

A shared neutral is only feasible if the GFCI can look at both hots and the neutral to detect differences. Two separate 120V GFCIs cannot do that. One 240V unit can.

You have a MultiWire Branch Circuit - MWBC. That saves a wire, which is great.

You are installing GFCI. GFCI functions by monitoring for a difference between outgoing (so to speak) and incoming power. That is either between two hots (on a pure 240V circuit) or between hot & neutral (on a 120V circuit) or combining the two hots & the neutral (on a 120V/240V circuit, which is essentially what an MWBC gives you). In order to include the neutral in the equation, the neutral needs to be connected to the GFCI instead of simply to the neutral bar. In addition, since the neutral is shared, it needs to go to "both" GFCI. But that doesn't work, because each GFCI doesn't know which "part" of the neutral current belongs - and it can't because with an MWBC that neutral is not going to be exactly split.

The exact breaker will vary by manufacturer. But it will be something like this: 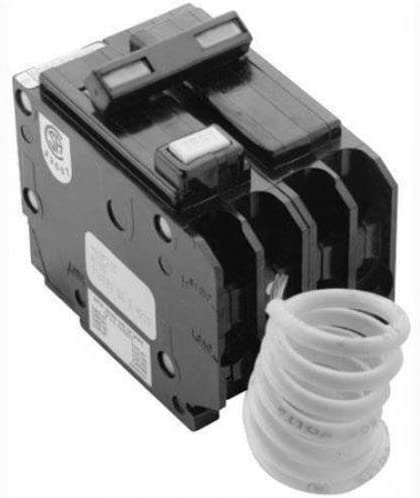 Sample image is from Amazon. Be careful where you buy your breakers (and similar items). If possible, buying "hands on, local" is preferred so you can make sure you get the right product (depends on your particular panel) and legitimate product (Amazon, depending on a number of factors, will sometimes substitute "equivalent" or used or other problem items, particularly if you don't know the details of how to order carefully.)

You don't need handle ties this way, because double breakers are, by definition, common shutoff.

While nuisance trips on GFCI devices should be minimal-to-none, your mileage may vary. But there is an additional real concern with an MWBC: Because the two breakers are treated as one (for both overcurrent and GFCI), a GFCI trip on one side of the MWBC will shutoff power to the entire MWBC. Toaster on one, coffee maker on the other. Spill coffee on the wrong parts and trip GFCI - the toaster will go off too! Not a big deal most of the time, but if one of the circuits has a clock then now you need to reset it, etc.

Not the answer you're looking for? Browse other questions tagged electrical-panel circuit-breaker gfci neutral or ask your own question.

3
Why is the coiled white wire on a GFCI circuit breaker smaller than the branch circuit neutral?
1
Shared neutral with two separate breakers
2
GFCI Circuit neutral sharing
3
Converting Tandem circuit with shared neutral to GFCI
2
My house breaker box have only breakers which seat only 1 wire. No seat for a load neutral. Can I still install a GFCI Breaker?
0
GFCI Circuit Breakers Wired Incorrectly
2
Two hots, one shared neutral, can it work with plug on neutral GFCI/AFCI breakers?
1
Wiring single circuit GFCI circuit breaker where a duplex GFCI breaker is shown in wiring diagram