My house was built in the 50s and I believe the baseboard radiators are original. We just bought the house and I went to go clean them. I realized most of them are rusty and painted over making them really hard to open and clean. My intention was going to be to replace them with one of those modern covers however mine open up in a way that I can't seem to find any reference to on the internet. Has anyone ever seen a baseboard radiator like this. How that I'm cutting them all open are there other options I can consider for upgrading. 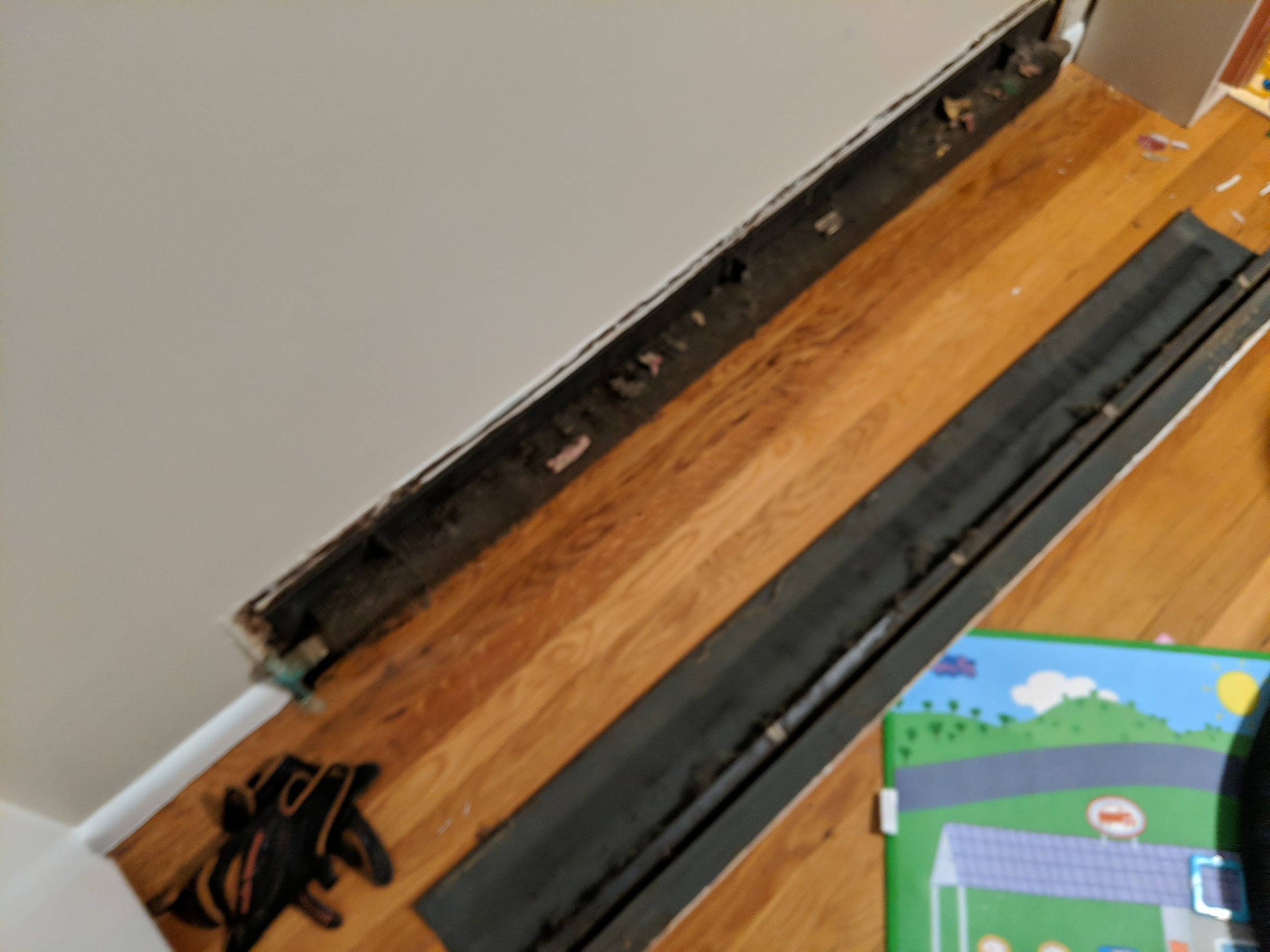 When I had it open the inside said Tuttle and Bailey.

As you can see when you open these up the whole thing comes off. There is a groove along the top that you slide it into and then it clamps into the clips screwed into the wall. The ones that I see can be modernized with a cover and usually still have the top attached near the slats while the front cover just comes off. Those also look a lot easier to clean.

Does anybody have any guidance on how I could replace these with more maintainable and aesthetically pleasing options.

Can't tell from looking at the picture you posted but it looks like a finned tube hot water baseboard unit. Do you heat your house with a hot water boiler and if not can you elaborate. If I am right and that is a hot water unit, the installer recessed the enclosure into the wall and mounted it directly onto the wall studs. I never liked that type of installation and would prefer the unit to be mounted on top of the finished wall.

Finned tube baseboard has aluminum fins, usually 4-5 per inch slid on a copper tube. Looking at the picture it looks like the fins could use a good cleaning with a shop vac and a very soft brush. The fins are very delicate and sharp so be careful. As far as the outer cover you could refinish as you wish. As far as replacing them, that would be a major project probably left to an HVAC company.

Baseboard heaters are typically pretty cheap for a unit.

This almost looks like a cast iron louvered vent assembly covering a forced air duct. You said "baseboard radiator" not "baseboard heater" which is it? Your picture is pretty bad, you should consider taking a closer up one.

If it's an actual electric baseboard heater than replace the entire thing as was said.

But if it's a "water/oil/whatever" fed heater, or the heater isn't simply mounted on the wall but dug into the wall, or something else strange, then BEWARE!!! There be dragons here!!! You won't EVER get a replacement that fits in the hole and matches or links up properly.

Now if it's a forced air cover then back "in the olden days" there were a plethora of different openings for vent covers I have seen many different shapes and sizes of them in recycle/rebuilding supply houses that serve old homes. I've seen vent covers that look like that. They also used to LOVE using square pipe for the laterals and such that connects to NOTHING modern. But you WON'T find a "modern/aesthetically pleasing" (whatever that means) replacement. And if those are cast iron vent covers then you better treat them like glass because if you ever crack one by accident you will be really up the creek. Those old 50's forced air vents often were wrapped with asbestos and attempting to jack around with them to force some modern 3x6 cover and ducting from the big box store on them can cause a whole lot of trouble.

Welcome to the joys of owning an old home. One thing you better learn right now is NEVER to discard or attempt to replace any part of the house until you have secured a replacement. You may also find yourself scanning Ebay for parts for the house.

Please elaborate on what you have in this house. And also check for aluminum wiring it was used for a time in the 50's.

Not the answer you're looking for? Browse other questions tagged heating baseboard radiator hydronic or ask your own question.

3
Steam Baseboard vs. Steam Radiator
2
Would upgrading hot water radiator heating result in much better efficiency?
1
What options exist for replacing or upgrading heater radiators?
1
cannot get last radiator on the line to heat up
0
How do I purge the air from a hot water furnace with zones
1
What type of radiator/baseboard is this?
0
Diagnose cold radiator
0
How impactful will it be to lose 7' of radiant heat pipe in a room?