We're building some shelves to fit in an alcove next to our fireplace, and so we built 4 frames using 1x2s for the front and back of the frame and 2x2s as the ladder support in the middle (each spaced about 12" apart from each other). Each shelf is 49.5" long and 21" deep. I drew a SketchUp model to better visualize it.

We've installed it on the wall by screwing the back and two sides into the wall studs (image of installation below). Our next step is to install 1/4" plywood to the top/bottom. 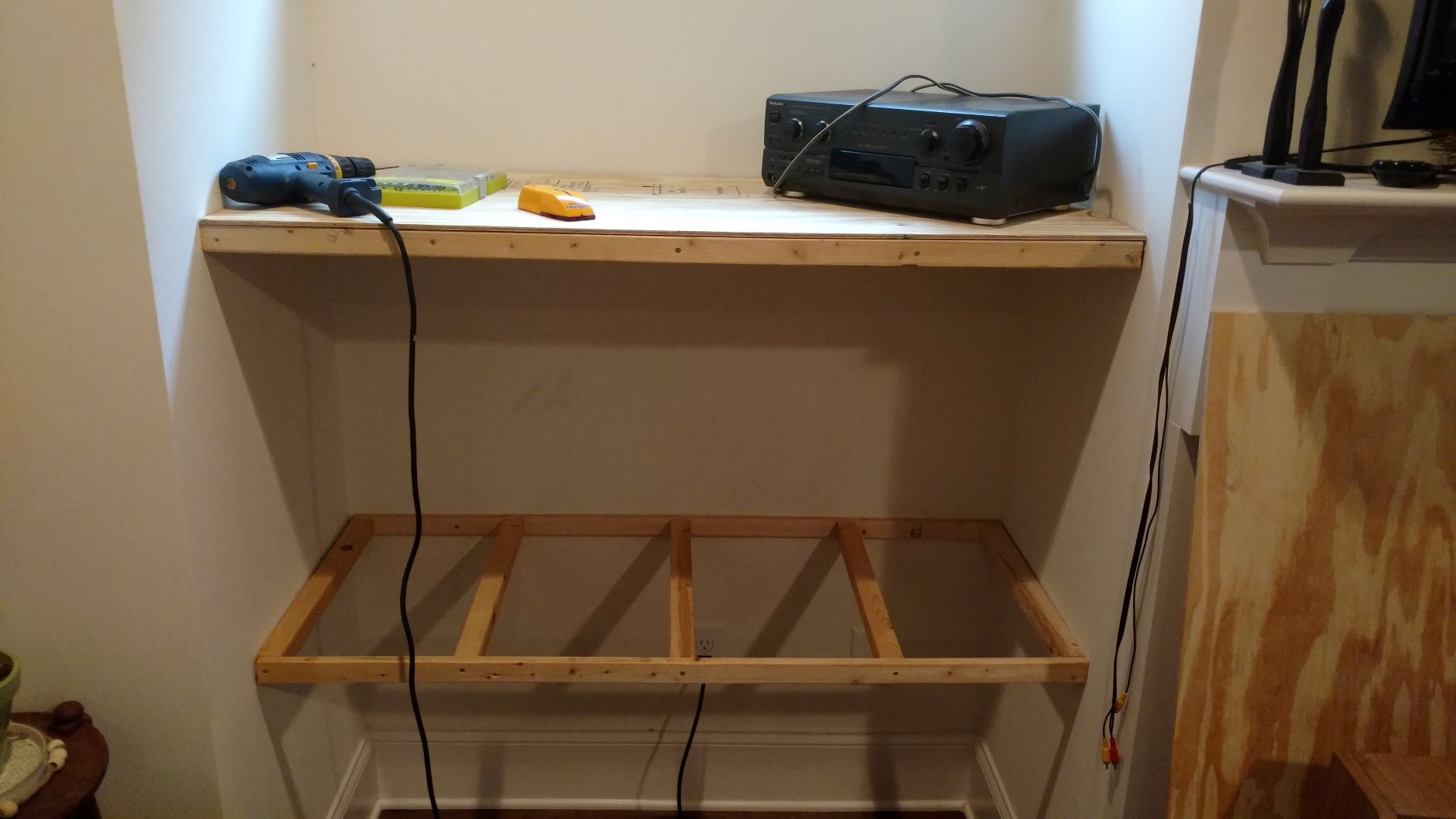 Our main worry at this point is with the sag in the middle. Because our shelf is so deep (21"), we're afraid that over time it will warp and sag. We've thought of a few ways to fix this, but we don't know which way is the best. We've thought of installing some sort of brackets on the inside and/or outside of the frame, or just installing a long 2x2 to the bottom of the shelf towards the front to help prevent sagging. We considered adding braces to the bottom, but we are trying to have the floating shelf aesthetic, and adding braces (metal or wood) would eliminate the "floating" aspect to it. Are there any suggestions as to what we can do to prevent sagging in the middle while keeping it as close to this look as possible?

Assuming that the sag would only be in the middle of the front edge of the shelf you will have to add something stronger than the along the front edge length. A 1x2 on edge (actual size 1.5" vertical and 0.75" thick just is not strong enough to prevent significant sag.

Since you will already have the raw edges of the 0.25" plywood showing along the front edge an added additional piece of wood would hide those edges and trim things up nicely.

For the stronger wood piece I would suggest adding a piece of hardwood like oak such that its upper edge is even with the top plywood. The bigger the vertical dimension that this piece of wood has the stronger it will be. Over a 49.5" length I would, based upon practical experience, suggest that the oak piece be 0.75" thick with a vertical height of about 3" actual. You would still not want to climb or sit on the shelves but they will sag way way less than your current 1x2.

If you have the plywood cladding installed so that it does not overhang the edge of the 1x2 you can use the yellow colored wood workers glue to secure the oak piece on place. A series of five or six clamps will permit clamping the piece in place. (Recommendation is to not install the lower plywood cladding till after the gluing is complete so that clamping the oak piece to the 1x2 is easy from the lower edge).

The design presented lends itself well to a 'stressed skin' design, or 'sandwich panel' (jum!). This design is common in aircraft construction.

You probably tested the shelves with the plywood loosely in place. When you do this, you load the plywood and frame in bending, which individually are quite weak.

However, things are very different if you properly attach plywood to the top and bottom of the frame. With properly, I mean that there may not be any sliding between the plywood and frame, so glued, screwed, dowel pinned and/or nailed along the entire perimeter and any internal bracing.

Now, when the shelves are loaded, the bottom plywood is loaded in tension and the top in compression. The resulting design will be very stiff in bending, and because of the closed box construction, it will even be relatively stiff in torsion, too.

Make sure both pieces of plywood is completely bonded to every point of the frame, the 1x2s and the 2x2s with wood glue and screws. The plywood will help prevent flexing which is what allows sagging. I don't believe 1/4 plywood will work on this one unless you don't put heavy stuff on the shelf.

Unfortunately a lot of people try to imitate metal furniture designs with wood. You won't get that "thin graceful floating aesthetic look" (the Rivendell Fairy Furniture look I like to call it) without using steel. JRR Token used metal in his Middle Earth designs which was sort of funny since his world had steel very rare for use in weapons. None of his battle towers and seige weapons (catapults, etc.) used steel but all the furniture the Elves used did. (since there is not a wood with the strength capable of those designs)

Your shelves will only be as strong as your weakest part, and right now that's your 1x2 front.

If you are really that concerned, double up your frame on the outside edge. Or add or replace with a clear (no knots) 2x4 instead of an additional 1x2. Even a clear 1x4 will be much stronger than a 1x2. Using clear boards are generally stronger than knotty. The tiny knots you currently have probably aren't a problem, but larger ones can seriously compromise structural integrity.

You can also cut a strip of the plywood to face the shelves. the current 1/4" isn't much, but if you glue it on, it'll add quite a bit of rigidity. Simply screwing it on will likely just break the plywood if there's enough weight to actually bend the shelf, since the weight will really only be applied to the plywood at the screws and so the plywood will move at a different rate than the shelf, essentially making it more rigid than the shelf. Getting a small sheet of 1/2" would be much better and you won't lose too much more space to the shelf. This would also be applied with glue and screws. You could clamp it and leave off the screws, leaving the front smooth. Good wood glue is stronger than wood.

As others have said, fully boxing the shelves will help, especially if you glue on the plywood, but even that only helps so much. What you need to consider is what you want your shelves to hold. Is it just a bunch of light Christmas ornaments, is it heavy home theater electronics, what about a mixture of heavy and light sporting gear, or is someone going to end up sitting on it?

I see what looks like an audio receiver sitting on a shelf at the moment, but I'm assuming there's going to be other uses of the shelves, too. I've had receivers that were light at maybe 10lbs and others that felt like they were 50lbs. Also, are there speakers going to be on the shelf? The size and type can cause different issues. Heavy ones can add more weight than the shelf is capable of handling. A subwoofer could cause the shelf or plywood to buzz annoyingly, or it could add vibrational stress that causes it to fail sooner. And a good subwoofer is normally pretty heavy.

There's a lot to think about when building a shelf like this. Even as simple as it seems, you are already seeing the complexity of what it take to figure out what you support with the shelf.

Believe me, I'm that idiot in a lot of things, since I just over-build everything. What the above phrase means is that it takes a lot of math, use consideration, experience, and more to figure out how to build something that meets specifications exactly, instead of being overly strong or even fail completely. And yes, adding a 2x4 to the front of your shelf is probably "over engineering" it, but it nearly guarantees your shelf will remain strong "through the ages" as well as for most things you want to put on it.

Not the answer you're looking for? Browse other questions tagged woodworking shelving or ask your own question.

3
What bracing is appropriate for this shelving?
1
How can I strengthen shelves?
5
How do I prevent doors on a media cabinet from sagging?
2
How to install wheels on shelves?
1
why does my workbench twist?
6
Did I make a major mistake on my garage shelves?
2
How to fix sagging cabinet shelves?
1
How can I support the bottom of a long, open cabinet?
0
Hidden/Floating Hardware for Solid Wood Alcove Shelves?
4
Built a shelf out of 2x4s but some braces do not meet, will they hold?