What are the proper materials and method to hang heavy-duty shelves in a garage for storage?

I am hoping this isn't too wide of a topic since garage storage can vary greatly from person to person depending on what's being stored. In my case, I will be storing power tools like my circular saw, reciprocating saw, heavy toolbox full of misc hand tools, boxes of screws, paint cans, cases of water, 50-lb bags of kitty litter, etc.

After much consideration, I decided against the wall-mounted 16x18 shelf brackets that I had already hung per Amanda's suggestion and went with free-standing shelves as recommended by alx9r. He provided a logical argument against supporting large amounts of weight on a residential wall frame and it honestly made sense. Plus, the cross bar on those brackets just takes away from your available storage space. I will say, though, that these Everbilt brackets were super sturdy when fastened with heavy duty #10 screws. I could jump up and down on those shelves and they'd stay put. Here's a pic of the shelves I installed using the brackets: 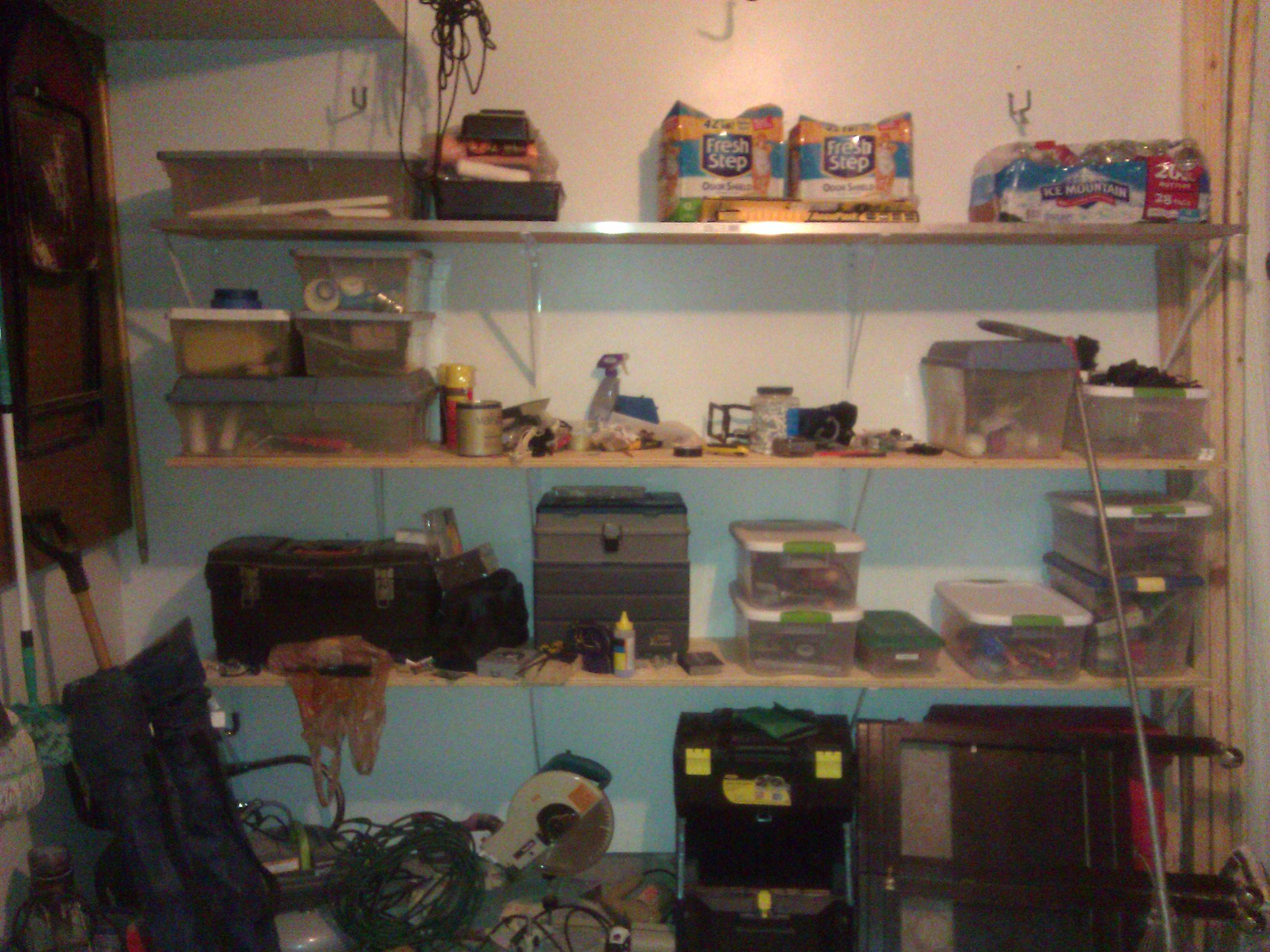 And here are the adjustable shelves by Sandusky that I bought from Sam's Club: 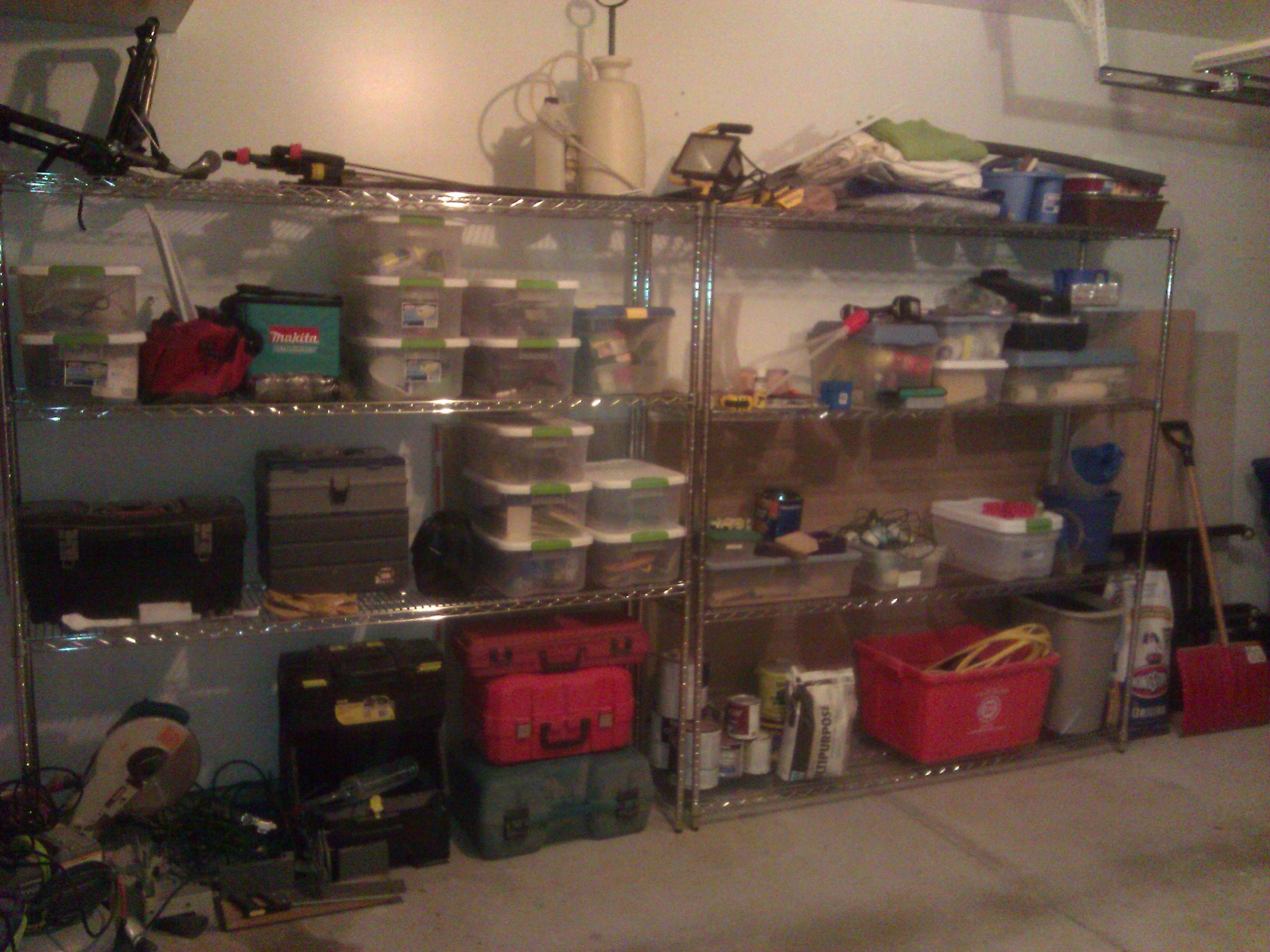 The only think I don't like about these is that the shelves need more support. Being that they're 6' wide, they bow pretty badly if you set a heavy load right in the center. However, I am sure that there's a way to reinforce them, but I will worry about that later down the road. For now, each shelf supports 600 lbs, more than adequate for my needs. The vertical rods also support caster wheels, although I will need heavy duty threaded stem casters not available at any of the big box stores around here for a reasonable price.

Anyway, I hope this update helped.

I bought a bunch of the brackets suggested in Amanda's answer and have since installed one shelf. It is very sturdy. The downside to these brackets, though, is how the diagonal support bar takes up a large amount of space. If you've mounted the brackets every 16", this keeps you from storing large objects wider/longer than 16" on the shelf below. The solution to that is to skip every other stud and mount the brackets every 32", but then you have the issue of sagging. Originally, I bought 18"x96"x0.75" lengths of MDF, but this will not work for 36" support spacing, so I will need to get stronger wood like plywood. However, there will still be some sagging involved at 32", so it appears that BrianK's suggestion to put a 1x2 along the edge will give it more support. Is there a technical term for such a strip? The term "shelf edging strip" seems to come up in Google searches, but I don't see a lot of products designed for this. I'd like to see some sort of c-shaped metal strip on the market that fits snug along the edge of a board rather than having to glue/screw a 1x2 onto the edge of the shelf.

The other option is to use use vertical shelf tracks and then mount adjustable shelf brackets onto them. This would allow 16" bracket spacing with no cumbersome support bar to get in the way. The problem is that I cannot find any heavy duty, adjustable brackets that work with plywood that support in the neighborhood of 300 lbs per bracket.

So, in summary, what I like about Amanda's brackets are their 650-lb weight capacity and ability to support a 16"-deep shelf. The downside is that support bar. The adjustable shelves, on the other hand, don't have such a support bar. Unfortunately, they can only hold around 100 lbs per bracket. Is there a way to get the best of both worlds here or am I going to have to build shelving from scratch? I definitely do not want to do that.

Since you are contemplating shelving, I am going to assume that

What is the Maximum Weight I will be Storing?

I've got a shelving unit in a storage area that can fit at absolute maximum volume capacity about 24 of these 10 gallon storage bins: 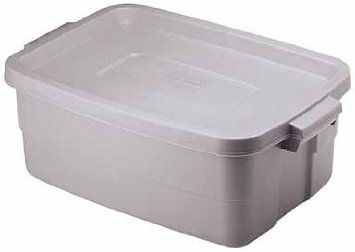 With all 24 on the shelves, I physically cannot add any more weight to the shelves because all of the volume is already consumed.

I estimate the maximum weight that I put in each of those bins is about 50 pounds of stuff. From moving them around and comparing them to the dumbbells at the gym, it's way more that 20 pounds and definitely less than 100 pounds. As a reference, filling the tub with water would weigh 81 lbs, filling with lead is about 946 pounds.

So, based on my estimate, I will be storing up to about 1200 pounds (24 tubs x 50 pounds each) of stuff on that shelving unit. More than 1200 pounds is unlikely because the shelf will reach its volume capacity first.

In this case I dare not use a shelving unit that will collapse under less weight than 1200 pounds because there will be nothing preventing an unsuspecting family member from exceeding that weight by adding another item to the shelf.

The shelving unit in the example above is 4'x2'x8' (WxDxH) or 64 cubic feet. Given the 1200 pound capacity, the density of stuff I am storing works out to 18.75 pounds per cubic foot. When I design shelving for my home, I use the round number of 40 pounds per cubic foot for a 2x safety factor.

For your example of 1.5'x8' shelves, assuming they extend to an 8' ceiling, you should design for an astounding 3840 pounds of load (1.5'x8'x8'x40 pounds per cubic foot) to be safe. This is not an exaggeration. Good shelving allows you to store a remarkable amount of weight in an extremely small volume, that is its whole purpose after all.

The stuff you are storing on wall mounted shelving is an overhung load. The wall mount shelving supports this overhung load by applying a torque to the wall to which it is mounted. Walls in residential construction are not designed to support a significant amount of overhung load.

To make matters worse, the torque on the wall increases with the square of the depth of the shelving because you are increasing both the weight and the lever arm of the overhung load. So, the torque from an 18" deep shelf is nine times the torque from a 6" deep shelf. Because of the squared relationship with torque, I never use wall-mount shelves deeper than 10".

On top of all this, even if your wall is able to withstand the torques involved, there are two additional worrisome aspects to consider:

A real risk is this scenario: A child climbs a wall mount shelf loaded with hundreds of pounds of stuff. The weight and motion of a child causes the multiplied forces in the bracket to exceed the failure strength of the bracket. This causes a catastrophic failure of the shelf's ability to support the load, and the child and load falls to the floor, crushing the child.

Use Free-Standing Modular Shelving Instead

All of the problems that results from multiplying forces, the squared relationship of torque with shelf depth, and a wall that can't support weight are alleviated by using free-standing shelving.

As I understand it, the EZ Rect system's patent has long expired, and there are now many manufacturers of that system. I've been using a generic version of that system for all my high-density household storage for almost 10 years.

Here are the benefits of EZ Rect Type 1 shelving solution as I see it:

Whatever system you end up with, you should expect the above benefits to be standard -- if it's not, keep looking.

Here is a picture from my last moving day. Shown is 7 "bays" of dismantled shelving capable of safely storing about 24 tons (42,000 lbs) in about 600 cubic feet of space. 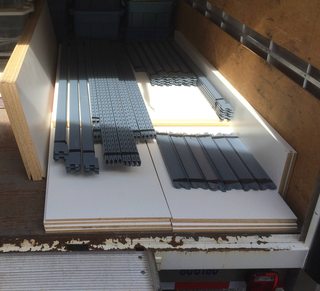 A worker died in this workplace accident in 2012 when an overloaded shelving system collapsed.

This is an extreme case of what can happen. I think it is instructive of the dangers nonetheless.

The great Jon Skeet tweeted this photo of what seems to be catastrophic failure of a wall-mount Cookbook Shelf: 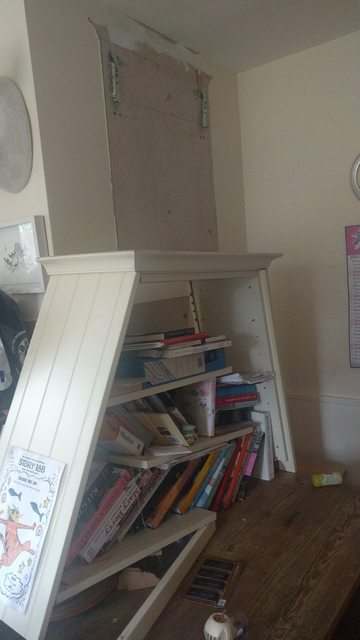 Don't use brackets. use two by threes to make shelves of the size you want. frame with them edge up and screw 1/2' or 3/4" plywood on top. bolt the back edge into every stud. every five or six feet on the edge furthest from the wall bolt in another 2 by three that is oriented vertically and goes all the way to the floor. I support a very large amount of weight on shelves with this system. if the span ends up too big and sagging occurs you can stiffen the shelf by adding another two by three behind the outermost one.

I would use 3/4 inch plywood. Its lighter and stronger than mdf. You may want to put an 1x2 on the front edge of each shelf for extra strenght. I would go every other stud with the brackets.

Everbilt makes deeper brackets with a cross piece for stability. I got ours at Ace, but Home Depot carries them, too.

Whether or not the MDF is strong enough really depends on the MDF. It is surely strong enough if you hit every stud, so you could mount braces at every third stud and start filling the shelves. If they sag even a little, add more braces.

You can get real "hanging" storage brackets at the big box stores. These can be chained together to create an inverted tower of shelves that suspend from the ceiling. 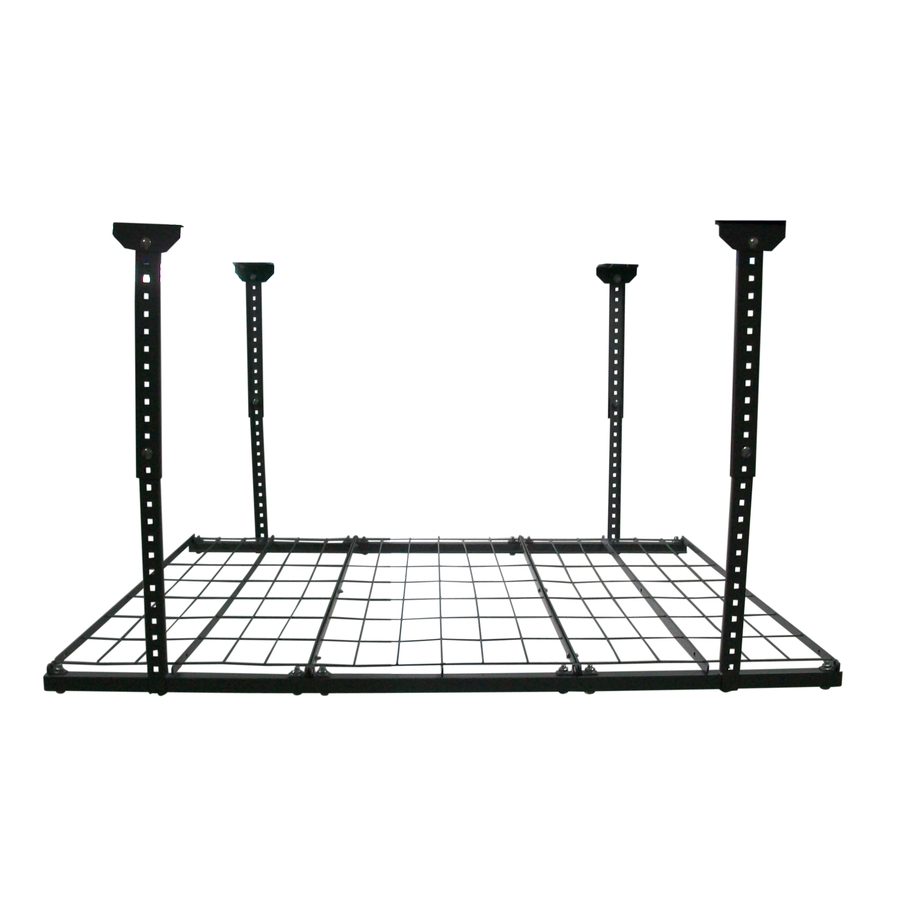 This is only one example. They have a wide assortment of similar hanging brackets of varying strengths and thicknesses. Check the storage aisle and that vicinity.

19
How much weight can you mount to a wall?
0
What should I consider when designing a simple bookcase that will be built without power tools?

4
Is there any harm in using shorter shelf brackets with a deeper shelf?
7
How should I attach the cable of a cable-supported shelf?
0
Can I use these brackets to make wall mounted bookshelves?
2
Support for shelves already on L brackets
0
Load bearing water resistant substrate for floating shelves in kitchen
1
Thickness of Acrylic for shelves with 39" span
6
AAC (aka Aircrete, Thermalite) wall + IKEA ALGOT shelf weight load capacity
1
What length bracket is required to hold 1.25" thick wood shelving with 11" depth?