5A Round Pin Socket Wiring and Fusing

I am looking to install 4 5A round pin sockets on the lighting ring, so we can switch on lamps around the room using a switch by the door. I have 2 questions; Wiring and Fusing.
Part 1 - Wiring
How should I run the wires to each of the sockets?
Option A. Seperate wires to each (My prefered option for ease) 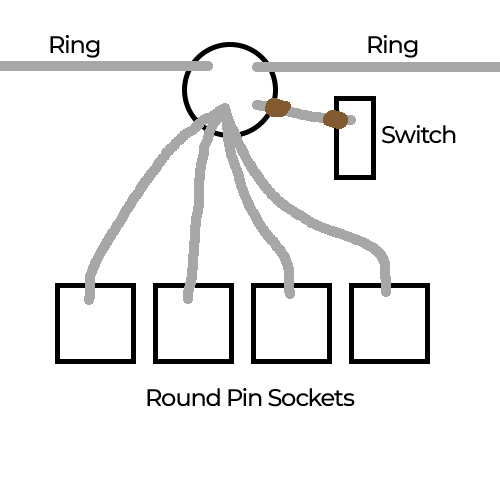 Option B. Wires between each socket 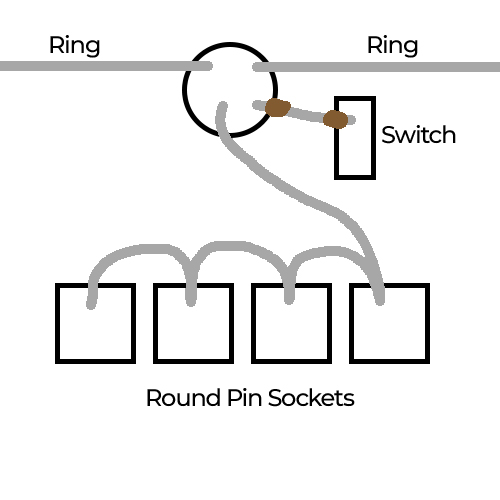 Part 2 - Fuses
Do I need to add fuses to any of the sockets or plugs? The reason I ask this is Screwfix has the plugs and sockets, but they do not have fuses is either sockets or plugs. (But are still listed as 5A)

There's no such thing as a lighting ring in UK domestic wiring. Lighting circuits are radial. (They run out from the fuse box but don't return to it.) If you are taking power from one of these you don't need additional fuses - the fusebox already provides the needed protection (5 A fuse, 6 A MCB). If you are taking the supply from a 30/32 A ring circuit you'll need a fused spur unit fitted with a 5 A fuse. (You are likely to need to buy this with a 13 A fuse and replace it.)

You can use either option to wire the sockets. Note with option 1 you'll need to use a sufficiently large ceiling rose cover to accommodate all the connections (or run them from the switch on a suitably deep backbox). Wago connectors can be useful for hooking everything up. Apparently 2 A plug/sockets are OK to use on a lighting circuit but the larger 5 A ones are easier to wire up.

I would get an electrician to do it, because the Wiring Regulations are prescriptive and can be complex. It also means he's chasing the walls (or fishing for cables behind plasterboard) and not me.

What I would anticipate the solution to be is based on your second option, although the switch is incorporated into the socket wiring. One reason for that is that it seems a reasonable way of getting power from the ring in the ceiling to the sockets on the skirting board. Another reason is that trying to get three additional cables into the ceiling rose as per Option A will typically be impossible.

Note: this is only a broad outline. I haven't checked the Regulations. Another reason for using an electrician.

As Graham Nye indicates, lighting circuits may not form a ring, but the lights are strung out along a single spur. This still means that at each ceiling rose (except the last), the mains supply comes in from the previous rose and goes out to the next one. It has the appearance of a ring.

To change from centre lighting to socketed lighting, the blue core to the switch needs to be connected to the neutral of the ring in the ceiling rose. You then have a standard live-neutral pair to the switch (with the earth core). That cable will probably be rated at 5A, and is protected by the 5A fuse in the lighting ring.

Install suitably-rated cable vertically down from the switch to a new unswitched fused connection unit at skirting level. From there, run cable horizontally around the skirting to sockets as desired. [You don't need a fused connector here, but it may make the job easier and the cable runs more obvious. You could simply use a single length from the switch to the first socket, with a right-angle bend where it turns along the skirting board.] You can get skirting board with a channel in the back for cable if that's easier. Cables can't run diagonally: they must run vertically or horizontally and if horizontal then that must be obvious.

Because this is run from the lighting circuit, the fuse in the connection unit (if you have one) needs to be appropriately-rated: the circuit fuse is 5A so there's no point having it larger. 3A should be ample, and lower ratings are available.

Using the existing cable between the ceiling rose and the switch means that the neutral core in that cable needs to be connected to the neutral core in the new cable. One easy way of doing that is to use a double-pole light switch (probably rated at 10A, and probably stiffer than a single-pole 5A switch).

If you anticipate installing a two-gang switch and adding lighting sockets to the existing centre light, then this method won't work because the cable from the rose to the switch can't function as both switched and supply. You'd need an additional supply cable from the ring. This method also won't work if the existing cable to the switch doesn't have an earth core, because the sockets must be earthed; the two-core cable will need to be replaced.

2
Can I modify 3 ampere table lamps to work on 5 ampere round pin plugs?
3
How do I rewire this circuit controlling several lights and receptacles?
2
Running power to an external building
0
Wiring power cord Adapter to connect a Round 3-prong female generator plug to a round 4-prong Gen Trans Switch
0
How to extend wiring for extra high current sockets/appliances in Utility room
0
Need help building a ceiling lamp (LED Pin-socket Bulbs to mains)
0
ELV to 5amp circuit?
4
How to add a 400v 3 phase plug and/or extra distribution panel with only two breaker spaces left?
0
Wiring Light Fixture with 2 Sockets into Junction Box with 2 White, 2 Black, and 1 Red Wire
6
Why are these electrical outlets interconnected?