How do I make a bulk holding tank for fire trucks to fill, using 3 different tanks of different sizes and different elevations?

I need to make a reserve of water for a fire truck to come and suck from. I have 3 tanks on my site that I plan to pipe together, to make one location to suck from all the tanks. Problem I have is that the tanks are at different elevations, so I will empty the highest tank and then the tank will draw air, and not draw from the lower tanks. Or possible that the upper tank will end up filling and flooding the lower tank.

60 cubic meter upper tank, 72 cubic middle tank that is at the same elevation as the draw point, and 36 cubic lower tank.

Note that I can not use electrical items in the system, as it is a emergency supply water and I need to pretend there is no power. 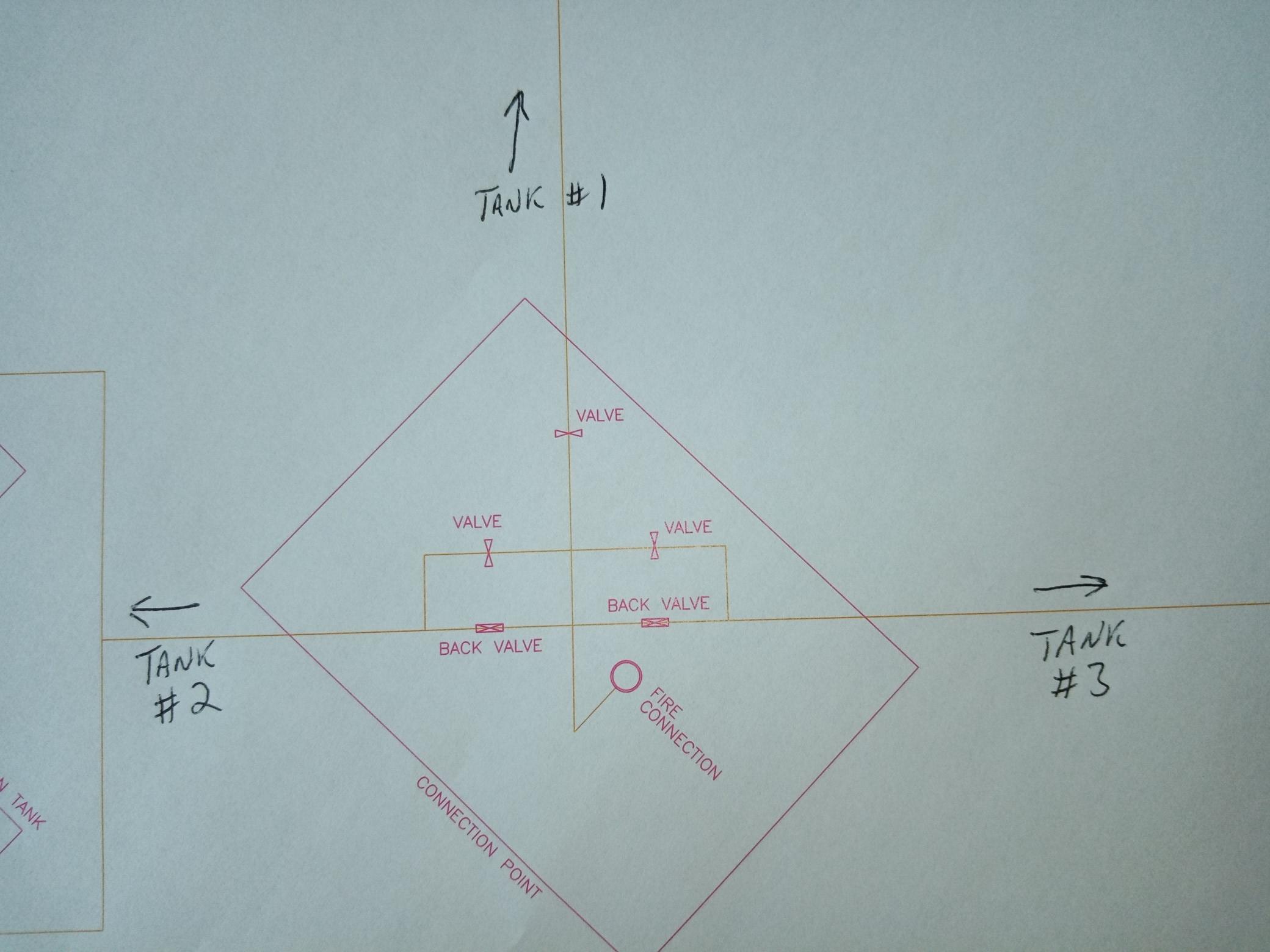 It comes down to, how do I take water out of all the tanks without the fire department sucking air, or running one tank empty?

My connection is both filling and unloading the tanks with water. I expect if I fill tank 1 uphill I can always fill the other tanks from that tank.

One other thing, I agree with all you have said, is there any way to eliminate the valve on each tank, by maybe putting some kind of a gravity or float ball to stop the flow when the water gets to low.

In my cad picture you can see I put a back flow valve to keep water from backing up into the lower tanks, but then when you want to fill all the tanks, can just open the valve.

Filling the tanks should be easy. When the fire department shows up with a tanker, they should have a pump that will provide more than enough pressure to push the water uphill. Remember that it can take 2 or 3 men to hold a hose against the pressure coming out of it! If you hire a pool filling company, they may count on simple gravity flow to get the water out of their truck and into a pool, but there should be enough elevation to take care of your situation. If you want to go with this route, you may consider an extra fill-only point at the highest tank in case you run into trouble.1 Put a supply/fill point at the highest tank and start pumping in. Open all the valves to let the water flow into the other tanks. The lowest tank will fill first. Depending on how well sealed it is, either let the water backup into the higher tanks, or shut off the valve to the lower tank once it's full.

The emptying is a bit more complex, but should be doable:

When it comes to emptying the tanks, if you open all the valves at once, the tanks will (after a few moments of reasoning, but with no scientific method applied) empty roughly in the highest to lowest order, simply based on gravity. However, once a tank is empty, the FD will certainly be sucking air from that tank until they start to draw enough of a vaccume that either they're sucking air through leaks or there's enough low pressure that it's easier to pull water from the other sources. However, that could draw air into their pumps/hoses causing a pause in the water supply at a least, and possibly cavitation in the pump and loss of suction on the siphon from the lower tank (essentially cutting off supply, at least temporarily), at worst. I would think that you'd want (them) to manually coordinate the valve operation to ensure these situations don't happen.

Most importantly, I'd discuss it with the FD while they are there under calm circumstances filling your tanks up, to ensure that they're familiar with the set up and have them recommend a procedure. Put the procedure in writing, maybe ask them to print it on FD letterhead (get a fire marshal/chief or other "official" signature on it), and put a laminated copy in an easily accessible and visible position at the connection point so that if you're not there to direct operations, the firefighters on scene will know that they're looking at a department approved method of operation. Remember, staffing may change, you may be out of town, or even worse, may be incapacitated by an accident or fire itself. You don't want them to rely on memory of a one-off procedure (since your setup will be different than your neighbors) when they're under stress trying to save your property.

1My initial understanding was that the fire department would show up with a tanker to fill this system. It was later clarified by the OP that he is responsible for filling it himself. Since the OP may not have sufficient pumping equipment to push enough water uphill, I changed that part of the answer.

You appear to be setting this up to fail. Don't do that.

If you have three tanks at different elevations, your fire truck fill point is the bottom of the lowest one.

Your system fill point and vent is the top of the top one.

If the two lower tanks won't hold pressure (typical concrete tank that does not really have a tight seal at the top) you'll need float valves on the pipes that fill them from the higher tank so the water does not just leak out the top.

This is a false economy

Obviously what you are trying to do here is preserve the sunk cost of the tanks that are too low to do the job. You are in pursuit of a fallacy. The simple fact is, 2 of these tanks are in the wrong place!

So if the Fire Department is requiring a certain amount of water onsite that comes out of one standpipe without operating valves, then you need to construct additional tanks so the one place has that much storage. The other place can also get a standpipe and be used for auxiliary/backup water, irrigation, potable water or what have you.

The only reliable way to save these tanks is to pressurize the lower ones. Most tanks aren't made for that.

What I would do

Honestly if it was my house, I'd want the firefighting tanks nearby to avoid the flow resistance of 600 feet of pipe. If you could extend the middle tank with 100 cubic metres more, that'd be great.

I would use the top tank for

Now, the problem with the above setup is, that if the firefighting tank system and standpipes develop a water leak, they will drain the top tank first. So we set it up so that's just about impossible: By having all pipes enter the TOP of the firefighting tank(s). The inlet tanks have a vacuum break (either a vacuum breaker or simply an air gap). The outlet draw, which will be a syphon, has a "tee" at the top of the syphon going to either a manual valve of a designed-in pinhole. That lets air into the syphon, so water won't naturally draw over it anymore. The big fire pump will apply active suction which will pull water through it. In fact, you could grade the standpipe downhill to a drain point, and simply have a dry standpipe. That takes freeze issues off the table.

4
Increasing water pressure with pump
0
Excessive Water Running Alert (Left the Hose On)
1
Toilet water valve tightened to OFF position but water keeps filling up tank
2
What is the Correct Hot Water Expansion Tank Pressure
1
My toilet sounds like an angry goose
1
Toilet Supply Valve Not Turning Off
1
Loud brass valve - how to make it quieter?