How do I wire this ceiling light?

I know I can connect the loose cable from light switch to light fixture, but what do I do with that extra cable coming down to the outlet? Previously this was a fan/light combo with remote that had two loose three conductor (with red wires) cable coming from the light switch to fan installed by previous HO. 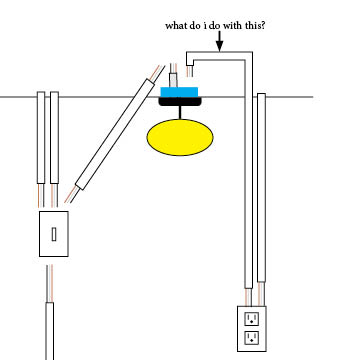 In electrical we don't just throw wires around.

We start at the service panel and we run a cable from there to the first point-of-use (aka "outlet": that's a switch, receptacle etc., sometimes a lamp but there are special rules required if we do that).

From there (often, not always) we run another cable to another outlet (again: switch, receptacle, etc.)

It's a daisy-chain: from panel to outlet 1 to outlet 2 etc.

It's perfectly OK to have branches/tees: so outlet 3 could have its cable go to outlet 1 (it doesn't need to go to outlet 2).

The cable layout cannot have loops, though. Two separate chains coming from the breaker (or branched off a string) cannot rejoin. If they do, they must be carefully separated in the box. No wires from either side can touch, except the bare safety ground wires.

In particular, if turning the power on causes both sides to be energized even though they're not connected yet, that means they shouldn't be connected because that would be a loop.

On the other hand, it's possible one side is entirely dead and has no route back to the panel. In that case one side needs to get power from the other. Maybe the old /3 cable carried always-hot for the onward circuit + neutral + switched-hot for the lamp.

I get you don't want a fan, but many people do. The next buyer of your home might be one of them. Having /3 cable from the fan to the fan-rated box will mean that person doesn't have to bust out drywall later to reinstall what you removed.

If the box is not rated for fans, don't bother; no fan should be there.

Not the answer you're looking for? Browse other questions tagged electrical wiring lighting light or ask your own question.

4
How can I replace a ceiling fan light pull chain?
0
Is it wrong to connect the red ceiling wire to the blue wire on my receiver for the remote and the blue wire from the fan?
4
Is it OK to use 12-3 awg to wire a ceiling fan and light?
0
Wiring new ceiling fan to existing light switch box
1
Wiring multifunction fixture to 2 switches, 2-wire cables
1
Ceiling fan with light - electrical box has two cables, one with a red wire