How do I remove this drain pipe from my garbage disposal?

I found a leak in my garbage disposal, and I think I know the source (possibly a crack in the drainpipe).

However, now I'm stuck on how to actually take off the drain pipe.

The disposal pipe (3 in the picture) seems to be getting stuck right after the threading in piece #2.

Is there a correct way to take the pipe off? 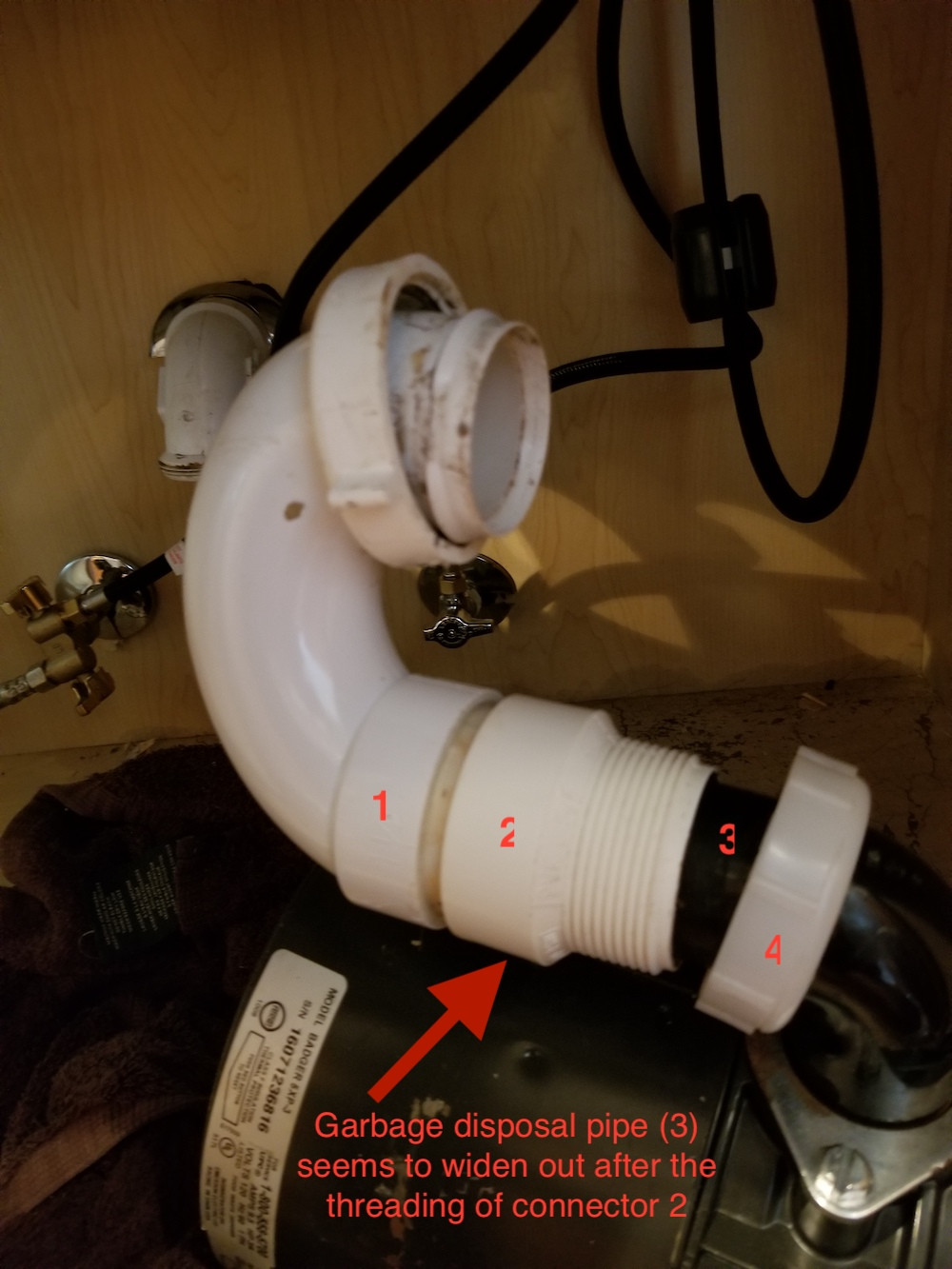 That should be a slip fit and simply pull out.

It's possible that some prior worker glued the joint between 1&2 with 3 inserted, and it got stuck that way. It's also possible that it's merely stuck with years of crud. In either case, it should pull out, twisting it while pulling may help to break whatever is sticking it loose, and if it just won't go you need a whole new set of parts 1, 2, & 3

If you take pipe #3 off of the disposal you can take it somewhere with space that you can really work on it. Maybe clamp the metal piece and then force the PVC. You suspect the PVC to be the culprit anyway so it you break it removing it no harm done. You are replacing it anyway.

But dont mess up pipe #3 because you want it back on the disposal!

You're looking at parts that all together cost ten dollars and somewhere among them there's a leak.

Visit your local plumbing source. Obtain replacements for all the drain parts, including the disposal outlet elbow #3. They're fairly standard and it's unlikely that the one you have now needs to be carefully preserved.

The metal clamping ring which holds the outlet elbow to the disposal is the only part that's possibly special. Break or cut the drain pieces apart by any means necessary in order to recover that ring, then re-assemble with all new drain parts.

So, as several other answers indicate, Part-3 should just pull out unless glued.

Unfortunately for you, if it is glued then you have a bit of a problem because Part-1 is half of a trap and the other half looks like it is glued to the drain line coming out of the wall. Those traps often have a proprietary thread on the union nut so it is often difficult to replace just half of that type of trap. This makes it more complicated than some answers make it seem.

If you take your half of a trap to a plumbing shop and the union nut happens to fit a new trap at the shop, you are lucky and can replace parts-1, 2, and 3. If you can't find a compatible trap then you will need to replace Parts-1, 2, 3, and 4 (4 would be the other half of the trap), which requires cutting off Part- 4 (which leads to the pipe in the wall being too short, which leads to... frustration).

I hope you can get Part-3 to pull out.

Not the answer you're looking for? Browse other questions tagged plumbing pvc garbage-disposal or ask your own question.