Is occasional puddling of water in an unfinished basement a problem that needs to be addressed?

In a early 20th century New England home of wood frame construction and foundation of fieldstone and brick with some CMU, we get some puddling of water in a few areas of the unfinished basement floor after a strong rain. The "slab" is not a modern, thick, floated concrete affair, but almost a skim coat of some kind of grout or cement over dirt (related question: what's this floor made of?). The water appears to be coming up through this basement floor. We also get some seepage through the foundation walls, and there's some dark discoloration of some of the bricks. 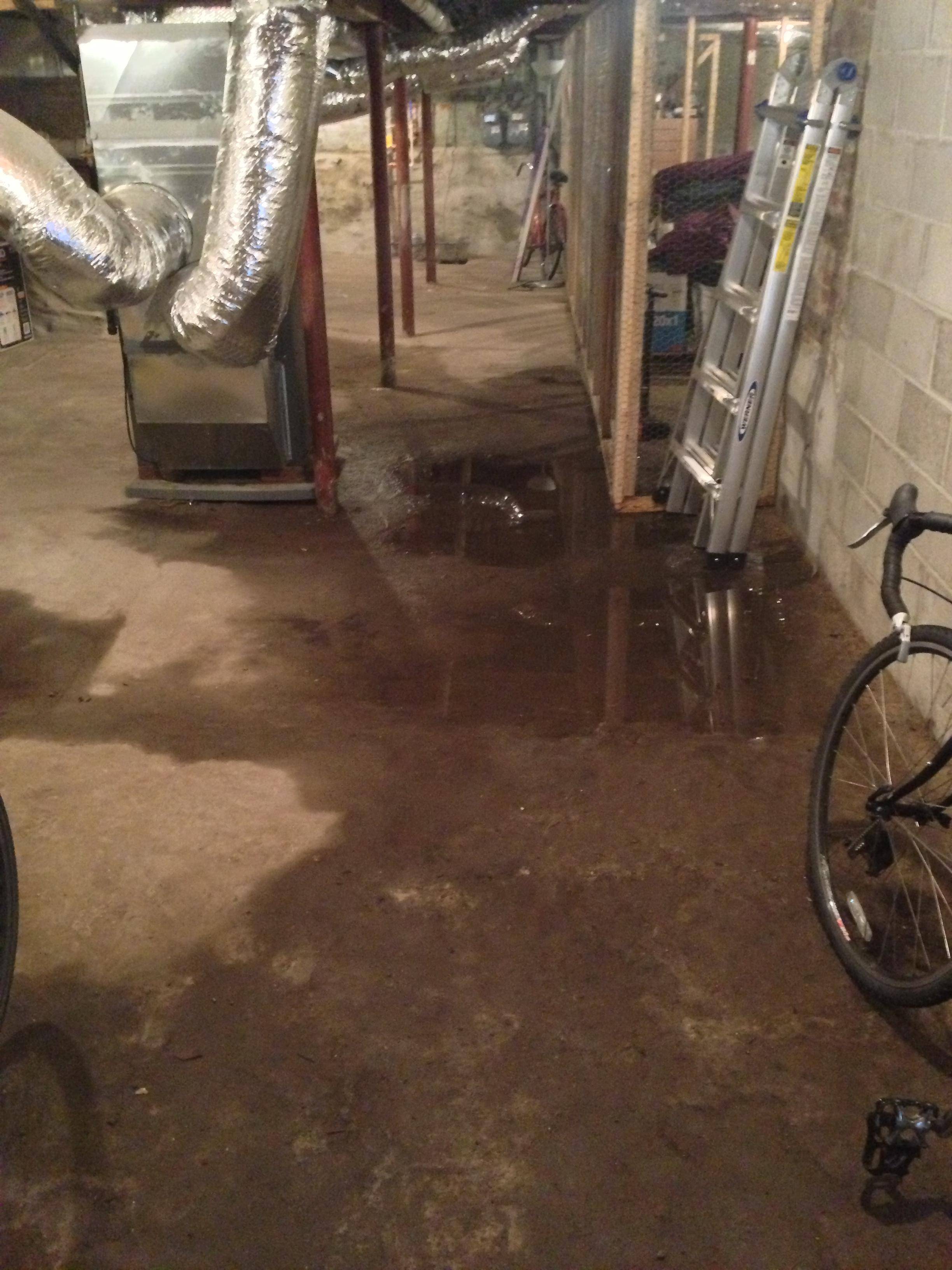 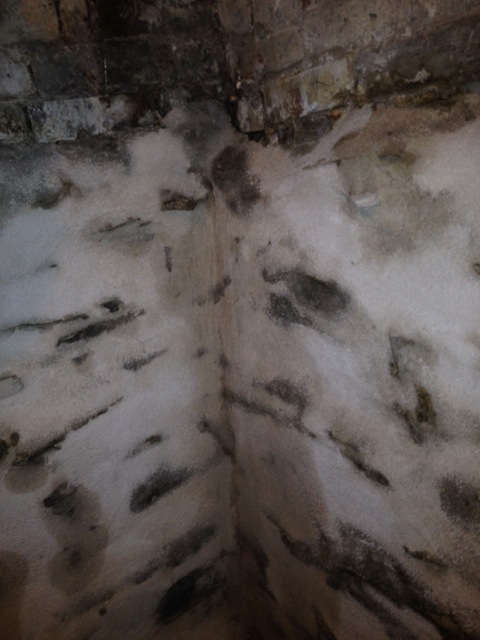 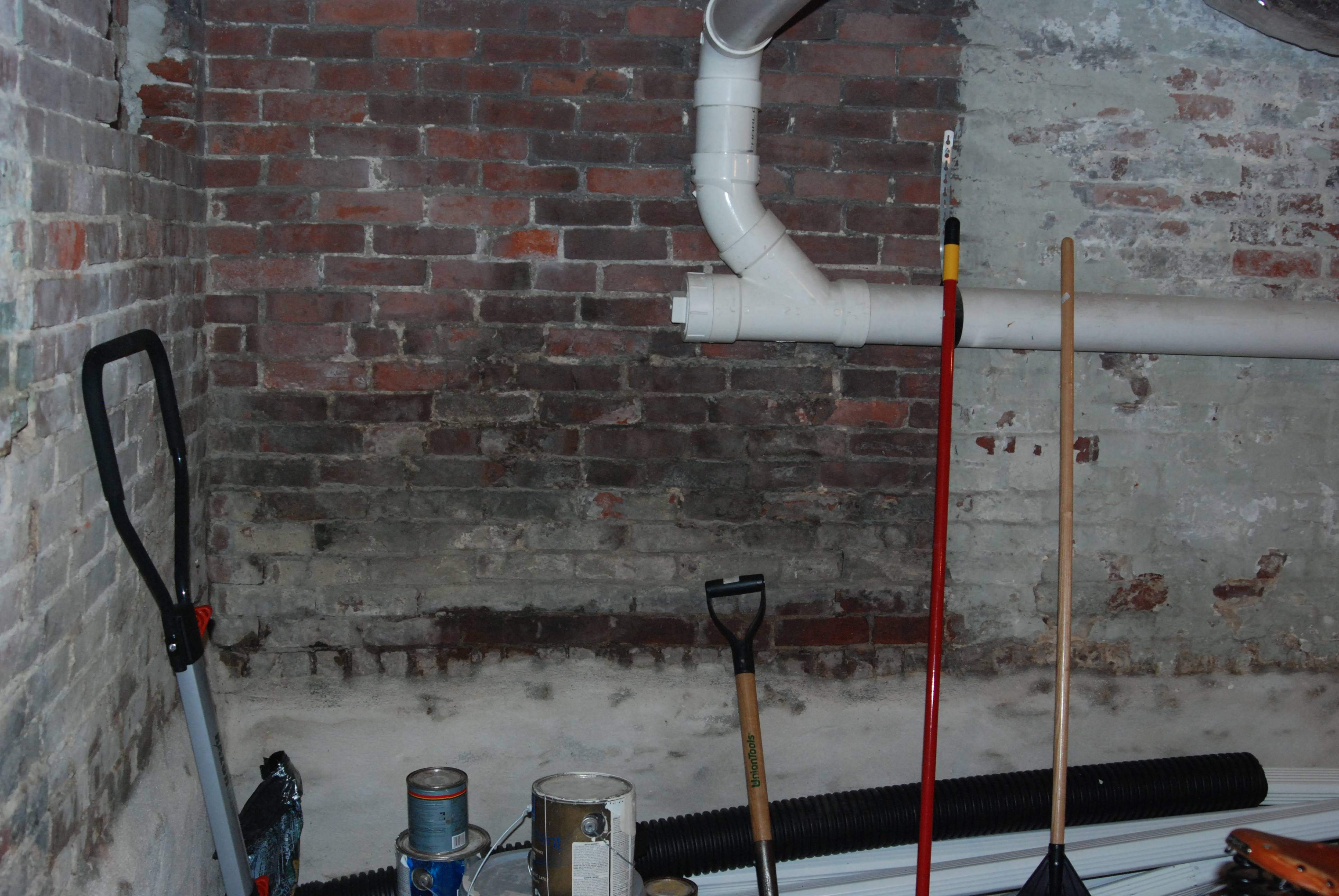 We're in an urban setting with tight property lines (only feet between structures) and no natural grade to move the surface water away from the foundation. The downspout situation on the property is not very good. We think that the cure for the problem would be connecting the roof leaders (downspouts) to an underground drywell/recharger system to move the stormwater away from the foundation, but this would be a fairly pricey endeavor.

UPDATE: I should have been more clear about the downspout situation. All are intact and in good shape, and well sealed. The problem is that the buildings are so close together here that there's no way to extend the downspouts in such a way that they would dump more than a couple feet away from a foundation wall. If I extend the downspouts away from this basement, they shoot into another basement. There's also very little permeable surface on the property (mostly paved). This is why we think hard piping to a big drywell would be required, lest our problem become our neighbors problem.

If the occupants are not bothered by the occasional wet basement (used only for storage), would it be OK to leave the situation the way it is? Need we be concerned about other problems that this dampness and occasional flooding could cause?

I would definitely be concerned, mostly about mold but also about property damage (you said it's used for storage) and long-term foundation damage.

If your downspouts are not properly discharging water away from your house then you definitely want to address this. In the grand scheme of wet basement solutions, this is probably the cheapest fix you will find. Tight property lines or not, make sure that your downspouts discharge water far away from your foundation. It's hard to say whether you would benefit from a dry well.

If this fails then you should investigate whether you have a French drain and/or weeping tiles and whether that system has failed. If it is just clogged it could be a somewhat easy repair. If you don't have one or it has failed beyond repair then you will need to install or replace the drainage system. You said your house has tight property lines so it might not be realistic to dig up the outside, in which case you'd have to look into an interior French drain and sump pit solution. Either way this is probably going to be expensive.

I would definitely advise you to bring an expert in to review your situation and suggest some solutions. Make sure to get a few opinions/quotes. Fixing this this is probably outside of the DIY-scope for most people as messing with your foundation is risky business.

I second downspout suggestion. It's a cheap fix and it will most likely yield the most results. I had a similar problem with my basement(walls are made of large granite blocks) By fixing the broken downspouts and also extending all of them just a few feet away from the house I have completely removed water problem.

Also inspect the state of all gutters and downspouts during the rain(or pour water into them). You might find out that seemingly normal gutters are leaking in surprising spots.

I had a Y joint in one of my downspouts that leaked water all over my facade and into the basement.

Also if your house is not offset from the sidewalk, I would make sure the joint between your wall and the sidewalk is properly mortar so water doesn't go there.

And lastly - double check that your gutters are free of obstructions from leaves/twigs. Debris can easily make them overflow and leak in unexpected locations

Not the answer you're looking for? Browse other questions tagged basement moisture or ask your own question.

3
Is this old basement floor concrete, grout, or something else?