I'm replacing a Price Pfister widespread faucet. I have removed the handles, but cannot figure out how to remove the center outlet. A tag on the hot valve says the model is WL8-50??. The last two characters are smudged but resemble 03, 08, 0P, 93, etc.

There is a brass t-connector/mixer connected to the center piece, and there are two hex shaped items: one on the bottom of the t-connector and one next to the sink surface (see photos).

I haven't seen any set screws, but undersink is a tight fit for me.

How do I get this thing out! 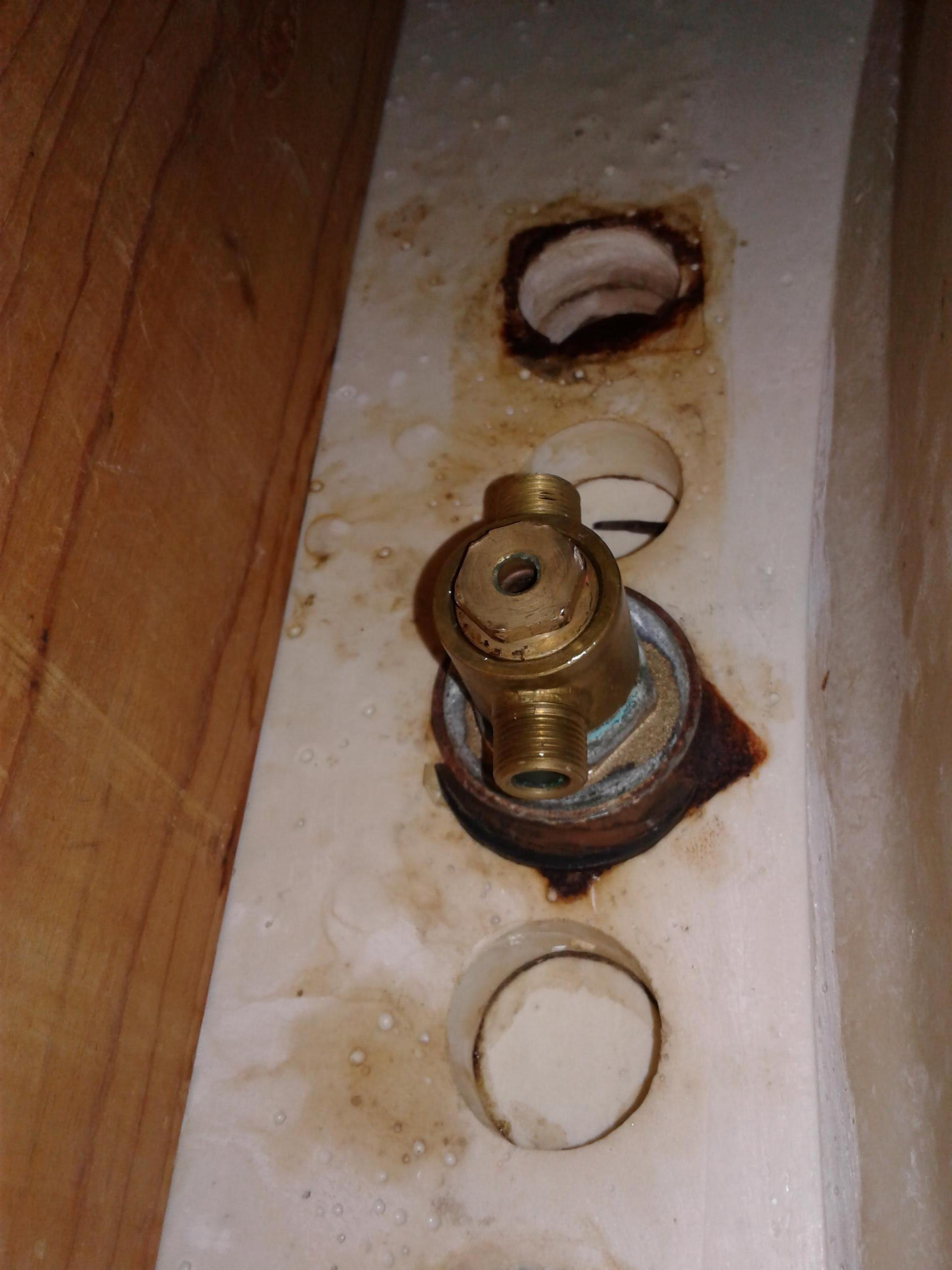 That whole tee piece needs to come off, then there is a hex shaped nut under it that holds the spout assembly to the sink. It's often a 2-person job because the force needed to remove the tee piece and nut after its been on there so long can cause the spout itself to turn.

So... someone needs to hold the spout up top while another removes the plug (which looks like it has been wrenched on and drilled into) then the tee piece. Then the nut needs to be removed. It's a tough jog and a variety of tools (Channellocks, pipe wrench, hammer to tap with, plumber's sockets, etc.) are helpful. Also helpful would be to soak it with penetrating oil first. I will warn you that it would not be uncommon if destructive means were necessary...

First, the model number is WL8-500P. I was able to get the installation document from PP that showed all the pieces.

The t-connector is held on by a metal omega spring clip, which I had already removed, and friction between the connector and two internal o-rings. I didn't have to remove the "plug" but I did add a lot of penetrant and banged with a hammer to loosen the corrosion. Then I rotated and pulled that connect off.

There is a 1 3/6" nut holding the faucet on the underside. Again, penetrant and hammer loosened the corrosion enough to remove it. Again, removing the plug would not have helped.

One thing which did help is I cut out one of the rubber washers on the underside so that I could easily jiggle the faucet. That helped loosen the corrosion on the 1 3/16 nut.

Not the answer you're looking for? Browse other questions tagged bathroom faucet or ask your own question.

5
Why is my kitchen faucet dripping even after water is shut-off?
2
How to fix a self-turning handle on a Price-Pfister single handled faucet
0
How to connect flexible tube to copper pipe
0
Is my leaky faucet missing a valve seat?
4
How can I wire 3 Lutron Caseta dimmer switches in bathroom?
8
Bath and sink connected on same pipe - bath gurgling when sink emptied
0
Removing mini wideset handles without set screws or mounting nuts
3
What is this thing that holds widespread bathroom faucet handle to sink? How do I tighten it?