What is the purpose of this joint in my wall stud?

I am getting ready to install a new bathtub and shower.

After ripping everything out I noticed all the studs behind the original bathtub wall have cuts. See photo.

If anyone can explain why the studs are pieced together this way I would appreciate it very much. 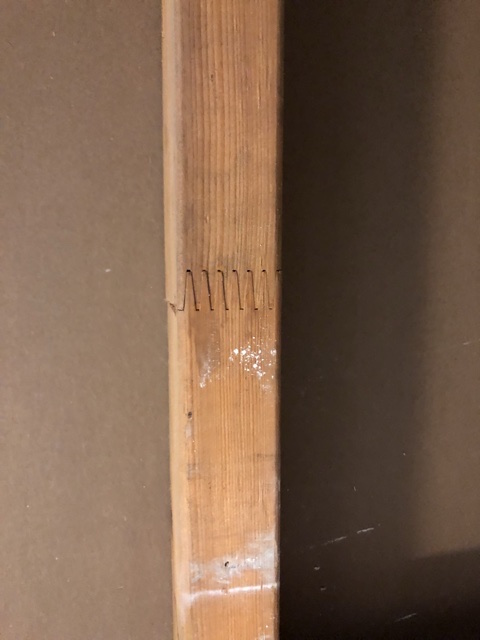 Those are called "finger jointed studs". These joints are weaker than regular 2x4 or 2x6. I do a lot of woodworking and when gluing boards together (for like a table top) the glue joints are actually stronger than the wood itself. But for some reason, that's not the case with finger jointed studs, they are just much weaker than the intact 2x. That and the alignment issue between the pieces make this product junk if you ask me.

The contractor that built my house started using them for interior walls. Some of the joints were off by as much as 1/4", which would have made sheetrocking much more difficult. My plumber said he hates them because unless you brace the stud when drilling, they'll break at the joint. To demonstrate, he got a short length (about 4') with a joint in it, elevated one end on a 2x and then proceeded to kick down on it. It broke right at the joint.

After a few interior walls were built with that crap, I inspected and found many cases where the joint wasn't at all even. I told the contractor to tear those walls and not use that crap anymore. He didn't like me for it, but later, when he used them on a project for himself, he admitted they were crap.

To answer, since they are already in place I wouldn't worry about it. The vertical load capacity isn't affected, esp. not an issue in a non-load bearing wall.

Sorry for going off like this, but finger jointed studs are just not a good product.

That is a join between two bits of timber.

The ends are machine cut and glued.

As others have said, this is "finger jointed" lumber. The quality of such lumber varies from quite good to kind of piddlin' poor. The purpose of the joints is to allow knots and other bad spots in the lumber to be cut out, producing a piece that is straighter and easier to work with than it would otherwise be (and of course allowing longer pieces to be produced from a given tree).

And note that similar joints are commonly seen in wood trim, particularly in exterior trim. In exterior trim eliminating knots and splits is especially important, so the use of the technique definitely improves overall quality without running costs sky-high.

Not the answer you're looking for? Browse other questions tagged framing studs remodeling or ask your own question.

1
Hanging a new wall with Genie Clips and need to install a few studs. Will this affect the installation?
2
Plumbing cuts through five studs. Is ok?
8
What is the concept behind drywall studs?
3
Newly framed bathroom wall not square, how bad will the tile look?
4
What's the right way to insulate and frame around this pipe?
0
How to ensure shower handle flushed when replacing shower wall to tiled wall
2
Installing a Heavy Sliding Barn Door into Metal Studs
1
Framing Advice - How to re-frame opening of non-load bearing wall
1
Is the wooden-stud basement wall that runs next to & parallel to the shared concrete wall separating two townhouses load-bearing?