What to look for

I have a door that is stuck closed and it looks like the frame of the door is getting pushed on from a shift in the opening.

What should I be looking for when I open the drywall up to find the issue? 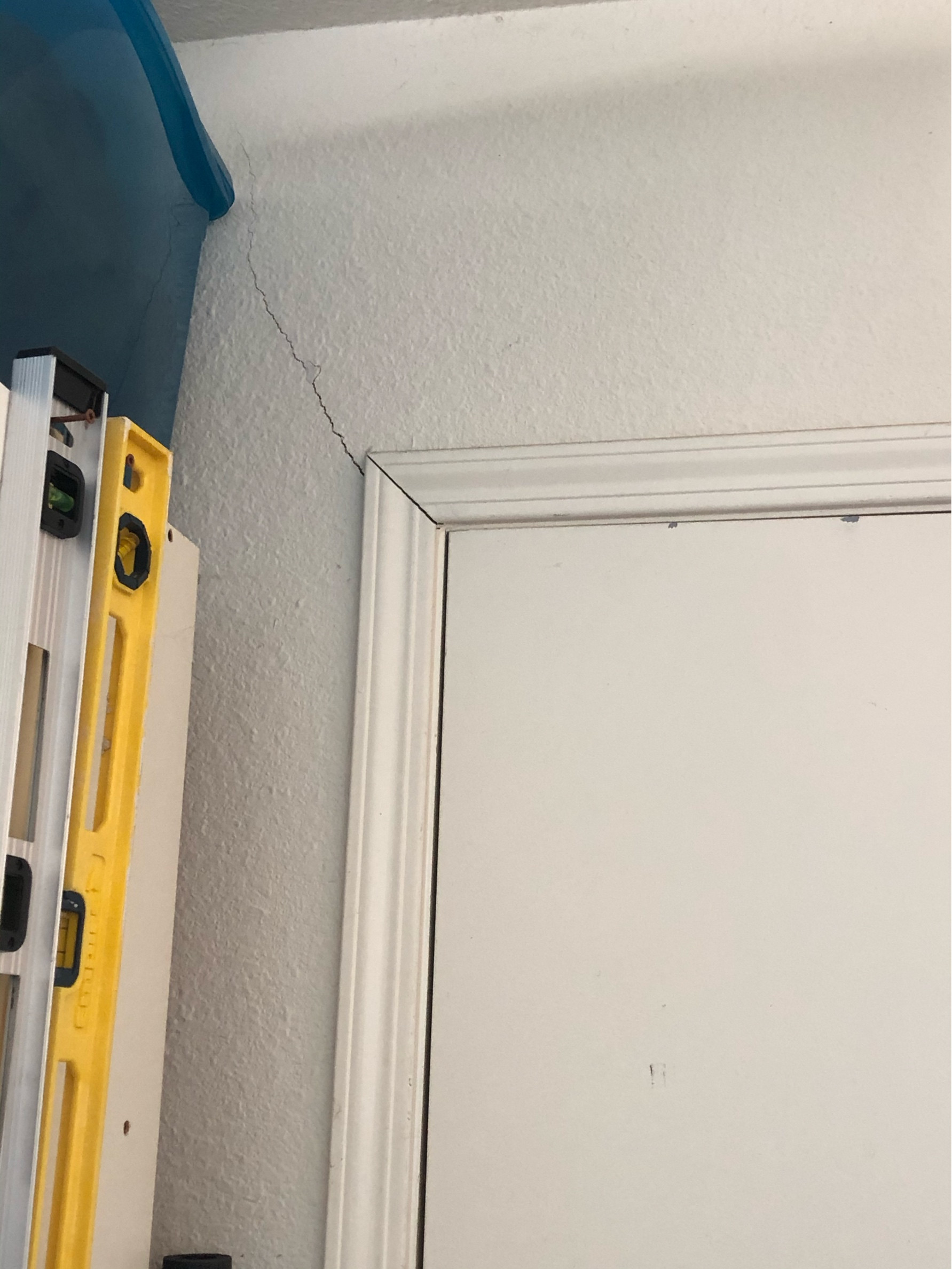 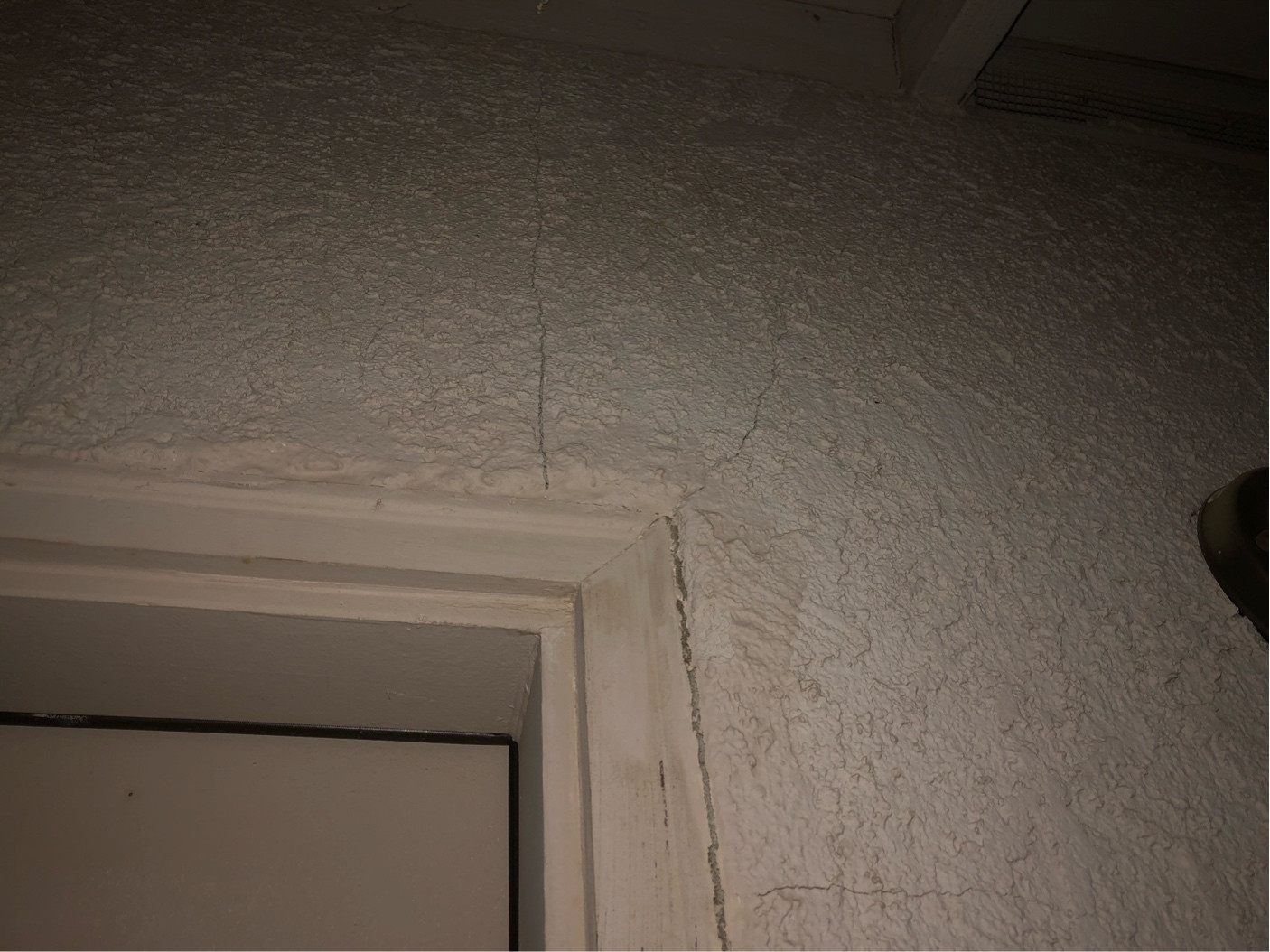 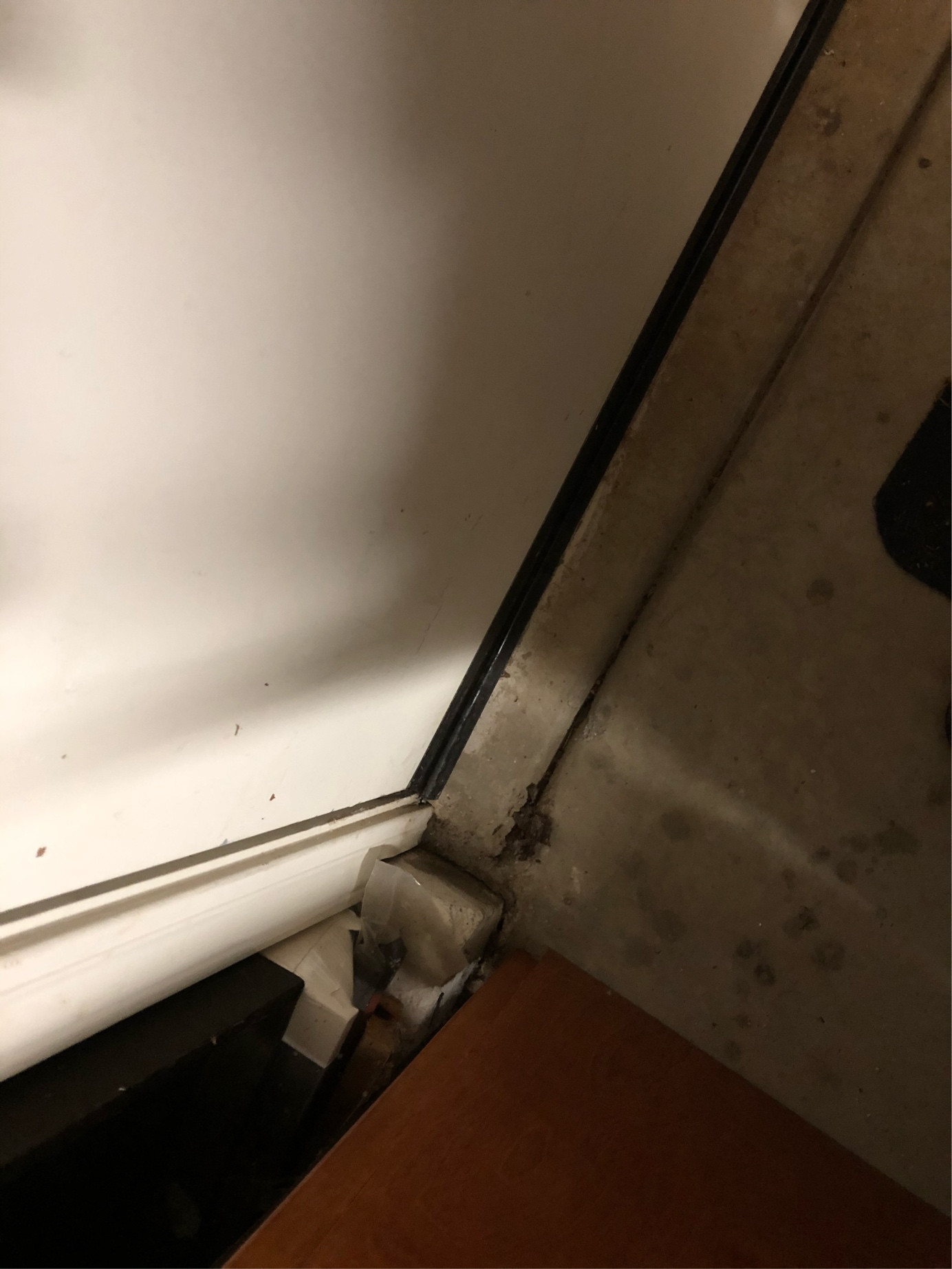 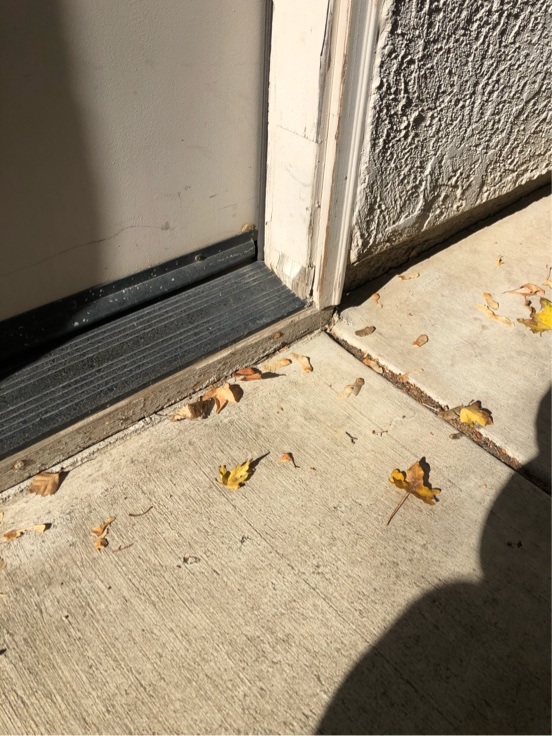 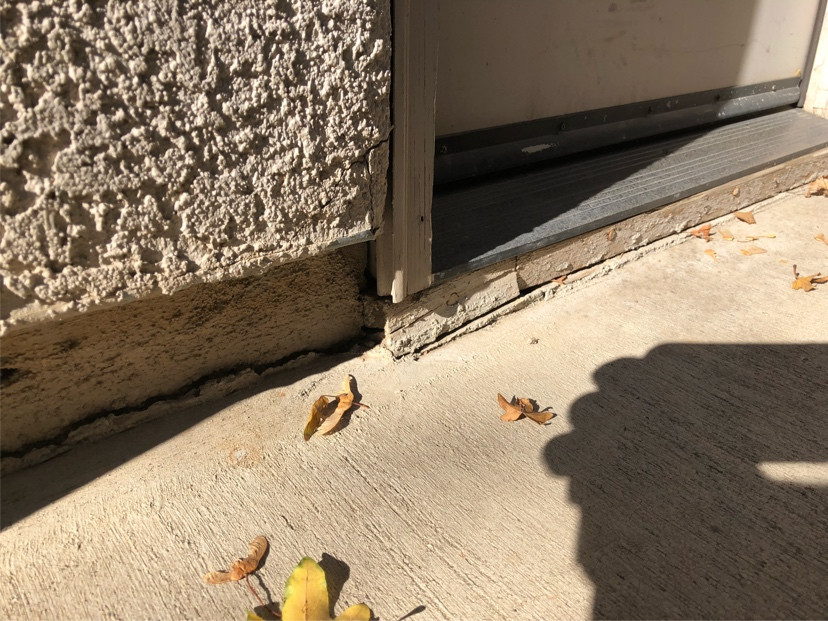 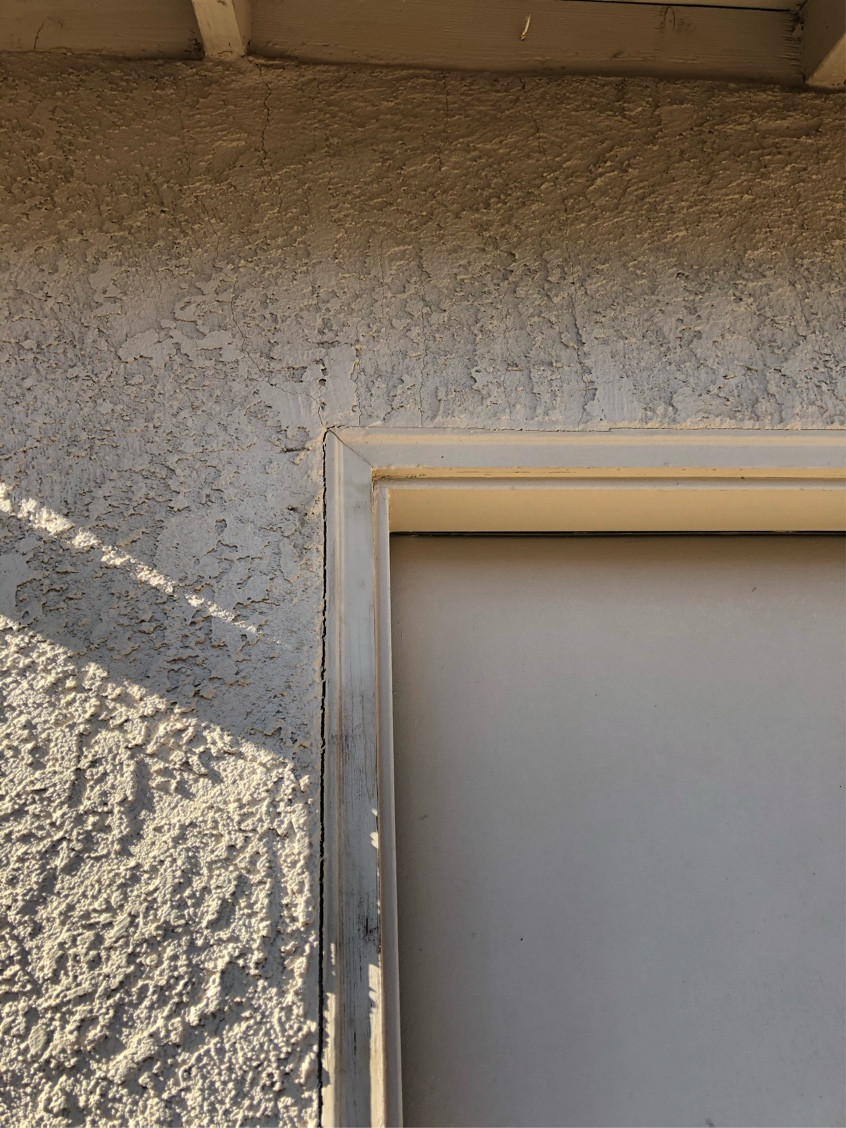 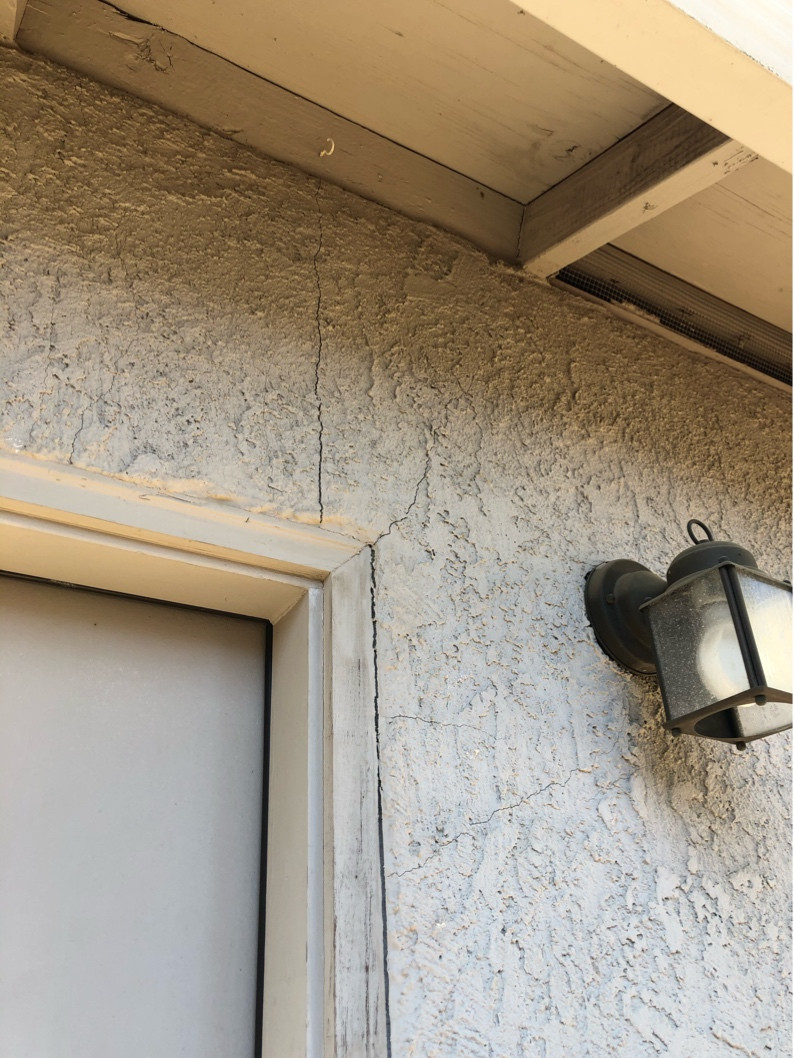 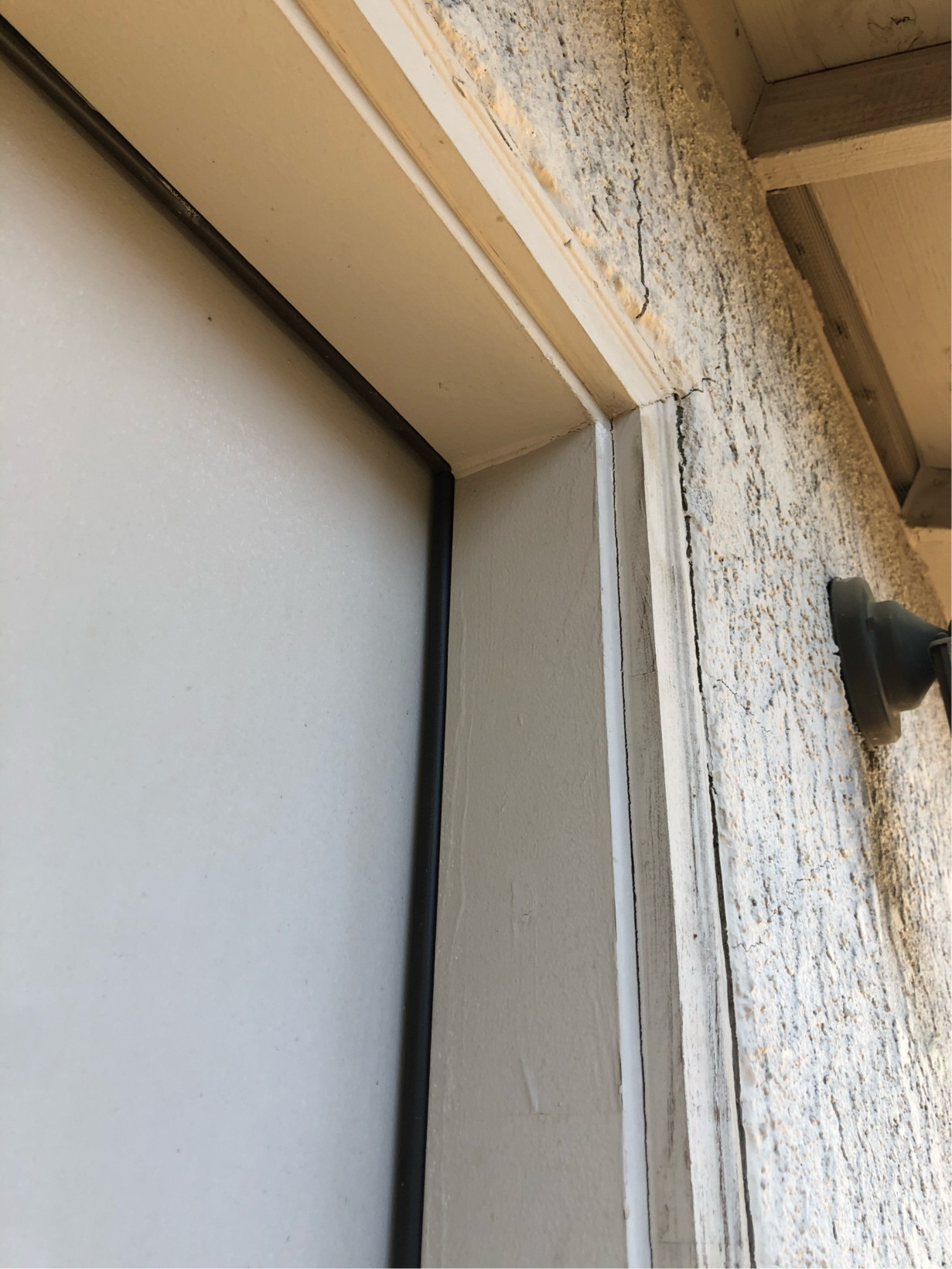 Well, it's hard to say what the underlying cause is for all this. I'd suggest heaving (up) clay soils, but I would have expected that to be an issue in previous years. My next guess would be some kind of change in how much water the soil is holding, but since you didn't have any comments about that, I'll assume you don't have a leak.

All that said, getting a functional door is pretty straightforward. First, pull the hinge pins from the inside. With someone inside to catch the door, have someone shove on the hinge side. Cut about 1/8" off the binding top corner, trending down to zero at the top of the hinge side. (A circular saw with a straight guide clamped to the door will give you a pretty straight cut.) Reassemble the door and see if you can close it. Repeat the cutting if needed.

Make sure you have at least one long (3") screw in the top hinge leaf that goes into the framing. The goal is to have an even reveal all the way up the hinge side where the door meets the jamb. You may need to cut more based on tightening up the hinge.

The deadbolt and the lock strikes probably won't be aligned right. Either buy strike plates that have a taller opening or grind/file out the existing openings to make them work. I wouldn't just move the plates, as this will probably settle down in the future and then you'd have to move the plates again.

Your last set of pictures revealed a little more info albeit, it is not like being there. The issue may be contrary to what I thought possible at first. If there was a roof leak over that door and got into the framing under the stucco, that may have caused the cracking of the stucco. Unless you really did some major shoving on the wall to buckle it enough to crack the stucco by trying to open the door. If that is how the cracks got there, it is better than a leaking roof and rotted framing that is allowing that side to drop and make the door stick.

All that said, my fix will be slightly different than Aloysius'. To remove the pins and push the door through that way may not be possible. I have tried it myself on a door years ago, and the way the pin knuckles are bent, will not allow the hinges to separate like that, unless something gives way that is not supposed to. At least that was my experience. If that does work in your case, that is the simplest way to get it open, AFTER you get the deadbolt retracted, door knob too, to be certain nothing will bind the wrong way and cause damage to the door or jamb.

Onto the fix. Disassemble the knob and deadbolt to get access to the retractable part of the deadbolt and knob. Depending on the brand and model of hardware you have, this will be the best way to get the latches retracted if the spindle on either one fails by trying to turn the knobs/levers with enough brute force to get the latches free of the jamb. If while trying to open the deadbolt and latchset the typical way with brute force and the guts on the inside break up and still leave the door locked, after removing the outside parts, determine what part really draws the bolts back and use a screwdriver or pliers or??(insert the name of any tool that gets the job done here) that will get the bolts to retract. The deadbolt, needless to say will stay retracted, and the door latch, once released, should not go back into the latch... should'nt... This may require a new deadbolt and knob to be purchased, but it beats buying a new door and dealing with the stucco outside.

Once the hardware is taken care of, using a 2X4 or 2X6 or similar, 2' long or so, place it in the upper corner that is sagged and start tapping it with a hammer or mallet which has a bit of weight, maybe 1 lb. or 2 at the most, and the door should drive out a little at a time, since that is now the only "pinch spot". After you have it opened, you can plane down the top corner about an 1/8" to 0" to re-taper the top so it makes a clean gap across the top of the jamb. Or a straight edge and saw is another way to go about too. Sand to ease the corners a little so the corners at the top are not so sharp.

Once that hard part is done, I would grind the strikes so the hole is high enough to allow the bolts to go in easily once again, maybe raise the top edge maybe 1/8" to get this to happen. This is simpler than raising the strikes, although that could be done too, but the lower screw will need to be replace with a 2" screw, since the bore for the bolt will mess with the short screw working.

I'd suggest starting with a prybar (the wide flat style which might be called a Wonderbar® for the same reason adhesive bandages are called Band-Aids®) to lift up or push down on the door to allow the stuck deadbolt to move. Your picture showing the gap smaller at the top of the non-hinge side implies prying down from the top as the more likely direction for that. After that you can use it to pry the door open, if it's still bound, but there may be some damage to the framing depending how hard it's stuck.

Thieves in my college yers aptly demonstrated just how much you can move a doorframe with one of those...

Hopefully the stuck door is not the only thing holding your garage up at this point. Beware of any ominous creaking shortly after you get the door open, just in case.

Not the answer you're looking for? Browse other questions tagged repair walls doors or ask your own question.

2
what parameters should I look for when choosing an electric deadbolt?
4
How far to put a prehung door in a rough opening?
0
Replacement part for glass balcony door
0
Closing refrigerator's door causes freezer's door to stay open
2
Doorknob sticks if door closes hard
0
Mid door knob installation door shut and can’t open
1
Magnetic Mortise Latch for American Style Doors
2
Do I need both contacts to open/close on a centrifugal switch?
8
What to look for when trying to decide on an apartment door?