Help me build this soffit

I need to enclose the shown duct work in a soffit (shown in blue). The ceiling joists run parallel to the soffit and (shown in red). They are 24” spaced and the spot I need to attach the soffit to, doesn’t have a joist right above to secure to. The studs (shown in yellow), are 16” spaced. There is a small, non-structural wall on the left, with HVAC duct running up it, and at the right end, there is a double LVL beam (shown in green).

Soffit only needs to be finished at its face and a little bit at the bottom with a corner bead. Below the soffit there will be kitchen cabinets.

What is the best way to frame this soffit? Ordinarily, I would build a ladder and attach it to the joists above (if they were perpendicular).

I’m thinking, instead building the same ladder with top 2x4 “standing up”, securing it to the wall and LVL at each end, and then running some 2x4s toward joists for the bottom part. I haven’t come up with a good way to do the same on the right side of that LVL beam with the can lights to its right. 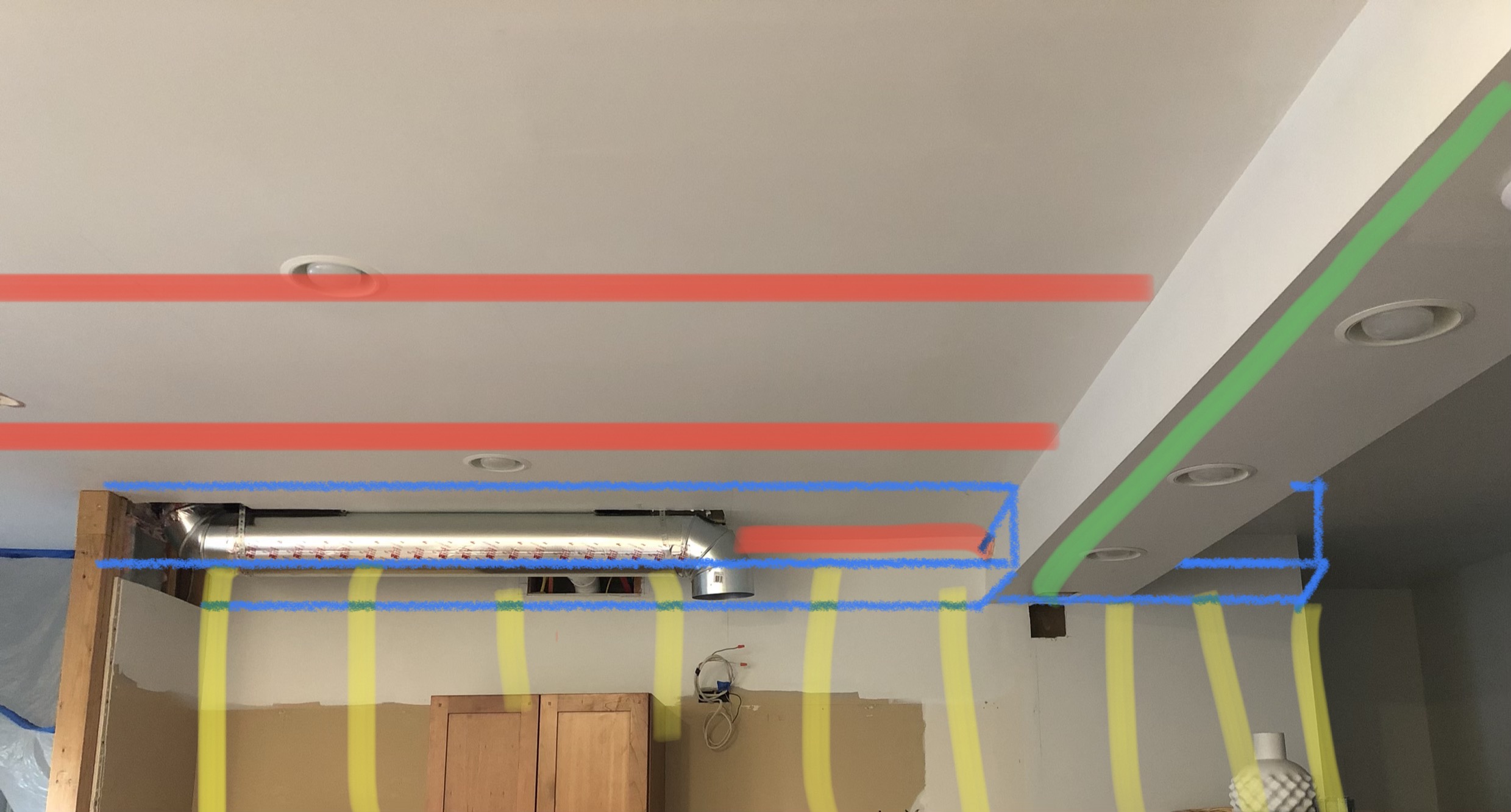 This is how I ended up building the soffit. I decided to write this up as an answer, since there is not a lot of information, including on YouTube, dealing with building kitchen or basement soffits or bulkheads, where the joists are parallel to the planned soffit. Hopefully the readers can benefit.

Step 1. I cut back the existing ceiling drywall to the point where it wouldn’t interfere with the new soffit frame. I made sure that I didn’t cut beyond that, as you want your soffit drywall to butt under, and against the ceiling drywall, and not against the frame above. This way the soffit vertical drywall piece will support ceiling drywall from any possible sagging and will make this joint much less susceptible to cracks.

Step 2. I took the measurements and built the soffit frame on a level floor. First I built the front of the frame using a 2x4 as a top piece and a (ripped from 2x4) 2x2 as a bottom piece. I used the lumber as straight as I could find - a challenge in today’s breakneck lumber production, especially for boards 10’ and up. The ladder "steps" were made with 2x4 pieces at 24” at the center (you could go 16” but unnecessary for narrow soffit). I used long clamps like this, which made it MUCH easier to keep the ladder together while assembling than it otherwise would. I used 3" these decking screws to assemble the whole ladder.

Step 3. Next, I cut some 2x4s at a length that would fit between two joists and "toenail" them with 3” decking screws to the joists in a perpendicular fashion.

Step 4. Lifted the assembled front of the soffit, and attached it with the same decking screws to the 2x4 braces I toenailed to joists earlier, as well as the side walls.

Step 5. I attached the second piece of 2x2 from that ripped 2x4 with 2x4 ladder "steps" to make up the bottom of the soffit.

Step 6. Hang drywall as usual using drywall screws, tape the joints, install a corner bead (a lot of people use vinyl beads on soffits, I just prefer metal ones), mud, and finish.

I left the soffit on the back open (no drywall), as new kitchen cabinets, as well as the trim (still to be installed), would fully cover the opening. Had I had no cabinets, I would additionally screw the bottom of the soffit to the studs on the back wall and run the drywall all the way to the wall. In this instance it was unnecessary, and besides, I had a range hood vent hanging behind it. 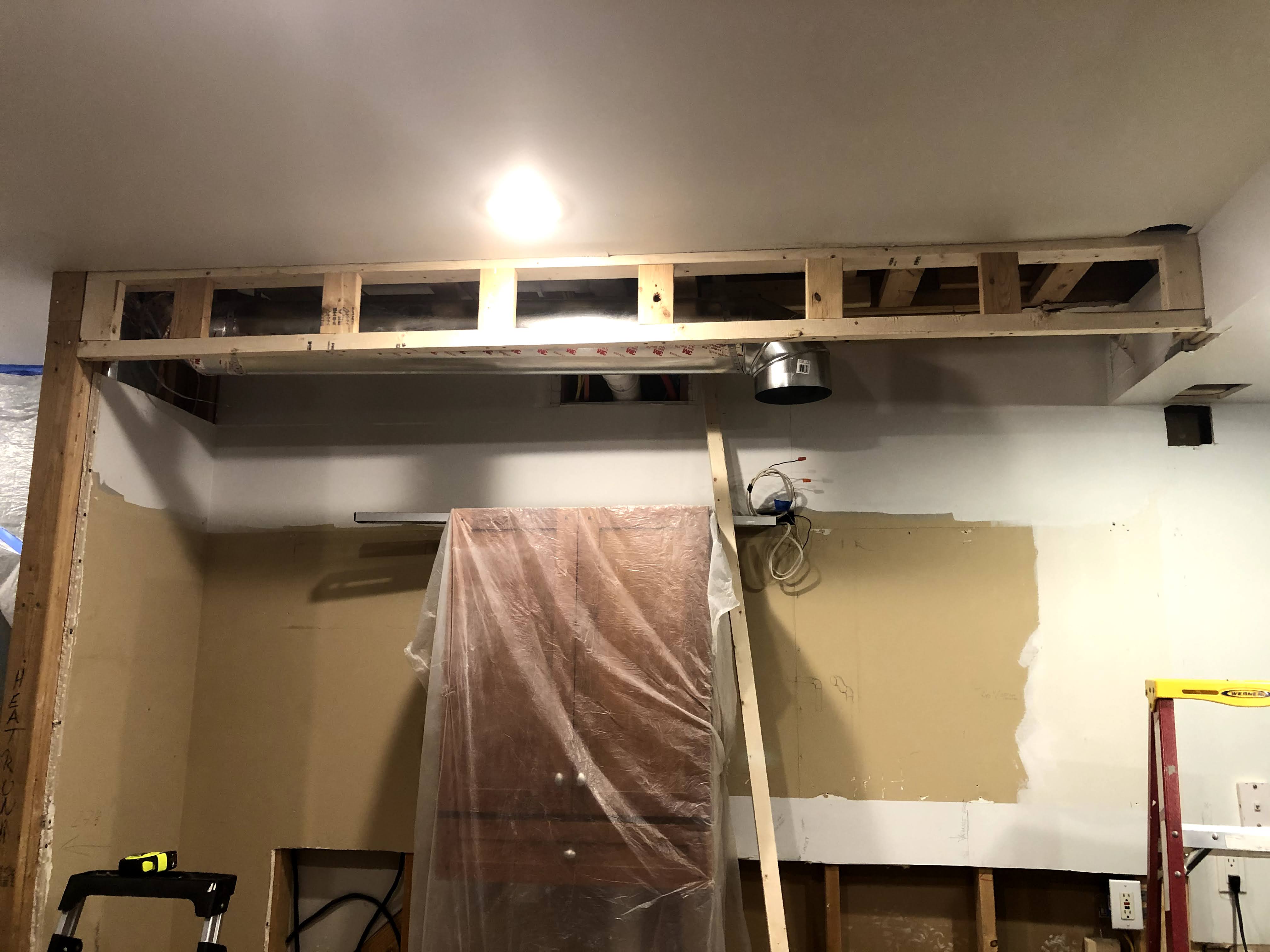 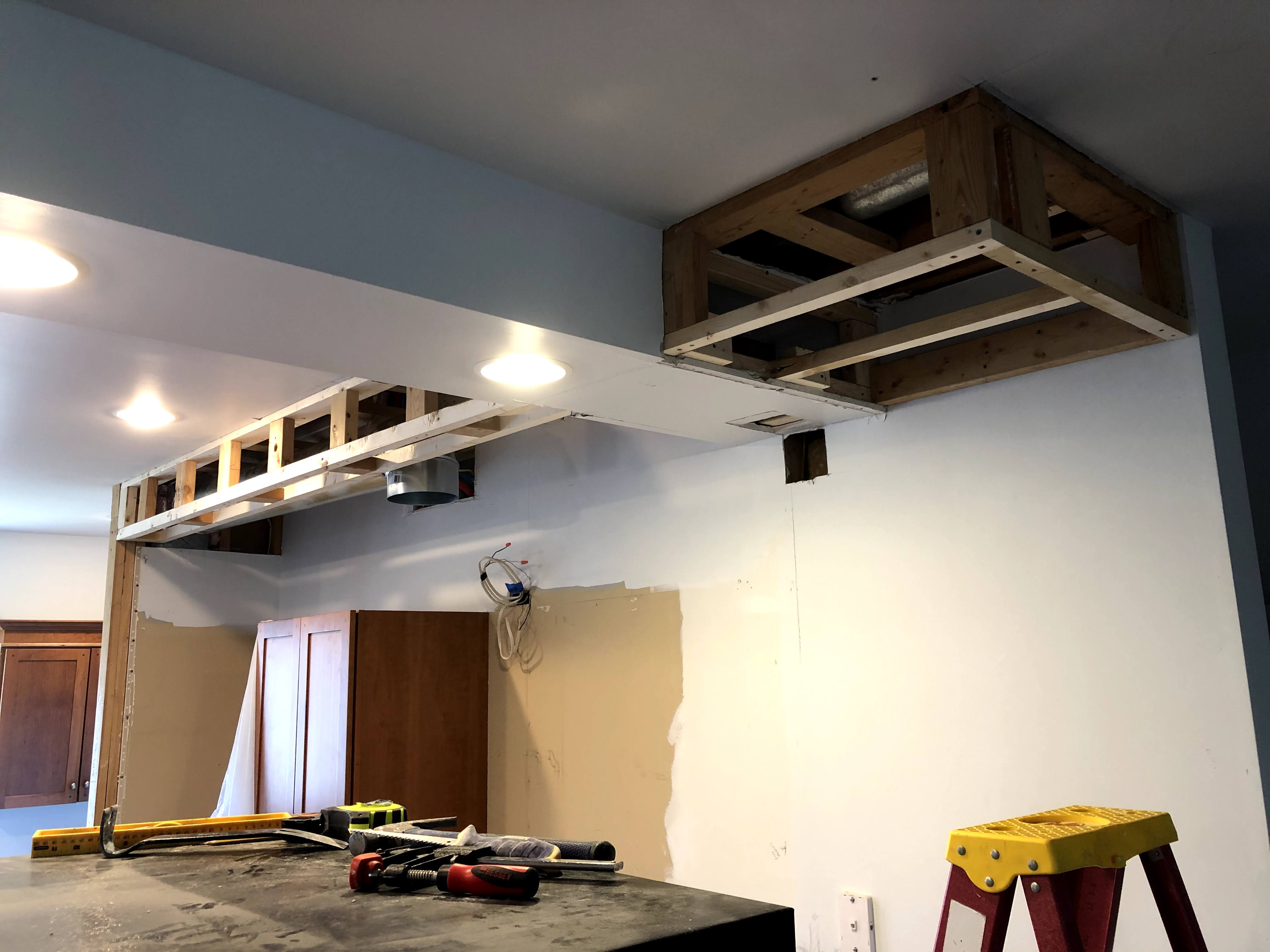 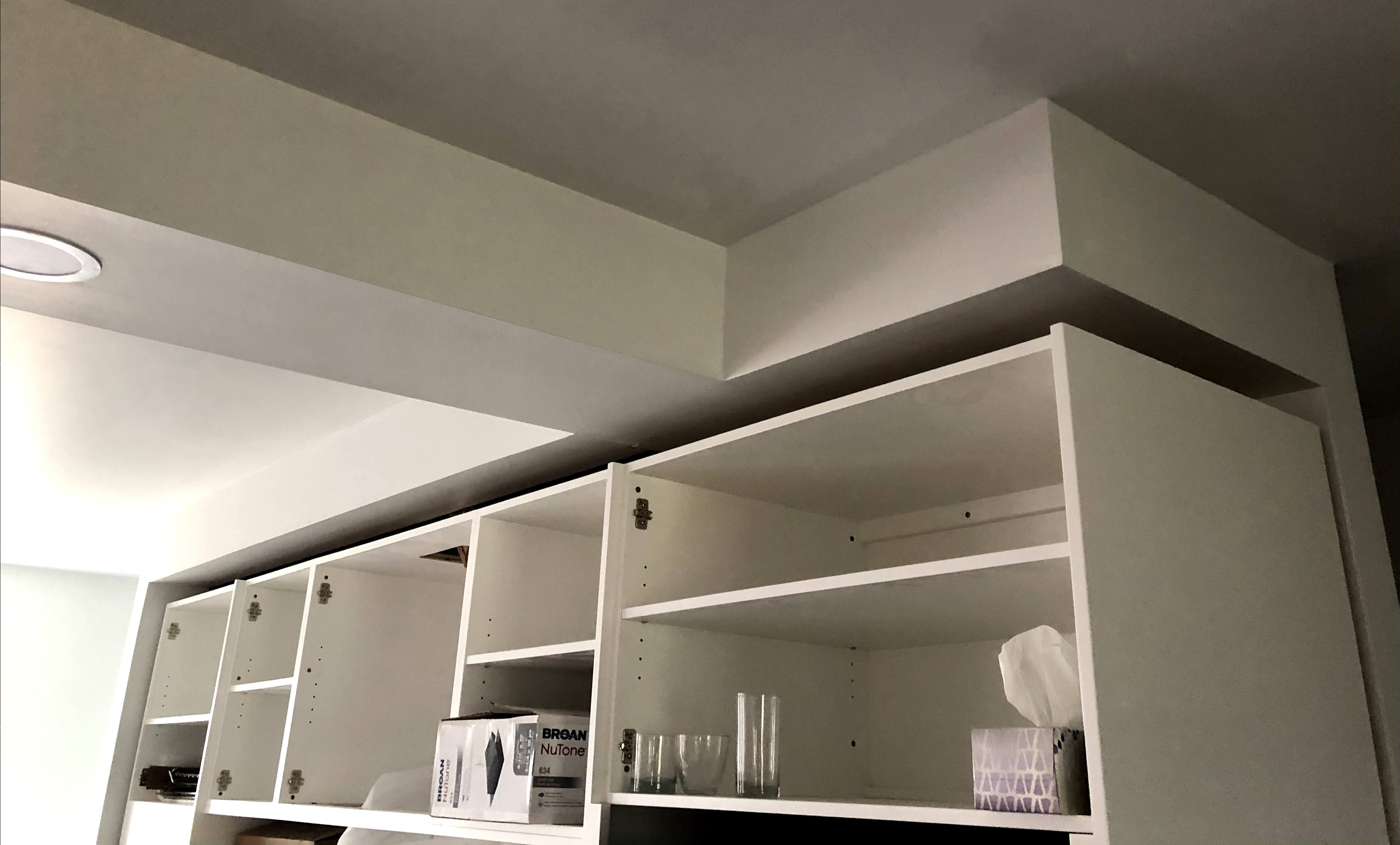 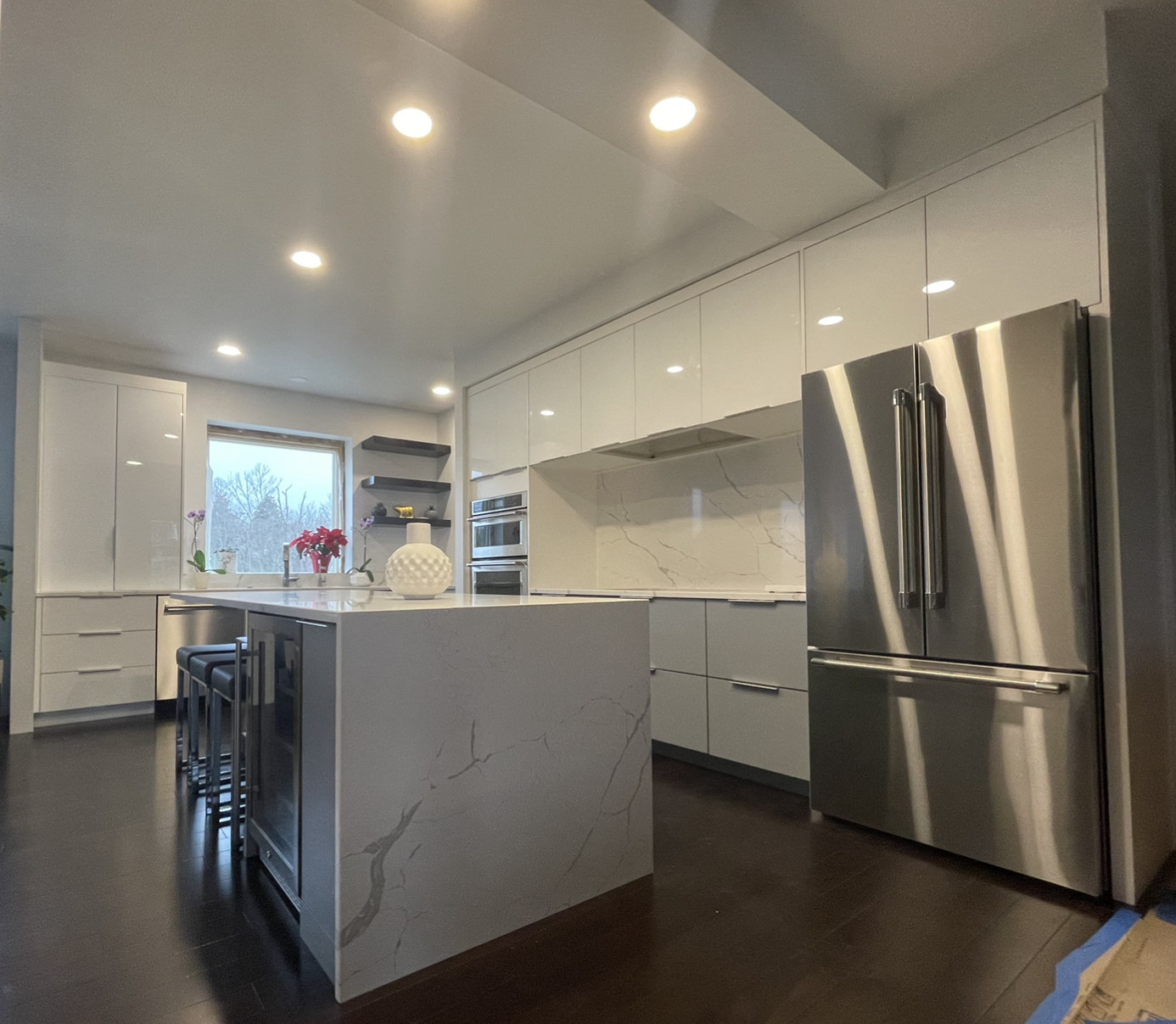 I like to use OSB for soffit walls. I'll run a 2x2 rail on the ceiling, hang an OSB strip of the appropriate height, and attach another 2x2. Add a 2x2 at the wall and drywall it all. This way you're not relying on end-grain fastener pullout or shear strength in drywall. Everything is in shear except the screws up into the framing, but they're cross-grain and will not let go.

There's no need to cut back ceiling drywall for a soffit unless you have to add backing, but even then you just cut access openings. Use screws long enough to penetrate the framing above at least 1-1/4" and it'll hang solid.

Measure what you need and go to the home depot or whatever and have them cut some OSB. they have those big saws that will cut the pieces nice and straight, and I think the first like 3 or 4 cuts are free.

then just a matter of hanging it.

Not the answer you're looking for? Browse other questions tagged framing soffit or ask your own question.

1
Should I run cable through an always damp crawl space or a dry soffit in the living area?
1
How to build a wall under duct work
1
Removing a wall underneath joists that are already attached to beam in attic
1
Boxing out floor joists when using 11-7/8 I-Joists?
0
LVL Span Ratings and Beam Placement
3
Can I use blocking between floor joists to support off-center jack studs in a load-bearing wall?
1
Framing around PVC pipe