I am trying to install thin LED recessed lights in my hallway. I need to remove the old ceiling box, as shown in the picture. I tried to remove the box for the whole day but was unsuccessful. I cut the drywall around it ad is sure that it is not fixed with a joist or anything.

I removed the punch knockouts and found that the whole ceiling box was connected to three conduits using the connected, as shown in the picture below. The conduit brings in the wire for a three-way switch system to the said ceiling box. There are the big nuts that are tightly screwing these conduit connected at the backside of the box.

Please give any suggestions as to how to remove the box. I still want to use the same wiring so don't want to damage the conduits or wires coming out of them. 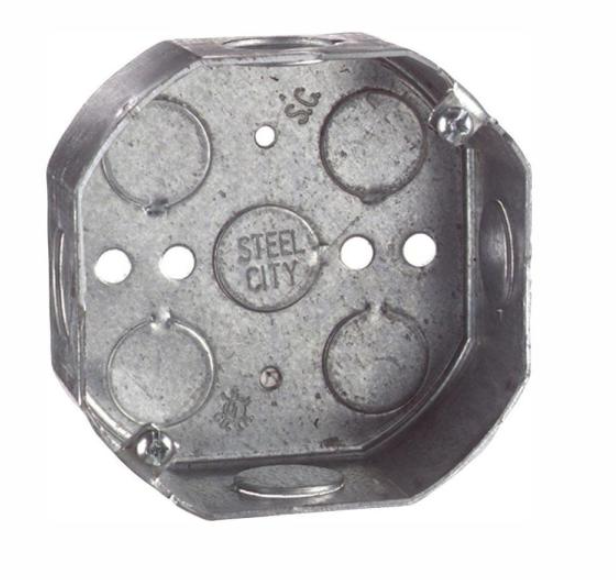 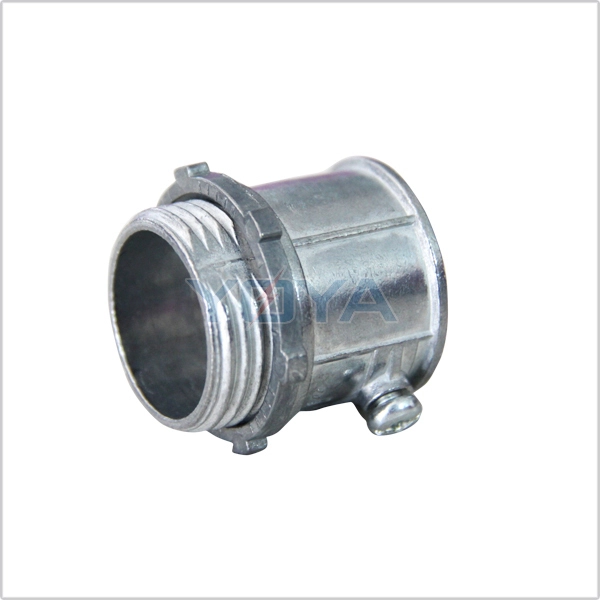 The existing answers are correct in that you should not, in all likelihood, be attempting to remove this box or the wiring or the conduit.

However, to actually answer the question you asked, since there are occasions to actually remove and replace a box*

The nut that is visible inside the box on the cable clamp/conduit nipple is a standard righty-tighty, lefty-loosey nut. Usually, you thread the nut on to the nipple, tighten it by hand, then place blade an old flat-blade screwdriver against one of the notches sticking up on the nut tap it with a hammer to tighten it down. To loosen it, simply tap in the opposite direction (turn it counter-clockwise). One or two taps should have it loose enough for you to then turn it by hand to back the nut off.

Tap in the direction of the green arrow to tighten and the red arrow to loosen. 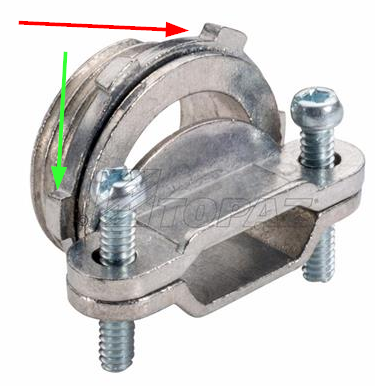 Image courtesy of topaz-usa.com. First small image I found for what I was after. Arrows are own work.

Again, unless you are completely removing the circuit, make sure you replace the box when you're done. All wiring connections must be made in an approved box.

*Valid times to remove/replace the box include replacing a light-weight ceiling fixture (mounted to a standard-duty box) with a ceiling fan (mounted to a heavy duty, fan-rated box). Also, when adding a circuit, you may exceed the legal fill for a box, so may choose to replace the box with a larger/deeper one. There are other times, these are just 2 examples.

Removing this box is not a good solution when there are rigid conduits bringing wires into this existing box. The main reason for this is that those wires would still need to terminate into an accessible junction box. On top of that there is just no simple way to adapt the existing rigid conduits for connection to the floating connection box on a recessed fixture.

This may be a doable project IF:

The practical way to deal with this is to keep the existing ceiling boxes and install new surface mount LED fixtures. If you insist on the recessed fixtures then you will need to cut new holes in the ceiling for those fixtures near the existing electrical box and then run new flexible conduit from that existing box over to the recessed fixture floating connection box. If you choose this latter route then just purchase suitable flat white cover plates for the existing electrical box. If the ceiling is a different color the flat cover plate can be painted once installed to coordinate with the ceiling.

Since your project is this light, you are assuming the universe is gracious enough to have ALL the wires in these conduits be ONLY about this light. That is a faulty assumption. There could be other circuits you don't know about; your plans could break them.

Now to start with, nobody uses conduit for their health. They use conduit because it's legally required in the situation they are in - commercial building, local requirement, etc. So when you see conduit, expect it's a requirement.

However, conduit is easier than you're making it. You just need to learn the craft of it. It might not actually be that big a deal to run conduit from this box to your planned lamp location. You could demote this box to simply being a splice box and serve the new lamps from here. Use a blank cover plate and also put 10 cent covers into the holes you erroneously knocked out.

Keep in mind every splice, tee and sharp corner need to be at a junction box, and the box cover must be accessible forever.

Not the answer you're looking for? Browse other questions tagged light-fixture ceiling led recessed-lighting old-work or ask your own question.

0
Replace light fixture ceiling box between levels
1
Is this ceiling box wiring correct and how can I reconnect an abandoned 3-way switch to it?
4
Old Work Box for Vanity Light?
6
garage light with two hots and one neutral
1
Vanity light installation using an old work box
1
Remove ceiling lamp holder to change light bulb
0
I have an old light fixture in my bathroom with no visible screws; how do I remove it from the ceiling?
0
How to fix broken screw hole in ceiling box? (re: ceiling light fixture; how to replace the box?)
0
Can I move a joist a few inches left without the ceiling falling on my head?