Are these drywall screws properly driven/countersunk?

Related to this question. Even though I might be cluttering up SE with questions about driving drywall screws, I feel they will ultimately be helpful since I have been unsuccessful in finding images of properly-driven drywall screws. Plus, it's a good thing to know how to do properly. Now onto the content of my question:

Today, I talked to the superintendent of the company I hired to hang drywall on my ceiling and addressed my concerns about the improperly-driven screws (see link to other question above). I had already addressed this concern twice before, but I was assured that there was nothing to be concerned about, that they have done thousands of homes like this and have never had any problems. This time, though, I pushed a little harder and I think I struck a nerve because now the superintendent, project manager, and one of the workers are coming out tomorrow to "see what they can do" about the contract.

Feeling guilty about criticizing the quality of their work and in spite of all the support I have gathered from SE members, I wondered if I was wrong about their screws being driven improperly. I decided to break out a spare length of 2x4 and some scrap drywall I had laying around and put a few screws into it using my own drywall bit. The results, in my opinion, look great. I actually believe I drove these screws the way any true professional would. No paper was broken and no torn fibers are exploding out all over. It looks neat and crisp. The heads recess into the surface and there is no contact when I scrape a putty knife across the sheet. When they come tomorrow, I want to show them this sample piece I put together and hopefully let it serve as a far better example of how drywall screws should be driven.

If I can get some feedback on my drywall-driving skills, that'd be great. 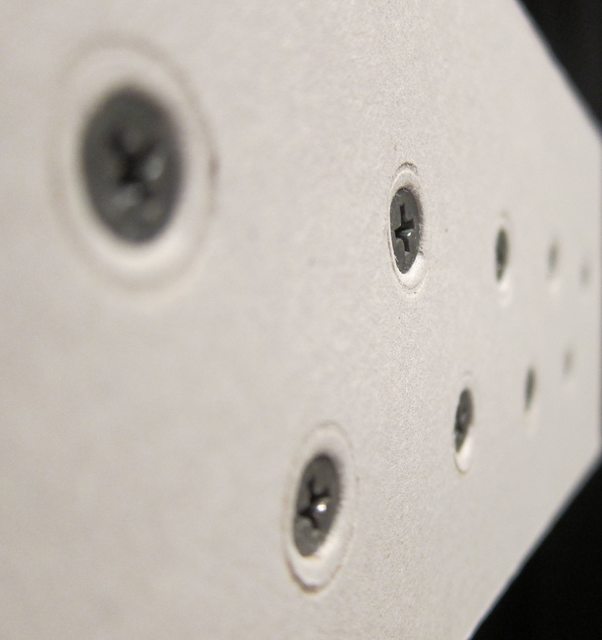 Yes, that is the proper depth at which a sheetrock screw should be driven. The rock is dimpled with enough of a pocket to hold the compound, yet does not weaken the board

They look great to me and I've done my own for years.

11
Are these drywall screws driven too deep into the sheet?

3
Kitchen Cabinets And Dry Wall Screws
7
What is the weight capacity of your typical 2 1/2“ drywall screw when driven 1 1/2” into a stud?
11
Are these drywall screws driven too deep into the sheet?
9
How can I drive a screw with an impact drill?
2
1“ S-Type Screws OK for hanging 5/8” Drywall on short wall in basement?
2
Setup for attaching drywall to metal studs
0
What are these screws called?
2
What kind of screw is this?
0
Hanging dry wall on mass loaded vinyl - can I glue and screw
0
Better screws to mount shelving standards