A type of compartment that rises out of a desk

I'm building a computer desk and I had the idea to hide some speakers in a compartment towards the back. I'd like the speakers to pop up out of the desk on some kind of mechanism that rises up, kind of like an old top loading VCR, maybe something hinged at the back. I'm fairly mechanically minded, but I'm struggling to imagine a way to make something like this that doesn't need visible handles and I'd love it if I could open the compartments by pressing on the top and having it open at least a small amount. I know this is a long shot, but are there any products out there that could help me achieve this? I genuinely have no idea what search terms to use.

Search for "Lift up" hinges. These will let you lift up a section of desk to reveal something underneath, but won't let you click in the desk to lift it up. For that, you'll want push latches.

I'm not quite sure how well those will work in combination. As a fallback, consider some kind of recessed handle. (There's a bunch of options out there.)

To hold it up there are cupboard door stays used in motorhomes/caravans (RVs etc.). Here (eBay) are some I've used. They're just a spring in a tube, and aren't all that string, but should do this job. They're often used together with push latches.

If it's very heavy, look for small gas struts (a smaller version of those used in car boots/trunks). You'll want a good idea of the weight and geometry when you select them - so perhaps get the cheap spring ones first even if they up up being a prototype.

Another effective latch can use magnets, specifically rare earth magnets, and easiest to use the sort with a counterusnk hole. You'd need and arrangement such that the magnet pair, or magnet plus steel bracket came into contact when fully open. Note though that it may be prone to slamming shut once the magnet force is overcome.

These both assume a hinged arrangement, rather than a vertical lift. For the latter I'd look to a scissors mechanism but getting the parts could be hard (Meccano?). Latching down would be easy - gravity, but up would require something customised. If I went that far I'd motorise the scissor lift on a leadscrew made from M6 studding, under computer control of course - but I do a lot of hardware interfacing for home and work.

A further variation, inspired by some pop-up headlights on old sports cars, is for the section of desktop to hinge at the back (or lift vertically, but I think that lack of a flat top is a good thing because I'd put stuff on it) and for the speaker to hinge at the front, set slightly lower. A leadscrew or servo would tilt the speaker up, and that would push the lid up.

There are purpose-built products out there that are designed to do this.

Hard to show an example without it coming across as a recommendation, but you may want to explore something like this: 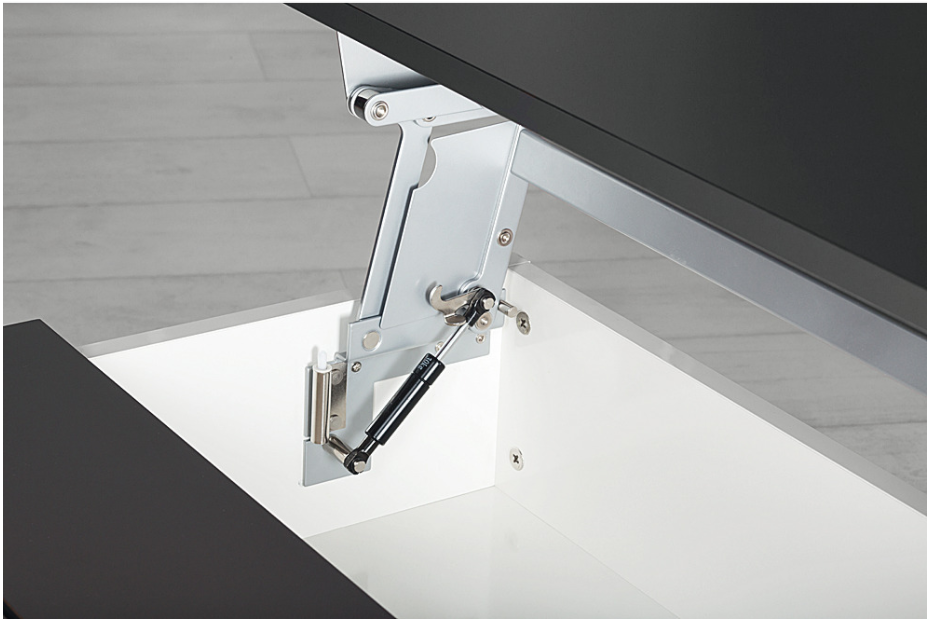 To stress, this is merely an example and not a product recommendation.

For my money, I think I'd save myself the frustration of trying to get something acceptable from a combination of push latches and lift-up hinges. Something purpose built is much more likely to "just work".

Nice idea. How about making a tilt-top cubby at the back of the desk?

Threaded rods turned by a toothed belt pushing up two speakers - the speakers are prevented from rotating and the rods act on bearings.

There are ready made desk items search Google for "pop up desk cable hidden". You could either modify one or may be able to buy an empty one. 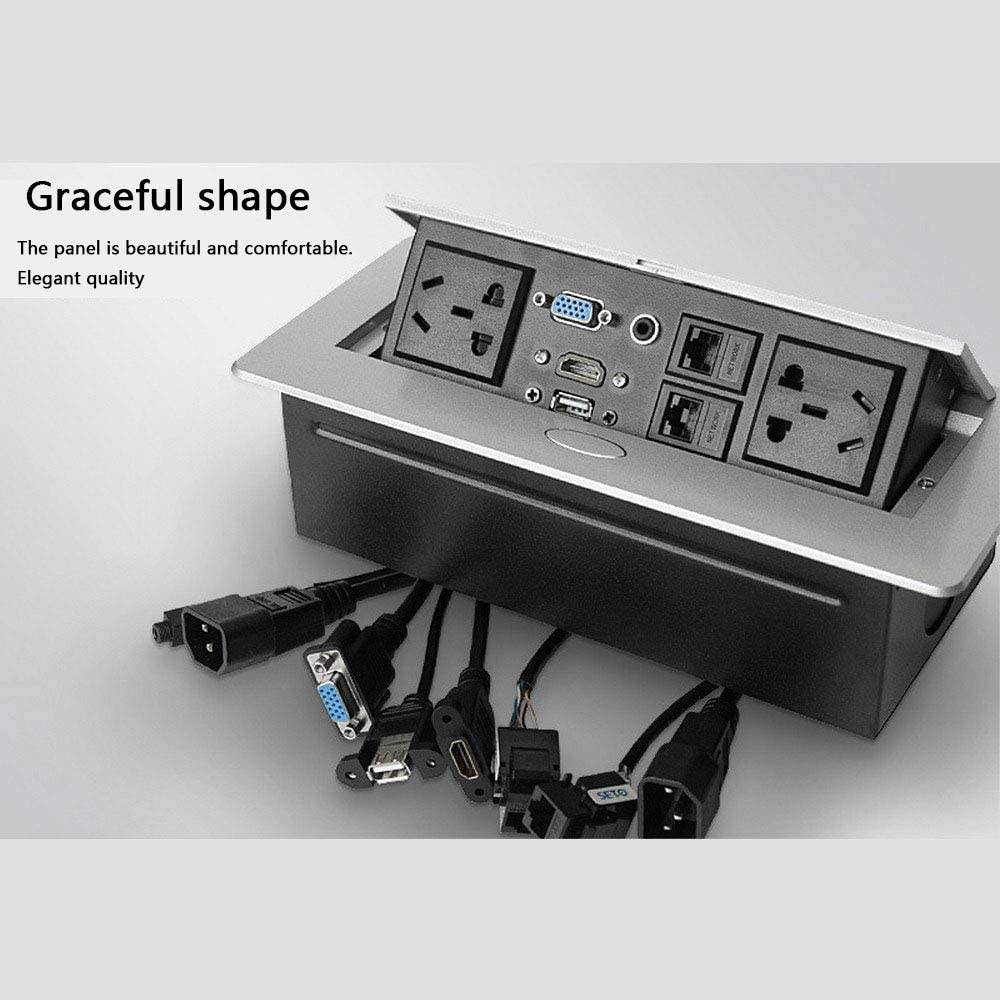 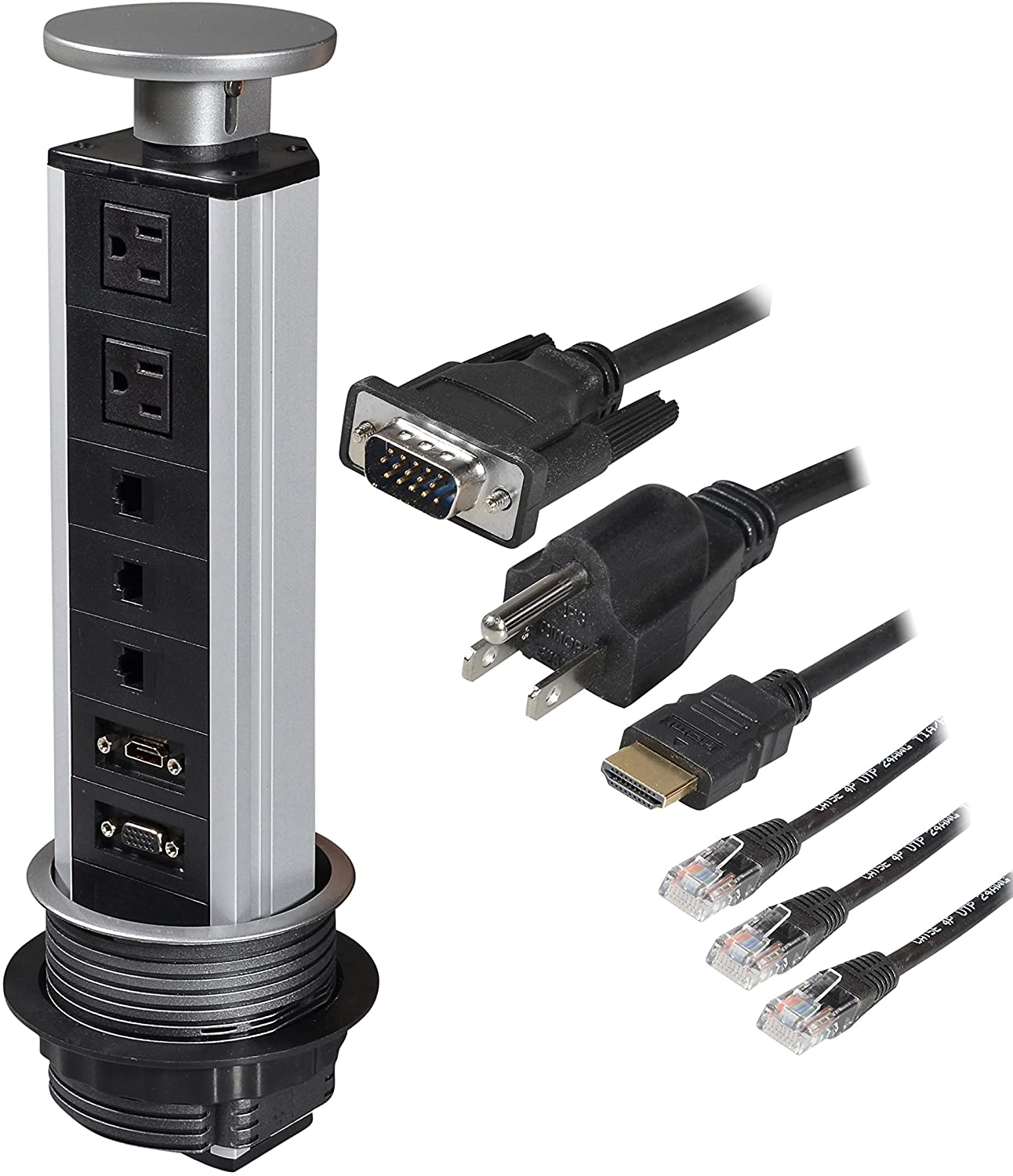 Look for "push latches" - often used for loft/attic-hatches, or for kitchen cabinets. The latter is relatively common - cupboard doors with no handles.

Not the answer you're looking for? Browse other questions tagged table drawers terminology or ask your own question.

1
How can I install a kitchen drawer with only one side and no front beam?
3
What could be causing my kitchen drawers to be sliding out?
1
How do I remove a drawer from Whitney desk (Pottery Barn)
0
Steelcase desk drawer stuck in unlocked position
1
Extending a narrow high kitchen table with lateral side-wings
8
Polaris type electrical connectors terminology
18
What are wrenches called that are just cut out of steel flats?