Fix wall near bottom of staircase 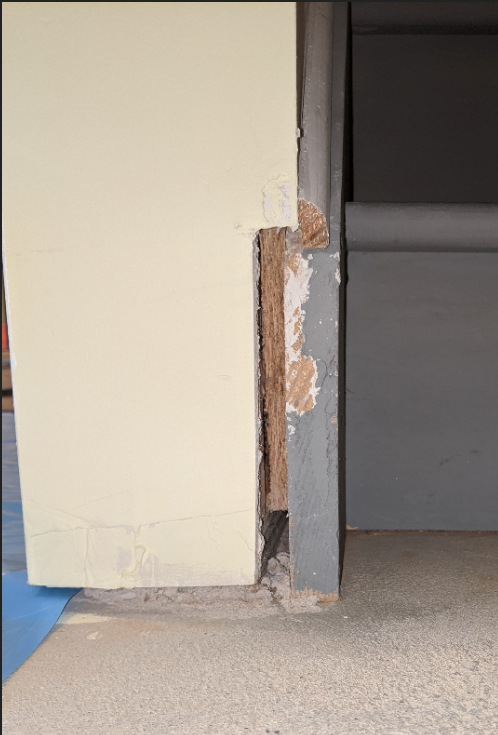 Above is a picture of the wall adjoining the bottom of the staircase leading to the basement.

I am finishing my basement (in the process of flooring/molding etc.). I intend to use baseboard, then quarter round after the flooring. The builder has left the portion of drywall as in picture.

What are my options to finish this so I can paint/apply baseboard, etc.?

I would cut a thin strip of drywall to fit that missing section. It will be a little awkward because it's thin and long and therefore easily breakable. Cut it from a piece that has a finished edge to help hold it together. That edge should face the door frame. Because it's so narrow the best way to fasten it in place will be with construction adhesive. You may have to support the strip from behind to get the strip level with the existing drywall. Scrap cardboard should do the trick.
When mounting the strip pack some spackle between the strip and the drywall. The reason you want to do this is because the repair will be too narrow to tape and the packing will help keep the spackle from cracking.
Smooth any excess spackling and hold the strip in place for a few minutes to let the adhesive set.
You can then finish the job with additional spackling and sanding as needed after the adhesive has set firmly.

That looks very much like there had been some baseboard there that either wrapped around the wall and returned into that gap, or perhaps there was trim on the stair stringer that wrapped into that gap.

I'd suggest that the easiest way would be to replace that with a new piece of baseboard that will fill the gap. Of course, this means that your new baseboard would have to be this tall.

Another option would be to put a small piece of wood in that spot to "widen" the apparent width of the stair stringer. It's hard to tell from the image provided whether the stringer (and quarter round above it) sticks out beyond the wall board, or if they're flush.

If they're not flush, install a piece of the baseboard trim running uphill with the stringer, and a piece horizontally with the drywall. This will likely fill most, if not all, of the gap.

Nail a piece of 3/4 tall enough to meet stair base, but use a jig saw to drop it down to 5 1/4 or whatever your base is. Cap it accordingly with 1/4 using 45's to match the custom base, and reverse 45 to do a corner for the 1/4 cap on stairs, sand it to match the shape - If you don't plan on using a cap on your baseboard, then back 45 it at the left corner to kill the look in a finished look

Not the answer you're looking for? Browse other questions tagged drywall patching-drywall or ask your own question.

8
Can I install drywall on the ceiling, without removing crown molding?
1
Ensure smooth drywall surface around stone mantel
1
What wall cladding should be used along the floor of the garage?
1
Covering lead-painted wood paneling with seamless transition to drywall (1/8'')
0
Too Much Mud Leveling over New Drywall?
0
Drywall suggestions
1
Installing Trim for new Vinyl Plank Flooring
4
How can I attach drywall directly to cinder blocks without using furring strips?