My electrical panel is in the garage, which is drywalled. There are some available knock-outs in the side of the panel wall and this is mounted between the supporting studs. I want to pull the metal plug out, drill through the 2x6 and run 4, 6gauge wires to a 50 amp 4-prong plug that will be mounted in an external metal box directly beside the panel.

My questions are this:

Can't do that, regional variations are not going to allow that much of a basic violation of standard practices in any region where NEC/CEC applies at all.

You need a chunk of conduit here. If it's steel conduit, you can have 3 wires instead of 4, since the conduit is the grounding conductor in that case.

You can use an "old work" box in drywall, but I would not advise doing that with a 50A receptacle/plug given the forces involved in plugging/unplugging those monsters. Surface mounting a box on the face of drywall is unusual to say the least, and would still be a problem from the plug-force point of view. You could screw a board into the studs and mount a box on the face of that, but it would be cleaner (given that your panel is flush-mount) to just remove a chunk of drywall, drill your hole, install blocking between studs to mount a box, install your conduit and box, replace and patch the drywall, and have a flush receptacle solidly mounted.

If you were planning to drill through the stud from inside the electrical panel, that's a Very Bad Idea and I suggest you think about why that might be and then not do that.

The wires between the panel and the box must be part of an approved cable (NM, UF, SE, MC) or run through a raceway.You need fittings that secure the cable or raceway to the penetrations in the box and the panel, which means you can't remove the knock out and drill through that hole because the fittings are larger than the knock out.

The general procedure would be to cut out a piece of drywall, from that hole drill a +/-1.5" hole in the stud lining up with a clear knock out. Install a horizontal piece of 2x4 between the studs, set back the depth of the box. Fit a short piece of EMT with fittings or cable with fittings through the stud, then fit the box to the emt/cable and attach the box to the stud. Then patch the drywall.

It sounds like you have a good plan. A few adjustments will make it easier and safer.

Connect conduit to the load center

Make the hole you drill in the 2x6 stud large enough to connect your conduit to the load center. If you need to, come out of the bottom or top of the load center instead of the side, and make a bend, instead of going straight out the side into the stud.

Given the scope of your project, go ahead and cut out some drywall and mount the box to a stud, or add a small piece of blocking between two studs if you need more flexibility in locating it.

This allows you to enter the box from the side instead of the back, and gives the box a more secure mounting.

A drywall patch kit from your home improvement store will help you clean up afterward. You don't have to buy a whole 4x8 sheet of drywall; they sell small pieces just for this type of job!

Do not drill the hole from inside the electrical panel. Aside from the risk of shock you won't be able to properly secure a clamp into the knockout. Cut out some drywall and drill a hole towards the panel larger than the knockout.

You can and probably should run 6 AWG MC as the head of the connector will snap into the knockout compared to the regular clamps for NM cable. Additionally you probably don't want an unprotected 50 amp cable hanging out behind your drywall. It might not be you but the next owner of your house may decide to put a screw in that wall so MC should be used. 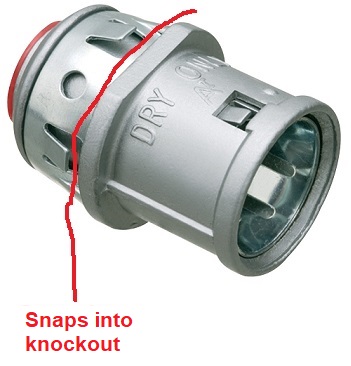 Not sure if these are up to code but they sell knockout bushings which would protect NM cable from the sharp edges of the electrical box. See below: 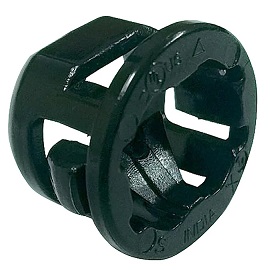 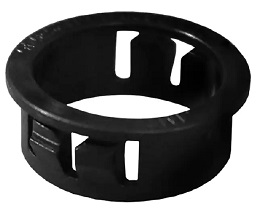 If your stud is already exposed then don't forget the nail plates! 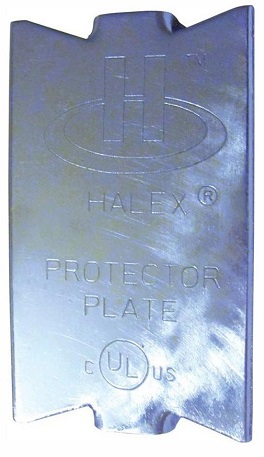