I mocked up some cable runs and was hoping someone could confirm that they don’t break any NEC2017/2020 rules. The wires are run along the rim joists on the upper edge of the wall right under the basement ceiling joists. The staples will be used every 3 ft. The wall itself sticks out perhaps 1” inch past the rim joist wood. This is the main reason I am looking for guidance.

On the very top I have a 6/3 and an 8/3 wire going supported by appropriate size staples to the ceiling joists. I believe these are OK to run without any support boards due to their size.

Question 1: In the middle I will have 8 NM cables run the same way the sample one is, filling every slot of the staple (the staple is rated for 8 12/2 cables). As you can see, part of the staple is sticking out past the wall by about 1 inch. It doesn’t touch the nearby heating pipe, but overall, is it OK to stick out like that or will that fall into “physical damage” category of the code?

Question 2: On the bottom you see two BX cables which are secured by special stack-able staples. The staples are rated to be stacked, however the outer staple also sticking out past the wall by 0.5-3/4” inches. Same concern – is that OK as far as the “prone to physical damage” NEC portion is concerned?

Many thanks in advance. 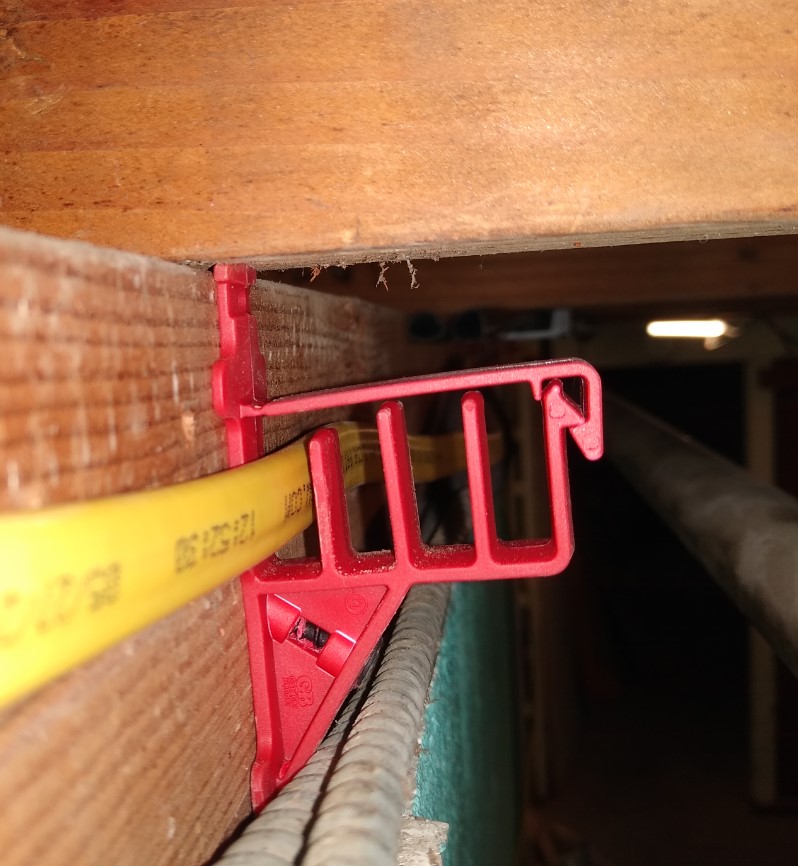 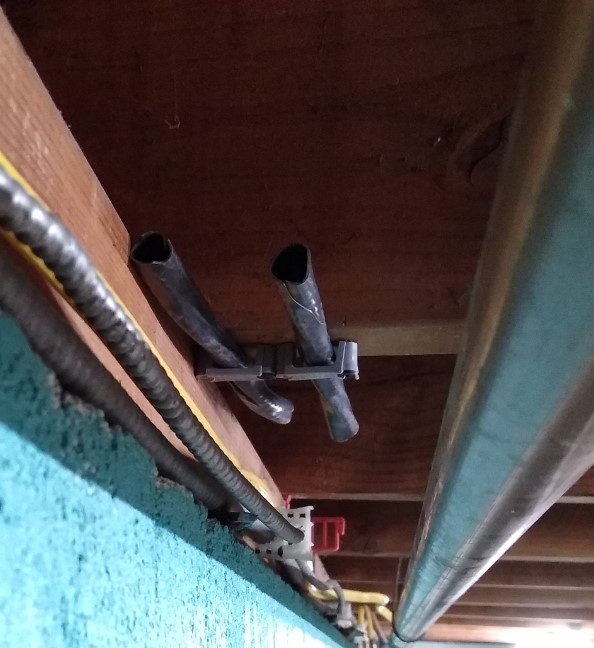 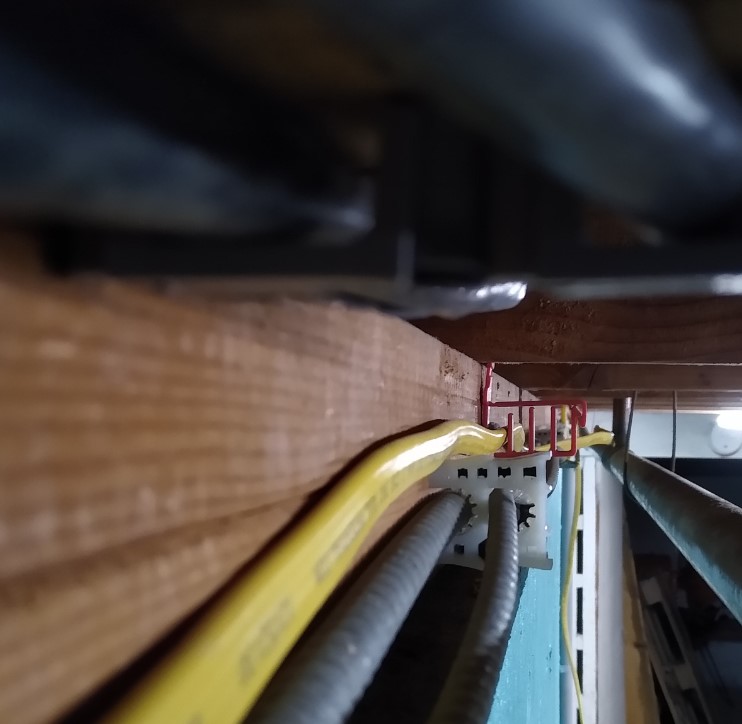 The height is usually the issue in a basement 8’ has always been ok but code really doesn’t have a height if on the ceiling or crawl space there is no minimum height. I have worked with inspectors that were ok with 7’.

My opinion would be because this is above a pipe it would not be an issue.

With that said at my current location I was doing some fairly extensive permitted work and I had just moved to this county and the inspector did not know me and was being a real jerk actually making things up that were not code.

I asked him for the code references and and pulled out my hand book.( He was not going to sign my permit off before that) when I gave him my license number he said well that’s the way I like it And he then signed off on the job.

Some inspectors are real jerks to home owners. If the height is above 8’ it should fly without problems. Below 8’ it might be an issue. But it should not be.

I might suggest to have enough slack to rotate it up to the floor joist if he flags it. a strip of plywood as a backer and put it there would be code legal even if below 8’. Your location is better in my opinion because of the stronger wood the clips are attached to and the pipe is also protecting the wires.

Not the answer you're looking for? Browse other questions tagged electrical wiring joists nec or ask your own question.

3
Help running ethernet between floors, with double joists in the way
0
Can I run NM 12 ga circuits on a running board or MultiCable Staples across floor joists use in a basement with an unfinished ceiling?
2
Leveling joists for drywall installation
2
Running wire through ceiling, ceiling joists blocking access to the top of the frame
0
Running cables for a home theater: inside walls and ceilings or on the surface?
4
what is a "running board" for attaching NM cables perpenticular to floor joists in an unfinished basement?
3
Stapling NM cable to panel backboard on the side of the service panel. Any NEC 2017/2020 concerns?
0
Trying to understand "smaller" in 334.15 Exposed Work and across joists
5
Should I repair or replace floor joists with holes in poor locations?